Digital photography is great.  No, it really is.  Fast autofocus, variable ISOs and the chance to correct mistakes in post quickly and easily. So, what’s not to like. Well as the late, great Gerry Rafferty once didn’t sing: “These digitals make you feel so cold, they’ve so many pixels, but they’ve got no soul.” Truth be told that’s how I feel about digital imagery sometimes. Just as I can’t do without my morning coffee, I really can’t stop using my DSLR (it’s too much easy fun), but what might I use to help locate a bit of soul?

Well as luck might have it, a few months ago I chanced upon an old box camera in the window of one of the last old-style camera shops in Edinburgh. The camera was labelled “Gevabox” and looked absolutely nothing like a modern camera. Intrigued, and unusually having a little available cash, I splashed out. It’s been a decision I have not regretted.

Reference to online resources will tell you that there were probably three versions of this camera.  The first, made about 1950 looks more than a little like the Adox 66. Indeed, given that both were made by the same German camera manufacturer (Herman Wolf GmbH of Wuppertal), it is entirely possible that the first Gevabox is just a rebadged Adox 66.

The version of the Gevabox I own was manufactured from 1951 until about 1955 also by the same alliterative Wolf of Wuppertal. As with the earlier model, they were sold by Gevaert, a Belgian photographic paper manufacturer that wanted its own line of cameras. Made of metal (the earlier version was bakelite), it has a few controls for adjusting the photographic process.

It has three aperture settings, (f8, f11 and f16), which are changed by rotating the dial at the bottom left of the lens. The aperture alters as a result of three different metal diaphragms with holes of different diameters being individually rotated in front of the shutter.

Basic, simple, and pretty much fool proof.  To the right of the aperture setting is the shutter speed control. This can be set to either “M” or “B”.  “M” would appear to equate to a shutter speed of roughly 1/50th of a second, whilst “B” (presumably for bulb) unsurprisingly stays open as long as the shutter release is pressed.

The shutter release situated on the side of the camera has a screw thread for inserting a cable release. However, be warned, your cable release needs to be able to extend a decent length to operate the shutter whilst also needing to be able to exert a reasonable force. This has caused me all kinds of bother, as I’ve wrecked a couple of old cable releases by being a bit too vigorous with my pressing. In addition, not checking out another one prior to going out, caused disappointment as it transpired it didn’t extend far enough. (You’ve no idea how difficult it was to write this without sounding even more like some smutty adolescent.) 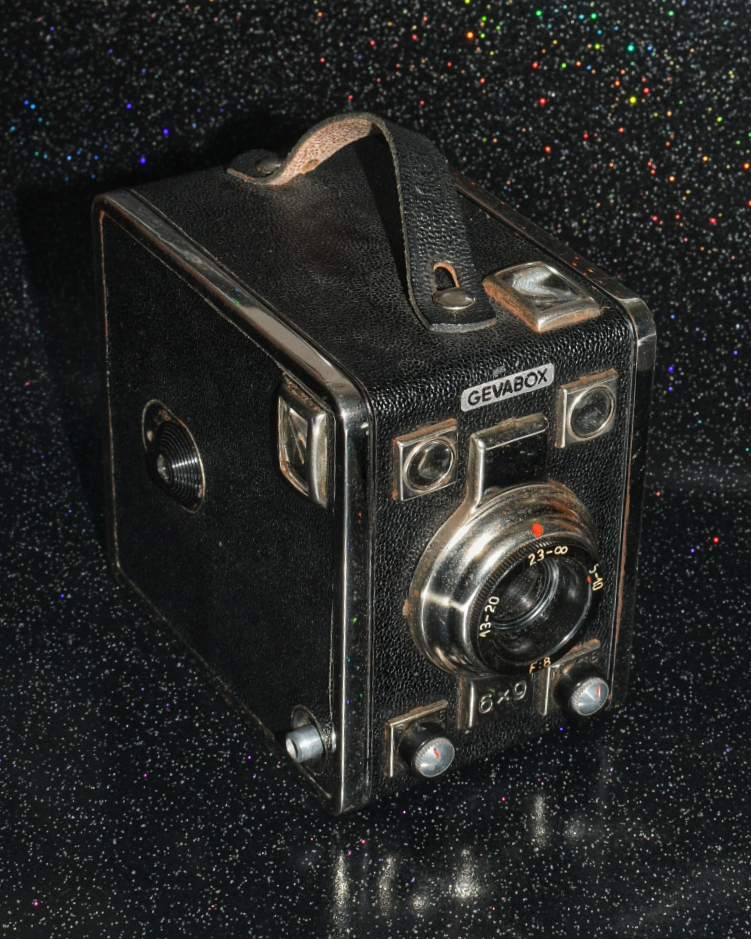 There’s also no lock on the shutter button, so it would be easy to fire the shutter when putting the camera into a pocket or bag. To date, it’s only luck that has prevented me from taking double exposures and blurred images of the inside of my rucksack. Having now acquired a “case” (in truth nothing more than a small, hinged leather box), I’ll be using it to transport the camera, and hoping to avoid this potential problem in the future.

There’s a viewfinder on the top next to the handle, and another on the side, meaning that, in theory, you can view your picture in both landscape and portrait formats. However, as these are for working at waist level, it’s virtually impossible to frame a shot accurately when the camera is on a raised tripod. (That is of course, unless you take step ladders with you.) Given the relatively slow shutter speed, I’ve found a tripod pretty much essential when using this camera, and fortunately there are two mounting points.

The only difficulty here is that the position of the tripod mount for landscape format is quite close to the film advance wheel. Consequently, once you’ve taken a picture, it is easiest to remove the camera from the tripod to move the film along. The fact that the image in the viewfinder is reversed just adds to the challenge in composing a shot.

As with many box cameras the Gevabox takes 120 film (eight shots per roll, each negative 6 x 9cm) and uses a meniscus lens. This lens can be focused using a dial on the front of the camera which simply moves the lens closer to or further away from the film plane. The lens focuses between 5ft and ∞, with the field of view similar to that of a 35mm lens on a 35mm system (roughly 63˚). It’s quite difficult to gauge how to set the lens when photographing objects fairly near to the camera.  This can be seen in the image of the snowdrops below.

Despite measuring the distance from the snowdrops to the camera (exactly 5ft) and setting the lens accordingly, I still managed to get the moss on the tree far sharper than the flowers.

It’s fair to say that even with the distance correctly set, this is not the sharpest piece of optical glassware out there. That said, though it’s no piece of prime Zeiss, I don’t find it to be as poor as suggested by one or two other photographers. Maybe it’s just that my standards are lower, for it captures enough detail to keep me happy, whilst at the same time producing a very pleasing almost old postcard type effect.

It also functions best when conditions are bright and f16 can be used. Thus far I’ve only used 400 ISO Ilford HP5+ and this seems sensitive enough to produce, to me, quite acceptable results, even in quite dull light.

So, would I recommend one? Without hesitation, the answer is yes. The Gevabox has a bit more flexibility than most standard box cameras and can be used to produce images of quite a reasonable quality. Using it inevitably slows down the picture taking process, as of course you set up the camera, take a light reading, set the controls, and compose your image. And that’s all before people come up to you and start asking about the camera you’re using, and why you’re not using a digital device.

This is not the camera for action, wildlife, close up, sports, or most street photography, but for architecture and landscapes, by slowing you down, it really makes you look at the scene in front of you and think about what you’re taking a picture of.

With no batteries and no electronics of any kind, there’s very little that can go wrong mechanically. Obviously check that the shutter functions before buying one and be aware that different owners report this can operate at anything between 1/30th and 1/100th of a second. In addition, the original manual can be found online, there’s a couple of useful Youtube videos and, oh yes, they shouldn’t cost you a king’s ransom.

Just £25 to £30 should be able to acquire a decent working one, free from corrosion and shiny. By no means a rare camera, you’ll frequently see them in camera shops and at fairs. So, if you fancy a shot of owning and using a box camera, a Gevabox might prove to be a nice entry point. Perhaps there are not many pixels, but it’s certainly photography with soul!

Very nice read! I’m somewhat fascinated with box cameras and cameras with less and less controls, I’ll keep my eyes peeled for one of these beauties! Thank you for a cool write up mate 🙂

Thanks for that Jay.

The first time I used this camera, I didn’t think I was actually doing anything. Turning the film winder whilst peering into the wee red window at the rear was an equally strange experience.
When the first negatives appeared out of the developing tank, it was a mixture of absolute amazement that this box had recorded anything tinged with relief that I’d wasted neither time nor money!!

I’m going to buy a “mark III” later on this year and will write a wee review once it’s had a few rolls through it.