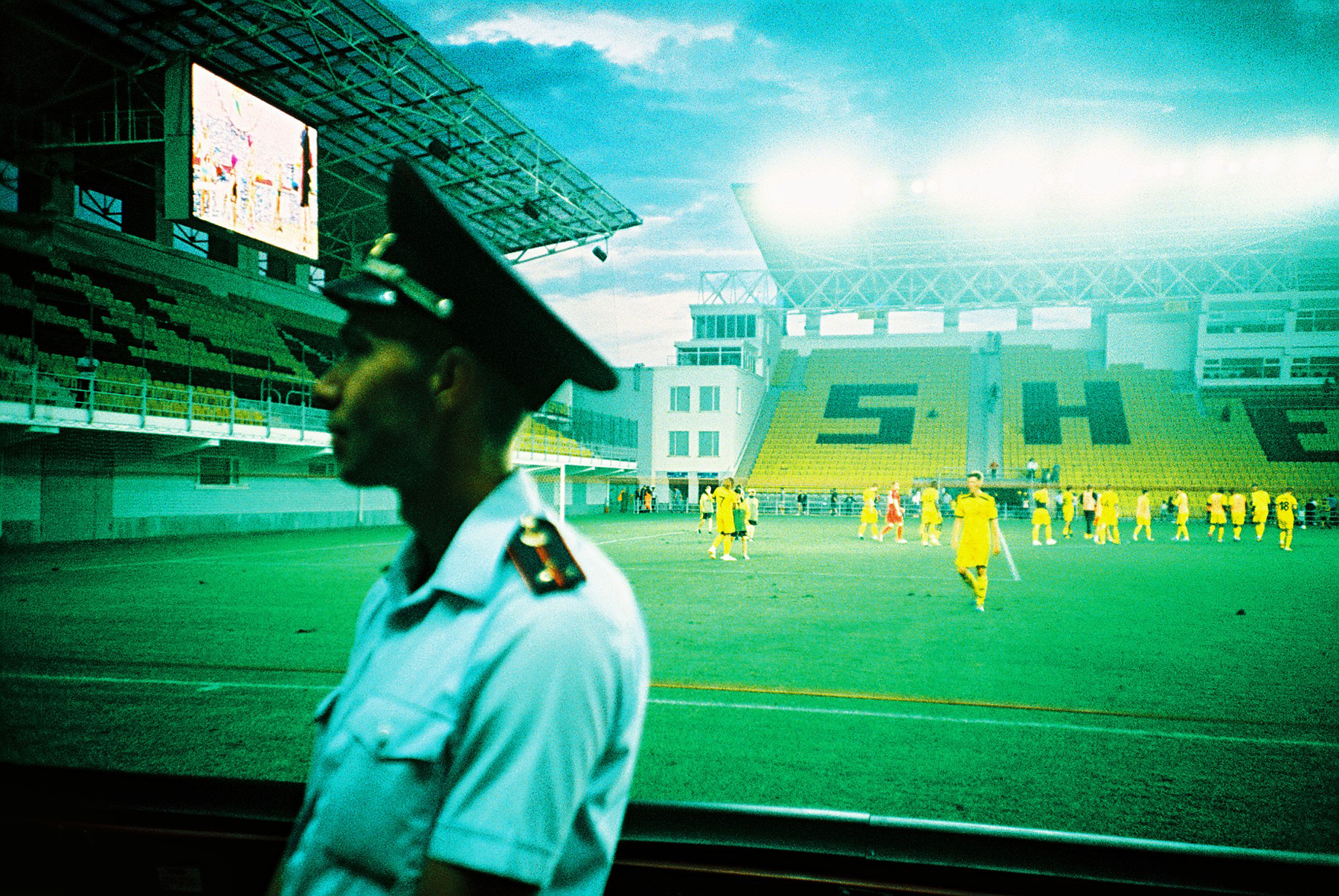 Officially, Europe has 50 sovereign states. Some of them – Portugal, Monaco, Switzerland –have been countries for centuries. The youngest, Kosovo, is only partially recognised, and has been independent for little more than a decade.

But Europe has on its fringes, a handful of unrecognised state too. All but one of them (Northern Cyprus) have come from the break-up of the Soviet Union in the early 1990s. Two of them – Abkhazia and South Ossetia – were created out of Georgia’s breakaway from the Soviet Union. Another relatively unknown sliver, Artsakh, is an Armenian-majority territory widely recognised to be part of Azerbaijan (it’s also known as Nagorno-Karabakh).

The fifth is a breakaway state within a breakaway state, in a part of the world where changing borders are a way of life. Moldova is a former Soviet state that was, until Russian troops marched in in 1940, part of Romania. Within Moldova itself – a country some Romanians consider should be part of Romania to this day – is an unrecognised state which itself is trying to win independence from Moldova.

In Russian it is known as Pridnestrovie. In Romania, and the West, it is called Transnistria.

Transnistria has no international recognition. It is described as a Russian enclave, though only around a third of its population are considered Russian. Its quest for independence came from the emergence of nationalist movements in the last days of the USSR; Moldovan’s independence movement included elements who wanted a complete de-Slavification of an independent Moldova – from getting rid of its Cyrillic alphabet to expelling its ethic Russian population.

In August 1989, Moldovan (a form of Romanian) was made the only official language, the Latin alphabet was returned, and ethnic minorities within Moldova started protesting at what they saw as watering down of their rights. Militias were formed, tensions escalated, and in March 1992 it spilled into armed clashes, clashes which eventually drew in Russian troops.

The fighting lasted just over four months, by which time some 700 people from both sides had been killed. The ceasefire installed in 1992 has remained to this day, but Transnistria’s identity remains in limbo. Despite the fact no-one recognises it (not even big brother Russia), it has its own government, parliament, military, police force, customs, postal system, and currency. And flag – the last one in the world which still features a hammer and sickle, in fact. 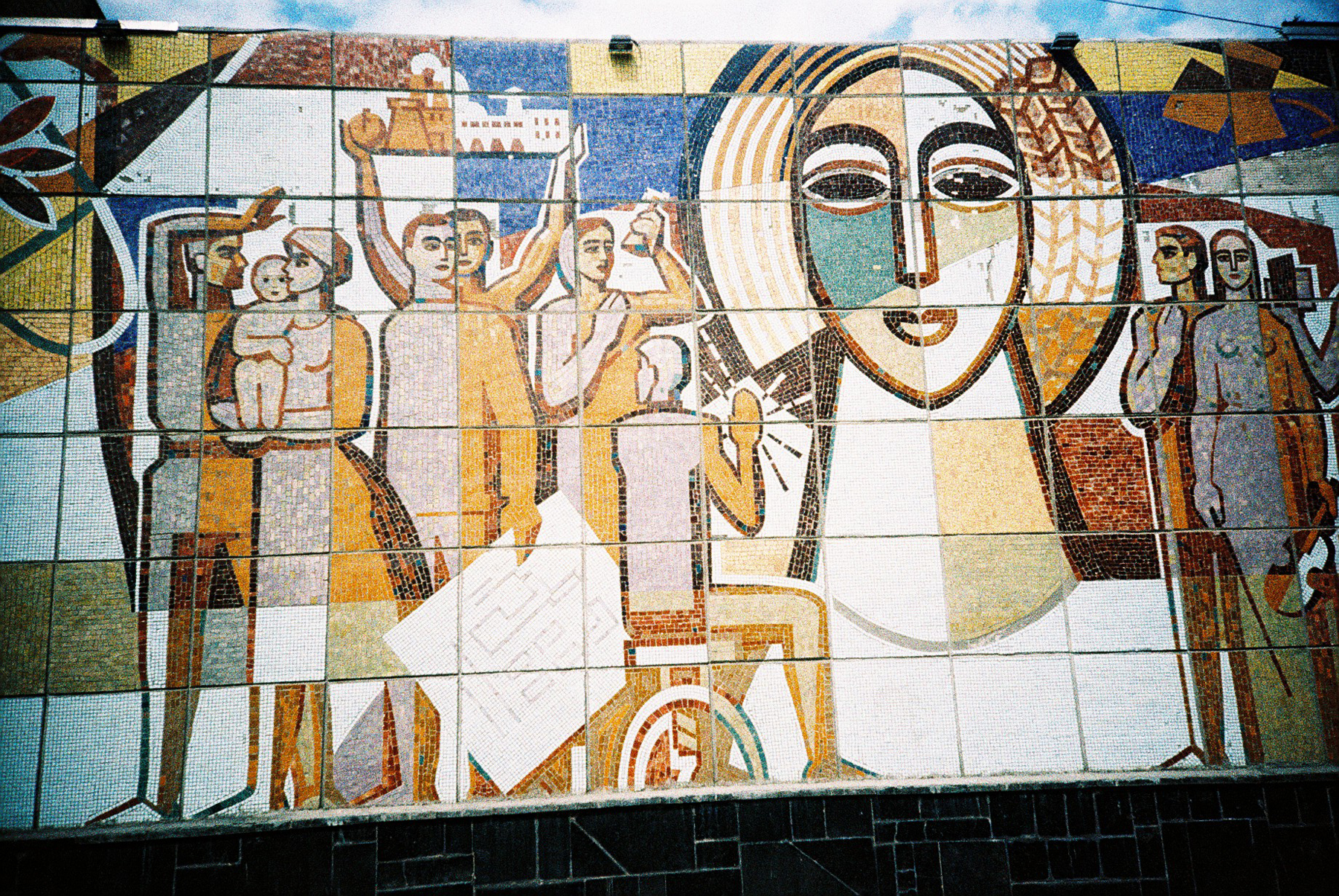 Transnistria sits on the east bank of the Dniester River, which provides a Western border against Moldova proper. On its eastern border is Ukraine. It stretches some 230km from the village of Frunzauca in the north to the town of Krasnoye in the south. It is rarely more than a dozen miles across.

When Transnistria is talked about – which in the Western media, is not every often – it’s described as a living, breathing Soviet time warp. Certainly, if you’re a fan of Soviet-style public architecture and town planning – long, wide avenues, tanks on plinths and red stars emblazoned on any flat surface – Transnistria seems like it should be near the top of your travel bucket list. 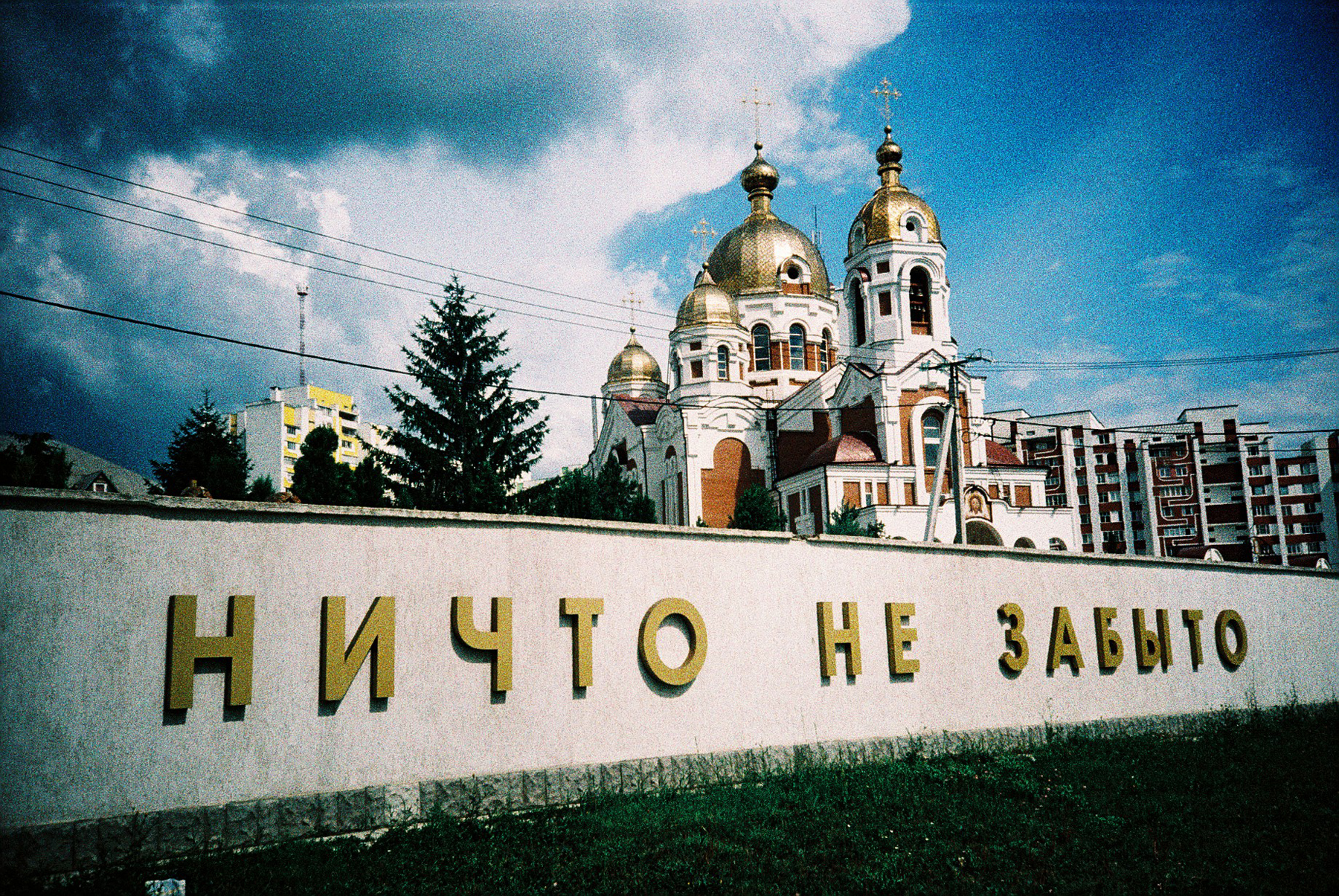 It has a reputation, at least in some quarters, of being unsafe, a haven for smugglers and organised crime. In 2002, the European parliament declared Transnistria “a black hole in which illegal trade in arms, the trafficking in human beings and the laundering of criminal finance was carried on”. While more recent study seems to suggest that smuggler’s paradise reputation may be slightly overplayed, Transnistria still cameras a Wild West reputation. There’s no consular assistance here, and many countries advise their citizens to steer clear. Tourists are still novel.

I visited Transnistria back in the summer of 2018 with my friend Brendan; we’re both fascinated in this part of the world, and have travelled around Ukraine and Belarus together, and once spent five weeks on an epic journey from Moscow to Vladivostok. He had already spent a weekend in Transnistria’s quiet capital, Tiraspol, but that was in winter. He wanted to see it in that sleepy heat of an East European summer.

A confession: most everywhere I go, I usually take a LOMO compact with me – either the LC-A, the upgraded LC-A+ or the wide-angle LC-Wide. LOMO cameras are the perfect travelling cameras, especially in summer and especially with slide film inside. Cross-processing slide film brings super saturation, atmospheric grain and eye-popping contrast. It’s very much a filter I like seeing the world through.

That year, I had fished my original Soviet-era LC-A out of the cabinet and decided to take it everywhere with me; trips to work, trips abroad, weddings, concerts. This is the camera that started my love affair with film photography back in the year 2000, a solid brick of utilitarian Soviet “charm”. My LC-A was made in 1986, when the city it was produced in was still called Leningrad. The film counter has long since fallen asleep and the body has picked up myriad scuffs and scratches from its journeys around the world. But it works perfectly. Taking this iconic Soviet camera to a Soviet “time capsule” seemed like a no-brainer.

Tiraspol, Transnistria’s de facto capital, has no international airport. You have to fly to Moldova’s capital Chisinau and drive the half-hour to the Transnistria border. You get that bona fide Soviet experience, sitting in a queue of traffic under the watchful eye of Soviet-era armoured personnel carriers and glowering customs officials, though the actual experience of getting your passport stamped and waved through is nothing to bring on a case of the Cold War spy sweats.

We spent the best part of three days in Tiraspol and its surrounds, a capital of some 160,000 people, its grand avenues and imposing stone buildings hinting that it was once part of something bigger. You can see why Transnistria gets called a “Soviet timewarp”; capitalism and advertising has obviously sprung up to replace the Soviet system, but its symbols still reside. That staple of Soviet remembrance, a T-34 tank on a plinth, can be found on the city’s main drag, 25th October St.

Ex-Soviet cities are often an intriguing mix of this kind of monumental construction and something much more homely. Tiraspol was no different. Lorries from the vast factories of GAZ and ZIL rumbled past babushkas selling freshly picked berries and orchard fruit, and peoples front gardens resembled country dachas. I don’t mind that these places are short on world class sights and Michelin-starred restaurants. These are places to wander with a camera and enjoy the quiet and calm and dislocation from the 21st Century (though you can, of course, get wi-fi in the bars and restaurants. 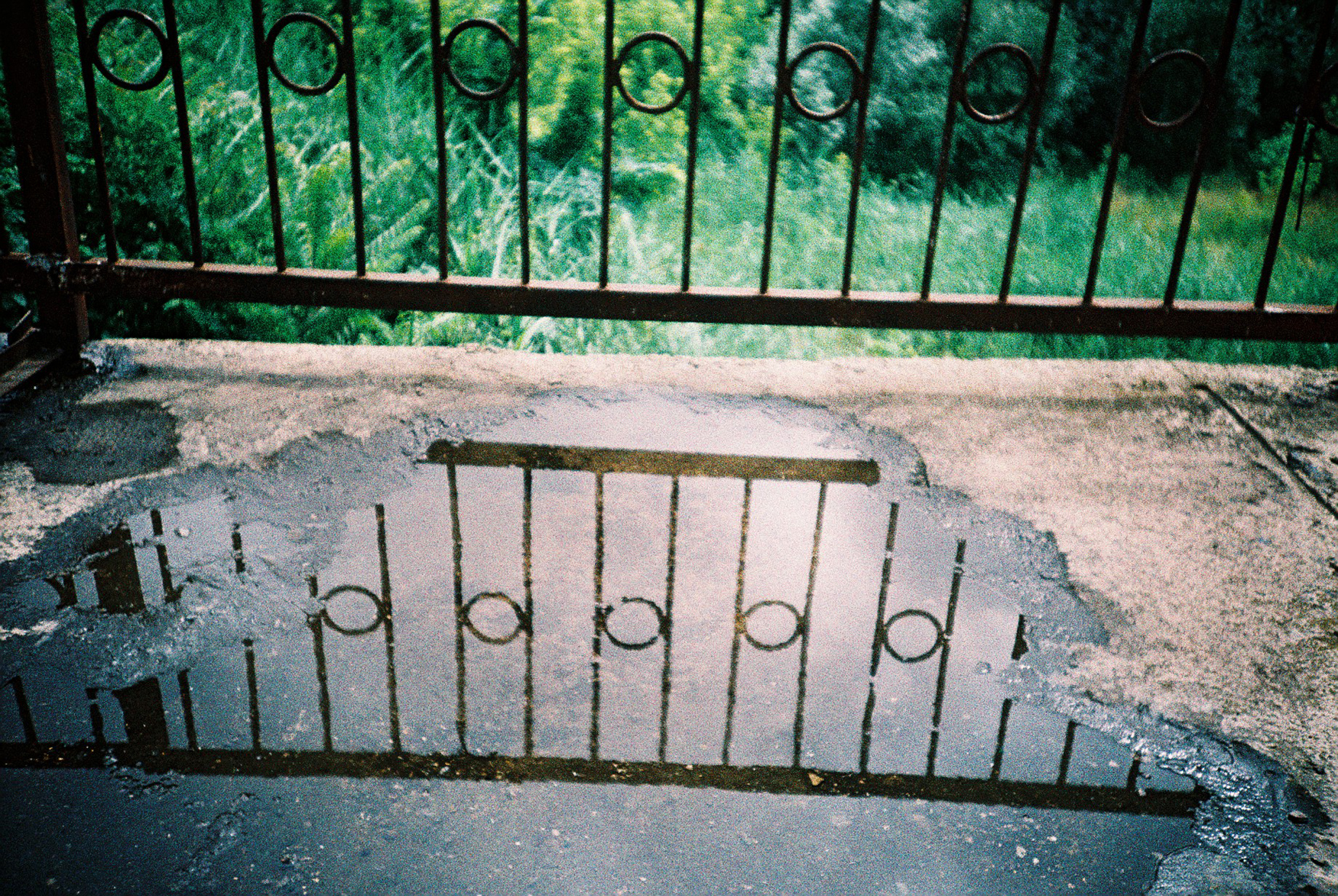 I like the LOMO LC-A for street photography because it’s quiet – rangefinder quiet. One of the tenets of the LOMOgraphy movement calls for cameras to be used without fussiness – don’t think, just shoot – and the camera rewards off-the-cuff shooting.

The zone focusing may seem a little unrefined for street photography, but in bright light the camera will be choosing a narrow aperture anyway, so that zone of focus will be deep enough to keep most things in focus.  And anyway, serious street shooters often adopt hyperfocal distance shooting, setting a distance and an aperture and shooting from the hip.

We watched World Cup games inside Intourist-era hotels with all the atmosphere of a John Le Carre novel. We sat sipping beer in outside cafes on the banks of the lazy Dniester.

On one day, we took a full day tour run by Transnistria Tours, a travel agency run by Andrei and his brother Anton. Both speak fantastic English and the full day tours takes you far from Tiraspol to tiny villages nestled along the banks of the Dniester, past ruined monasteries and quiet towns with statues of Lenin surveying the sun-dappled shade. The countryside is beautiful and devoid of litter.

I packed a few different films to cross process; Agfa Precisa CT100, Kodak Elite Chrome and Kodak Elite Chrome Extra Colour 100. The latter in particular looks fantastic in good light, with its saturated colour palette. You can see it especially in these pictures taken on a cloudless day in Tiraspol. 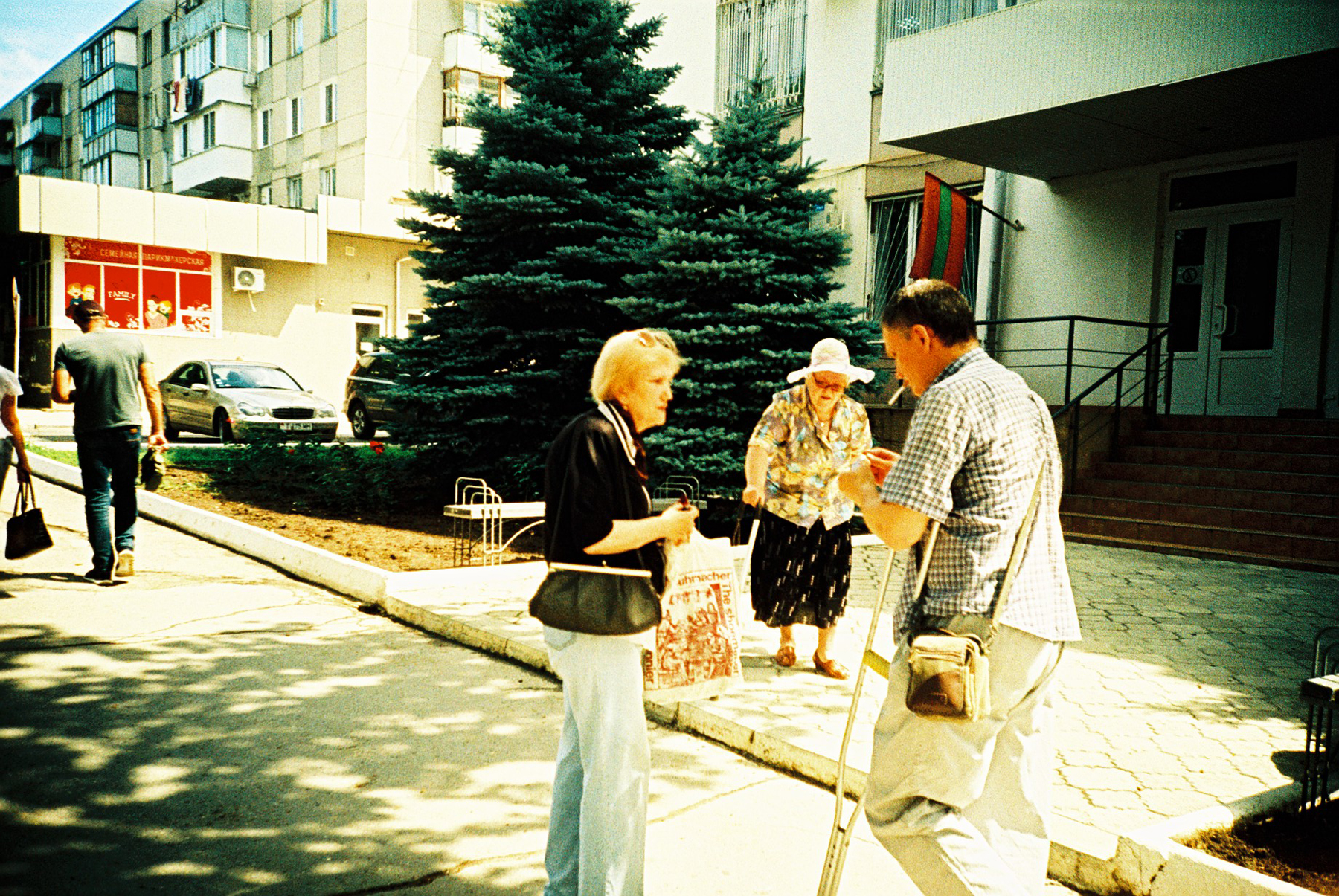 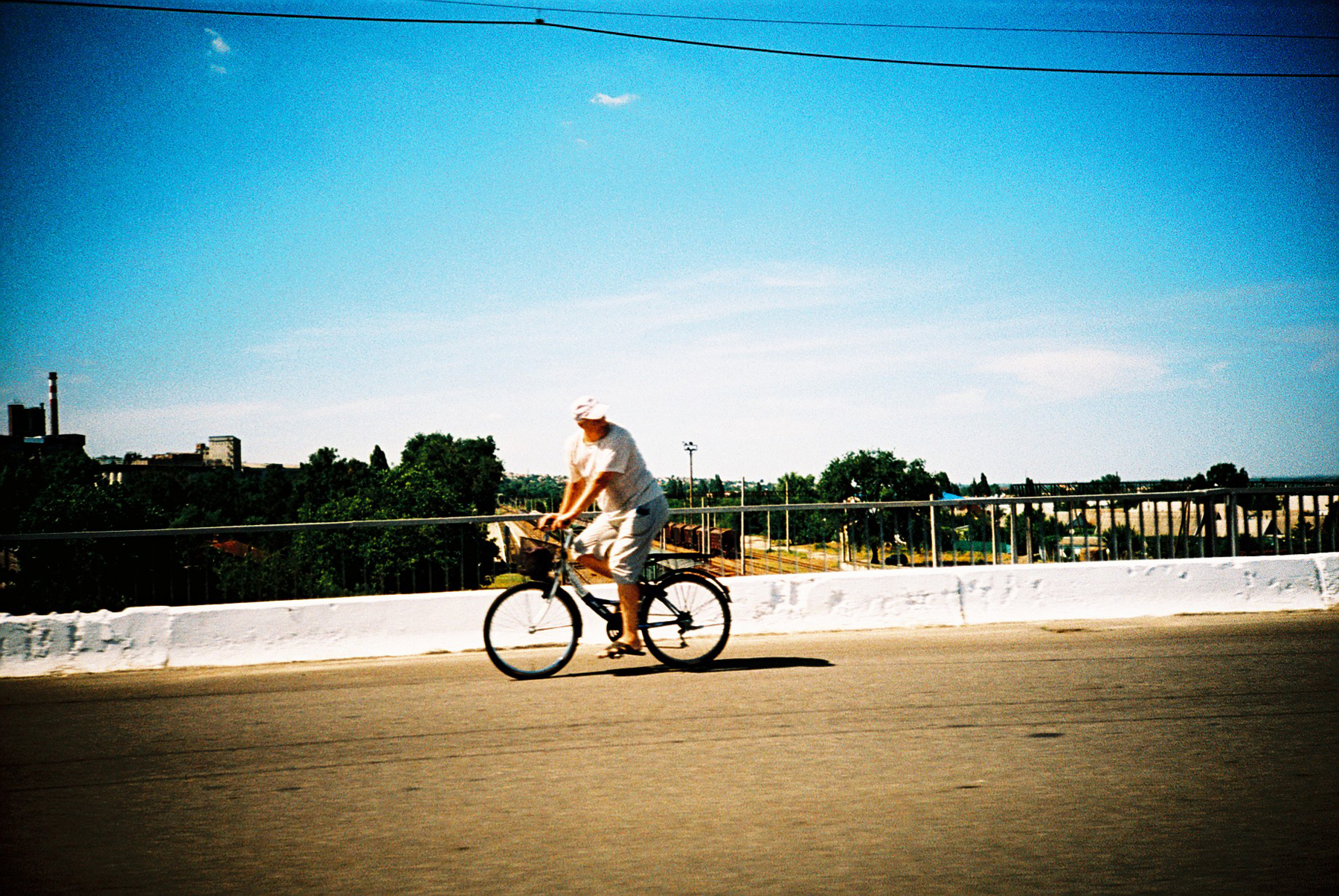 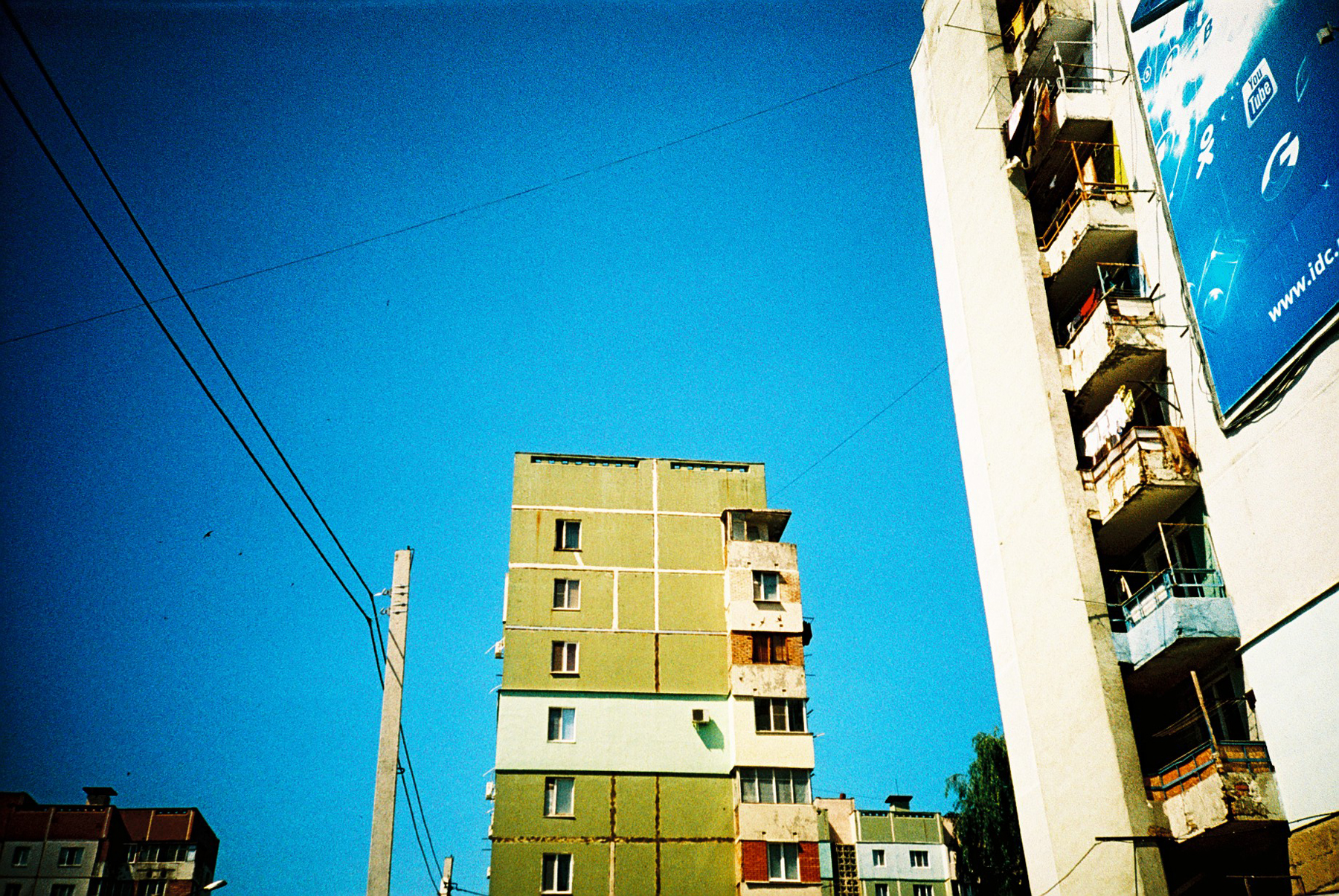 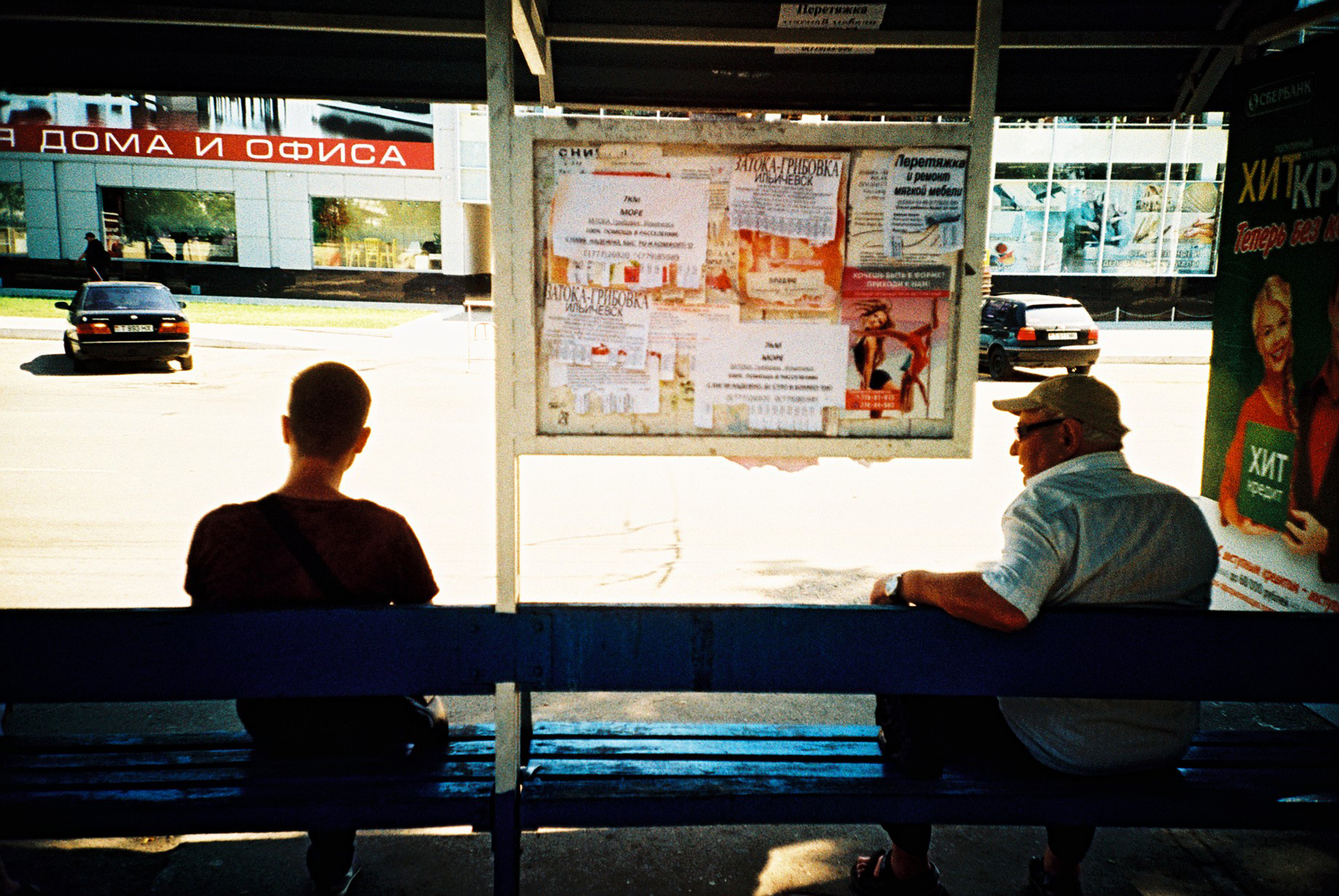 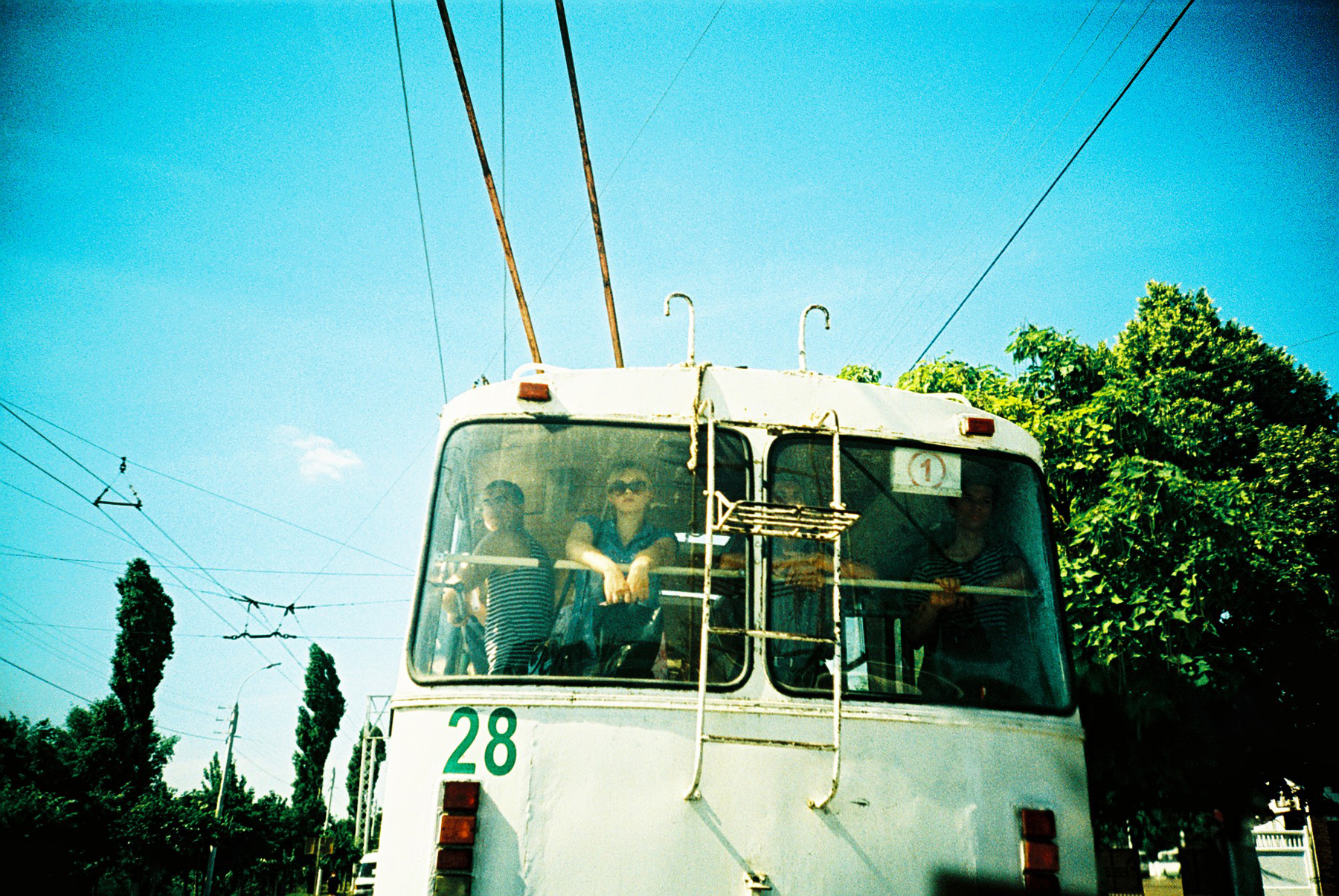 One of the highlights, both for photographs and bragging rights, was a trip to see the local football team play. Sheriff Tiraspol is the only reason most people have heard of Tiraspol – it’s the vanity team of Transnistrian business conglomerate Sheriff, which owns everything from a supermarket chain to petrol stations to a TV channel and a Mercedes-Benz dealership. It plays in a brand spanking new stadium on the edge of Tiraspol which cost $200m and wouldn’t look out of place in the English Premier League.

Sheriff Tiraspol, bankrolled by deep oligarch pockets, is allowed to play in the Moldovan league and is streets ahead of its rivals; the game we saw was a proper, old school drubbing, the Sheriff ultras celebrating each goal with chants and thumping drums. I took the picture at the top of the post at the end of the action, the security guard dressed in that Soviet-style peaked cap like a figure from a generation ago. 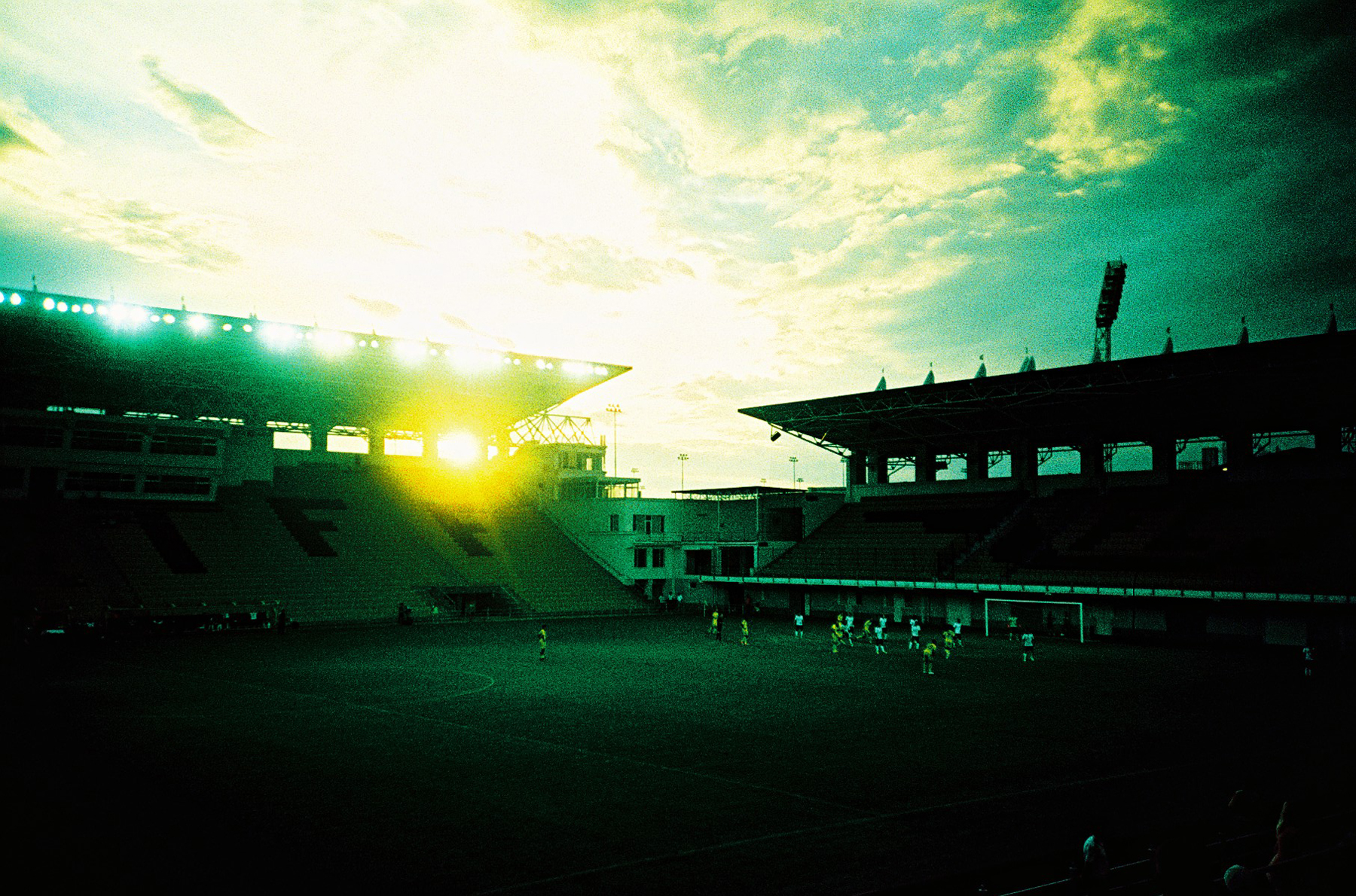 Loved everything about this! Loved thT you went, that you shot it all with the original Russian LCA, the films you chose, and that shot of the upholsterer’s street ad! Fabulous job, Stephen