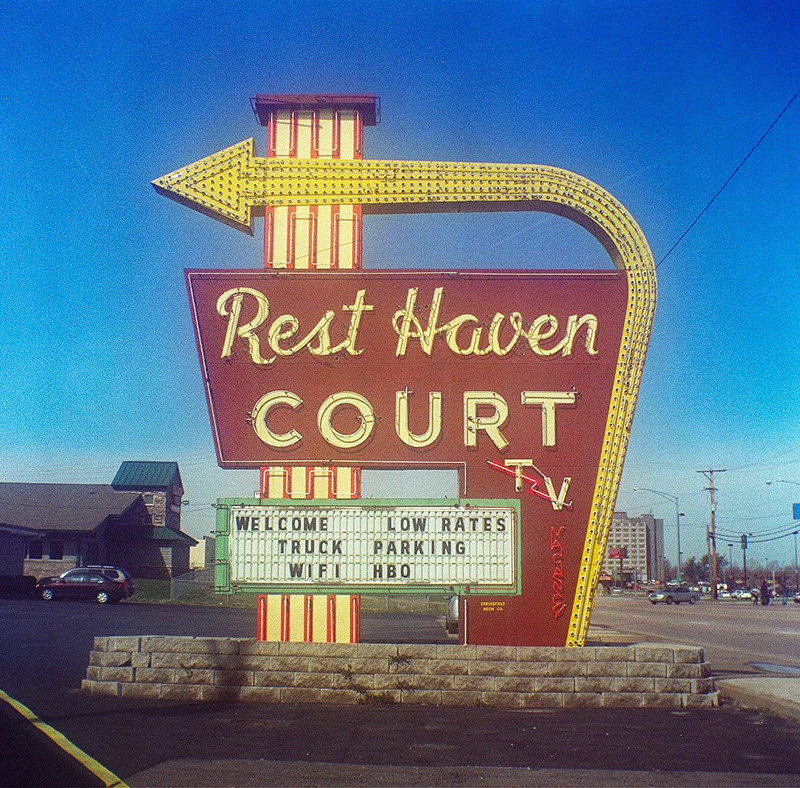 Route 66 wound, as the old song goes, from Chicago to LA. But by 1985, speedy Interstate highways had supplanted it along its entire corridor. It spelled Route 66’s end as an official US highway. That year, the last of the US 66 shields came down.

I was a teen then and remember reading about it. Photos of the old road, dead-ended and abandoned in places thanks to the Interstate bisecting it, hooked me hard. Nobody had heard of a “bucket list” yet, but Route 66 immediately went on mine.

And then it took me almost 30 years to finally make the trip. By then I had teenage sons of my own. I brought them along.

You’d better believe I took one of my old cameras along. I’ve collected them since I was a small boy and have always loved shooting them. Kodak’s 1950s Brownie Hawkeye undoubtedly captured millions of vacations in the middle of the last century, probably including countless Route 66 road trips. It’s relatively compact and dead simple to use.

We’d been in the car an hour or so when we reached tiny Odell, Illinois, and its restored Standard service station. The excitement was still fresh, our eyes were wide open, and we wanted to stop and look at everything. At the other end of our trip, days later on Oklahoma’s vast plain, trip fatigue was closing our eyes. “Look, boys, another old gas station,” I’d say, and keep driving. I’d hear a grunt of acknowledgement from the back seat.

The building was erected in two parts: the main gas station in 1932, and the service bays in about 1940. Just after the war, Route 66 was rerouted to bypass Odell. Traffic dried up and business dropped off. It stopped selling gasoline in the late 1960s and closed for good in the mid 1970s. It decayed for years until preservationists intervened to save and restore it.

A pleasure of driving Route 66 is staying in the vintage independent motels along the way. It’s usually a pleasure, anyway, as some of them have become dirty and shabby. But many others have been lovingly maintained; several others have been renovated and restored. The gorgeous Wagon Wheel Motel in Cuba, Missouri, is one of the latter. It received a careful restoration in about 2010. 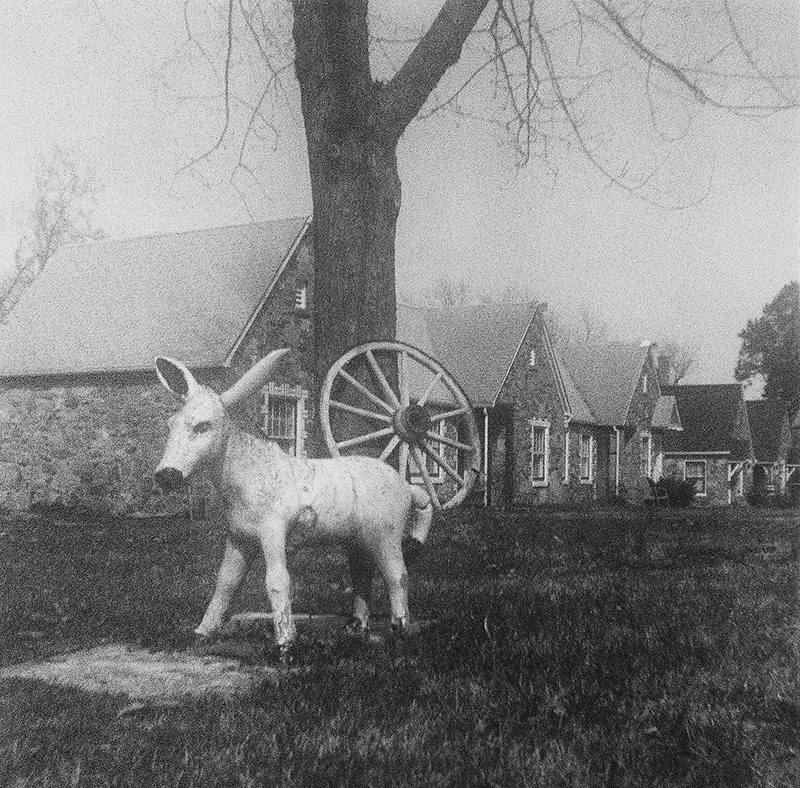 We wouldn’t stay at the Wagon Wheel this night, as we reached it in the middle of the day and had miles left to cover. But we stopped long enough to take lots of photos. It is a set of charming stone cabins, the first of which were built in 1938.

Model-T-era travellers found no roadside motels, however. They brought camping gear and slept in farm fields and in the woods. Soon highway entrepreneurs cleared a little land and made “auto camps” where, for a fee, travellers could pitch tent. And then some of the camp operators built little primitive cabins. Travellers liked them and wanted more. Long story short, this is how the roadside motel came to be. 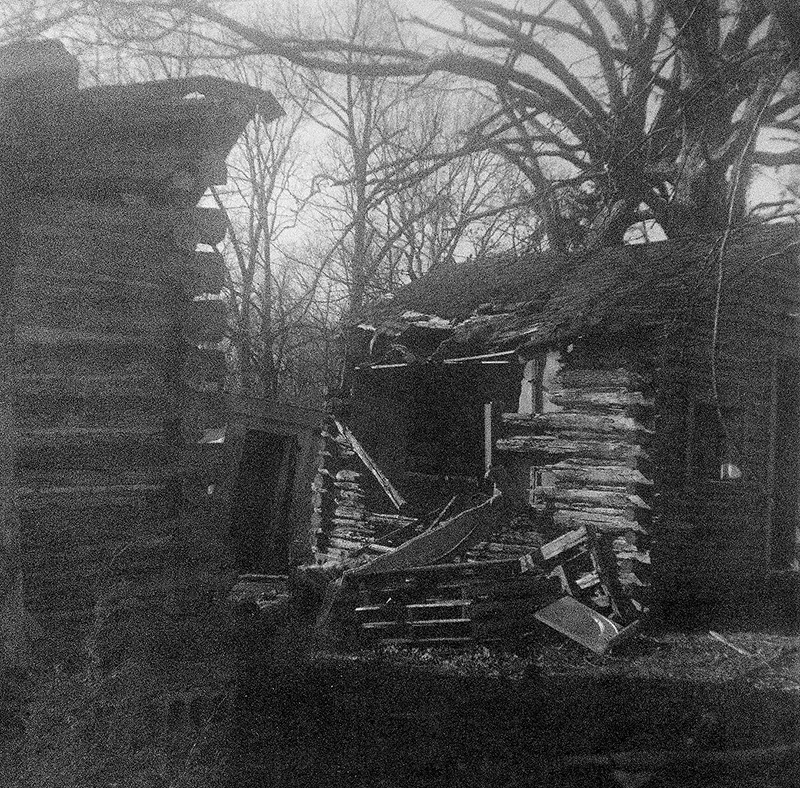 John’s Modern Cabins, near Doolittle, Missouri, is from the cabin era. Abandoned since the 1970s, they’re slowly decaying back into the earth. The cabins are hard to reach on a cut-off section of Route 66. This section used to serve as a frontage road for Interstate 44, but some years ago the Interstate was moved to a new location, abandoning and isolating both this section of 66 and John’s Modern Cabins.

You pass a lot of old motels on Route 66. Their signs, many of them from the neon era, are part of the Mother Road’s charm. The Sunset Motel is in Villa Ridge, Missouri and while the motel looked to be closed, its neon signs were in pretty good condition.

But it’s hard to tell that from the photo. Verichrome Pan is said to be a very resilient film, returning good images even after decades of hard storage. This roll must have been thoroughly abused to return such grainy, washed-out images. I had to do considerable work in Photoshop to coax this much information out of the negatives.

I had better luck with the Kodak Gold 200. It had always been stored cold and so performed reasonably well. The Rest Haven Court is in Springfield, Missouri, and its’ neon still lights up beautifully every night. (See the pic at the top of the article)

Route 66 was improved many times during its prime years, meaning that in some locations you’ll find two or three roads that were all Route 66 at some time. In southwest Missouri a short segment of concrete road paved in the 1920s lies close to a later routing of the road that still serves as a state route. Along this concrete road is Spencer, an unincorporated town.

It’s a stretch, actually, to call it a town as nobody has lived there in decades. Only a short row of buildings remain. But one of the charms of driving Route 66 is its quirks, of which Spencer is one: little by little, it is being restored. There’s no discernible purpose for the restoration, and not a soul was present to greet us or to try to sell us Route 66 trinkets. It was just there, a place to enjoy and explore. That made Spencer all the more memorable and fun for us.

We had great weather luck on the trip except for a short bit of rain in Carthage, Missouri. Under threatening clouds I stopped to photograph the back of this drive-in’s screen. Thanks to the strength of the subject, the dusky colours, and even that tiny light leak in the corner, it became my favourite trip photograph from my Brownie Hawkeye.

That most of my photos are from Missouri is a testament to how much there was to see there. But nothing in Missouri was as audacious as the Blue Whale on a pond just west of Catoosa, Oklahoma. For years this was a popular local swimming hole. You could walk through the whale’s mouth out to its tail and jump in the pond for a swim. Today it’s primarily a tourist attraction and rest stop with picnic tables and a restroom. 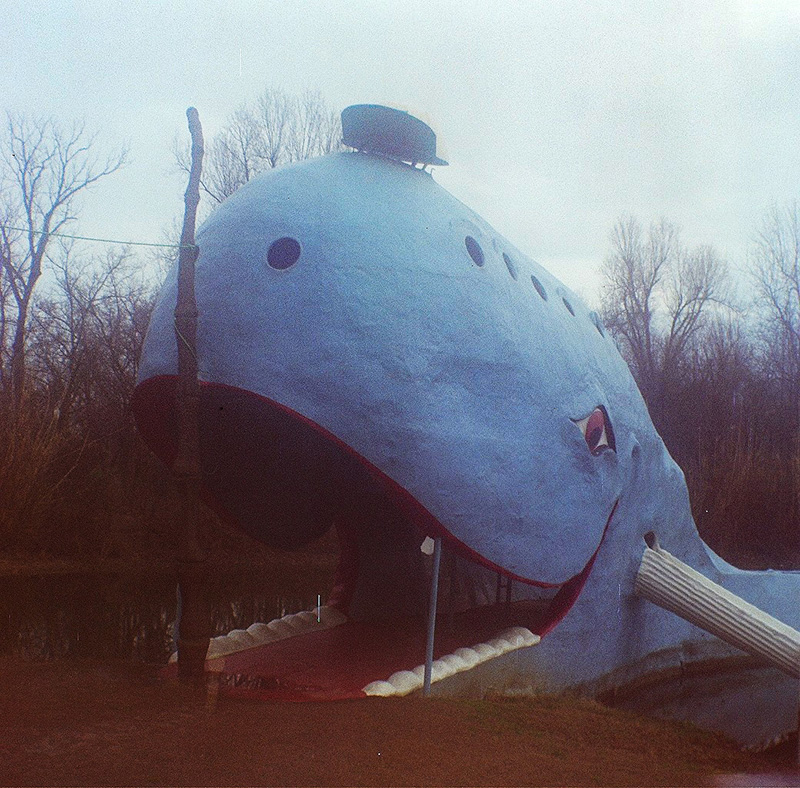 When we bedded down for the night in Tulsa, my youngest son announced that he wouldn’t mind if we turned around for home in the morning. Trip fatigue had set in for him. I wasn’t quite there yet so we pressed on in the morning. But when it felt like we were never going to reach Oklahoma City just a hundred miles away, I realised that perhaps I’d had my fill, too. But then, as we rounded a curve, it swung into view: a 66-foot-tall soda-bottle sculpture. It was as welcome as an oasis in the desert, and we stopped. Pops is a gas station, convenience store, and diner that offers over 600 kinds of bottled sodas. Under the cantilevered canopy, the front windows are lined with pop bottles filled with every colour of the rainbow. We paused for lunch, and my youngest boy excitedly assembled a custom six-pack of colourful sodas. I think he was glad we kept going one more day. I know I was.

We ran out of time just before we reached the Texas border. Turning back toward home we followed the Interstate for the higher speeds it allowed. We watched segments of old 66 parallel the highway, segments we’d driven in the days before. But Interstate speeds allowed us to reach Cuba, Missouri in one day so we could stay at the Wagon Wheel Motel, which was as delightful inside as it was outside. It was a fitting last stop on our trip; the next night, we’d return to sleeping in our own beds.

Jim Grey has collected cameras for more than 40 years. He writes a popular film-photography blog, Down the Road. 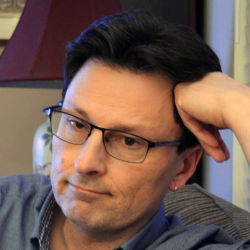 Follow me
Jim Grey
Jim Grey is a blogger and film photographer in Indiana, USA. He likes to try old cameras and photograph old things: buildings, roads, cars. He writes about it all on his site at blog.jimgrey.net.

Too bad about the Verichrome Pan. Next time you use the Brownie I would suggest modifying 120 film to fit into your 620 camera. https://thedarkroom.com/resurrect-old-620-film-cameras-with-120-film/

About ten years ago, on a Spring Training “Cactus League” vacation via Vegas, my son and I took a detour from I-40 to the “old Route 66”, starting at Kingman heading east, hang a left, take the 90-mile “horseshoe” and return to I-40 at Seligman. The highway was essentially deserted with perfect pavement. Along the way I saw something I hadn’t seen since 1973-74 in the Midwest – Burma Shave signs! At least two sets of rhyming “doggerel” and, of course, “Burma Shave”. These were not like the shabby, ill-maintained Midwest signs back in the seventies – they had new… Read more »