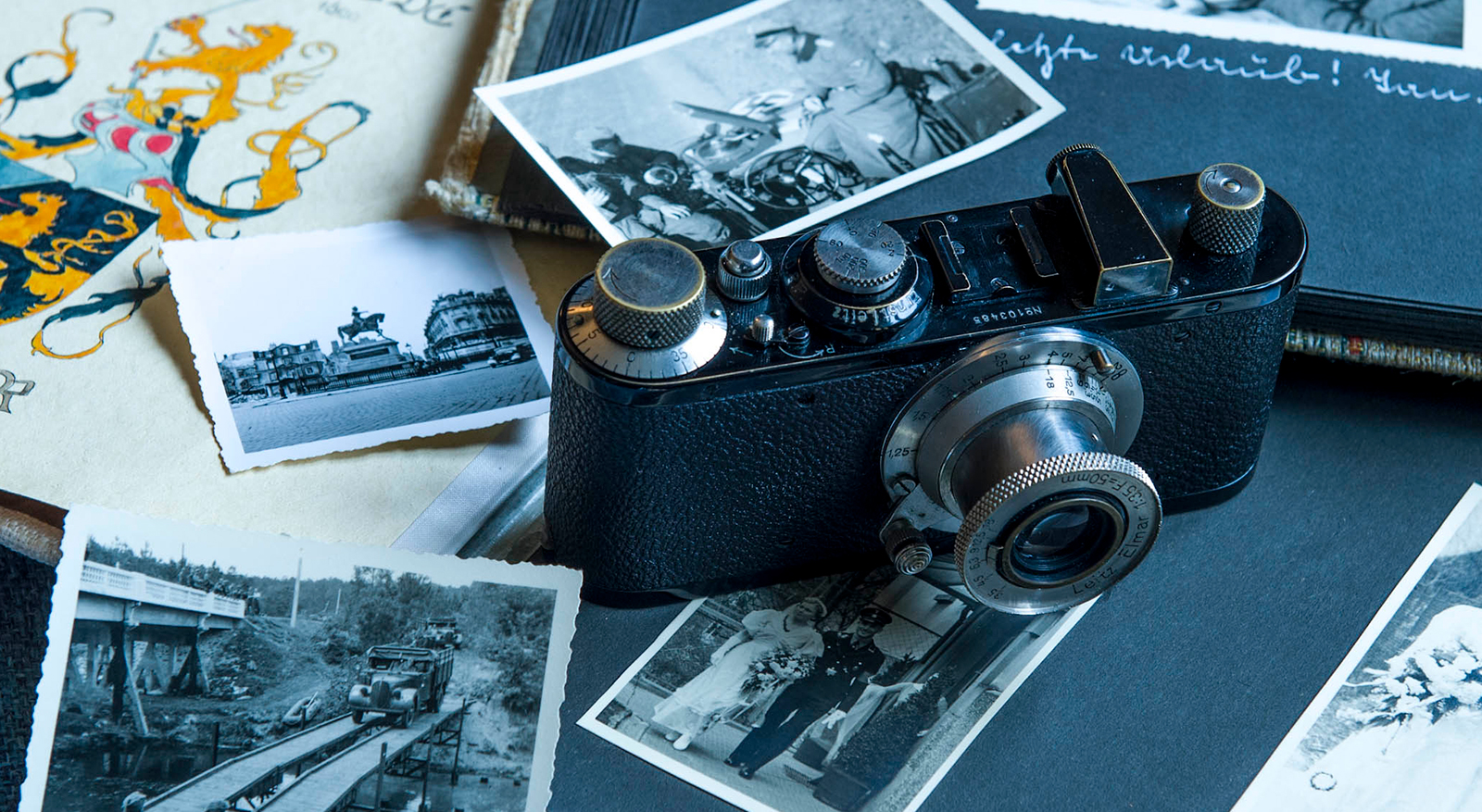 A few months ago, my friend Darren suggested we meet up for a beer. He had a camera he wanted me to take a look at.

Darren and I met nearly 20 years ago, when we were both covering the Manic Street Preachers’ gig in Cuba; Darren was taking pictures for The Guardian, and I was covering it for The Independent. A few years ago we tried to kickstart a book about London’s famed 100 Club music venue – Darren has been taking pictures there since the 1980s.

The camera Darren wanted me to look at was a Leica. He’s an enthusiastic film shooter to this day, but not a Leica collector. This camera had a bit of history, he told me, but he would tell me more when we meet.

A little while later we met up in Brighton, where I was shooting with my friend Anil Mistry, a fellow filmophile who runs photo walks along the south coast. Darren pulled out the Leica at the train station. It was small, black, brassed around the edges, and a lot older than I expected. Over the course of our photowalk around Brighton and a few pints, I heard the story.

The Leica belongs to Darren’s friend Gunther. It’s a Leica Standard, a simplified version of the Leica I built by Leitz of Germany between 1932 and 1949. It’s basically a budget version of the original production Leica, which had been gradually improved since production started in 1925.

The Standard had no rangefinder, its viewfinder sits on top of the body , and it doesn’t have any any slow shutter speeds. Aside from that, it was almost identical to the pricier Leica I. While this was seen as a budget version of Leitz’s revolutionary camera, it was still something of a status symbol. According to the camera’s serial number, this is one of the first batch of 5,000 Leica Standards which were produced from 1932.

Gunther’s camera came with a host of accessories, including a leather case and the periscope-like external rangefinder, which is mounted on the flash cold shoe. It’s a time capsule of 1930s photographica, owned by the grandfather he never met.

Gunther is half British and half German. His mother’s father was Alfred Bohler, a German SS soldier who did not survive the war. It was one of his widow’s only links to her dead husband. As the war entered its final days, worried that an Allied soldier might take it as war booty, she buried it in a farmyard field.

“My grandparents were from the town of Ludwigsburg in southwest Germany. They met on a skiing trip in 1929. My grandmother Elfriede Frizlen was 17 and my grandfather Alfred Bosler was 20 years old.  My grandmother’s father was a successful engineer which brought her great privilege. For example, she took her first flight in a WWI fighter recommissioned for domestic use in 1929.

“My grandfather’s family were also middle class and he grew up in a house attached to the cemetery in Ludwigsburg, which his father was in charge of. He studied mathematics and received a duelling scar when part of a student fraternity in 1929. It was a fashionable ‘badge of honour’ in the 1920s amongst university students and was seen as showing honour and class, which was later banned under the Third Reich.

“I think my grandfather bought his camera in 1932 after he’d finished his studies and became a school teacher. Family history and the photographic documentation of such was an important part of my grandparents’ lives, which the many photo albums they left are testament to.

“They seem to have taken the camera on a number of skiing trips (both grandparents were avid, successful skiers) in Germany and Austria to which we still have a diary as well as many pictures. They also took it to Norway on a cruise of the Fjords in 1935. A diary with pictures also exists of this adventurous trip. They married in 1936 and took the camera on their honeymoon to Monaco. There are also many photos of the Nazi era in the family photo albums.

“As a reservist, my grandfather volunteered on the 1st September 1939, the day Germany invaded Poland. He was initially a driver of an Opel ‘Blitz’ truck. He then took part in the invasion of France where his division was under the command of Field Marshal Erwin Rommel. After the fall of France, the division and my grandfather were part of the occupational force and stationed near Bordeaux.

“My mother was born in August 1940 whilst my grandfather was stationed in France. He was able to return on leave shortly afterwards and also spent Christmas 1940 at home in Kirchberg-an-der-Jagst where he had taken up a teaching position before the war. He then documented the birth with a diary of thoughts and photographs dedicated to his new daughter.

[Note: It should be pointed out for historical context that Gunther’s grandfather was a member of the SS Totenkopf (Death’s Head) division, which carried out numerous atrocities on both the Western and Eastern Fronts, including the execution of prisoners and civilians, and some of whose members were found guilty of war crimes.]

“My grandfather then moved to East Prussia in early June 1941 and took part in Operation Barbarossa, the invasion of the Soviet Union. He had been promoted whilst in France and became the company commander’s driver. This also entailed bringing supplies to the front line and transporting wounded back to field hospitals, often through occupied territory as the front was so fluid. He was never to receive further leave to return to Germany.

“After nearly a year at the Russian front he was called into the front line. He died on a mission to regain lost German positions in May 1942. Of the 32 men on that mission, only eight returned. I was lucky enough to meet two of his comrades who miraculously survived the war and who were able to tell me about him. They relayed their experiences of the Russian front and also about how and where my grandfather had died.

“The camera, meanwhile, was left with my grandmother as my grandfather didn’t take the camera to Russia. It was actually not officially permitted for troops to carry cameras, this was left to the war correspondents to document. However, many soldiers did, including the two comrades of his that I met who were able to show me many photos from the war in France and Russia with my grandfather in them. Incredible really.

“As the war progressed my grandmother started to work on a nearby farm and was paid in food so she and mother wouldn’t go hungry. She also worked in a small, local munitions factory. As the Americans advanced deeper into Germany rumours were rife they were confiscating valuable items from local communities. So, as the Americans were about to arrive in their small town in April 1945 she decided to bury the camera on the farm she was working on, along with some other valuables.

“The Americans requisitioned the flat my grandmother and mother were living in which was located within the town hall. The Americans used it as their headquarters whilst in Kirchberg. A family wardrobe still bears the mark of a rifle butt which occurred as the flat was being searched. On their arrival, local children were given chocolate by the American soldiers, all except my mother because no white flag (in the form of a bed sheet) had been hung from their window.

“My grandmother never recovered from the loss of her one true love despite marrying twice more in the years after the war.

“After the Americans left in November 1945, she unearthed it and it was subsequently used for many years as the family camera, also by my mother.

“My mother came to England in 1966 and the camera was left in Germany with lots of documents and photos belonging to my grandparents (including many letters written between them while my grandfather was on the Russian Front). My mother moved back to Germany in 1992 and I only discovered she had all this history with her about 10 years ago. 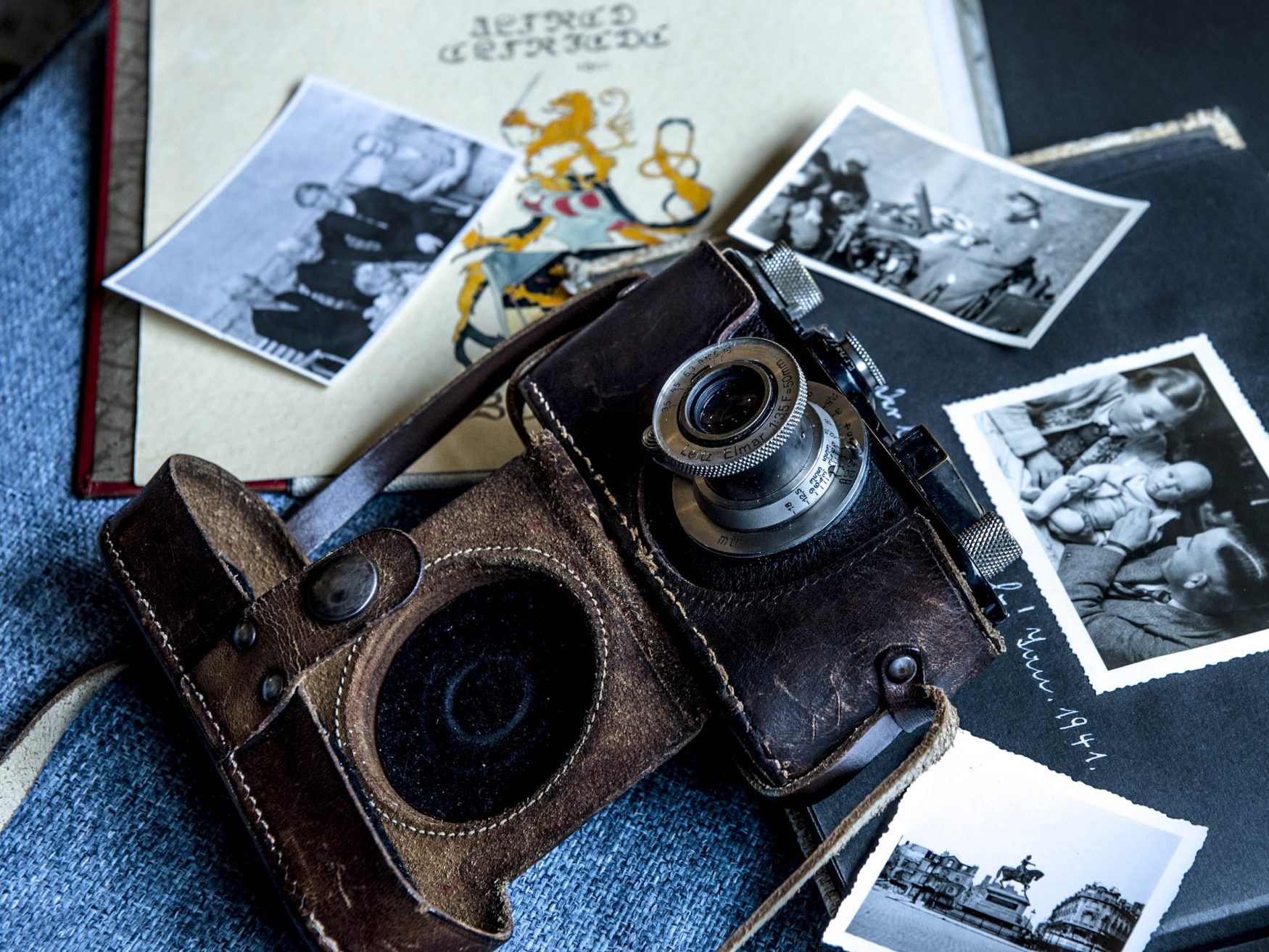 “My mother gave it to me for my 50th birthday. Hopefully I can start to use it and experience something of the past through the process.”

Gunther’s Leica is now awaiting repair – the shutter has some issues, though that is probably a result of the time it spent unused in Germany recently than any damage it received during its six months buried in a German field. Thankfully, Leica repairs aren’t yet a dying art and I’ve helped Gunther locate a repairer who should be able to bring the camera – one that comes from a dark period in 20th Century history – back to working condition.

After that, the buried Leica will be ready to take pictures again.

This is my favorite Leica model. It is a precision instrument with an excellent lens. It is also small and very portable and has no electronics to break down. The real challenge is the loading of film from the cameras bottom. You must cut the leader on the film back a few centimeters os it does not hang up on the shutter frame. If you do that and with a little practice it becomes second nature. Enjoy you have a real prize with a known history and a gift from a grandfather you never knew but is apart of you.… Read more »

What a wonderful story, thank you for that. A perfect way to while a few moments while waiting for a train

I love these stories you uncover and so fascinating to read one about the Second World War from the German perspective. Thank you for sharing.

Judging from the picture of training in France, it seems that grandfather was a member of the SS-Panzer division Totenkopf troops (skull on the right collar patch).

Thanks John… yes, I will add that info now to add historical context to the piece. Thanks for the message.

[…] This is a camera that comes with some dark history – the fact Gunther’s grandfather was a member of the SS should certainly not be ignored. The pictures taken on the camera, both before and during the war, create a particularly sobering time capsule (you can read the full article and see the pictures here). […]