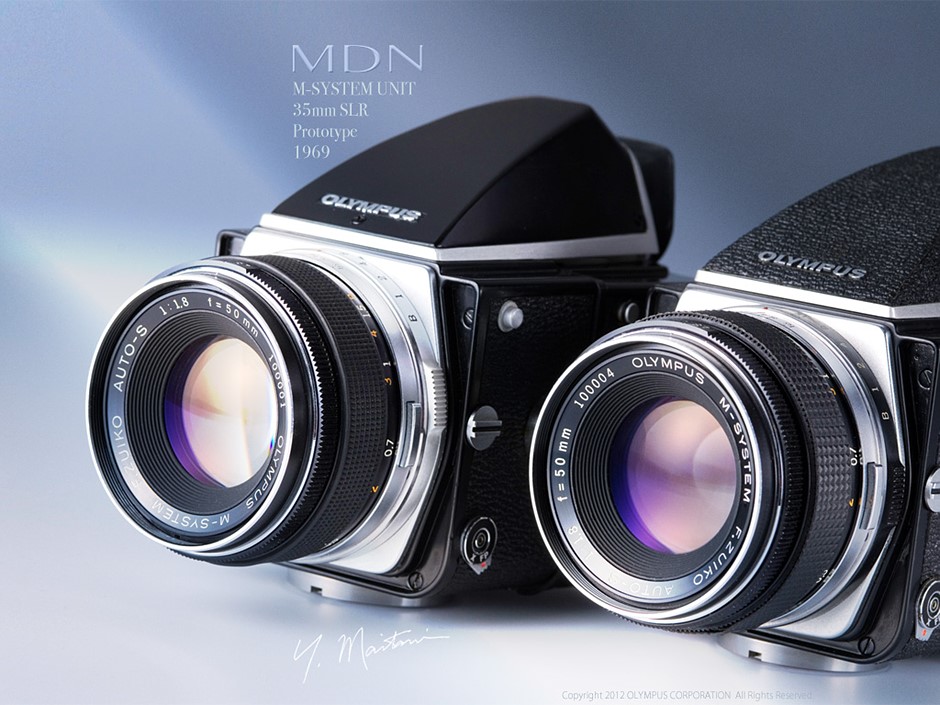 The Olympus OM-1 was a revolution in SLR design. It also came with more than its fair share of design mythology.

Lightweight, boasting a range of sharp, robust Zuiko lenses and smaller than any other SLR of the era, they redefined the SLR market. Out went clunky house bricks with a lens attached, in came a new language in camera design.

Olympus had only made one cautious step into the world of 35mm SLRs before the OM-1 appeared. Their FTL, an M42-mount SLR released in 1971, was a short-lived rival to the likes of the Pentax Spotmatic and Canon FTb. It was a conventional SLR in most respects, though at its heart was a small set of Zuiko lenses still highly regarded today.

The FTL only lasted seven months in production; however. Something more envelope-stretching. Lightweight, boasting a range of sharp, robust Zuiko lenses and smaller than any other SLR of the era, the Olympus M-1 was announced in 1972. It was far smaller and lighter than any SLR on the market, a masterpiece of miniaturisation from Olympus’s resident design genius Yoshihisa Maitani, the man who had earlier built the Pen family of half-frame camera.

The only fly in this ointment was the name – M-1. Leica, who had their own M family of rangefinder, took a dim view of this, and took Olympus to court. After some 52,000 M-1s were built, Olympus changed the name of the new camera to OM-1.

The transition form M-1 to OM-1 is one the better-known anecdotes from the earliest days of one of the most famous marques in camera design. Rather less well known is that Maitani intended the OM-1 to be rather more revolutionary.

Had his initial design made its way into production, the OM-1 would have been a modular 35mm SLR not dissimilar to the likes of the Hasselblad 500. The lens, film compartment, shutter and pentaprism would all separate modules, allowing various parts to be swapped as the user required. A prototype was even built before Maitani’s team changed tack and came up with the more conventional design which actually entered full production.

This camera would have been known as the Olympus MDN, and later dubbed the OM-X to links its development to the OM system.

Maitani died in 2009, but in 2002 he explained the history of the OM-X to Japanese photography journalist Kouichi Akagi for the magazine Asahi Camera. The interview can be found thanks to the Internet Archive Wayback Machine.

“The OMs are designed to be a system camera,” Maitani told Akagi. “OM-1, 2, 3 … are only individual units in the system. Included in my plan is an idea that I should call the ‘OM-X’ or something. This is rather the main concept of the system.

“A camera is a tool to take pictures. It needs various functions. I try to take apart the camera into units by each function. Lens, body, film back, and a focal plane or lens shutter. The basic concept of the OM System is to enable the user to gather the components as necessary.”

While modular camera systems were familiar to medium format photographers (the Hasselblad 500 obviously leading the way) it was far more adventurous for 35mm cameras. The closes that a 35mm camera ever came to such a concept was Rollei’s short-lived Rolleiflex 2000F/3003 released in 1976.

One of the most forward-thinking aspects of the OM-X was that Maitani intended it to be used for all sorts of different photography – all you had to do was change prism finders, lenses and film backs depending on what it was you were shooting.

Rollei had their fair share of problems with their idiosyncratic camera, and it sounds like Olympus’s OM-X was equally challenging. “It is easy to take a camera apart by each mono-functions, but every mono-function modules should be flexible to be chosen on user’s demand,” Maitani told Akagi. “It is difficult to realise the flexible joint gimmick. When we started the development, technical difficulties impeded our progress.

“The company could not wait that long, so I was requested to release something first. The OM-1 is a combination of the most popular functions.”

The OM-1 became an incredibly popular camera, spawning a family of much-loved SLRs that stayed in production for 30 years until 2002. The OM-X itself never entered production, but Maitani’s intention – to build a whole new SLR series based around a dizzying amount of lenses, bodies and accessories – was fully realised.

Even in 2002, however, Maitani was playfully confident the camera might one day enjoy a moment in the spotlight. “Today, its concept is still evolving but has not been carried out yet.” With film enjoying a 21st-Century renaissance, is it time Olympus dusted off the blueprints?

(You can see more images of the OM-X here)

is this where reflex got the idea from?

I think the modular back on some later SLRs, like the Leica R digiback, maybe… but who knows!