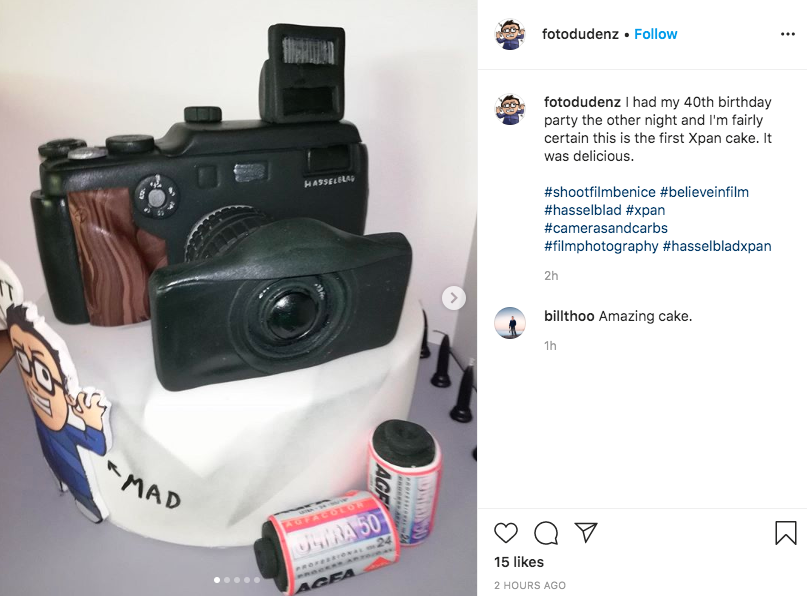 If you have someone significant in your life who’s a fan of the Hasselblad Xpan – well, the birthday cake bar has well and truly been set.

Film photographer @fotodudenz posted pictures on Saturday of his 40th birthday cake – a cake in the shape of an Xpan.

“I had my 40th birthday party earlier this evening and I’m fairly certain this is the first Xpan cake. It was delicious,” he said.

For those not in the know, the Xpan is a widely sought after panoramic camera produced by Swedish camera manufacturer Hasselblad in the 1990s and early 2000s, developed with the help of Japan’s Fujifilm. One of its major plus points was its ability to shoot both panoramic and normal 35mm shots on the same roll of film. A switch next to the viewfinder allowed you to flick between normal (24x36mm) and panoramic mode (24x65mm) as you saw fit.

The cake certainly will be a cheaper option than shelling out for an Xpan itself – after production of the improved Xpan II ended in 2006, the prices have inevitably risen.

Xpans sold at camera dealers rarely go for much less than £2,000 these days (though that is with a lens.

The cake is obviously a much sweeter deal…