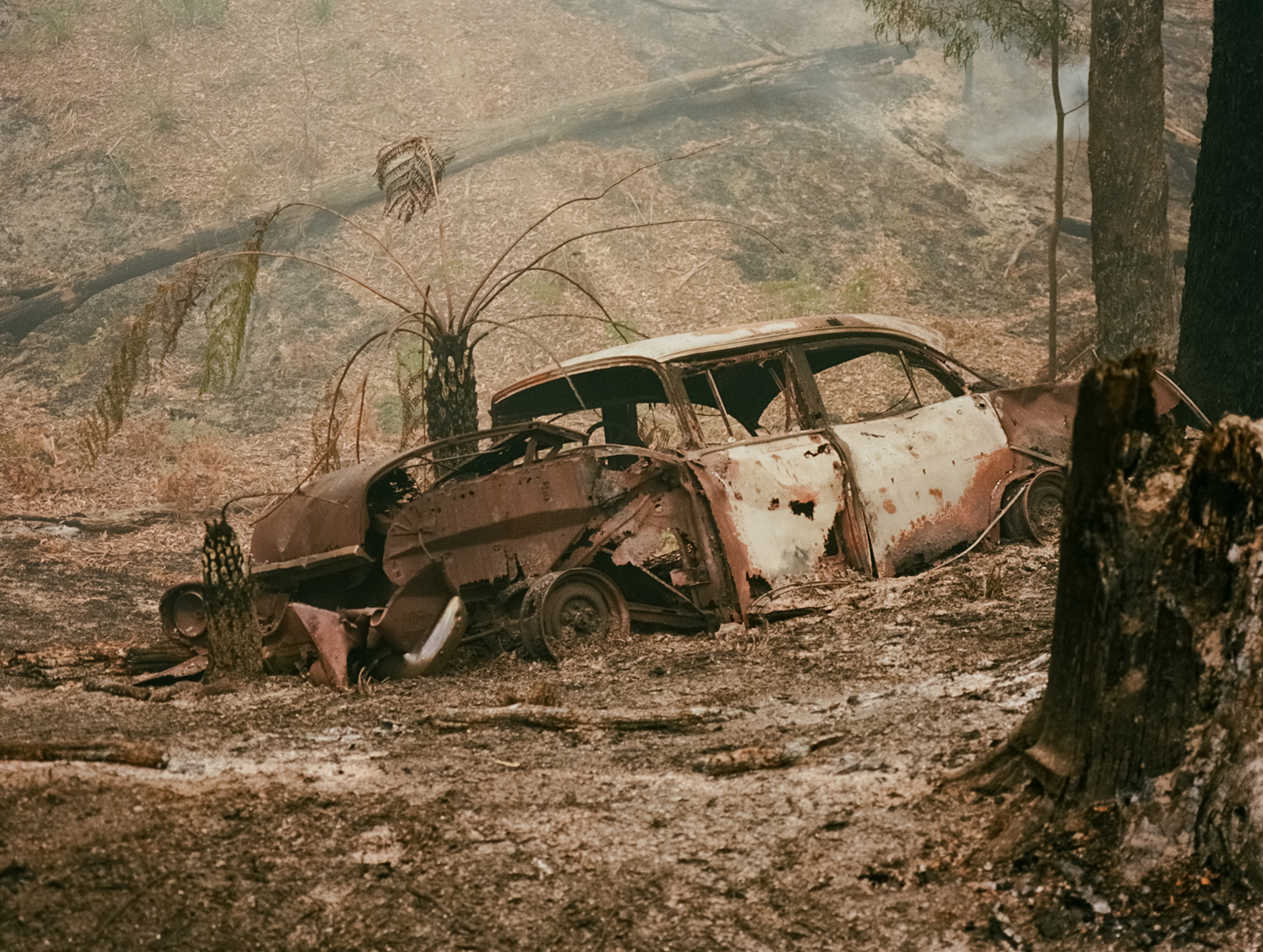 The fires that have scorched Australia are amongst the worst the country has ever seen.

Australians – especially those who live in “The Bush” – are used to fires. Blazes are common in summer as temperatures soar, and a natural part of the forest lifecycle; many trees will only seed after fires have passed.

But the fires which have ripped through this summer are much more serious . Some 18.6 million hectares of land has been affected, at least 30 people have been killed and up to a billion animals have perished in the fires.

Australia’s rural communities rely on the Rural Fire Service (RFS) staffed by volunteers. These firefighters are the ones who try to quell blazes before they destroy houses and livelihoods deep in the bush.

One of the volunteers fighting the blazes is Keith Marshall. After the fires have been doused or have moved on, he has shot the aftermath on some of his film cameras. They’re a fantastic, frightening document to the ferocity of the fires and the desolation they leave.

Whereabouts were you fighting fires?
“I was firefighting around my home town of Braidwood, NSW. I grew up here and now live and work here after a few years living in the city.”

But things were different back then, we were called out less, and the fires didn’t burn as hot, fast and unpredictable as they have been these last six weeks.

“The RFS is underfunded, and volunteers have been pulled away from their jobs, families and lives for weeks this summer. Being self-employed, with a nine-month-old daughter I had to make the choice to do my part in ways other than the official RFS channels.

“So I spent four weeks preparing my workshop and property for the incoming beast that we knew was coming, and on New Year’s Day, after the fire burnt up to my workshop (which was saved by preparation, luck and the kindness of a friend, that’s a whole big story in itself) I built a quick and effective mobile firefighting trailer and joined what has been coined the “Mosquito Brigade” (or “Mozzie Brigade”).

“The Mozzie Brigade is an organised group of local farmers and landholders who buzz around the fireground in their four-wheel drives armed with 1000-litre water tanks, fire pumps, CB radios and local knowledge taking the load off the RFS.

“The Mozzie Brigade has proven its worth this fire season with the official assets stretched so thin.

“So I and my sibling Aya spent two weeks patrolling the forest behind many fire affected properties putting out spot fires, burning logs and underground hot-spots. As the fire crews moved on, we got pretty busy…”

Is it the worst you’ve seen?
“We were incredibly lucky with conditions when the fire impacted around us, I live in a special little micro-climate that often has a cool, damp sea breeze on summer afternoons.

“The worst was the impact on peoples mental state, with weeks of stress the cracks showing in some of the community was pretty distressing.”

Describe what it’s like being in that environment with the fire around you.
“It’s pretty strange, you need to fight the urge to rush in and put out fire, when often it’s best to let it burn out to a dirt containment line. There must be a primal urge to fight fire, but calm is the best approach.

“After the event, moving around in the smouldering forest is pretty foul. Very heavy smoke, ash, dust and filth really gets into everything. We spent a week wearing respirators all day.”

What’s it like in those areas after the fire?
Very still, incredibly quiet…

What gear were you shooting on?
“I mostly shot on my favourite Fujifilm GA645, it’s a bit of a beater camera that I picked up cheap. It was totally busted after a tough life but I repaired it and got it back to life. I shot Kodak Ektar 100 this time around.

“I also ran some shots through an Olympus Mju-I and an OM-2 which I had refurbished and was doing test rolls to sell the cameras.” 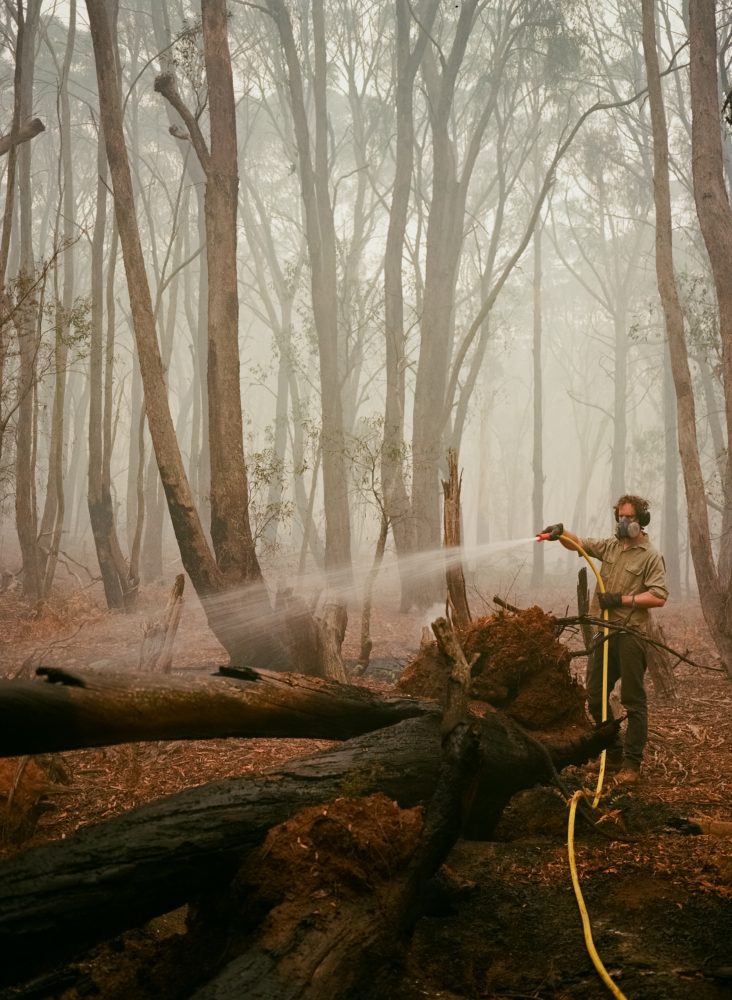 It must be difficult to switch to photography mode in that situation.
“Yeah, getting the camera out when you are wearing helmets, gloves and respirators is pretty tricky, especially when you are pretty filthy! None of the really stressful moments got photographed for obvious reasons!”

How did you get into film photography?
“I’ve always had mixed results with digital photography, I just didn’t ‘feel’ the shots I was getting, then Aya dragged me into their film obsession and it just exploded! I got hooked on a Ricoh GR1 and now I reckon I’ve got 10-20 cameras I use regularly.” 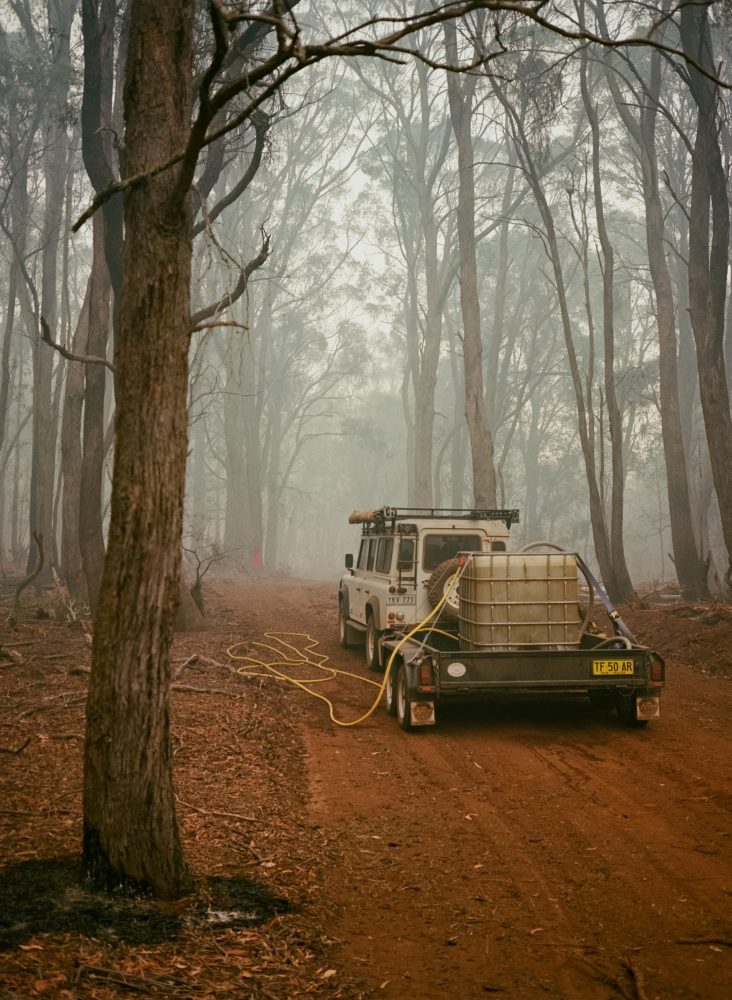 What do you do when you’re not fighting fires?
I am a machinist and craftsman, I build handmade steel bicycle frames in my workshop which backs onto the bush. I also repair and refurbish film cameras to sell as a bit of a hobby and so that I can bring cameras back into use!

A lot of the most immediate images from the fires were digital – why shoot film?
Film is just how I express myself, I’ve never not got a film camera on me! I love having to consider my images and have a canister of memories with 36 or 16 really great shots, rather than an SD card clogged with junk.

Perused this a few days ago and just had a moment to really read through it. Amazing images; thoughtful compositions and touching color palette. Important images too! And insightful to hear a first hand account of the fires. Thanks for sharing some film work that is culturally valuable!