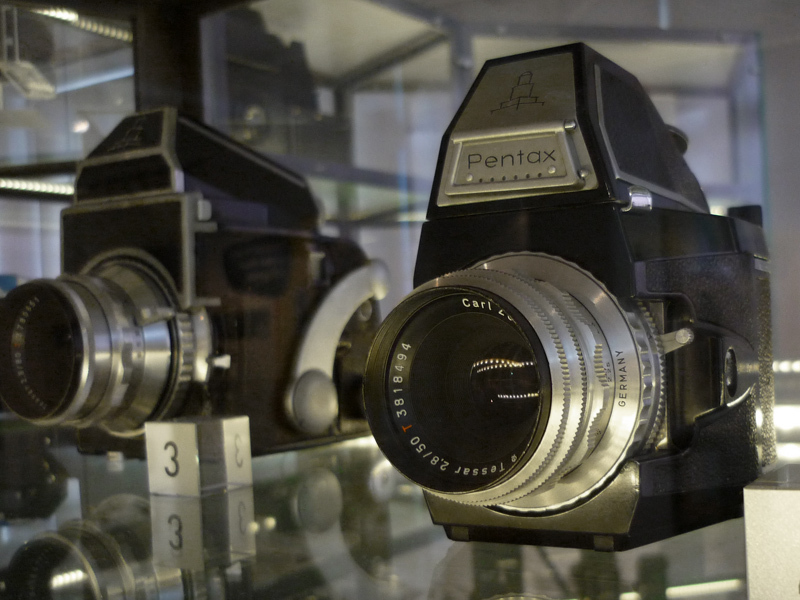 In November, the Pentax brand will mark its 100th anniversary.

Asahi Kogaku Goshi Kaisha began life in November 1919, producing spectacle lenses from a small shop in the Toshima district of Tokyo. But film photography fans will know it best from that name it started sporting on a camera in 1957 – Pentax.

Pentax is a name synonymous with a range of enthusiast 35mm cameras – classics like the Spotmatic and the K1000 – and its range of superlative Takumar lenses. Pentax lives on to this day, as a subsidiary of imaging giant Ricoh, with a range of well-regarded digital SLRs keeping the brand alive in the 21st Century.

Asahi, however, weren’t the first camera maker to attach the Pentax name to a camera. In fact, the Pentax name was originally dreamed up behind the Iron Curtain, by the East German camera manufacturer known as VEB Zeiss Ikon Dresden.

VEB Zeiss Ikon Dresden was one of the East German companies formed after Germany was split in two following the end of World War II. Much of the pre-war German camera industry – including the likes of Leica-glass maker Zeiss – were based in Dresden, a city which now found itself in Soviet-aligned East Germany.

There was some wrangling over names and brands at this time; East German companies having to give up the rights to their names if they wanted to market them in the West. It even affect ted film-makers – with the original Agfa film plant in Wolfen, East Germany now having to name itself ORWO (“Original Wolfen”).

In 1954, Zeiss Ikon Dresden began work on a new 35mm camera. It was designed to use a new 50/2.8 Zeiss Jena lens but looked completely unlike most 35mm cameras of the age; it was far more like a modular 120 camera of the time, such as the Hasselblad 500 or the Soviet Salyut. One of the most striking features at first glance is the camera has what looks to be an integrated prism (it looks like a larger version of the one which would later be found on the Praktica IV SLR cameras made by Pentacon).

The historical site Zeissikonveb.de by Marco Kroger has some fantastic detail on this camera. Kroger, having reviewed patents, found that the first version of the camera was intended to be a 6×4.5 120 camera, with the film loaded in removable cassettes.

According to Kroger, “at the same time it must have been working in parallel on a second prototype designed for the perforated 35mm film. Also this material should be accommodated in exchangeable cassettes.” Zeiss Ikon Dresden lodged a patent for this new 35mm camera in 1953, and Kroger’s site shows some fascinating technical drawings of the camera, including a version with a much bigger film magazine for technical or industrial applications.

The Pentax’s shape was odd, but it did allow for it to be held in one hand and operated comfortably when held up to the eye. It was however, a deeply unconventional design for the time, especially with removable film cassettes.

“This Pentax 24×36 would have sort of anticipated what was released about a quarter of a century later by Franke & Heidecke as Rolleiflex 2000F,” Kroger writes on his site. “For such special cameras, there was always only a small market. However, a large company like Zeiss Ikon would have been wrongly disposed of in the segment of small batch production.” Kroger points out that Praktica cameras – much simpler and conventional in shape – were already selling in huge numbers. The Pentax was innovative, but perhaps too innovative.

So Zeiss Ikon Dresden had come up with a name but no workable camera to attach it to. They sold the name “Pentax” to Asahi in 1954, and the Japanese camera maker used the name for its first pentaprism SLR – the Pentax – in 1957. The camera, with its instant return mirror and pentaprism viewfinder, was a huge success and influenced the design of SLR cameras for decades after.

And that innovative East German Pentax? It never entered production, but the prototype is still with us. You can find it at the Museum of Science and Technology in Dresden, a reminder both of the innovation of the East German camera industry and the power of a perfect name.

Asahi bought the name “Pentax” from the East German camera manufacturer VEB Zeiss Ikon, which probably derived it from PENTaprism and contAX, the deal also incorporated the use of the rights to use the 42mm screw mount. This screw mount was originally developed by Carl Zeiss Jena for use in their Zeiss Contax S, the first M42 mount camera released in 1949.

Pentax’s adoption of the M42 mount was responsible for the world-wide success of the mount, which eventually led to it being called the Universal Mount.

Yep, that’s in the piece toward the end.

I’m not so sure that ‘Zeiss Ikon Dresden (…) sold the name “Pentax” to Asahi in 1954.’ A search within the database of the German Patent and Trademark Office (DPMA – Deutsches Patent- und Markenamt) https://register.dpma.de/DPMAregister/marke/register/DD607589/DE shows that the request for the Pentax trademark was filed on 22 September 1952 and the trademark registered on 11 August 1955. The first registered event concerning the registrant itself is a change in denomination in 2002, Asahi Kogaku Kogyo Kabushikikaisha (Asahi Optical Co.) becoming Pentax Corp. The second and, as of today, last one took place in 2012, when Pentax Corp. were merged… Read more »

Thanks so much for this – I’ll update the story. Cheers for bringing it to my attention.

You learn something ever day! Very interesting to know that Pentacon used the Pentax name!

Actually it’s VEB Mechanik Zeiss Ikon that did so in 1954.

VEB Pentacon Dresden only appeared in 1964 as the new name of the entity resulting from the merger of several Dresden camera manufacturers, including Zeiss Ikon, that took place in 1959.