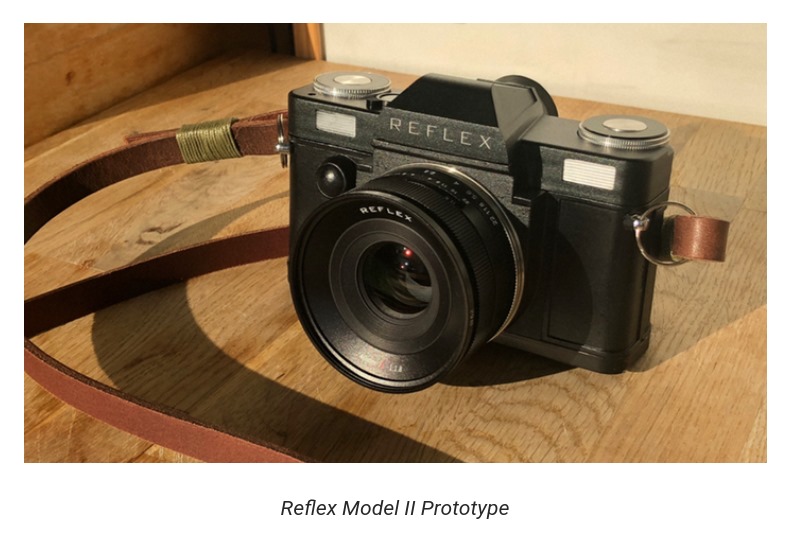 A new version of the Reflex SLR appears to have built, with beta versions going out to testers.

The Reflex team sent an email to backers that Mark II prototypes were almost ready to send out after initial run of 75 pre-production units.

The email says: “Over the summer a lot of work has gone into moving the Reflex I closer to its production deadline and while we continued to develop the new shutter, other parts of the camera kept evolving as well…

“Due to an entirely new shutter unit, a chassis redesign, adding a more powerful processor and battery, upgraded controls, new winding mechanism, new dark slide design and some aesthetic and ergonomic improvements, we can no longer speak about the model we presented back in October of 2017.

“Add to this an aperture controlled ARi Plate and we have a model II. With this we’re gearing up for a fresh start and have informed our manufacturing partners to start tooling up for the new model instead. Full specs will follow soon.

“The Reflex II will come in both black powder coating and metallic.

“A series of 75 pre-production units will be produced ahead of principal manufacturing and sent out to a selection of camera testers ranging from professionals to hobbyists. While we received more than hundred requests in the testers program, we want to allocate a minimum of 25 units to our Kickstarter backers.

“To anybody who is an actual camera backer, we will contact you in the next month to see who’s interested.

“Based on our success rate in this department, we need to be careful with promises and dates, but we will be present at the PhotoPlus NY, October 24-26 in some form or way. The working scenario is that we bring the Reflex model II and 40mm lens.

“In the weeks to follow we will be working hard to make this a reality as we have continuously done so, but we also understand we have lost the trust and patience of some of the backers. This is only normal as we are now one year past our original shipping date. The only thing we can say here is that we are dedicated to make it happen.

“Otherwise we would not have persisted this long. So to all of our backers, we can only say thank you and we are really doing all we can as not to disappoint you.

The modular SLR is designed by Laurence Von Thomas and was successfully funded on Kickstarter in November 2017.

The camera has removable film backs which means different films can be shot without rewinding a half-finished roll, and it also had a modular lens mount which can also be changed mid-roll.

In January, Reflex’s team said they would be designing the camera’s shutter unit in-house because of the difficulties in finding a suitable shutter unit from suppliers.

Earlier this year the Reflex team said the camera would go into production later in 2019, though there had been no further announcements until today.

Fingers crossed they send one to Kendall Jenner 🙂

As one the backers, I’d like to think something is going to happen. I’d be very pleased if it did. As there are no real meaningful photos on Kickstarter, I’ll first raise my hopes when I see some or when I hear something from the testers. In contrast to Hamish’s pixl-latr project, who has always been good with his information, the Reflex people have not exactly exuded confidence.

Rome wasn’t built in a day.