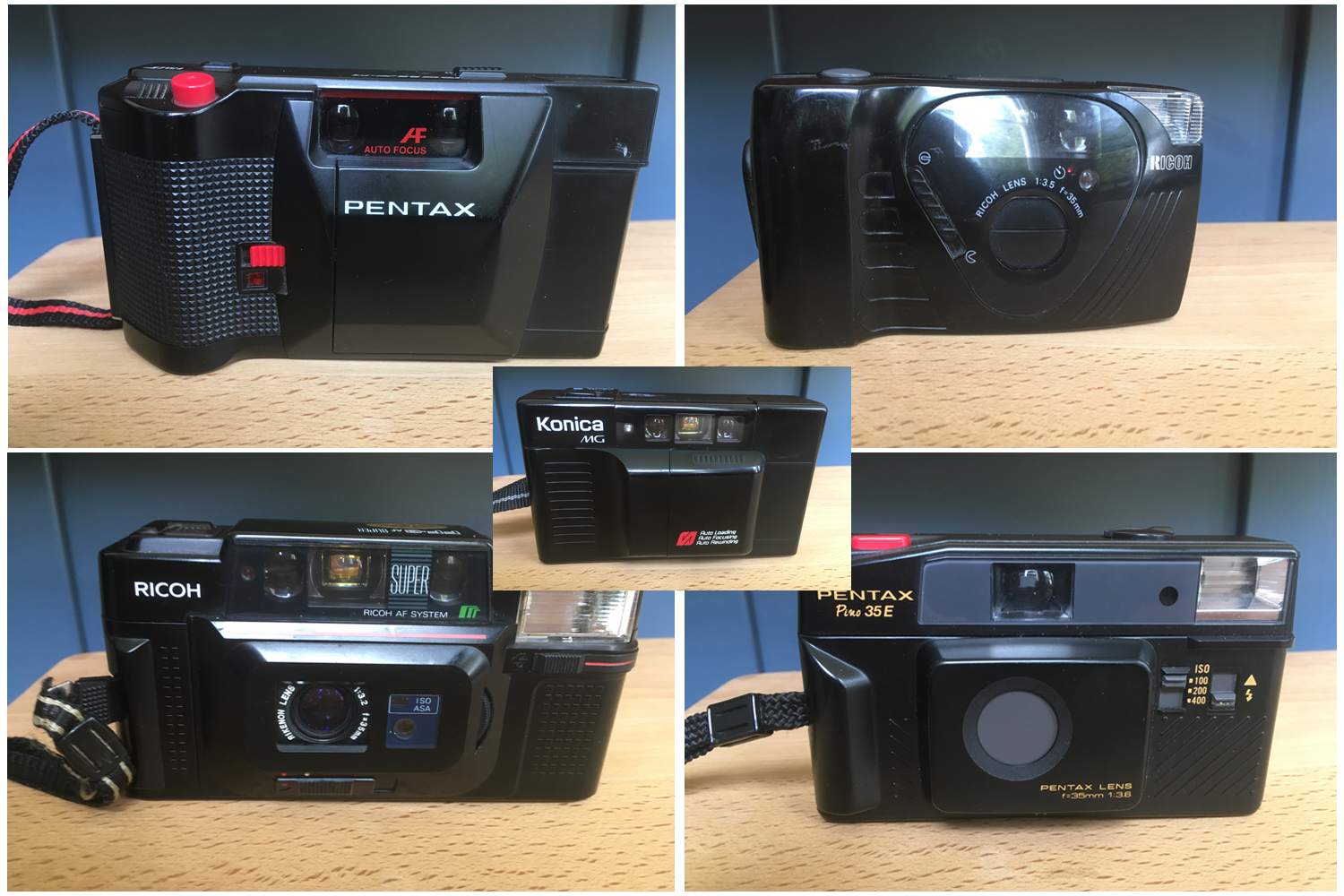 The compact cameras that get all the attention at the moment are the ones with the heftiest price tags.

Many film photography blogs and YouTube channels fixate on the dwindling ranks of premium film compacts from the 1990s – the Contax T2 and T3s, Nikon Tis, Minolta TC-1s and Yashica T4/5s whose price increases from year to year.

Granted, all these cameras are miracles of miniaturisation, blessed with whisper-quiet motors and tack-sharp lenses. But few of us have the deep pockets needed to splash out on the likes of the Contax T3. Cameras that cost over £1,000 chew up a lot of money that could otherwise be spent on film and development.

A quick look through the archives of Hamish Gill’s site 35mmc throws up a long, long list of film cameras small enough to pop in a pocket. Every major camera manufacturer – and a lot of the smaller ones too – built compact models in the 80s. Autofocus technology had matured enough to be both more reliable and cheaper to use. Photographers who might have relied on the likes of the Olympus Trip 35 now had a pocket camera that could do the focusing for them.

All of the cameras listed here are models I’ve used myself. Some of them are an absolute steal – the Pentax Pino 35E cost me £5 in full working order – and all are common enough that you should be able to pick them up for no more than £50. No, they’re not likely to be seen hanging off the arm of a Kardashian any time soon, but as you can see, they’re still capable of excellent results. 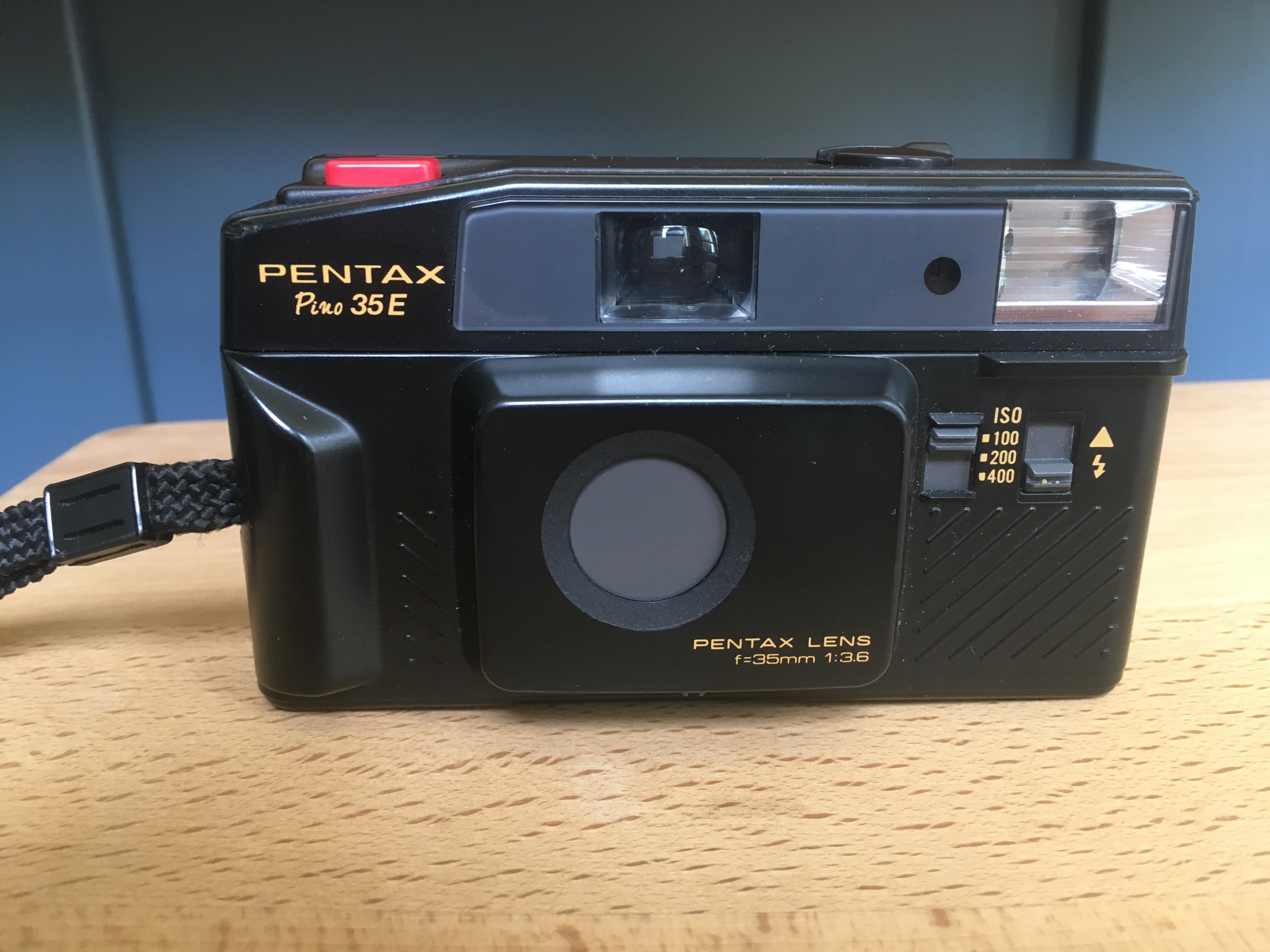 This model isn’t auto-focus but the next best thing for novices – focus-free.

The Pino range was made by Pentax in the 1980s, aimed squarely at the absolute amateur end of the photographic market. The original Pino (1984) had three aperture settings based on sunny, cloudy-sun or cloudy weather and a fixed shutter speed of 1/125. The battery-powered meter only warned if the lighting was too low for the ISO you had set. You wound the thumb on with a thumb wheel like on a disposable or an Olympus Trip 35.

The later Pino 35E streamlines this process even further. The aperture and speed are all taken care of by the camera’s electronic brain, leaving you to just remember to load film, set the right ISO and advance the film. 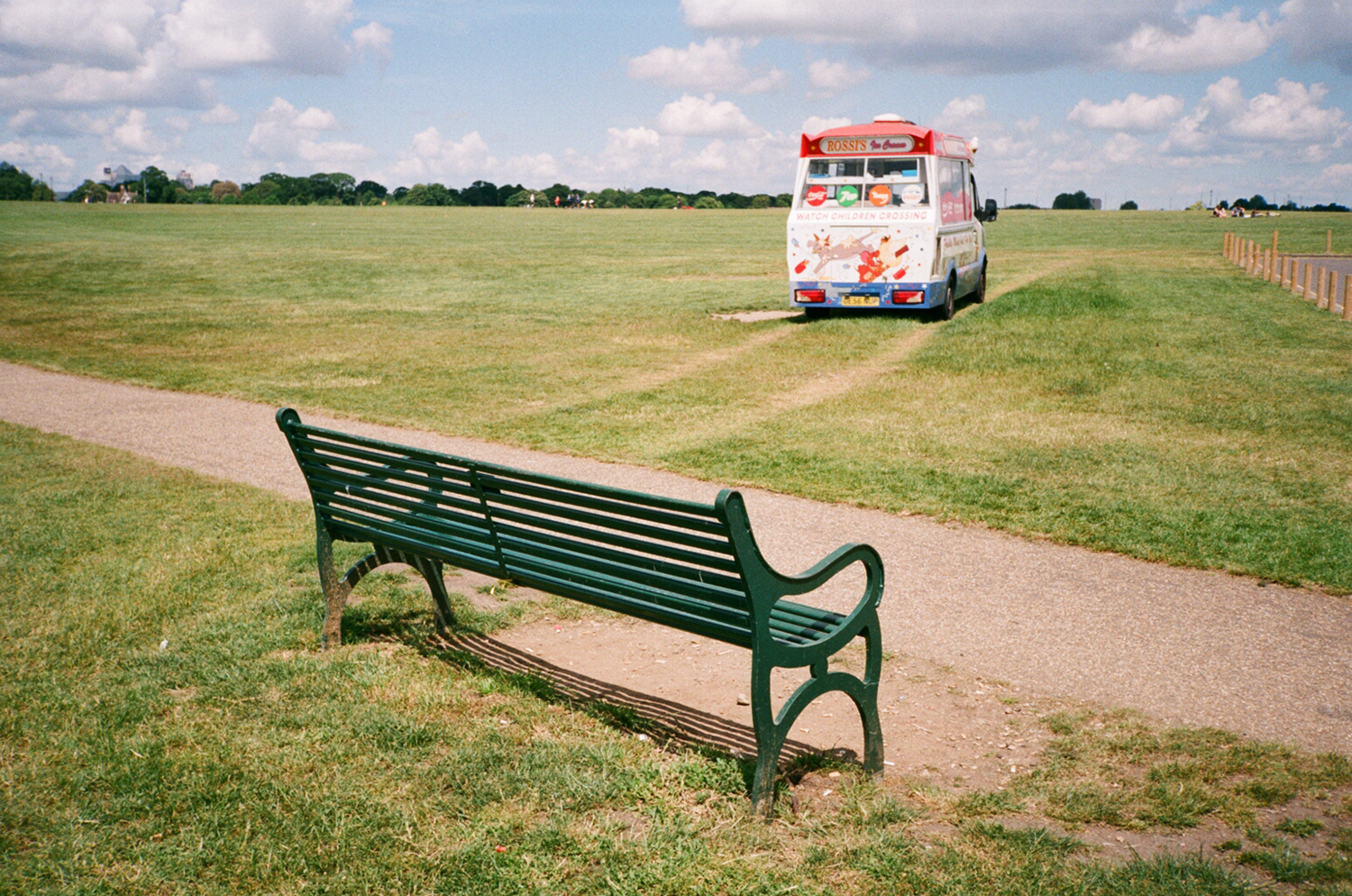 The camera will focus from 1.5 metres through to infinity, and the three-element lens is no slouch when shot at narrower apertures.

I was actually amazed at how sharp some of the images in sunny conditions actually were.

This a great creative block-clearing compact. All you have to worry about is composition. 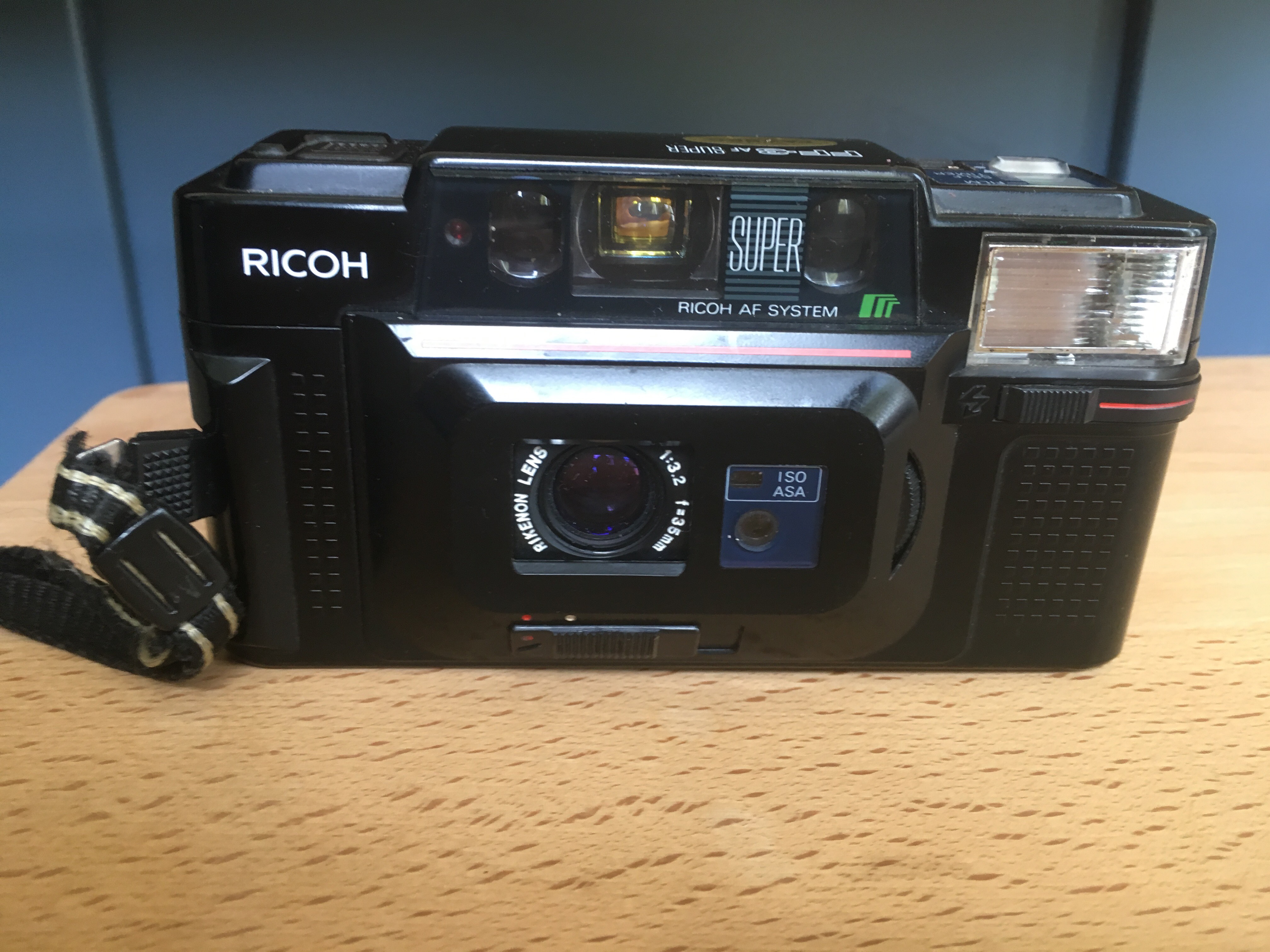 Short of having Space Invaders and Pac-Man stickers on it, the FF-3 AF Super couldn’t be more 80s.

A chunky rectangle of plastic, it’s one of Ricoh’s range of FF compacts which ranged from the Minox-like FF-1 to the space-age FF-700. The lens is a five-element 32/3.5 Rikenon that’s sharp and contrasty. 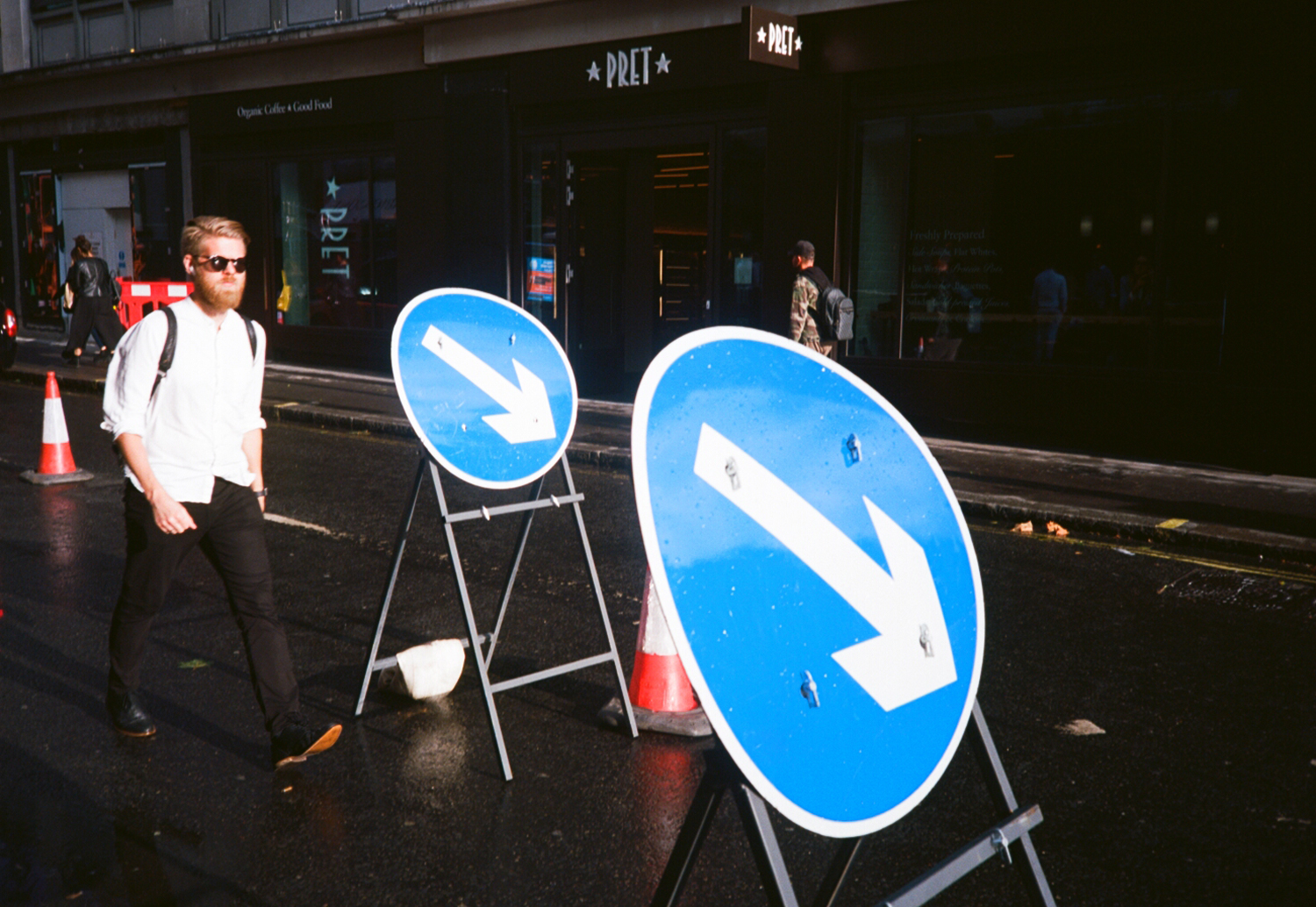 The FF-3’s not the camera to use if you’re aiming for Leica-level quietness; the winding motor makes a sound like a waste disposal unit with a fork stuck in it. 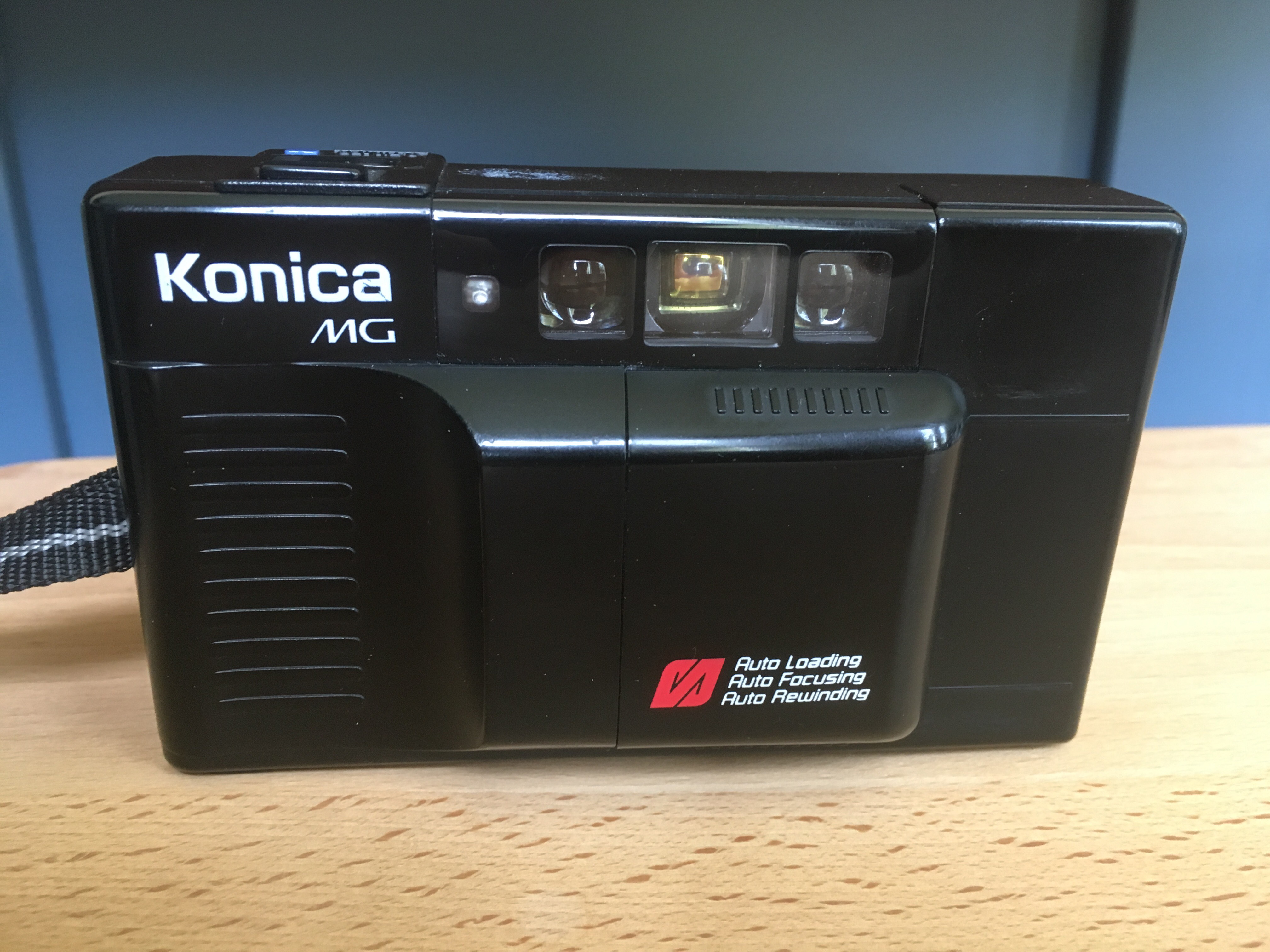 Konica is a name that often gets forgotten when it comes to highlighting Japan’s film camera industry. But they produced the fantastic Autoreflex family of SLRs, the superlative Auto S3 rangefinder and the cheerful C35 compact.

The MG is one of Konica’s compacts from the mid-80s. It’s not the smallest compact, but it’s a well-specified autofocus Camera that’s just nice to hold. The 2.8 lens lies behind a clamshell cover like the Olympus XAs or Mjus, with a flash on the top left side that pops up when needed.

The camera isn’t DX-coded; you set the ISO underneath the lens. The top ISO is 1000 which means you can load it with 800 print film or push black-and-white. 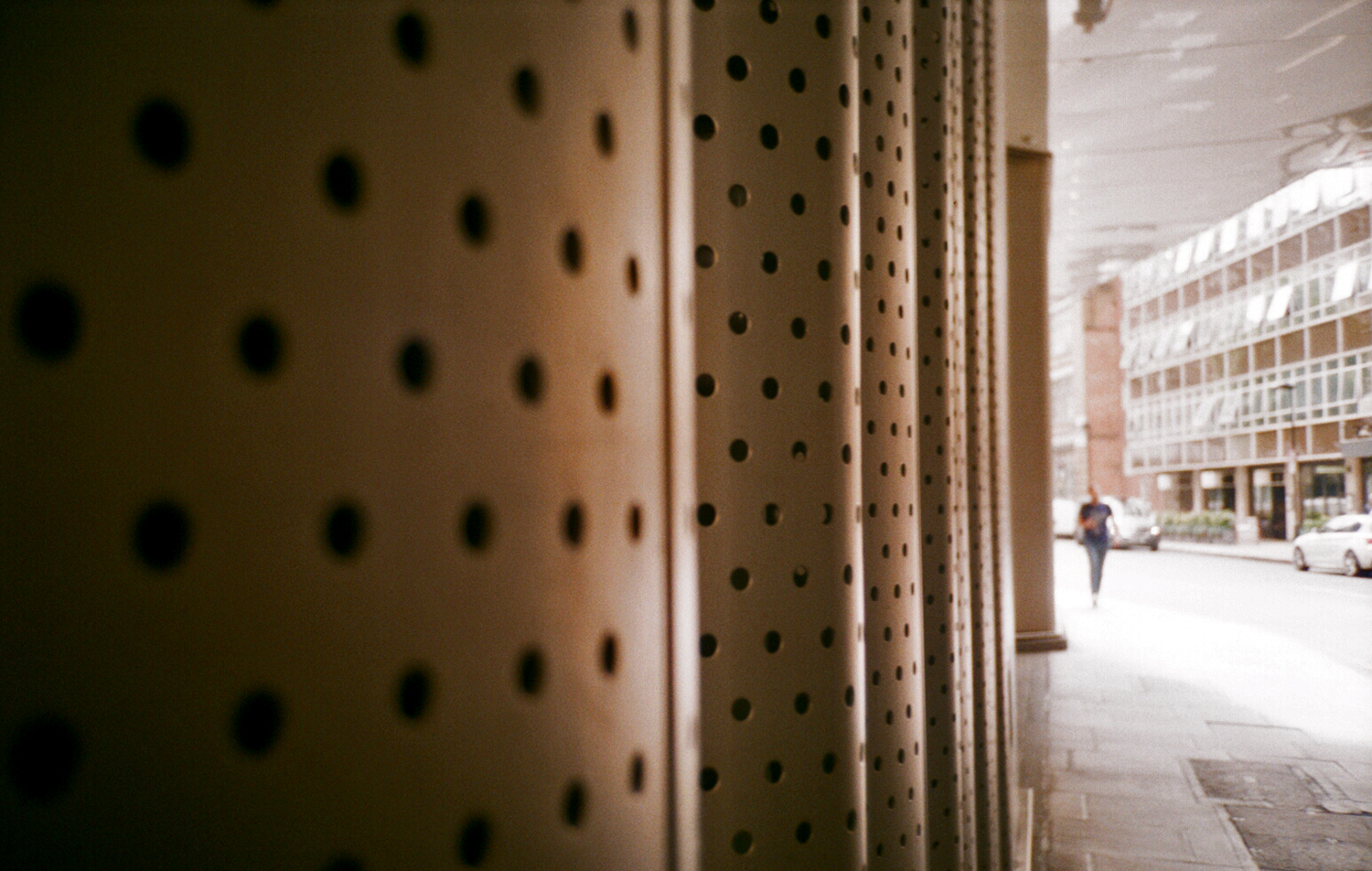 The MG is a really comfortable camera to use, possibly partly because of its size. The lens is sharp enough, too, especially in good light. It‘s a lot quieter than many cameras of the period, too, firing with a pleasing “ker-chink” before the whine of the wind-on. 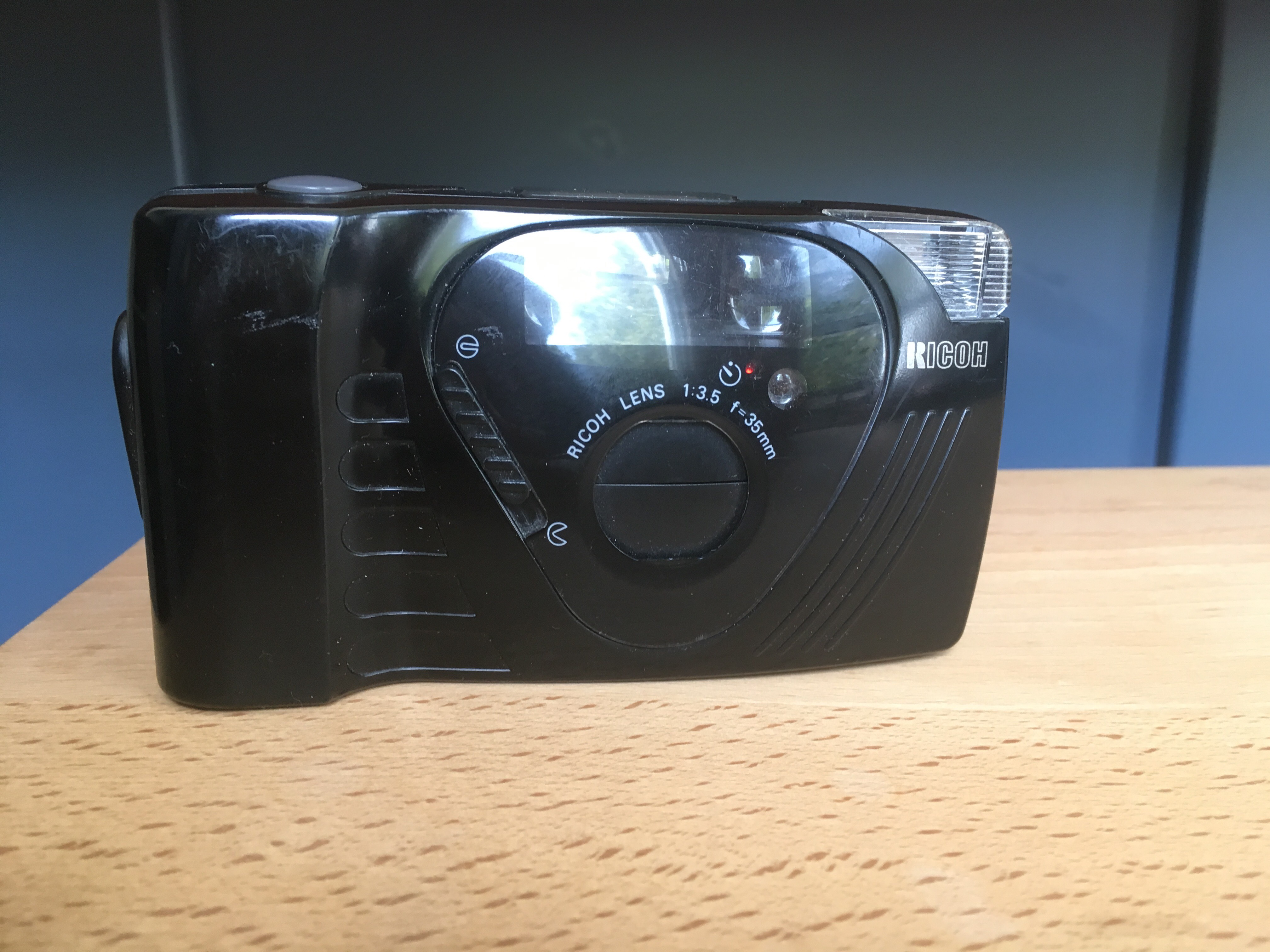 The FF-9 looks like a much more modern cameras than the FF-3, even though only half a decade separate them. Unlike most of the cameras in this list, it’s a DX-code camera that automatically registers the DX code of the film (and if the film isn’t DX-coded it defaults to ISO 100). It looks much more like the compacts of the 90s – streamlined.

The FF-9 isn’t exactly a good looking camera but it has a certain plasticky charm. Its strengths lie in its simplicity and its sharp lens. 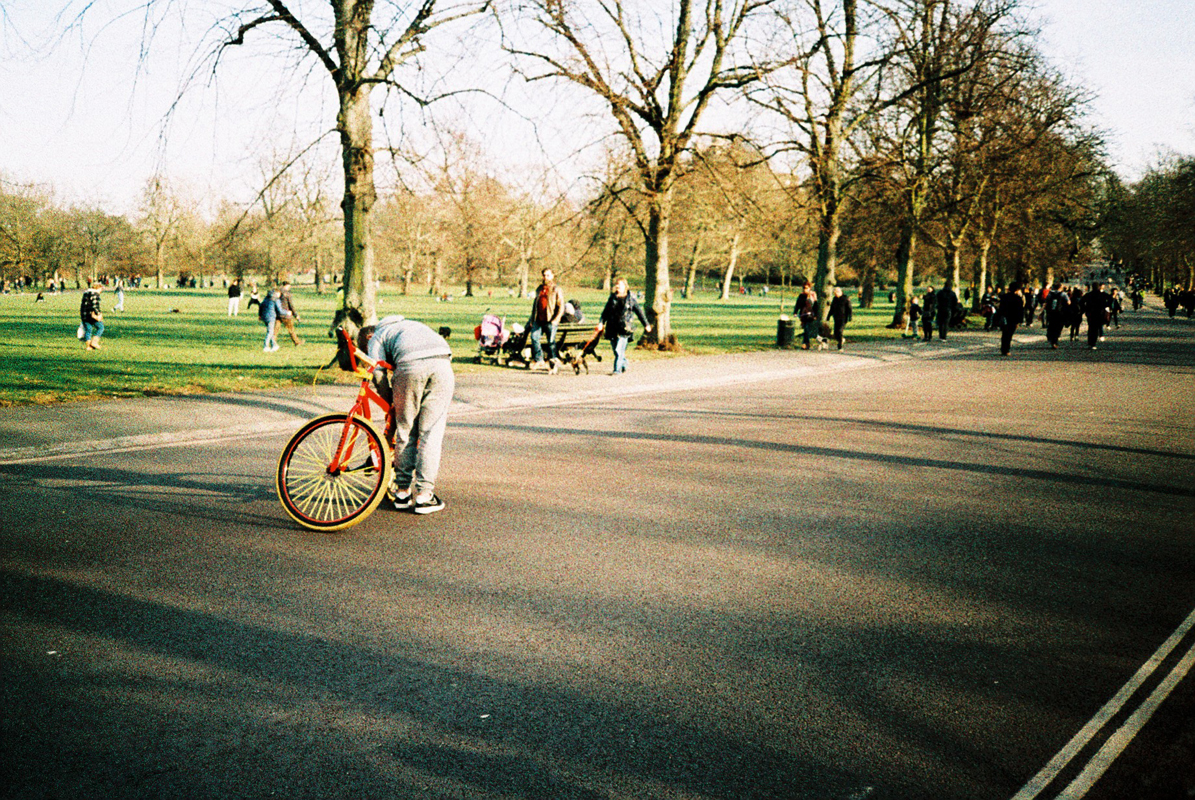 Anything that complicates the process of taking good pictures, the FF-9 says “to hell with it” and does away with it. The frame counter is an LCD panel on the top, which also tells you the state of the battery. There’s a tiny self-timer button recessed into a groove, like something that might be found on an 80s-era handheld computer game. The flash pops up from the body when the camera decides it’s needed. There’s nothing to get snagged or caught.

The FF-9’s 35/3.5 lens is a cracker. What’s more, this is a perfect compact for street photography because the shutter and wind-on are much less intrusive than those found on the FF-3. 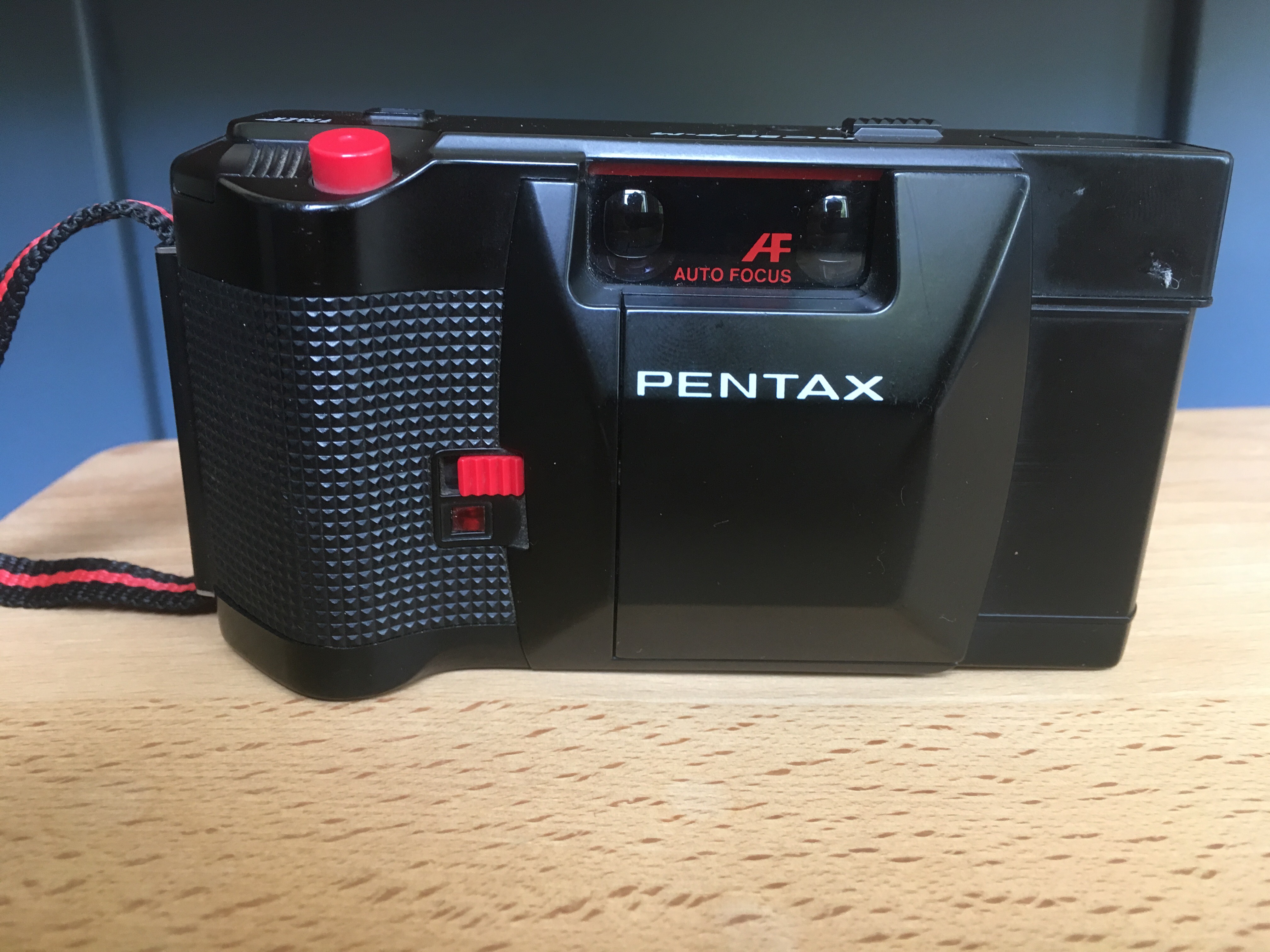 When I appeared on the Sunny 16 podcast some months back with British photographer Anil Mistry, this was the compact camera he recommended, as much for the fact that prices are still sane as for its features. I put it on the list of compacts to look out for and was lucky enough to find one at the Photographica fair in London a few months later.

The PC35 AF-M is the chunkiest of the cameras on this list. It has a slightly raised area on the right hand front of the camera as you’re holding it with knurled, textured plastic which serves as a very effective hand grip. The red switch necks to the lens opens the protective cover with a very satisfying movement. 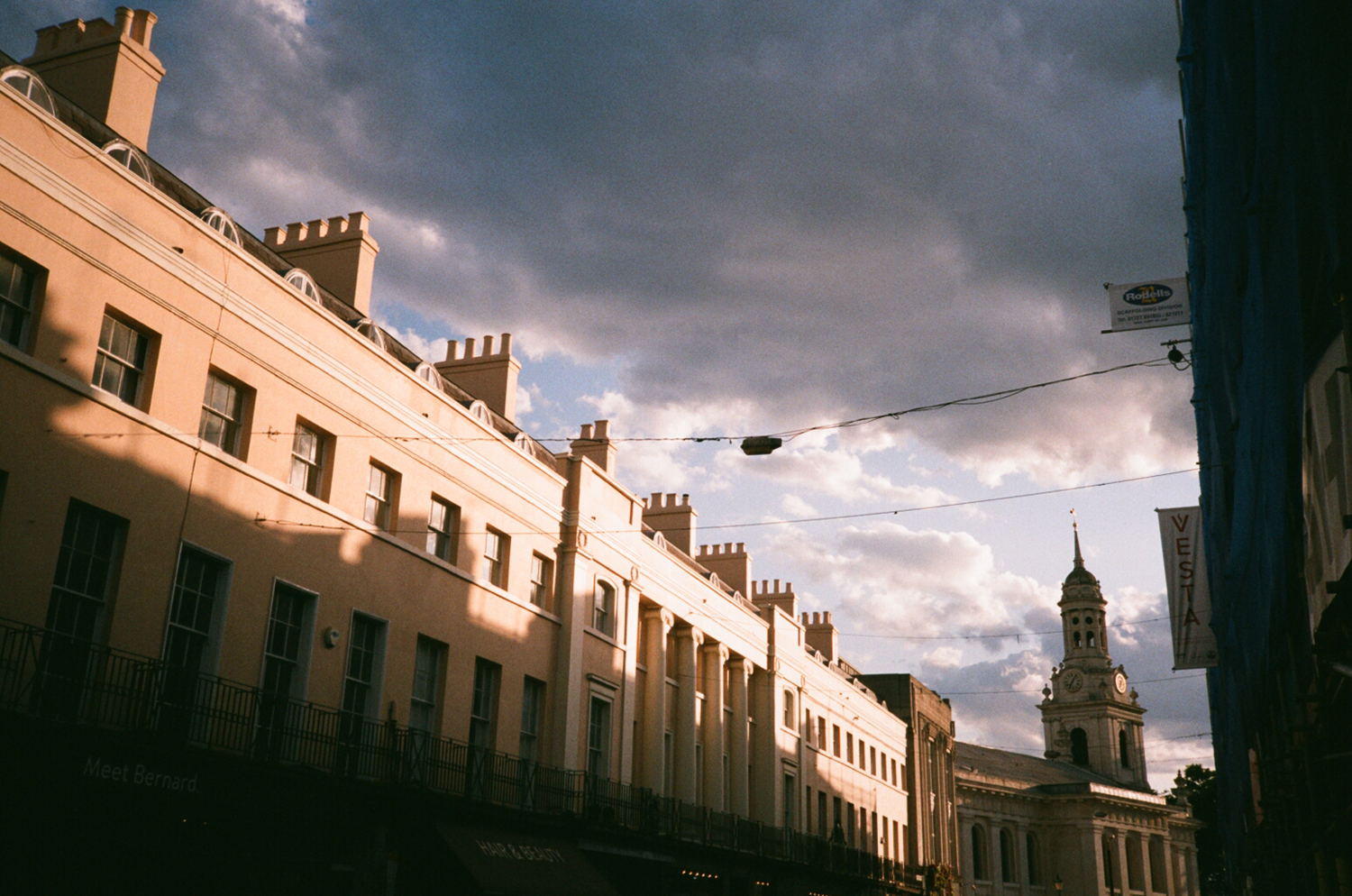 Then there’s the lens. The 35mm lens in this camera opens up to f2.8 and boy is it sharp. Really sharp. The Pentax is quieter than most when it comes to shooting and winding too – maybe there’s some heavy duty soundproofing in its chunky frame.

One other quirk is the useful+ 1.5 backlight compensation invaluable if you’re shooting someone with a bright background behind them. It’s a useful feature only normally found on much more expensive cameras.

Do you shoot old-school compacts? Which are on your faves list? Let us know in the comments below.

I have the last two on your list, though I haven’t tried the Ricoh yet. The Pentax though, wow, it is a super camera and one of my favourites. You are right it is super sharp, a bargain. I am eager to try the Ricoh now which I got for £2.