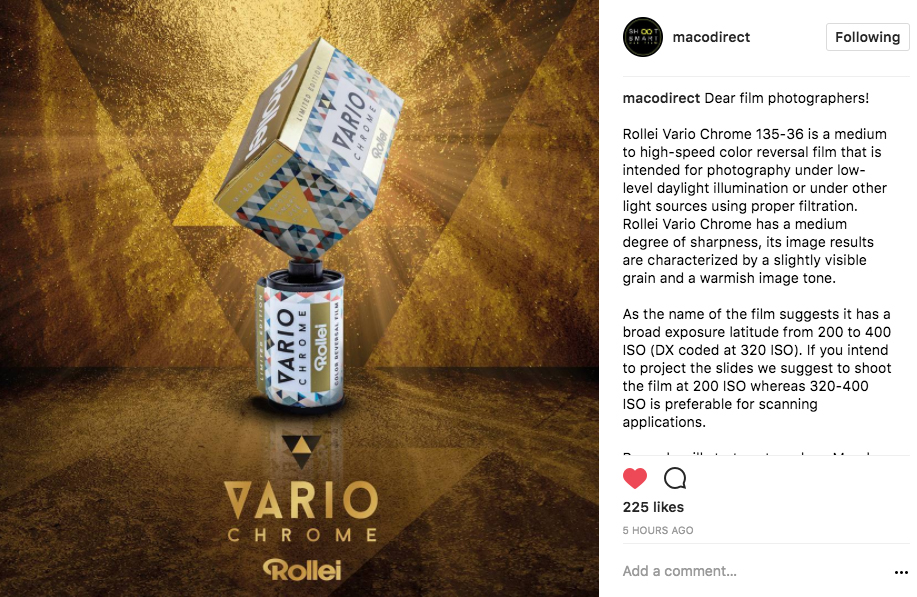 While Film Ferrania gears up for production of its delayed Chrome 100 film, and Kodak prepares to bring its famous Ektachrome slide film back from the grave, a new slide film has been announced.

The film is being produced by Maco Direct, a German film distributor which also produces films under the Rollei brand.

In a statement via a post on Instagram, Maco Direct said: “The Rollei Vario Chrome 135-36 is a colour reversal film with a wide range of latitude ranging from 200 – 400 ISO. It can be processed normally with the E-6 process without any adjustments needed for exposures in this range.

“Pre-sale will start next week on Monday July 3rd. We expect the supplies to arrive in week 28 so that we’ll be able to start shipping between July 10th and 14th.

“We hope you’ll like the film as much as we do and thank you all for the support.”

The release of Vario Chrome comes hot on the heels of Film Ferrania’s P30 80-ISO black-and-white film and Bergger’s Pancro 400, another monochrome film which was announced at the end of last year.