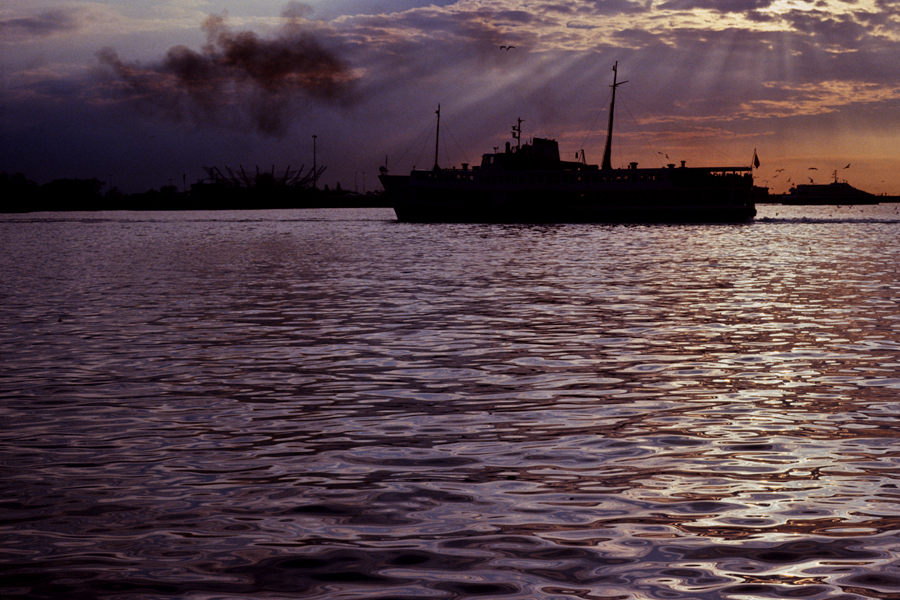 November in Istanbul means golden light; the days are short, but full of rich reddish light, one that brings an extra, golden dimension to colour photos.

Taking short trips is a good excuse to shoot on as many different types of film as possible; I have about 300-odd rolls of film cooling in my freezer, much of it old Kodak and Agfa slide film that’s been discontinued, and I’m always on the lookout on eBay for a few more rolls. This year I managed to find a batch of expired Kodak Ektachrome 100; it’s the pro version of Kodak’s Elite Chrome slide film. Both brands have recently been discontinued by Kodak, with the last batches slowly but surely reaching the end of their expiration dates.  This generation of film shooters are using some of these once-proud brands’ final few frames.

Ektachrome was Kodak’s ‘other’ slide brand alongside Kodachrome; it may never have been honoured in song by Paul Simon, but it was a staple in many pro photographers’ bags. Ektachrome helped build the reputation of National Geographic, and was available in a range of speeds – including a beautiful 400-speed emulsion perfect for pushing in low light. The 100-speed is perfect for bright sunny days, and even when expired a decade or more can still capture luminous colours.

After a few days of rain showers – no good for anything other than black and white photography – I made the most of a bright, sunny day to head from European Istanbul to the Asian shore. Kadikoy is one of the busiest districts in the city, home to more than half-a-million people and a wealth of alternative bars, music venues and shops and one of Istanbul’s biggest food markets. It’s also home to one of Istanbul’s best restaurants, Ciya Sofrasi, which is worth the ferry trip alone.

Kadikoy’s ferry terminal connects it both to the European city and to districts further up the Asian shore; the port and quayside are constantly busy, full of commuters and hawkers, newspaper sellers and locals weighed down with shopping bags. It’s one of Istanbul’s very best spots for people watching, especially as so many of the people are busy heading somewhere.

Ektachrome was perfect for capturing the reddish light as the afternoon clouds descended, especially noticeable in the picture of the ferry above. There’s something pleasingly retro about the colours on Ektachrome, like the pictures have been sat in a shoebox for the last 20 years waiting to be looked upon once again.

Old film suits old lenses; I usually have a few cameras knocking around my camera bag when I’m out and about, but usually have a Pentax ES II to hand. It’s the last camera Pentax made for its famous line of screw-mount Takumars, lenses which boast bold contrast and rich, creamy bokeh. The picture of the three headscarved woman, who had been taking photos of themselves on their phones on the quayside, has a timeless feel to it. There’s not many times I can pretend to be a National Geographic photographer, but this may be one of them.

Check out more pics from my Istanbul trip on Flickr, or my review of the Pentax ES II.

Have not used slide film for years; when shooting film now I only use b&w. In the 80s I shot mostly on slides; about 20% Ektachrome and 80% Kodachrome. I always thought Ekta was a little bluer and ‘colder’.
Have a good Christmas.

Ektachrome has always been my favorite slide film for cross-processing (even more than Elite Chrome); the first roll I ever shot was Ektachrome 200G and the Ektachrome 100+ was my jam for quite a while. Also, Kadikoy is my favorite neighborhood in Istanbul– I live there! Wonderful pictures, as always.

It’s a place I want to see more of, love the contrast between the touristy Sultanahmet and the hustle and bustle of the Asian shore. Try some un-xpro’d Ektachrome – so beautiful in light like this.