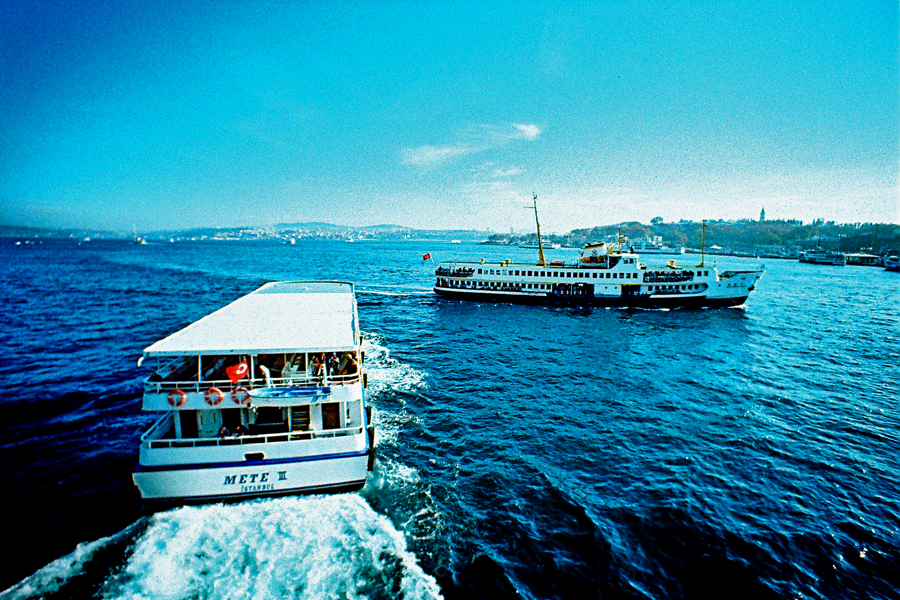 Istanbul is a city perfectly suited to the boosted contrast and crazy grain of cross-processing. The blue black Bosphorus, the strong Mediterranean sunlight, the streets filled with hawkers and markets teeming with produce, the neon signs screaming the names of clubs and bars off the crowded thoroughfare of Istiklal Caddesi.

I spent a week in Istanbul in November; it’s one of the best times of the year to go, as the summer heat has eased off, the tourist crowds have reduced and peak season prices for hotels have tumbled. And while the days are short – the sun’s slipped beneath the horizon by 5pm – the rich golden light is an incredible boon for photographers.

Cross-processed slides work superbly well with Lomography‘s LC-A cameras – that trademark xpro look is what helped make the Lomo such a craze in the first place. And while the film’s that helped create the craze are sadly no longer made, they’re still possible to find on sites like eBay, or camera shops which keep a stock of expired film.

On this trip I took a few rolls to shoot xpro on a Lomo LC-Wide.  This is the latest incarnation of the Lomo LC-A, the Soviet-designed compact which created one of analogue photography’s most enduring cults. The LC-Wide’s 17mm lens is an ultra-wide view of the world, great for fitting in as much as possible without creating fisheye distortion. And because the LC-Wide’s so small and quiet, it’s not as obtrusive as shooting away on an SLR, especially if you’re trying to get candid street shots.

The ultimate film to shoot xpro is the original Agfa Precisa CT100; when cross-processed the colours are super-saturated, but it’s the blues that are boosted the most – great for when you have sea and sky in the background. Also lurking in the pockets of my camera bag was some Kodak Elite Chrome 100 – Kodak’s consumer-grade slide film that also happens to be perfect cross-processing. It doesn’t quite create the super blue of the Precisa, but its colours and grain are rich and atmospheric.

Istanbul’s massive size belies the fact it can be a very walkable city – much of the historic sights crowded in the districts around the Golden Horn on the European side. Around here are some of the city’s busiest districts, including Eminonu, a bustling hub of commuter ferries and electronics stores (and with a bunch of secondhand camera stores too, for those that like haggling).  The artery that connects the old Greek quarter of Galata and the mosque-heavy tourist mecca of Sultanahmet is Galata Bridge, thronged day and night with anglers plucking fish out of the waters, the pavement full of buckets of shining, silvery fish, and the waters below noisy with the foghorns and roaring engines of the ferries.

The LC-Wide is perfect for getting close to the four-legged citizens of Istanbul; the hordes of cats who also call this historic city home. I’ve written about this aspect of Istanbul life before – cats are an integral part of the city’s character, patrolling every street corner and snoozing on any empty café table. And the unreal colours and contrast only help to add a further exotic edge to shots of street life.

The Lomo LC-Wide’s maximum aperture of 4.5 doesn’t give it quite the low-light abilities of the original Lomo, which can shoot at f2.8, but it’s still useful in the darker interiors of places such as the Spice Bazaar, home to stall after stall bursting with spices, herbs, sweets and other treats. The LC-Wide’s lens helps crowd the frame with all these exotic wares, while the grain and saturated tones from the xpro film help add to the unreal quality. Shooting cross-processed indoors is fine as long as there’s a strong enough light source to add contrast to the scene. The blurred shots from slow-speed exposures in the shadowed parts of the markets help evoke the city’s crowded clamour.

I’m already looking forward to my next visit to the city – and this time I’m going to shoot a lot more xpro.

Check out the pics below and the others you can see on my Flickr set.

Rich and dark colours from a city that is certainly a photographer’s mecca – the spice bazaar shot is delicious. A very good piece for travellers and enthusiasts alike.

Thank ye sir – it really is a brilliant city to photograph.. so much life on the streets. I could go back every three months.

These are great shots from a great city (one day I must visit, too). I’ve tried xpro a few times with the Agfa Precisa CT, unfortunately I never got good results. I’ve exposed it at ISO 200 (per recommendations from the web) so maybe that was the problem?

Hey Urbanhafner… the trick is to find the right film to cross-process… the Agfa Precisa you can buy in shops now is rebadged Fuji Provia, an that tends to go a very nasty green. The best thing to do is cross-process the original stuff (Agfa, not Agfaphoto) or Kodak Elite Chrome instead. I’m sure you’ll be impressed.

So I wasn’t doing it wrong. That’s a relief 🙂 I’ll give the Agfa stuff (still produced as Agfa Aviphot Chrome 200 I think) a try some day.

Make sure it’s the original Precisa – the Agfa 200 stuff (also the Lomo and Rollei stuff) goes greeny yellow aswell. Ebay is the best place – I’ve managed to get about 75 rolls over the last few years – patience is key.