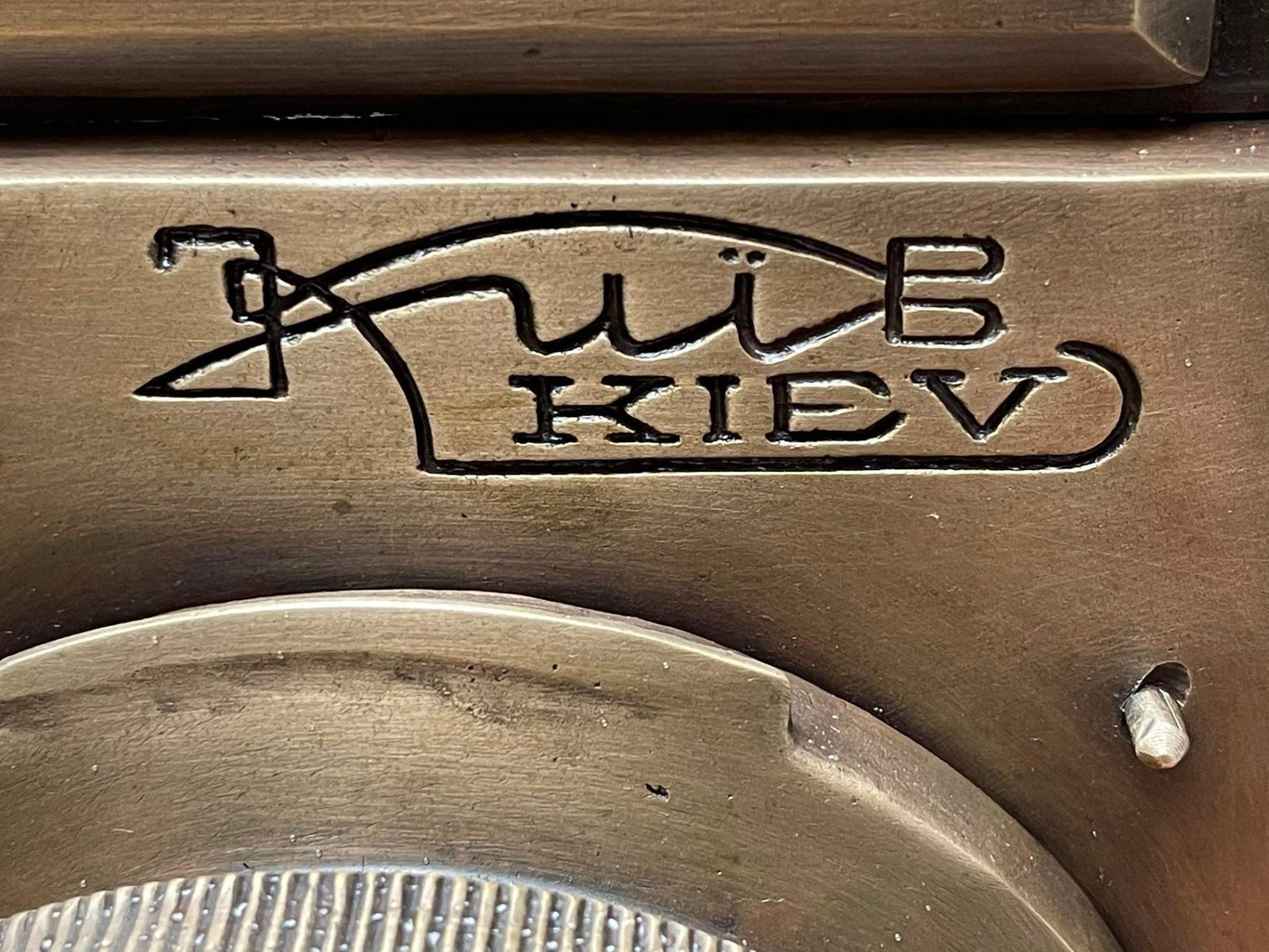 This piece by enthusiast Ivan Zotikov reports on the plaque unveiled at the site of the Kiev Arsenal factory in the Ukrainian capital Kyiv in August to mark World Photography Day. This article uses the Ukrainian term “Kyiv” for the capital, and “Kiev” for the cameras produced by the Arsenal plant.

My name is Ivan Zotikov and I am engaged in the history of the Kyiv Arsenal plant and the Kharkiv machine-building plant FED. I made a film dedicated to the activities of the plant on its anniversary date, a kind of a symbolic date, so to speak, marking Arsenal’s 250th birthday.

My next story was the publication of a book of memoirs based on technical documentation of general manager Alexander Trachun. At my request, he wrote the history of building cameras on the experimental site and in the Workshop Number 10 for almost half a century, the processes in which he took part and was a direct participant of. After our research in the archives of various technical institutions and departments, the archives of the ministry and technical libraries, we found a date: 1 or 2 May 1947. It was during those days that the first batch of five prototypes of the Kiev II camera was assembled.

2022 marked 75 years since the start of this camera’s official assembly. The plant has become a part of the optical-mechanical complex at the beginning of 1945 and they had tried to assemble the unfinished FED cameras in a trial period between May 1945 and April 1946, immediately after the Second World War. That was when it was decided to transfer lenses produced by Carl Zeiss and Contax cameras to Kyiv from the city of Jena. (Production was transferred as part of the reparation invoices issued by the Soviet Union to the German government immediately after the war.)

This date of 75 years became the impetus for me, as the author of the idea, to implement a “commemoration project”. This monument is a tribute to the memory of all those people who for more than 50 years created complex optics and cameras in Workshop Number 10. (Around 1,800 to 2,500 people worked there at different points in time.)

Regarding the production of the monument itself: I started this project back in September 2021 with a search for people who could help create it. My first attempt to implement such a large-scale project turned out to be difficult, then the war began.

Yet I still did not abandon my quest. 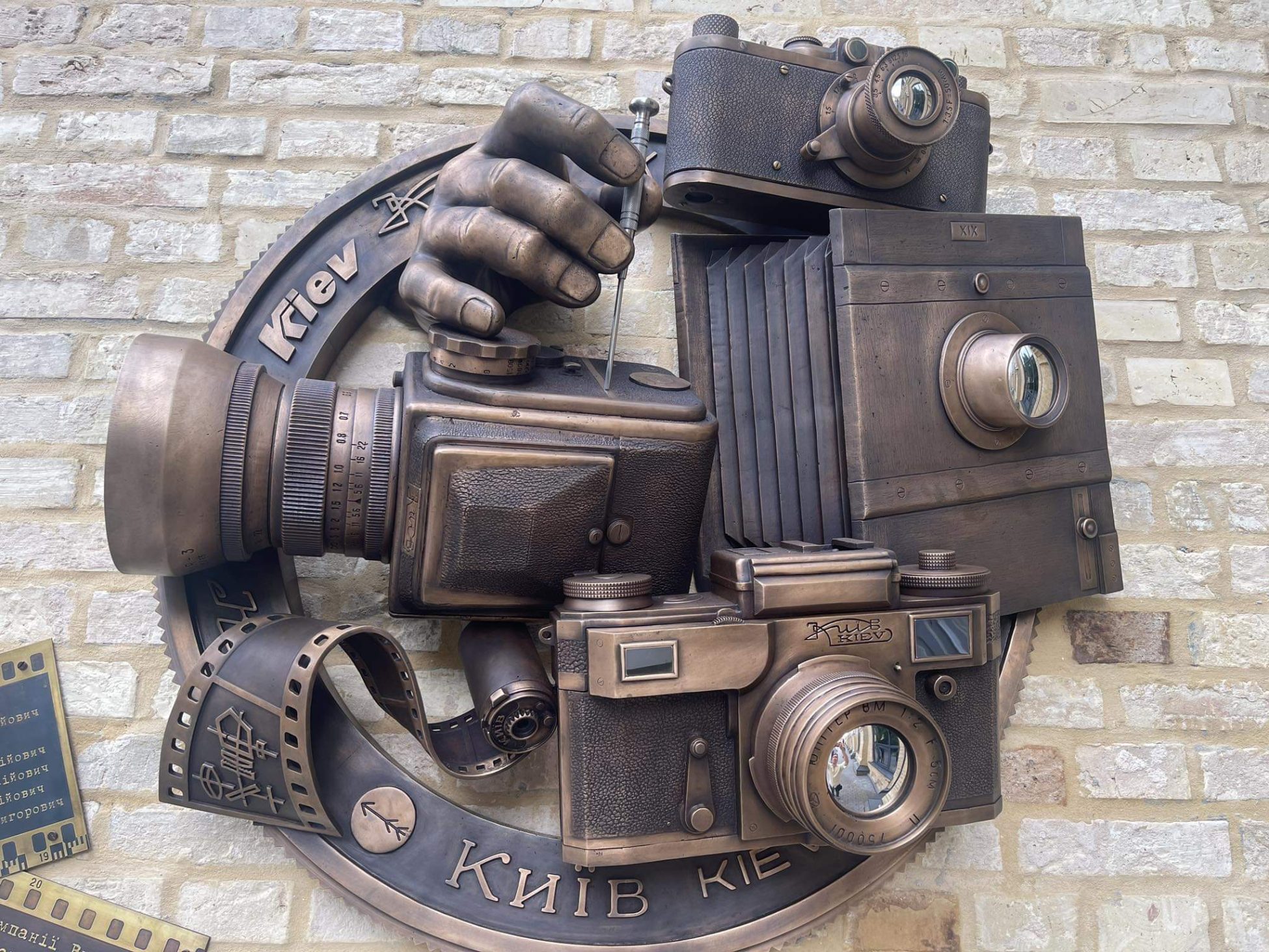 I turned to the professional team of a classic jewellery house Lobortas who already had experience in creating monuments in the city of Kyiv. I would like to extend special thanks to Igor Lobortas, and to also thank Aleksei Baranov, Anton Sorokin, Anton Lapach, who immediately got in the know and the date was set for 19 August 2022. From the start of the idea and all the way to implementation, the entire process took 4.5 months, which is very fast for such a large-scale task.

There are four cameras in the composition; the first is a large wooden camera of the FKD-type; it is a likeness to an image of a classic wooden camera, dedicated to a memory of those photographers who worked in Kyiv in the 19th and early 20th Century, when all cameras in the Russian Empire were foreign-made. Then there is a FED-Arsenal camera that was produced in very small prototype batches. The documents for this design were found in the state archives by a team of archivists after laying there for 70 years.

The third object presented in the composition is the Kiev-4. It was decided to take this fourth model of the Kiev rangefinder which appeared in 1957 based on earlier cameras already produced at the plant. The camera is the classic version with Ukrainian engraving, produced from 1957 to 1959.

The fourth is the Salyut camera, which first appeared in 1957 as an experimental batch (the version pictured on the monument is from 1958 from a small batch that had a Ukrainian spelling of word “Kiev”). Later it went through a major evolution and was exported to different countries in various modifications under the names Zenith-80, as well as Kiev-80, Revue 6×6, Soyuz and Soyuz 1000 and other export brands. 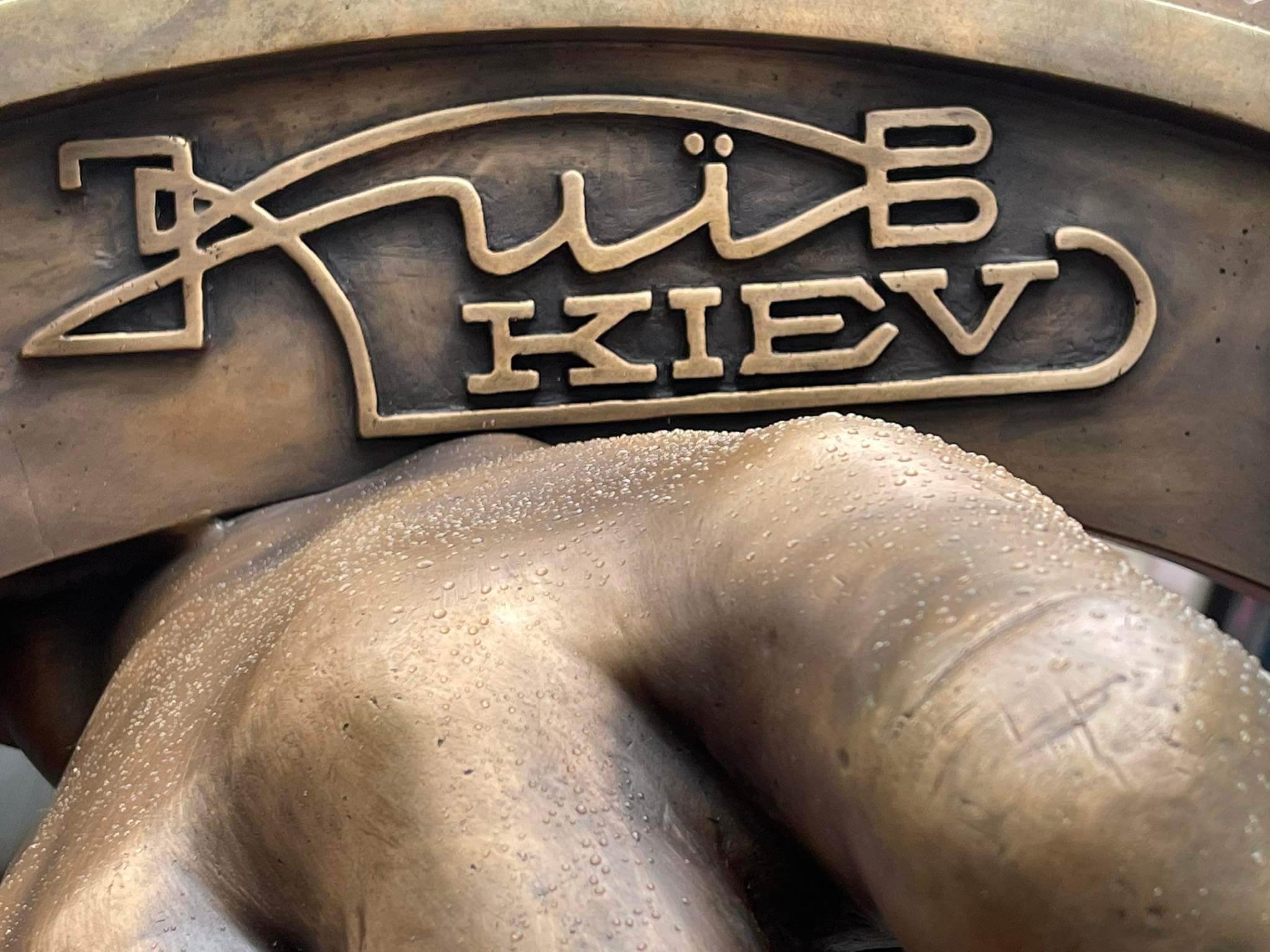 I think it is important to mention that from the 1960s to the mid-1980s, the products of the Kyiv plant were known around the world and it was a worthy competitor for other medium format and 35mm cameras.

Finally, we have the hand of a master with a screwdriver in the composition. This is to remember all those people who worked on the mechanics. The photographic film reel is present to underline the fact that all these designs are from the era of film.

Taking into account all the tragic events which are happening today, people who came to the opening of the monument reacted extremely positively. Due to the fact that city transportation runs intermittently, not everyone was able to get to the opening. The descendants of the people who once worked at the plant were invited, they reacted very positively and were amazed that cultural events were taking place in such a difficult time.

To our great regret, practically nothing was left of the plant’s capacity, in particular, nothing was left of the camera production lines at all. Today, it has been partially turned into a cultural and entertainment space for Kyiv residents. There are restaurants and a co-working complex which is very modern, and provides a large range of services for the private business industry.

In modern Ukraine, there are a lot of people, especially among young people, who still shoot on film and shoot with old cameras. Among them there is a fairly large percentage of people who are interested in the history of what was produced in our city of Kyiv. In general, photographic film quite powerfully occupies the interest of people, but the big problem is that there is no museum in Kyiv that can tell the history of these mechanical and optical masterpieces that were created at the Arsenal plant, and tell the stories of the people who made them.

It would be awesome if a coin or small version of this memorial could be made to sell to folks like us. Maybe to support a cause for Ukraine?

Thanks for this fascinating article. As a Kiev (sic) rangefinder owner it’s an interesting read, and it’s wonderful to hear this at this particular point in time from Kyiv directly. It would be great to see a museum there to recognise the contribution to photography.

The idea of a coin- medallion is a great idea.
I was surprised that I have never seen a pin from
the Soviet period on photography or cameras.
And this is 25 years of going to flea markets and shops
in Central Asia.
I personally own (I have lost count) approximately 25 Kiev cameras.
35mm and medium format.

A pin is a great idea. I would certainly buy a few.