This is the second of Kosmo Foto’s round-ups of the cameras hitting the shops in recent weeks. I’ve had less time to test cameras the last few weeks, partly because of a week’s holiday in India and partly due to a bout of Covid (thankfully not serious, but enough to keep me confined to home for a week).

That said, there are a few new additions if you’re looking for a cheap and cheerful compact camera, but the better news is that I have nearly 100 cameras waiting to be tested. Expect to see a lot more cameras coming into the shop over the next few months.

The new additions are: 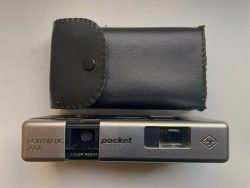 One of the first 110 cameras released by Agfa in the early 1970s after the introduction of 110 film by Kodak in 1972.This is a fully manual model with shutter settings for cloudy conditions (1/50) and sunny weather (1/100). This camera has very slight cosmetic damage but appears to be working fine. Comes with original case. Not film tested. 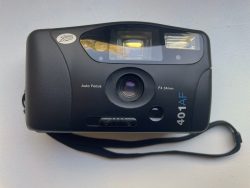 Robust compact with a bright and brilliant viewfinder. Probably made by Ricoh in the late 1980s or early 1990s, this camera features a 34/4 wide-angle lens with bags of contrast and decent coatings to prevent flare. The camera’s DX-coded, too. This compact has been fully tested with a roll of film and everything works – including the flash. Comes with the original handstrap. 90-day warranty. 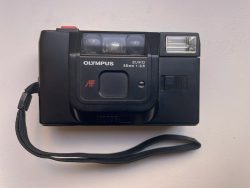 One of the first Olympus autofocus compacts from the 1980s, this two-stage autofocus camera is a real delight. It has very boxy 80s styling and some manual touches – manual wind-on and rewind – that will please fans of the LOMO LC-A. Like virtually every Olympus film camera ever made, the lens is fantastic. This camera has been film-tested and everything works as it should, including the flash. 90-day warranty. 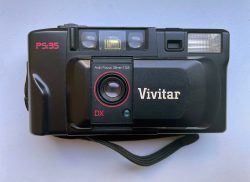 1980s-era chunky compact from the American distributor, produced by an unknown Asian manufacturer. A little-known model these days, I was impressed with the quality of its 35/3.8 lens. This camera is DX coded and has an integral flash. Everything is working as it should be, including the flash. Camera comes complete with original handstrap. It’s film-tested and comes with a 90-day warranty.

The other cameras in the Kosmo Foto Shop are below. Unless stated in the listing, these have all been film-tested and come with a 90-day warranty.