A new pinhole camera which allows you to shoot onto 4×5 photographic paper and develop the print inside the camera has been funded on Kickstarter in less than four hours.

The new Pinsta Instant Camera Micro Darkroom and Negative Enlarger has been created by British photographer and inventor Oliver New. The camera can take pictures and be used to develop the resulting images.

“Pinsta is a camera which can shoot directly onto positive 4×5 inch photographic paper. It develops internally, and can be used on the go, wherever you are and whenever you like for creating and sharing real analogue prints!” says New on the camera’s Kickstarter page.

The camera is also a mini enlarger, New says. “Simply load your negatives into the internal enlargement slide and you can enlarge them onto 4×5 inch paper. You can even create prints with fun and creative frames and overlays using Pinsta’s ingenious internal slide system.” 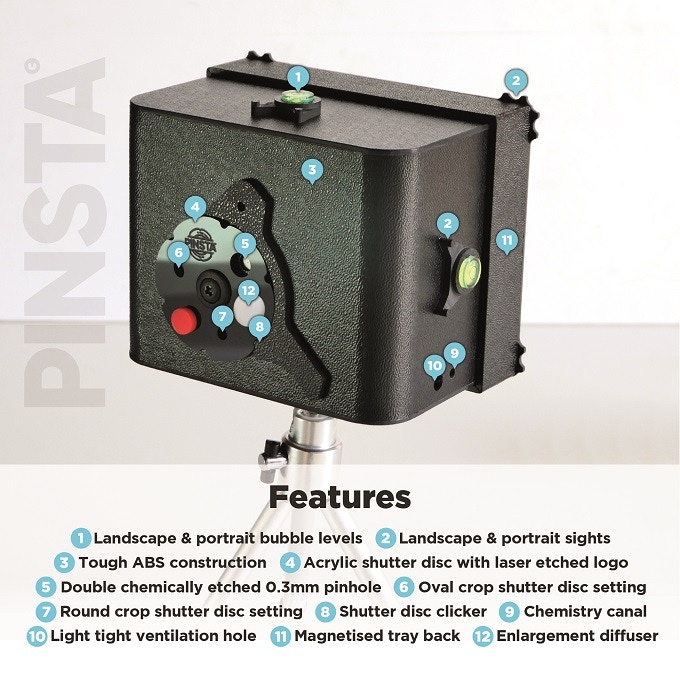 He says the camera can be used to produce prints at home or out and about.

The camera is loaded with photographic paper in a dark bag and typically captures an exposure in around two minutes in sunny weather, New says. The prints are then developed by attaching syringes with developing liquid and inserting and then extracting the developer. “When you are developing the camera body is your darkroom and your camera back becomes your developing tray,” the Kickstarter page says.

“Developing of black and white paper is a simple process so you can’t really get it wrong. Develop for one minute, fix for 30 seconds to four minutes (depending on the paper) and add water to wash before revealing your amazing photographic print. A set of syringes will develop around 4-5 shots depending on which photographic paper you are using. The syringes are then replenished with your own chemistry once it is exhausted.”

(Examples of images shot or enlarged with the camera)

The Kickstarter campaign runs until 18 November.

Pinsta says: “We have lots of plans for Pinsta and our hope is that it becomes a mainstay in the photography world. We see Pinsta not only as great fun for the hobbyist and an excellent tool for artistic creators but also as a brilliant learning tool. Our hope is that Pinsta cameras will be used all over the world in education and in recreational photography workshops alike.”

Add-on products in the future could include film backs for 35mm or 120 film, a wide0-angle back, and an associated phone app to work out exposure.

You can see more demonstrations of the Pinsta camera on the Pinsta YouTube channel.

I love the fact that it can be used as a enlarger as well – it reminds of some the early daylight enlargers I’ve heard about! Even though it the enlargements are 4 x5, it would still be good for making small prints.