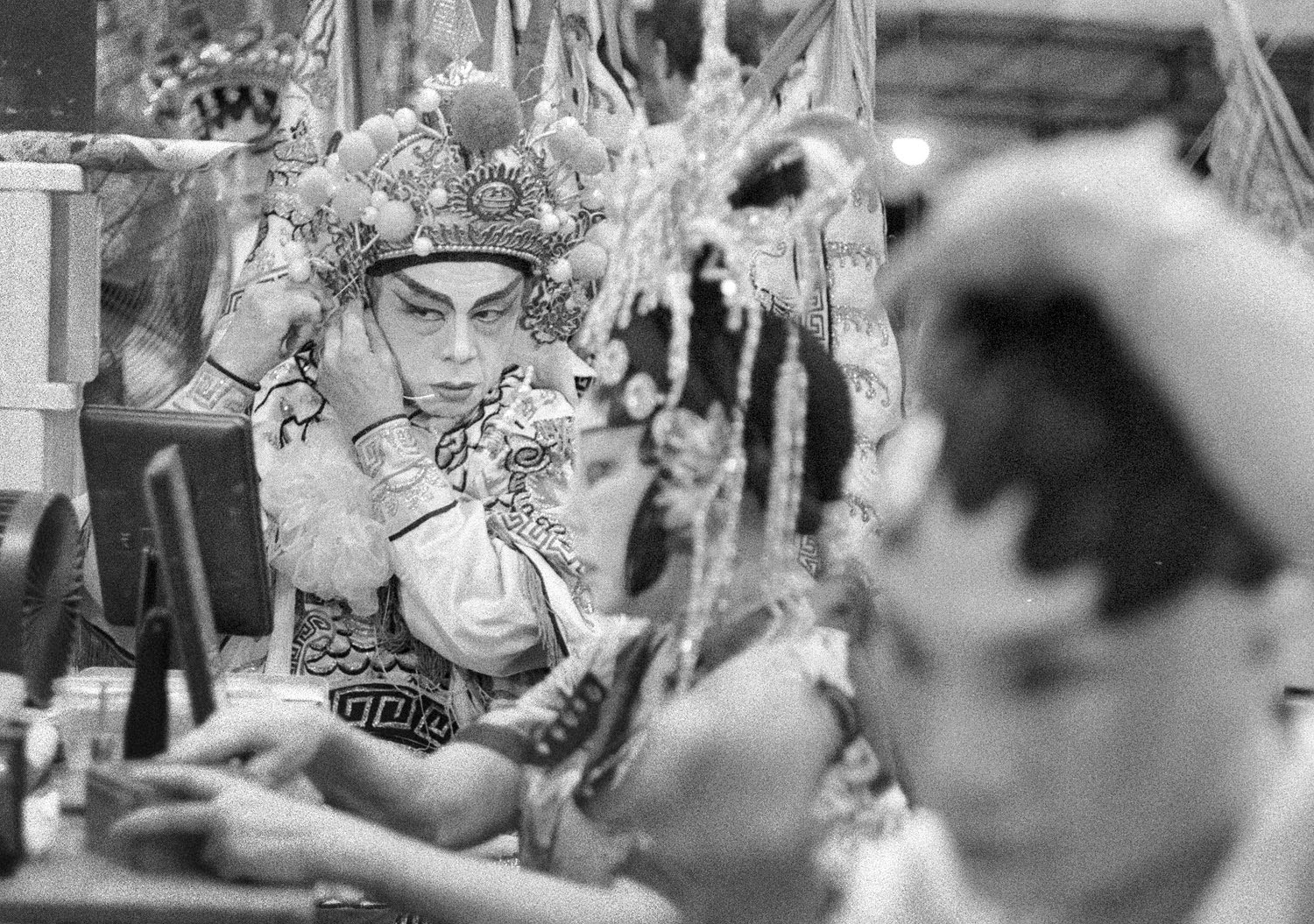 The ear-splitting crash of cymbals rouses the night as I enter the cavernous confines of the Sheng Hong Taoist Temple, on Singapore’s eastern side. The reverberating sound, though, isn’t meant for me – it’s a signal that announces the start of a tradition that hasn’t been seen in a while. After a year-long ban on mass gatherings imposed by the government against Covid-19, the country’s wayang, or Chinese street opera performers, are going back onstage.

I’m covering a story for Afar.com, about how the art of Chinese opera has lasted for over 2,000 years, only to be sidelined in the age of TV and the internet. Already struggling to find relevance in this modern era, these classical artists have also had to contend with the economic fallout brought about by the pandemic. Needless to say, their return has excited heritage enthusiasts – myself included – and I am eager to document this special occasion.

There’s also another reason why I’m raring to shoot. Kosmo Foto founder Stephen Dowling sent me a roll of the new Agent Shadow film to test. My camera kit is twice as heavy tonight, with my Nikon FG-20 film SLR, plus an Arsat 50mm f2 and Vivitar 19mm f3.8 lenses complementing my Fuji X-Pro2 digital set-up.

Pledge on the Agent Shadow Kickstarter

With social distancing impossible inside the cramped backstage – and with surgical masks unusable over thick stage make-up – I am only allowed a window of 30 minutes to shoot. There will be no interviews made under the circumstances, so I am free to concentrate on my shooting. 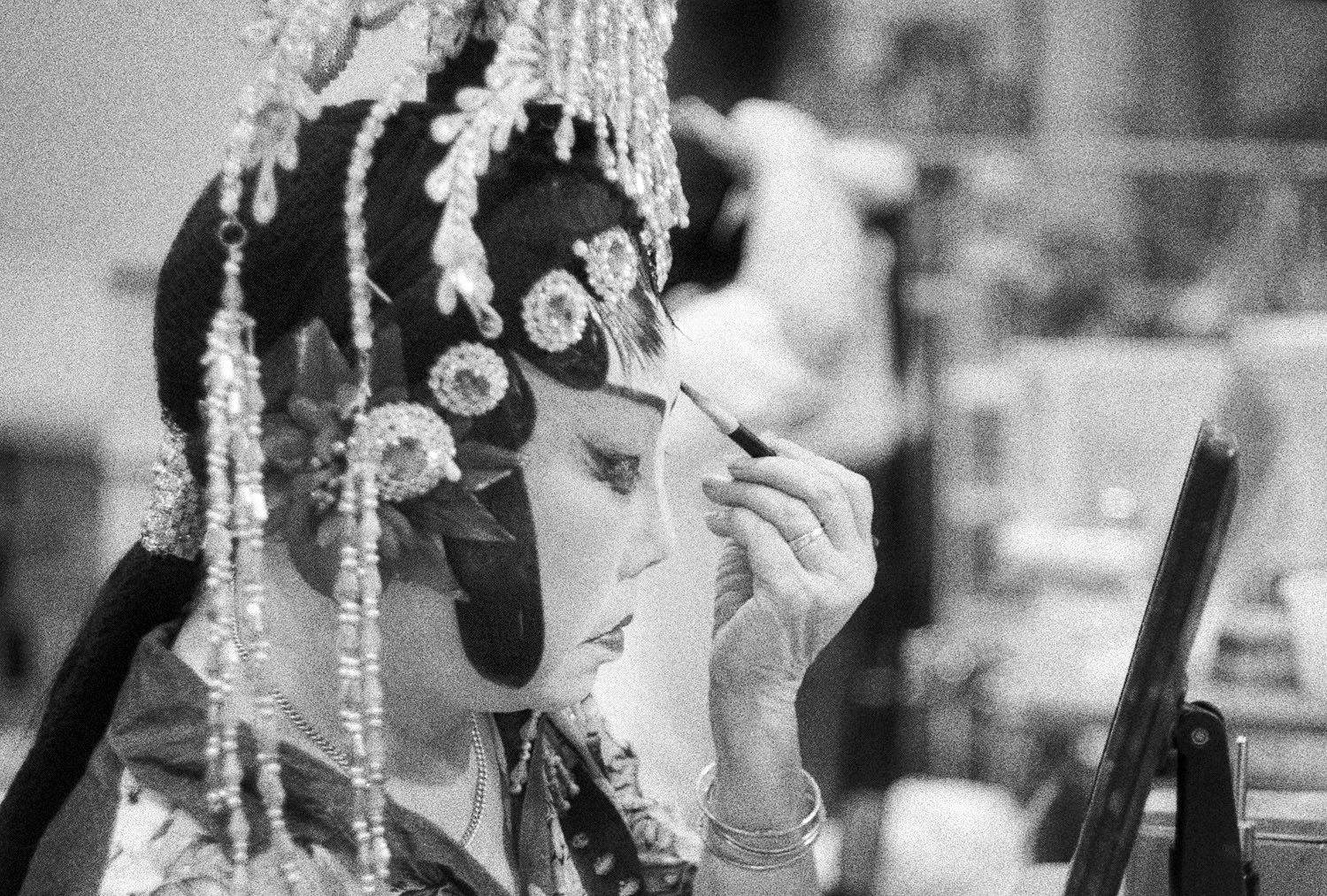 The fact that I’ve never used this emulsion gives me a delicious feeling of uncertainty over the outcome of my images. Agent Shadow film is made for low-light situations, as indicated by its native speed of ISO 400. However, I decide to expose at ISO 1600 to adapt to the dim lighting around me. Also, I thought to bracket a stop for every shot on this unfamiliar film, but quickly realise that I would burn through the whole roll in no time. So, as the trigger-happy would say – shoot at will and fire for effect.

Backstage is a flurry of activity when I step in. The actors are in the final stages of make-up and costume. Some are hurrying to make their cues, others are passing the time by quietly rehearsing lines. Thankfully they ignore me as I discreetly work my angles. With help from a little hotshoe meter, I am able to get borderline usable shutter speeds of 1/15 – 1/60 at wide open apertures. At one point I snap a quick shot of a wayang looking rather out-of-character with a cigarette between her lips. The old lady (these thespians are all veterans) flashes me a sweet-but-naughty smile, and resumes her five-minute break. 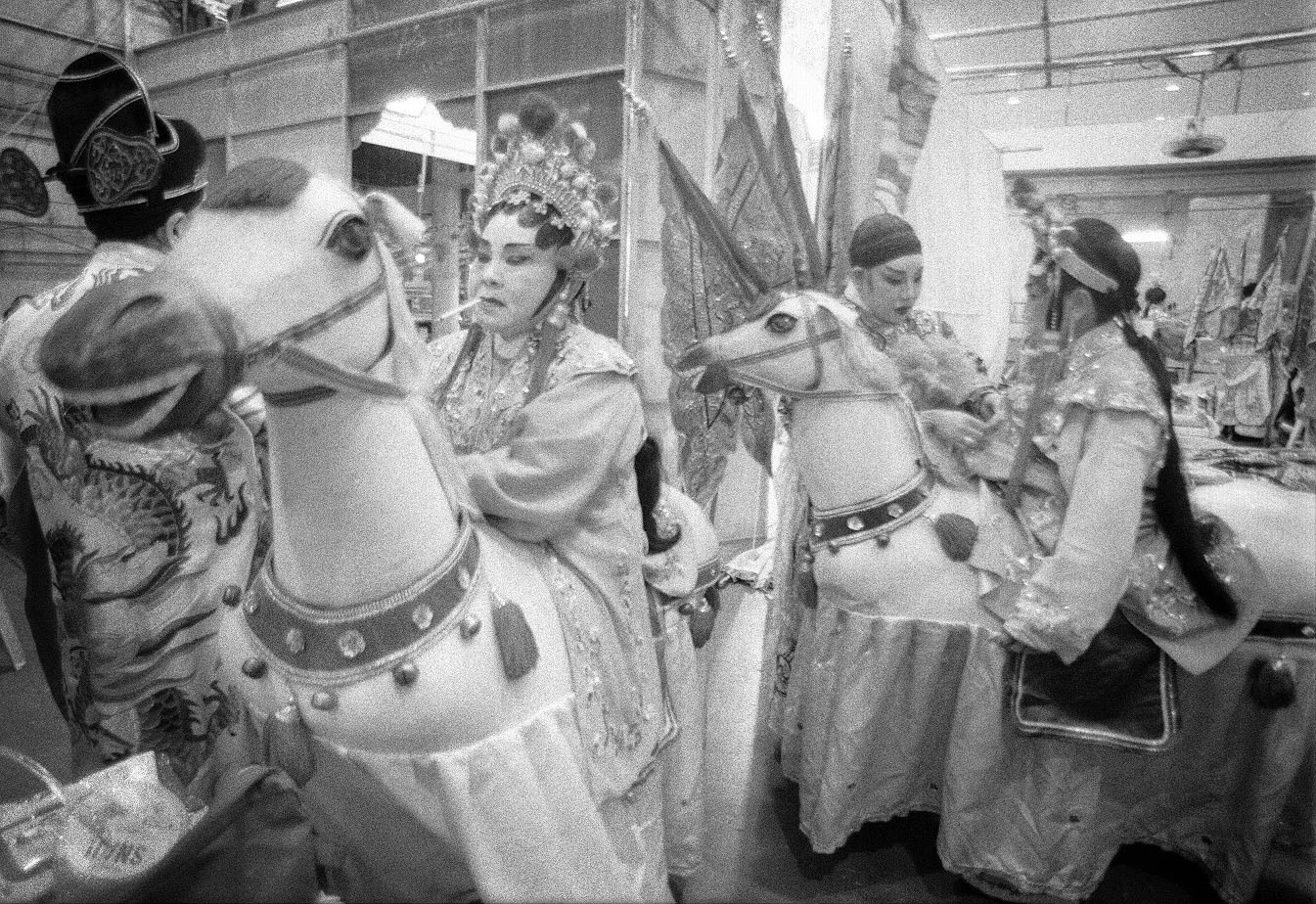 When my alotted half-hour limit arrives, the roll of Agent Shadow is all used up. I round off my coverage with the digital camera and call it a day. Back in the darkroom, I push-process using the recommended developing times (22 minutes at 20C using 1:1 D76, plus Netflix), and am wowed by the result. 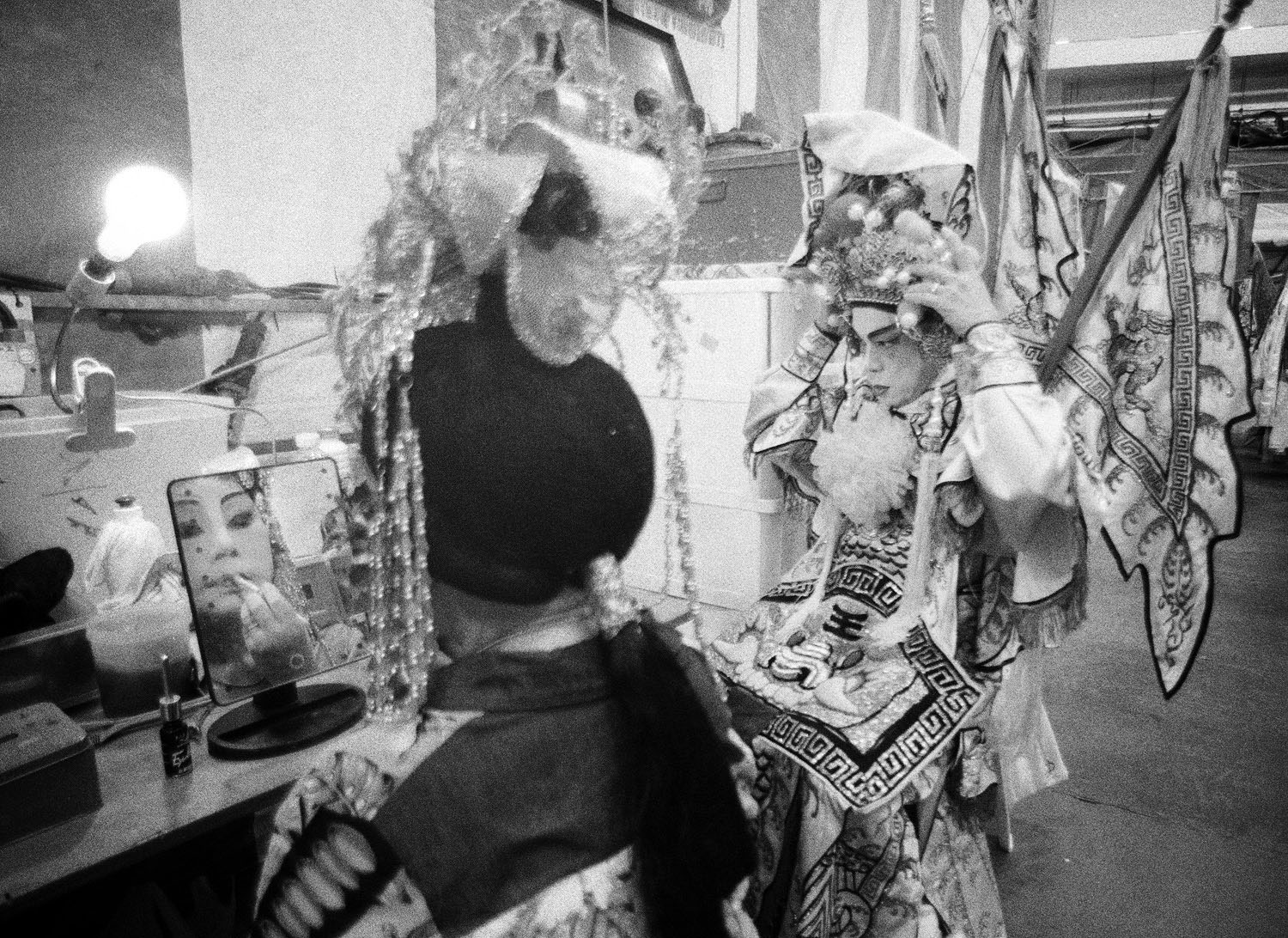 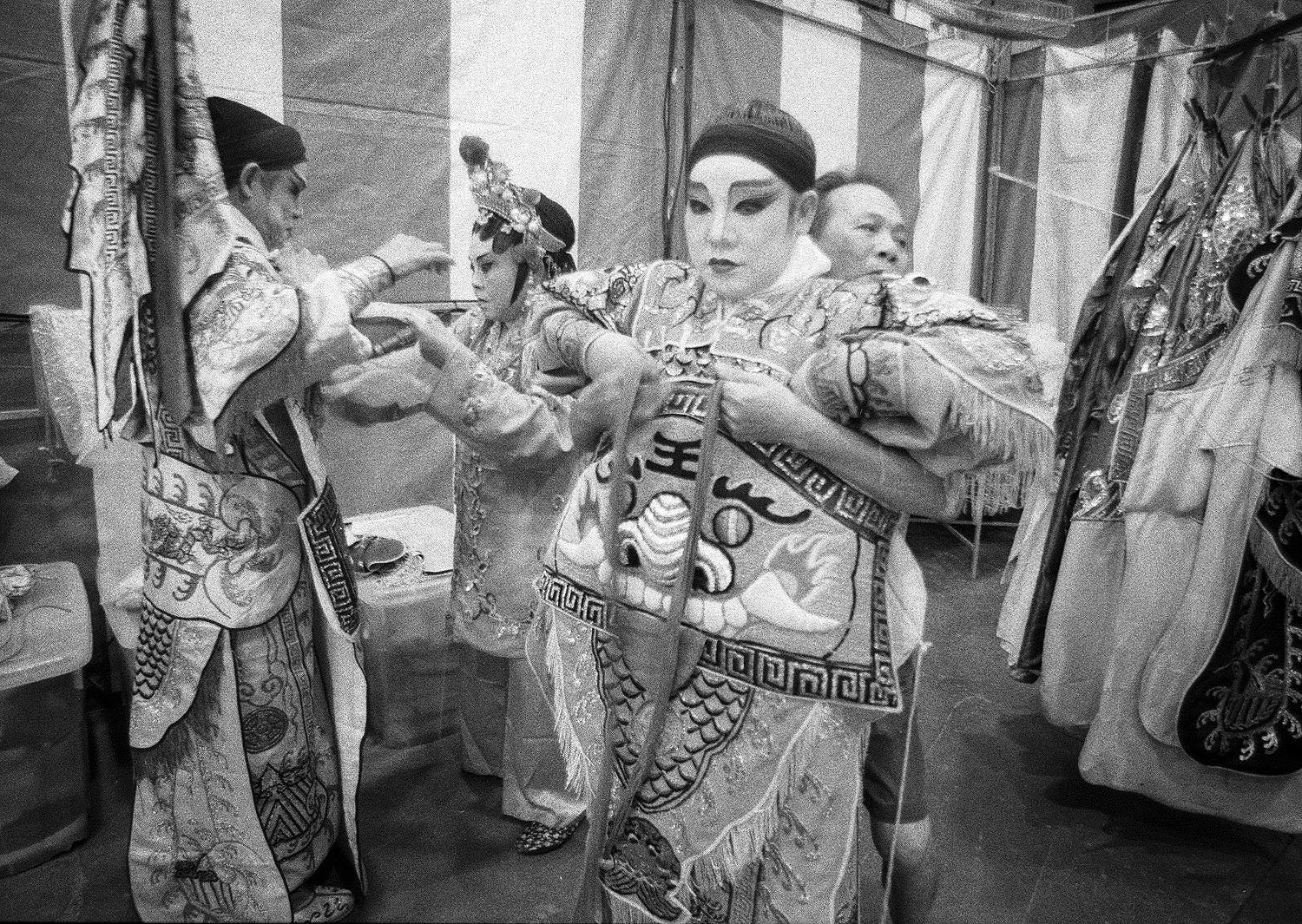 The film possesses lovely grain, with medium-range contrast that looks great on my subject. On some other emulsion this might look like it was developed at box speed. Furthermore, it looks good enough from a straight scan on my Primefilm 7200 – no doubt the correct exposure calculations are a factor here, but this film would be useful in situations when you have little time to tweak the digital image, and have lots of it to turn over.

I’ve only used Agent Shadow this one time, but am confident that it’s up to the task of realising the vision of discerning photographers everywhere. This film can’t come to the market soon enough – and when it does, I’m stocking it in my freezer!