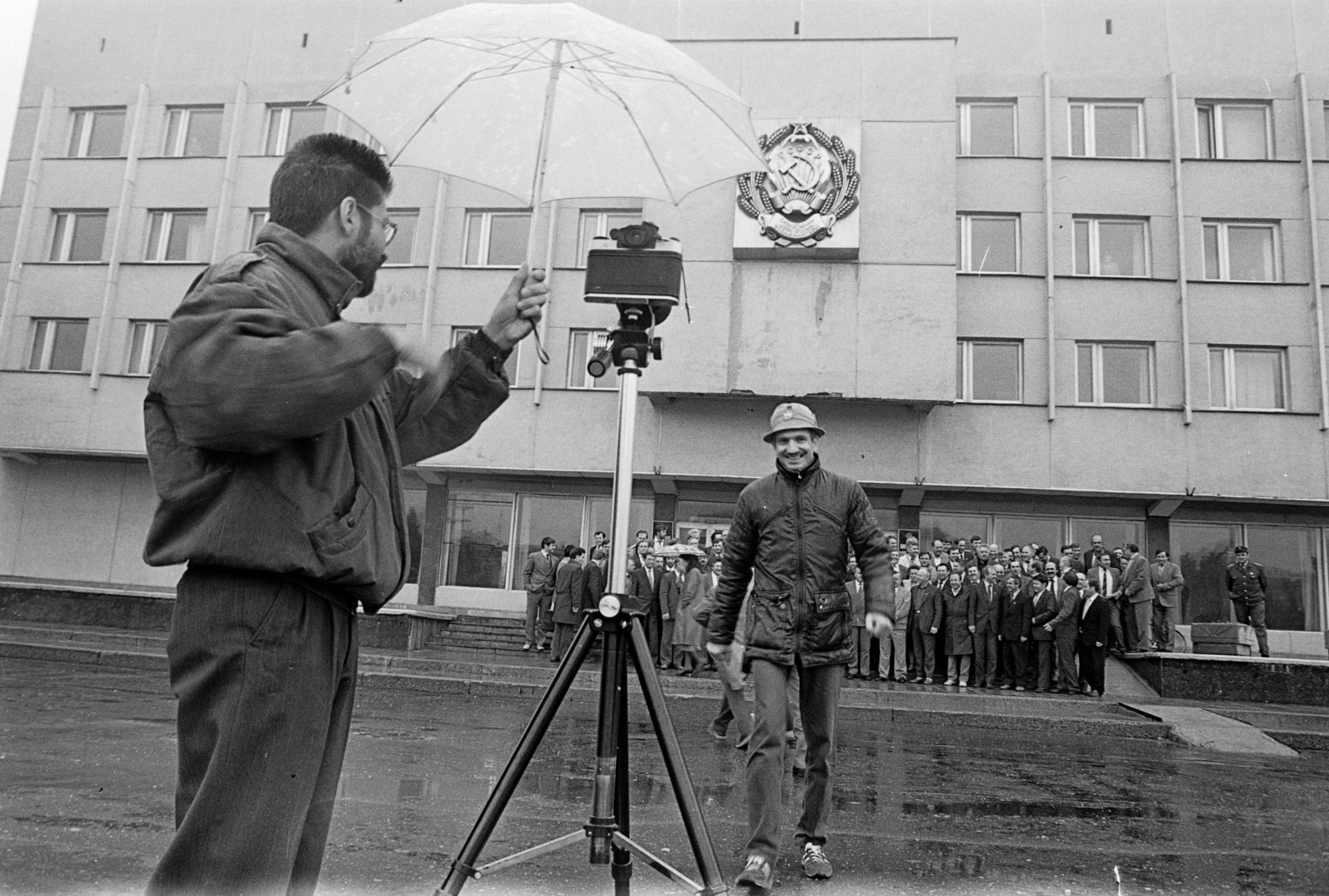 I think the sharpest difference in Soviet photography compared to any other was due to complete absence of film processing and printing services.

It is true, there were some centres in capital cities such as Moscow and Leningrad, making pictures of poor quality in a month or even longer. But other cities, even regional centers, had no services for amateur photographers and home moviemakers. Also, USSR did not produce any instant films, such as Polaroid.

The first Kodak Express minilabs appeared after 1991 and until 2000 were regarded as a luxury service. This meant all Soviet amateurs had to develop film and print pictures by themselves. Prepared developers and fixers in tablets traded alongside cameras, enlargers, safe lights, developing tanks and trays. Soviet amateurs usually equipped their bathrooms for picture printing, when all family members finished taking a shower and went to bed.

Read more: Amateur Photography in the USSR: Part One

Such a darkroom was periodically made by my father, and was my first photographic experience.

Better conditions for photographic processing were at the state institutions for people’s creativity, such as Houses of Culture or Palaces for Soviet scouts, translated as “pioneers”. It’s amazing: the Soviet state intensively developed photographic sections of such cultural centers, at least one in every city. Culture Houses were owned by major plants and were well supplied by them. There were no barriers or even a fee necessary to enter this section, and almost half of the famous Soviet photographers and photojournalists started their careers in Pioneer Palaces.

Entering such a photographic section opened up an opportunity to develop and print pictures in almost professional laboratory, sometimes equipped with pro enlargers and even pro print-drying drum machine “АПСО”. Those wished to develop further as a photographer, soon became almost at the level of a pro in the Soviet Union. They became connected to a photographic ‘sect’ with almost endless resource of domestic cameras, chemicals and particularly film and paper stock.

The most-equipped labs were at large facilities, especially ‘post boxes’, which made defensive military products. Those familiar with the Soviet economy, know: such ‘boxes’ was invisible, but the largest part of the industry iceberg. Photographers employed there could order any equipment, cameras and lenses, except foreign models. This way, the most expensive Soviet cameras, fell into private use, in fact. Imagine: a Kiev-88 TTL at the time cost 900 roubles, almost a year’s wage for the average citizen, plus a set of the same expensive lenses, perfectly legally becomes yours! This doesn’t even include Zenits, which were ordered by the facility every two or three months. We never bought cameras as I said in the previous article, but we only had domestic gear to work with.

Few of us owned Japanese cameras, and you could only buy these with your own money. For example, a Canon F-1 on the black market was about 5,000 roubles in the late 1980s, when official exchange rate was 0,76 roubles for one dollar. The price was exactly equal to the cost of a new Soviet car. Foreign gear trade was strictly forbidden and traders inflated the price because of the risk.

None of the Soviet photographers used conventional Svema or Tasma b&w films ‘Foto’ available in the shops. Loading such film into camera was a sign of an amateur, because of their very poor quality. ‘Foto’ film was usable only in mid-format cameras, thanks to lower enlarging necessity.

Those in the know loaded their Zenits instead with 35mm motion picture film stock, cut from bulk 1,000ft reel. KN-2 for outdoor shooting, or KN-3 and KN-4s for indoor coverage. Some used A-2 high speed film stock. Those, who were close to good supply of powerful patronage facility, used 35mm perforated aerial panchromatic films. Most common was ‘Isopanchrom type-17’, but there were many additional types, for example Type-22, Type-42 etc.

Aerial films were not intended for usual photography, they must be used without printing paper positives, for decryption of captured terrain directly from the negative. That’s why such film types usually have a strong contrast and high speed. Correctly selected development solution allows you to get a normal contrast with lower speed.

Type-17 was a real icon for Soviet photographers, unfamiliar with Kodak or Ilford films. Once we shot it, none of us wanted to see any other film except Type-17. The grain was extremely small, but exposure latitude almost endless. I can affirm that pictures taken on 35mm Type-17 has equal or even better quality as pictures shot on 120 Svema Foto-65.

In fairness, I must say, when we grabbed Kodak films at last, we discovered: Type-17’s quality was inferior. I never seen any density unevenness in Kodak or Ilford film, a common problem for each Soviet film type near the frame edge and perforation. All Soviet films, including the almost military-grade Type-17, had poor quality. But there was another important thing: there was always a lot of film around. If you once connected to ‘sect’, you have a lot of film! Kilometres or tens of kilometres as much as you wish. I can tell the same about b&w photographic paper and chemicals.

It was one of features of the Soviet planned economy. Once the government decided that some goods must be produced to satisfy needs, industry started to produce it in gargantuan quantities. Even, if the amount produced was more than the whole USSR could use, the factories continued output. This generated such purely Soviet conception, like thriftless, when unnecessary goods end up in the junk or just plundered.

When I started my career at a photographic section, I was impressed by one chest at the darkroom. This steel chest – 2ft deep and 5ft wide –was full of partially fogged paper. I’m already told there were no barriers and entry fees for everybody, who wants to enter the section. Both schoolchildren and grown-ups could use this darkroom to print their pictures on the community paper. Many of them visited just two or three times. But they managed to make trouble even in this short time.

For instance, once a large 100-sheet pack of paper could be fogged easy by such forgetful ‘photographer’ turned on white lighting suddenly. A part of pack may survive in such case, and went to chest for irresponsible prints. I never seen this chest empty, and nobody was not punished for paper damage, because it was free. So, we used mediocre films and papers, but we could shoot and print endless without worrying.

Apparently, those who joined these photo communities or were later employed as a pro, had more possibilities for making good quality pictures than those developing in their bathrooms. The Soviet conception of a “pro photographer” is quite different compared to the rest the world. A photographic occupation was rated as a technical activity, rather than creative. A photo section could be located next door to aircraft model hobby group in a Soviet Pioneer Palace building. So, those who learned how to make sharp and contrasty b&w prints were rated as a potential pro.

Employed to plant lab or to municipal portrait studio, they started to earn money. Most competitive market for such “pros” was school graduates photography. Everything, I wrote here, is about most common b&w photography, available and cheap both for pro and for amateurs. Really expensive and more complex colour photography was rated as a completely different profession in the USSR: «Фотограф-цветник» or Colour Photographer. Remember there were no automatic film processors and printers for common customers, except at state media agencies, like TASS and APN, not available to most mere mortals.

More important was the inferiority of Soviet colour films compared to foreign varieties. Our films were just slightly improved Agfa, taken away from Germany as reparations after WWII. When Western colour films were in their fourth generation, Soviet films were still in their first. Kodak produced motion-picture 35mm color negative film stock directly for the USSR, punching a Soviet-standard perforation. The rest of the world had used Bell-Howell short perforation for negative film stock since 1936, while USSR and satellites perforated both their negative and positive stocks with the longer Kodak Standard long type.

The Soviet industry produced huge quantities of film stock for movie, as I said, but colour films had such poor quality, that any film producer dreamed to cut his own couple of kilometres from that million running meters of Kodak, supplied every year to the USSR. The possibility to make a movie using Kodak film stock was a sign of a producer’s success.

Talks about Soviet film quality weakness were quite open, and periodic media published articles about this problem every month. It was not a secret, and every photographer knew the difference between ‘hydrophobic’ western dye-couplers and outdated ‘hydrophilic’ domestic ones. Photographers suffered, fighting for color quality the same way, as cameramen. That’s why colour print price was two or three times higher compared the black and white ones.

News photographers almost didn’t use colour film, except a few of us, working at rare glossy magazines or major publishing houses. Those, who shot for “gloss”, used Kodak Ektachrome slide films, ordered by the state for propaganda. Even East-German Orwochrom slide was absolutely superior to the miserable Soviet reversal films, definitely unusable for professional quality offset print.

That photographers were a separate cast, living in a different world. In most cases, they used foreign medium-format cameras, such as Hasselblad, Mamiya or Pentax 6×7, bought by the Soviet government using hard currency. Their professional wages were quite different to ours. In the late 1990s, when colour negative films and minilabs became affordable, slide photographers still expensive. For 6×6 Kodak slide, the price was around $20 for domestic publishers, almost equal to the average month’s wages in ex-USSR countries.

The digital revolution was the only thing that made color photography an everyday thing here. It changed the Russian market hard, made most old pros unemployed, and allowed many new photographers to rise.