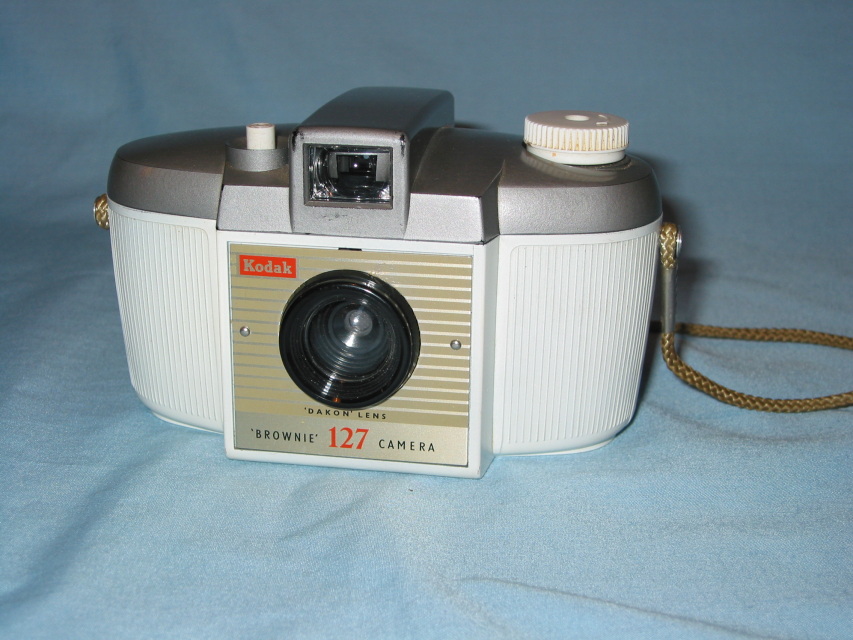 In the 1950s, Kodak’s English factory, in Harrow on the north-western outskirts of London, had the biggest manufacturing plant in the British Commonwealth.

More than 6,000 people worked at the site, which was so big that it even had its own sports grounds.

One of the cameras produced there was the Brownie 127, designed by the British Kodak team and first produced in 1952. It was cheap, stylish and simple to operate. It was perfect for those too poor to afford the much more expensive cameras from Germany, the US and Japan, this homegrown bakelite snapper became hugely popular with British holidaymakers wanting to document their bank holidays at the beach and weekends away.

The dark brown plastic Brownie 127 could take 4 x 6cm images on 127 film, a smaller roll film format that had first come put in 1912 and was popular with amateur photographers before the widespread adoption of 35mm. The Brownie 127 boasted only one shutter speed – 1/50th – and a single aperture setting. You didn’t even have to focus it.

The camera was so popular that anywhere between one and two million of them were made in the first two years of production alone. In 1959, Kodak tweaked the design, and built millions, millions more.

All of this second version were made in black. Well, almost all of them. One batch was different. Kodak built 5,000 of them in white plastic, with a silver top, for sale only in the Channel Islands.

Before the days of cheap package trips to the Spanish costas and Greek Islands, Britons did much of their holidaying a lot closer to home. The Channel Islands – the only part of British soil which had been under German occupation during World War II – are much closer to France than they are mainland Britain. This scattering of islands, each of them with their own laws and administrations, was home to little more than 100,000 inhabitants. But it was fast becoming a favoured haunt for Brits looking for a little more sun than at home but who didn’t fancy having to stumble their way through a foreign phrasebook.

The 5,000 white-and-silver Brownies were only available on the islands. A problem soon emerged, according to Chuck Baker’s Brownie Camera site. “No more were made because of how dirty looking the light body would become after handling.” No more “albino” Brownie 127s were made.

Bakelite cameras are a lot easier to break than metal ones, and as this batch was a mere drop in the ocean, the Channel Islands-only cameras are incredibly collectable. So much so that camera price guide bible McKeown says some people have faked ordinary Brownie 127s by repainting them.

An ordinary second model 127 should sell for between $10 and $20, according to Collectiblend; the white ones, they calculate, could fetch up to $600 if it’s in good condition. One in the UK was recently listed for £999.