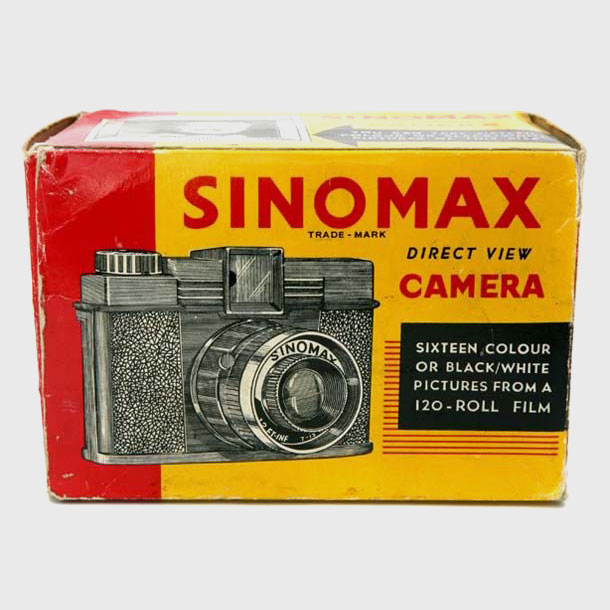 In the 1960s, a British importer called the Sino Trading Company discovered a cheap plastic camera on sale in Hong Kong. Bright and toy-like, it was the perfect novelty items to sell back in the UK.

The cameras was the Sinomax, one of a raft of clones of the Diana, which had been unveiled in Hong Kong in 1958. It was a simple medium format camera taking 120 film. It had a fixed plastic lens, two shutter speeds and three apertures – a chunky plastic “toy” camera with just a handful of metal parts.

Medium format might be a bit of a luxury today, but in the 1960s there were plenty of 120 cameras aimed at the cheaper end of the market. The Sinomax seemed just the thing for the UK market.

Sino Trading Company was run by Dennis Rattle, a former jazz pianist. One of the staff who worked at the company in the 1960s, Maud Ramadan, recounted the early days of the camera in a letter to American photographer Allan Detrich, who amassed the most comprehensive collection of Diana clones.

“Denis Rattle made periodic trips to Hong Kong where we had four main suppliers. I don’t know which of these supplied the camera. One day he took me up to the roof of the building where we had our office (the Corn Exchange in Liverpool city centre) and took some photographs of me with his very expensive Leica camera,” Ramadan wrote.

“He didn’t tell me why, but I was probably about 17or 18 (judging from the ‘blancmange’ hair style!) and he was the managing director so I didn’t ask. Then some months later the Sinomax camera arrived and there I was on the side of the box.”

Maud wasn’t the only one. On the other side of the box was a baby photo of Dennis Rattle’s young son Simon. Or as he is now, Sir Simon Rattle, the world-famous classical conductor.

“Simon was at that time about 8 or 9, I suppose. He often came into the
office with his dad on a Saturday morning, to have a play with the typewriters
and to chat to whoever was in that week,” Maud told Detrich. “We used to play ‘composers’ which was Simon’s made-up game of going through the alphabet and alternately having to find a composer with a name beginning with a particular letter. I don’t remember him ever being stuck, whereas I often had to make up a name so he wouldn’t win.”

Sir Simon, classical fans will be well aware, turned his music bug into a lifelong career. He was chief conductor of the Berlin Philharmonic between 200 and 2018 and is currently music director of the London Symphony Orchestra. But his first brush with fame, it turns out, was as the face of a humble toy camera.