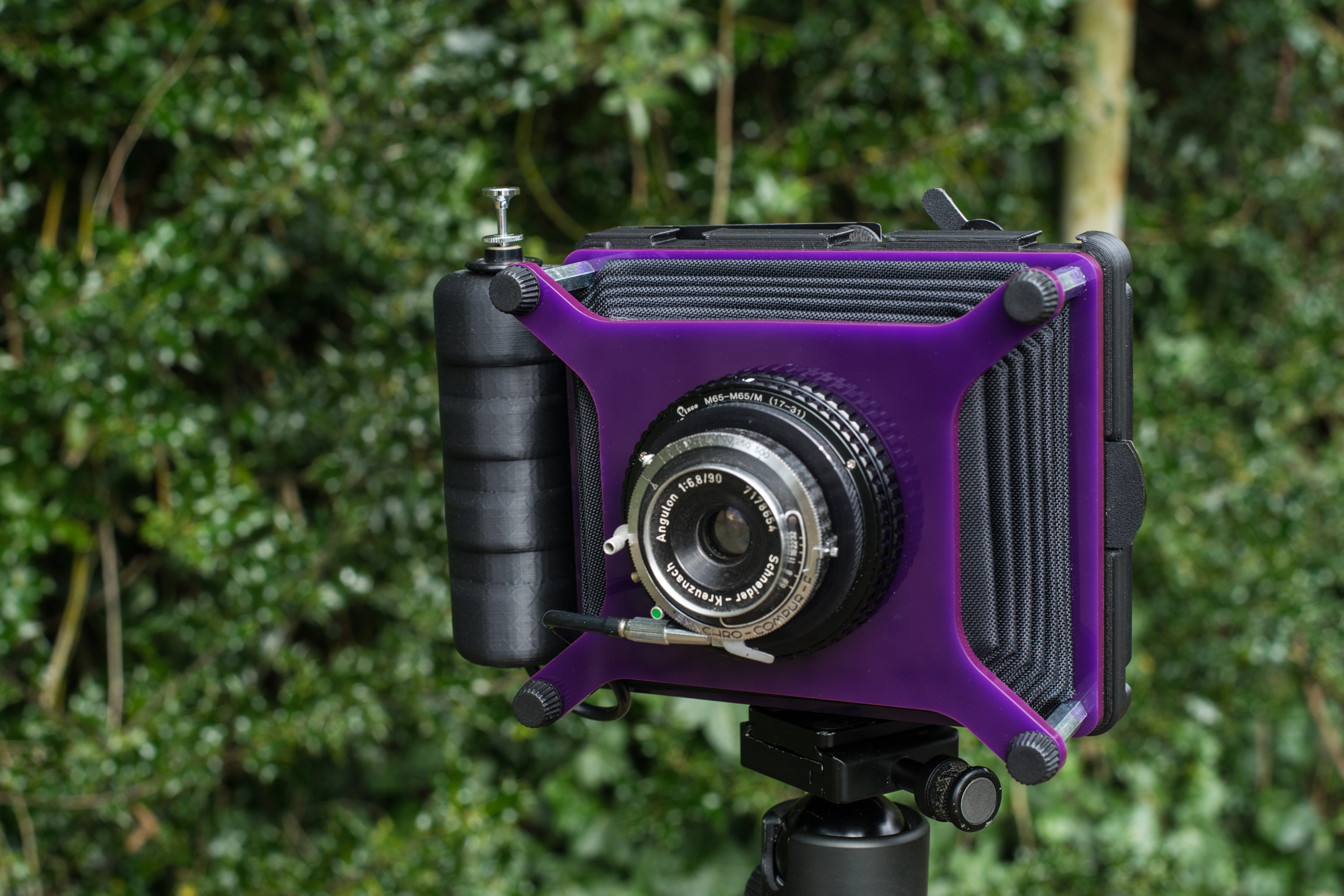 Chroma Camera’s Steve Lloyd appears to be one a one-man crusade to bring large format film photography back into the mainstream.

In 2018, Liverpool-based Lloyd launched his Advanced45 camera on Kickstarter – a camera he had built on evenings and weekends in his garage after a bet with another photographer.

The Kickstarter campaign was a huge success, raising nearly £45,000. Since then, he has brought out another model, the Carbon Adventurer, which is a lighter and more portable version of his original camera.

But that’s not all. Steve has also just launched a third camera – a much lighter and more portable 4×5 camera called the SnapShot.

“The SnapShot is different to the other two Chroma models (Advanced45 and Carbon Adventurer) in that it is designed to be primarily handheld, although it does have a tripod mount embedded in the bottom too,” Steve tells Kosmo Foto. “Without a lens, the SnapShot weighs less than 800g with its printed/acrylic construction but doesn’t compromise on quality with a metal helicoid for focusing and traditional pleated bellows. It also has the same multi-format back design as the other Chroma cameras, which means you can use a wide range of sheet film, glass plate, roll film and instant film with it.

“Unlike other handheld cameras available today, the inclusion of bellows means that the helicoid/lens mount is adjustable to allow the photographer to use a variety of lenses, from 65mm to 180mm, without needing to purchase or carry multiple sized lens cones, but by simply swapping out four threaded steel spacer bars.

“SnapShot is great for both experienced film photographers and someone wanting to try their hand at large format photography for the first time. Its light weight and multi-format design means that it can be easily carried on a camera strap, or in a small bag, when going out for a walk without needing to carry a tripod. Alternatively, if a photographer wants to shoot some long exposures, or compose their scene on the ground glass, the integrated tripod mount means it can be used on a fixed mount. 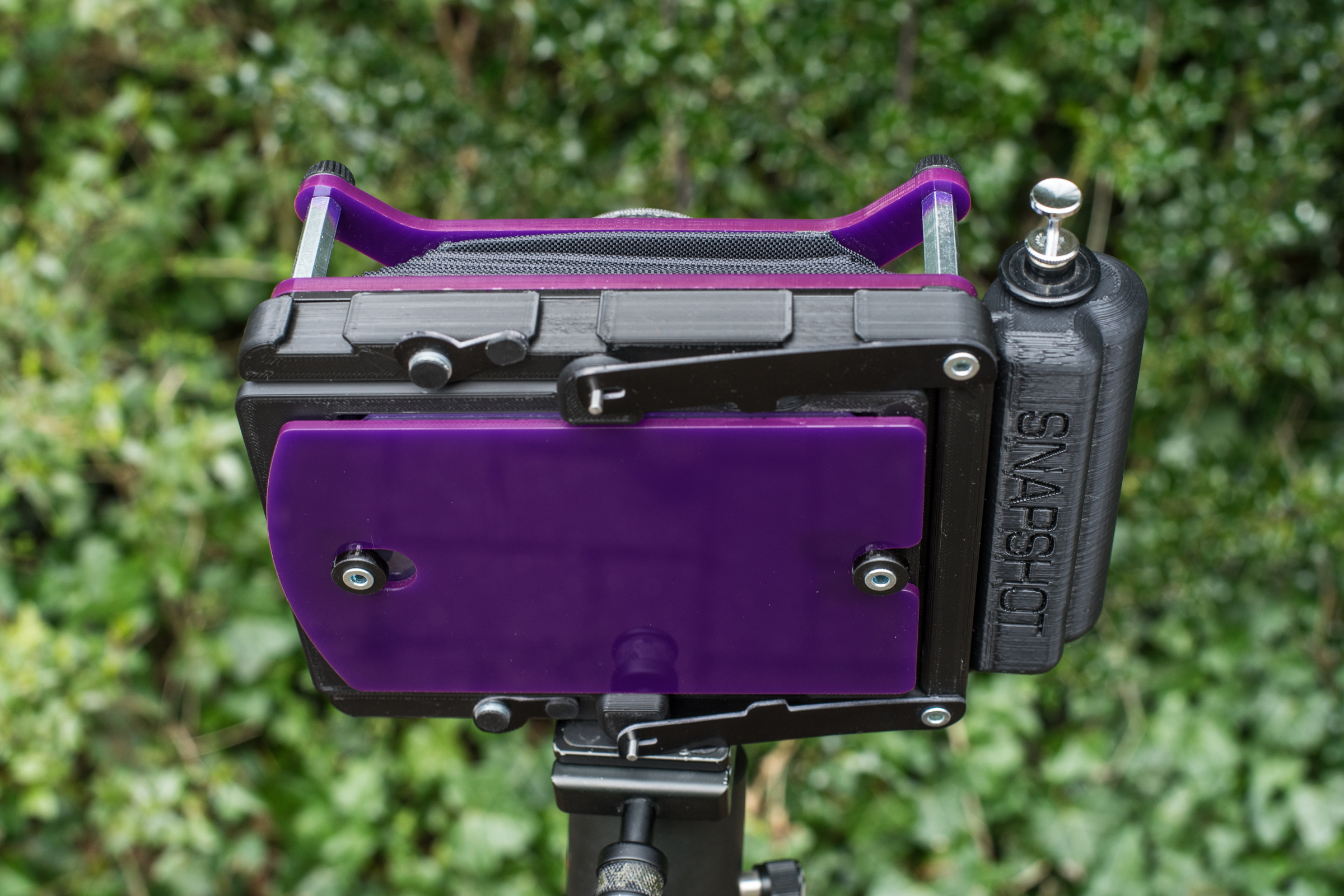 The camera comes with a range of accessories. “The Snapshot Camera itself, with grip and traditional spring back/Graflok cams. An acrylic adjustable bellows plate, in a choice of eight colours. Four steel spacer bars, sized according to requirement. Black enamelled brass M65 helicoid, with a 17-31mm focusing range. Black enamelled aluminium threaded lens board, sized according to requirement.”

He says additional spacer bars and lens boards are available via the Chroma Camera shop.

Is this an easier camera to use on the hoof? “Definitely. I can put my Snapshot, with a Grafmatic six-sheet film holder, in a small camera satchel and go out for a walk during a lunch break without any additional accessories.”

Steve says the portable design of the SnapShot makes it stand out from most other large format camera on the market.

“Whilst there have been handheld large format cameras around since the 1950’s, with classics like the stainless steel Globuscope, I don’t believe there have been any with truly multi-focal length design, nor custom colours. The film back design also means that it is a truly universal camera for medium and large format photographers.

“Large format photography is definitely a medium which conjures up images of photographers being weighed down with masses of kit, heavy tripods, huge bags and dark cloths. Whilst none of these images are particularly wrong (!), the SnapShot system means that you can gain many of the advantage of large format photography, like masses of detail, huge resolution, and the feeling of holding a little stained glass window in your hand with slide film, without any of the bulk.

“This means that it’s slightly less intimidating to someone completely new to the format, and hopefully also means that many more people will decide to try out large format photography for themselves.

The SnapShot is available at Chroma Camera for £195.

I’m lucky enough to have purchased an Advanced 4×5 in a really cool purple color. The quality is great, customer service from Steve is really good, and the camera is wonderfully light. Great to backpack with. Chroma is bringing large format to a new generation of photographers. The Snapshot seems like a great idea – I thinkI found the first item on my Christmas list for 2020!