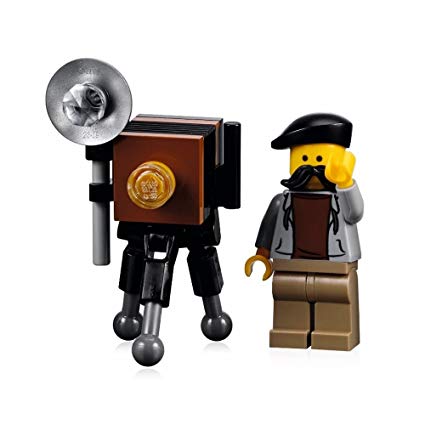 Lego’s Minifigures have been a massively popular addition to the Danish toy giant’s line-up.

The Minifigures series launched in 2010 and so far counts some 510 individual figures with accessories, including figures from some of the world of Star wars, The Simpsons, harry Potter and the Marvel Universe.Well, to that you can the analogue tribe – Lego appears to have created a minifigure of a  large format photographer.

Recently shared on several Facebook groups, the figure includes a large format camera on a tripod, wielded by a photographer with some suitable hipster facial hair. The figure comes from one of the Lego City sets, with a specially created large format camera (darkslides, sadly, not included).

Should you want to add a figure waiting ages for the right light and staring sniffily at the other Minifigures shooting on 35mm or (gasp) digital cameras, then you can find the figure on Amazon for $14.95.

The film-shooting figure is one of several camera-toting figures you can buy online, which also include a “paparazzi”-style press photographer, whose camera sports an off-camera flash large enough to illuminate even the darkest environment.

He even has my mustache.