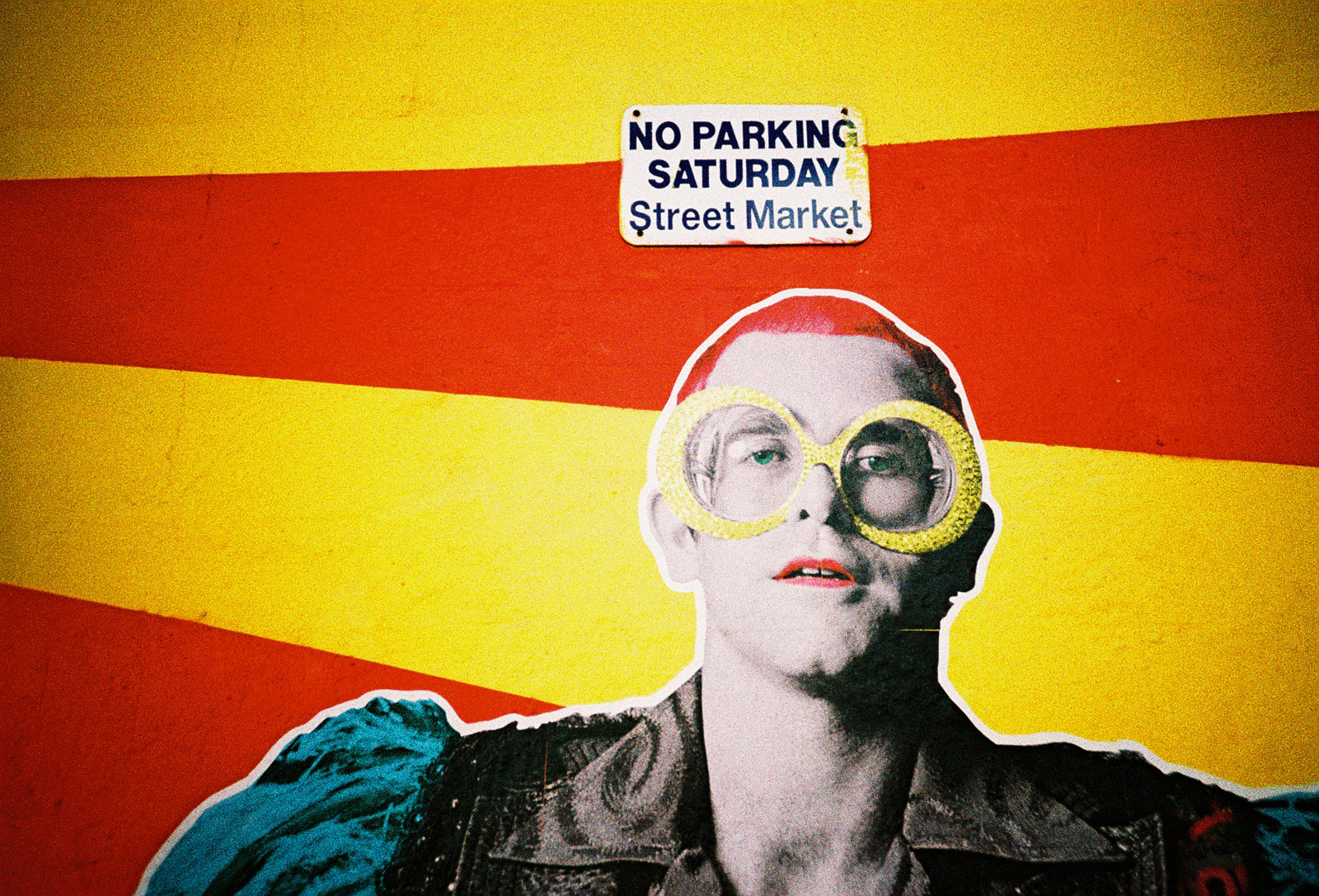 It is little more than an hour from the train stations of south London to Brighton. When the mercury rises, there seems to be no better place than the crowded, colourful Laines.

Brighton draws alternative crowds of all stripes, a catwalk show amid the colourful chaos of the graffiti and the brightly painted shopfronts.

If you haven’t already guessed, it’s a fantastic place for street photography.

Brighton is only a town for black and white when it’s overcast. There is such colour on every corner that it seems churlish not to go for as saturated as possible.

As I’ve written before, I’m a huge fan of the LOMO LC-A family of cameras for street photography. They are a perfect tool for stealthy shooting: small, easy to operate (once you master zone focus) and incredibly quiet.

I popped down to Brighton last April, taking part in a photowalk with film photographer Anil Mistry. Anil and I have appeared as guests together on the film photography podcast Sunny 16 a couple of times, and have met a few times for walks around London. He lives not far from Brighton and runs photowalks, including public ones with an emphasis on film photography.

We met on a springtime Saturday morning, outside Brighton Station, and set off at a relaxed pace unto the Laines, the winding pedestrianised streets that are one of Brighton’s undeniable tourist attractions, full of antique shops, cafes and independent traders.

I bought a few cameras with me, one of them being my LOMO LC-A+, the tweaked version of the original LC-A LOMOgraphy first released in 2006. This featured a host of improvements including a higher meter sensitivity up to ISO 1600, aswell as a multi-exposure function. It feels a lot lighter than my Soviet-era LC-As, given that the body has mostly switched metal for plastic. While it doesn’t have the surprising heft of the original LC-A, it doesn’t feel fragile either. The dozen films I’ve shot on it have all had that trademark LOMO saturation and vignetting.

I’ve shot with LC-A compacts for 20 years now and I’ve become pretty adept at using them as a street camera. There’s no focusing aids in the viewfinder (the LC-A used to have a needle showing you the chosen distance) so you learn by feeling your way around the lever that chooses the camera’s four distances: 0.8m, 1.5m, 3m and infinity. It takes a little practice , but it’s pretty intuitive. It also allows to shoot without the camera up at your face, making it easier to snap candid shots without drawing attention to yourself. The camera’s shutter does its job with the quietest of clicks.

I bought with me two rolls of the best slide films for cross processing with me – a roll of Agfa CT100 Precisa and another of Kodak Elite Chrome Extra Colour 100. As I wrote in this post, these films are amongst the very best for cross processing. They have a blue bias, contrast is fantastic, and grain is heightened. Fantastic for saturated sunny days.[/caption]

Our photowalk wended its way around the lanes – packed with shoppers and daytrippers – and past weekend markets, making the occasional pitstop at one of Brighton’s many pubs. The LC-A+’s minimum focusing distance of .8m, or just under three feet, means you can snap away at close range: even an arm’s length across a pub table, like I was doing below.

The LOMO style is inextricably linked with Brighton, and not just because of the colours and the quirky locals; local photographer Kevin Meredith aka LOMOkev, whose portfolio of super-saturated LOMO shots became a huge hit on photo sharing site Flickr during the early 2000s. (If you can, pick up a copy of his excellent book using compact film cameras, Hot Shots). LOMOkev may not be quite as prolific with his LC-As these days but his influence is there anytime someone like me loads up a LOMO and stalks Brighton’s streets.

Brighton is a fantastic place to take photographs, but the photowalk brought a new aspect to it – and not a little encouragement to keep snapping away. By the time we made it to the pier, which gazes out at the skeletal wreckage of the original Victorian pier, my two rolls were nearly exhausted. It was my first photowalk in this town, but definitely not my last.

Great report!
I still remember the happy days I spent in Hastings and Brighton many (too many!) years ago, with my Fujica STX1 and Fujicolor films.
Congratulations for your shots