Home Analogue lifestyle Repackaged films are helping the film revival, not harming it

Close your eyes. Imagine you’re back in a camera shop in the 1990s.

It’s a well-stocked camera shop. No handfuls of Fuji Superia 200 and Kodak Colorplus here. Nope. There’s Kodak Elite Chrome in 100 and 200 and 400. Agfa Portrait 160. Fuji Press 800 film (just add a motordrive and some sharp elbows to keep the rest of the press pack away). Agfa CT100 Precisa for that cross-processing contrast. Kodak’s Ektar 1000 and the irreplaceable Kodachrome. You are spoilt for choice.

Film photography was at its commercial peak and the enormous amount of money being spent allowed film companies to spend small fortunes on R&D. Emulsions were tweaked and reworked and tweaked again. The research departments came up with finer grains, more brilliant colours, and extra sensitivity to low light.

And those film companies could afford to because everyone from celebrity photographers to those shooting just at holidays and Christmastime were all shooting on the same thing – film. 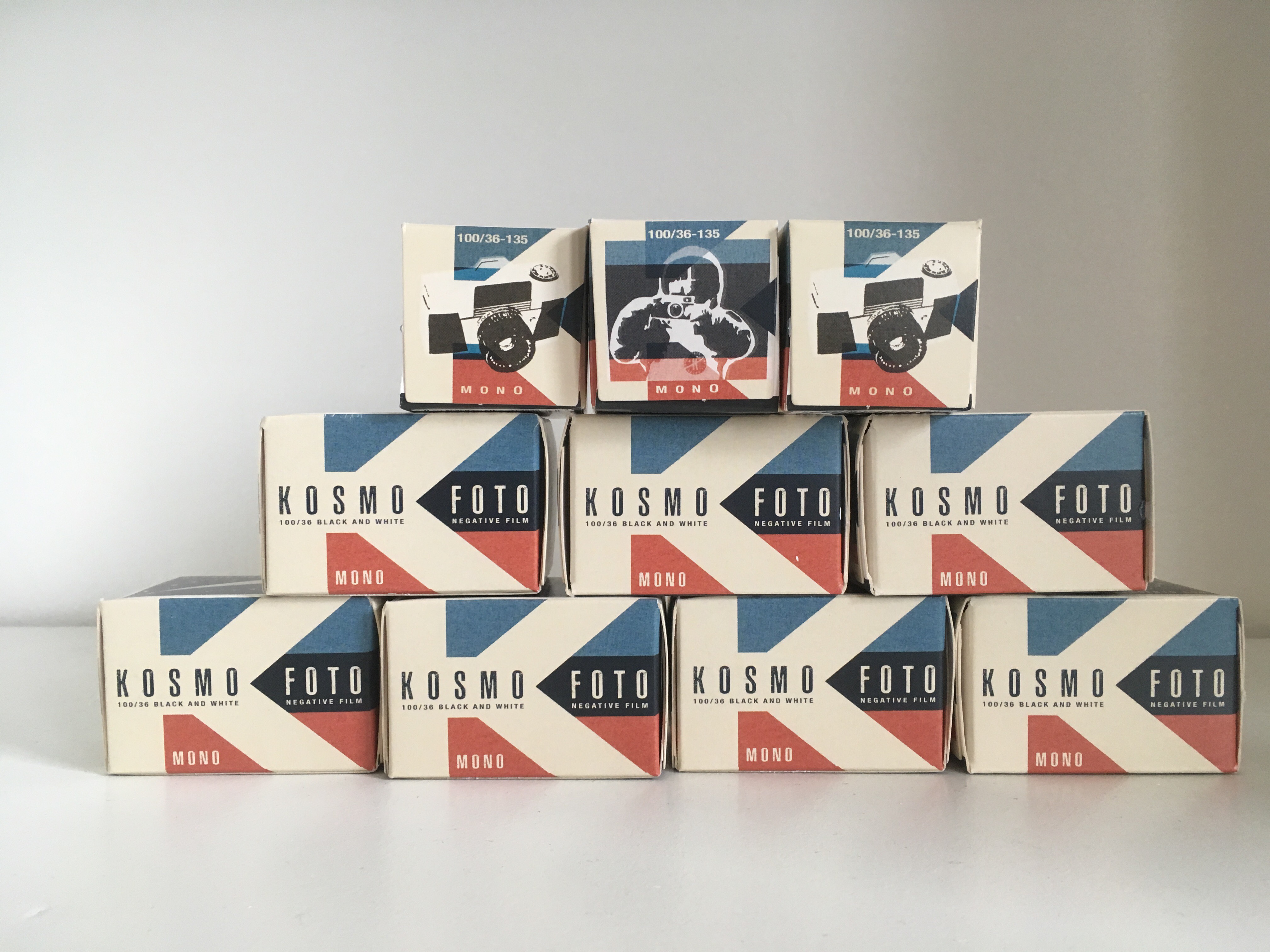 Walk into a camera store in 2019, and it doesn’t quite have the same range, does it? The seemingly endless range of Kodak and Fujifilm emulsions have been ruthlessly pruned back. That classic Agfa diamond logo is gone forever. So too are a range of smaller brands such as Efke, Forte, Ferrania and Konica.

But here’s the thing, While the range isn’t what it once was, but it’s certainly a lot healthier than it was 10, or even five years ago. Something happened. Film started to weave its magic on a younger generation, one that had never grown up with the delight of waiting days for that magic package of prints to pop through the letterbox. Ands as a result, new film brands began to appear.

These brands are new, but in the most part the films inside the boxes aren’t. They’re existing films, given a new name and new packaging.

The vast majority of these new film brands are black-and-white films. There’s a simple reason for this – more people are making black-and-white film because it is cheaper and simpler to make than colour. While the film market is increasing, it’s still not healthy enough for film companies to release colour films without very careful consideration (just look at how long it took Kodak to go from announcing the return of Ektachrome to the film actually appearing on shop shelves).

I know how this works, because I’m one of them. Kosmo Foto Mono, which launched at the tail-end of 2017, is produced by Foma Bohemia, a Czech producer that has been making film since the early 1920s. It’s one of their Fomapan range of black-and-white negative films (Mono is 100-ISO, so I’ll let you go ahead and be armchair detective as to exactly which one it is).

Foma has partly negotiated the post-digital landscape by offering its roster of panchromatic black-and-white films – Fomapan 100, 200 and 400 – available to other producers who want a branded product.

The Arista EDU films in the US are Fomapan. So too are Lomography’s Earl Grey and Lady Grey films. I’m sure there are others too.

Foma is one of a handful of companies providing a means for new film brands to bring their white-label wares to market. They’re small enough that they don’t require huge minimum orders.

If you want to make your own film, you have to find a producer who will make it for you. To bring an emulsion to market means a great deal of research and development – expensive research and development. The test emulsion is produced in a small amount and rigorously tested before a full master roll – usually enough for tens of thousands of rolls of film – is made. You need deep, deep pockets for this. Kosmo Foto has been told by one of the major film producers that you won’t get change out of £100,000 to produce a black-and-white film from scratch (and you might as well double that amount and produce as much of the emulsion as you can to keep costs per roll down).

And colour film? You had better either win the lottery, or find a kindly benefactor who doesn’t mind shelling out a million dollars before you see a boxed physical product. Aside from Kodak and Fujifilm, the only other company who has recently produced a colour film is Lomography with their soon-to-be-released Metropolis colour negative emulsion. Whatever it is, if it is indeed a brand new colour emulsion, it won’t have come cheap.

Third-party films are nothing new, either. In the UK, the camera store chain Jessops had a whole family of films, including a range of chrome films that were rebadged Fuji Sensia slide films. So too did did chemist/film developing chain Boots, which also had a range of own-branded film. The same was true for supermarkets, camera stores and development chains in places such as the US and Germany.

Repackaging an existing film is the only practical way for a boutique film brand to release a product. There is some resistance to this, and it’s only natural; most repackaged film cost more than the original emulsion. That’s the economy of scale. Foma can produce 100,000 rolls of Fomapan film at a time. Kosmo Foto Mono is usually only produced in batches of 2,500 to 3,000. That obviously means I can’t spread the production costs as effectively as someone making tens of thousands of rolls at a time.

Then there’s all the other stuff that you have to add on as a cottage industry – decent mailing boxes so your film doesn’t end up crumpled and crushed; fees from warehouse storage and fulfilment; accountancy fees; packaging materials and address labels; blog hosting and shop software fees. It all adds up. And you still have to offer the film at a reasonable cost so that people don’t feel like they’re being gouged to take a punt on something new on the film shelf.

But there are advantages. Being a smaller brand means you can have a little more fun with the packaging. The lines from major producers have to adhere to a brand “look” – think of Ilford Photo’s packaging, where the film boxes are differentiated only by the colours of the film’s name, or Kodak’s riffing off its yellow box heritage. It makes sense, but it means there’s a lot less colour and variety on the shelves compared to the old days.

The boutique brands add some much-needed colour and novelty. Look at the sweet shop pop of Street Candy ATM 400 or the retro orange and blue of Ars Imago’s limited-edition Imago 320. Look at the return of Svema film, a Soviet giant that has returned thanks to its repackaging of Agfa-Gavaert and Tasma films. Look at Film Washi, a true one-man-band running the smallest film factory in the world, and repurposing industrial films that would never otherwise be available to stills photographers. The same can be said for Japan Camera Hunter’s Street Pan 400, a traffic surveillance film that has never been made available in 35mm or 120 before.

And of course I’m going to mention Kosmo Foto Mono, with its cosmonaut and space graphic inspired by Eastern Bloc graphic art (created by My Mate Does Art). You can’t help but notice it. I don’t think it’s a coincidence that since the launch of Kosmo Foto Mono and some of the other boutique films, Foma itself brought back its dazzling packaging for its 120 films from the 1930s. It’s a limited-edition run as the company prepares to celebrate its 100th anniversary. (Get your hands on some, you’ll want to keep the boxes forever.)

The emulsion in the box might not be as revolutionary as the packaging, but apparent choice can be a choice in itself. And rather than taking money away from the producers’ own films, the anecdotal evidence suggests this is only a positive. Foma have told me they are producing as much Fomapan-branded film as they always have; Kosmo Foto Mono, and Lomography’s family of Foma films, haven’t hurt their sales in the slightest. And, on top of this, they’re making more money from producing their film for third parties. And that’s not an inconsiderable amount – Lomography’s films sell by the bucketload, and more than 30,000 rolls of Kosmo Foto Mono have been produced in the two years since it went on sale.

More money coming into the film market means more money for producers like Foma to pour back into research and development (Foma used to make Fomacolor colour films back in the days of the Eastern Bloc). More film being sold means more profits for the shops selling it. More film being shot means local labs are more likely to stay in business. It all helps film survive and thrive.

This is what the Olympus OM-1 could have looked like

The problem with this is that several re-sellers will have the same film with different names. Leaves the buyer at a disadvantage thinking he/she is trying out different films.

hm, you say that jessops chrome films were rebrended sensias?

i discovered that jessops exists when i bought and shot and processed some unbranded slide canisters.

the iso was 100. the canisters had inscriptions in german.

when developed, i have read ‘jessops cs100’ on the film itself. so i assumed that’s produced by jessops.

if jessops are not producers of the film, could they agree with the real producer to write their name on the film itself?

The situation is not really all that different from other consumer products – I’ve noticed that, it is not uncommon for different packaging or names of essentially the same product & owned by the same company. However, whether rebranded or not anything that has more film being sold, the better.

[…] It’s tempting to poo-poo rebranded/repackaged film stocks, but Kosmo’s Stephen Dowling makes a strong argument why this is a good thing, not a bad one. Regardless, these folks have clearly picked both a willing […]

No 1: There is nothing new in this, it was a very common practice back in the days before digital, companies like Ferrania and Agfa produced huge amounts of film that was rebadged, and people knew and I never heard anyone complain. No 2: It appears to me the people who complain have sour grapes, and seem offended that someone nowadays is using a practice that was very common back in the day, and to me seem motivated by jealousy. People like Stephen, Bellamy, Lomography etc are working their hearts out to promote film, and probably only get paid a… Read more »

Absolutely agree. Countless varieties of repackaged films were made during film’s golden age.

let me get this staight. kosmo is really foma 100? if that’s the case, please help me understand why I would buy kosmo for what I assume would cost more than the 3.85 euros at Fotoimpex.

Please read the article, Edu. Thanks.

The repackaged Svema films have the added benefit of being dirt cheap – at least they were when I got a bunch of them from Moscow. The boxes are ugly and the cassettes crappy, but you could say it’s their way of honouring the Svema heritage. Anyway. So you’re saying launching a new black and white emulsion costs plenty of money? How about relaunching an old one? The fine people at Bitterfeld-Wolfen are still happily coating two ORWO emulsions (recently repackaged by Lomography), and ORWO obviously made a good deal more emulsions back in the day. So I was wondering… Read more »

Well said. It is definitely an option. The Kosmo Foto pockets are not deep enough for this at the moment, however.