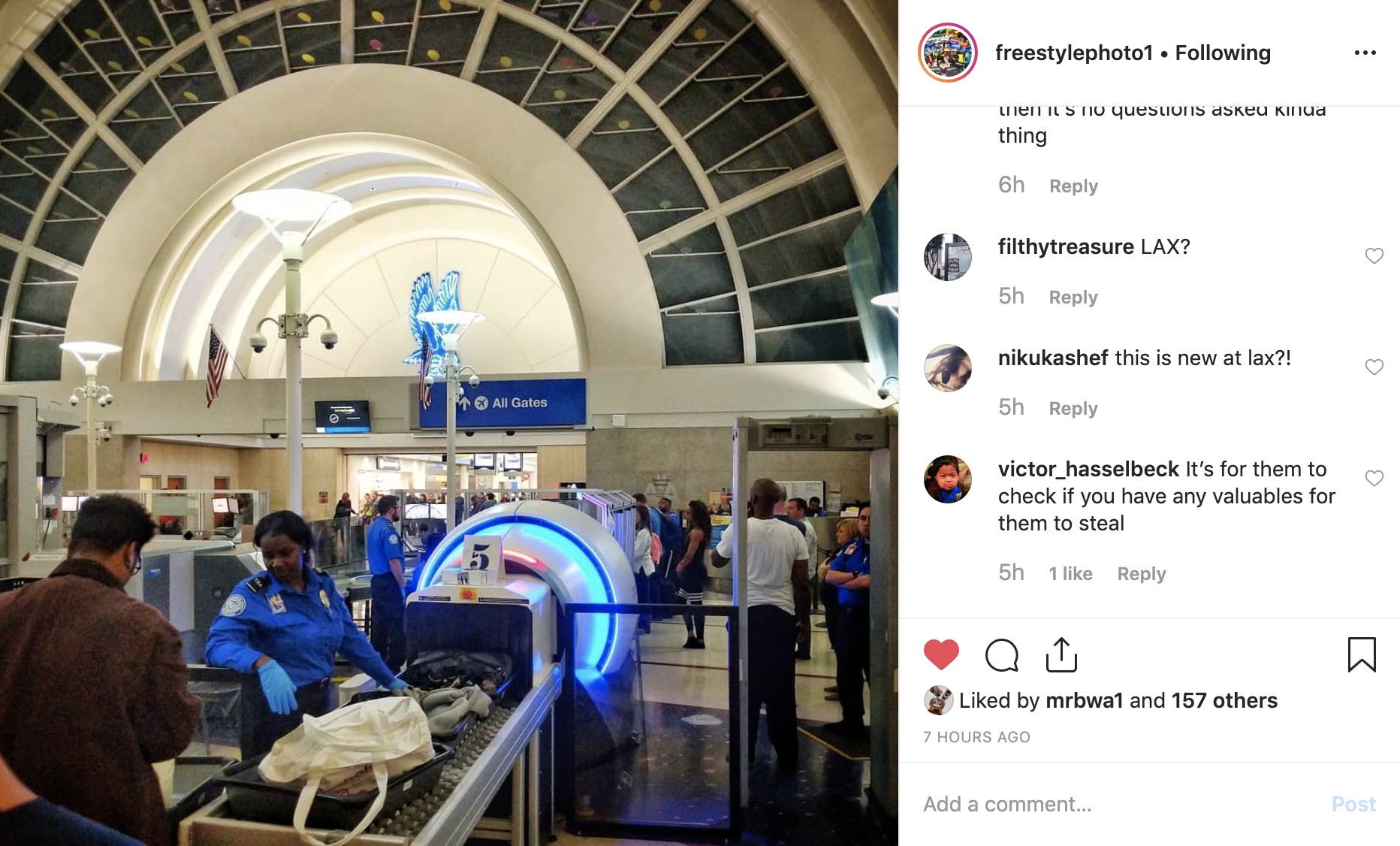 If you’re flying through US airports with film soon, be aware – the new hand luggage scanners coming into service could destroy unprocessed film after just one scan.

Los Angeles photography merchant Freestyle Photographic Supplies posted an image of the new CT scanners at LAX Airport on Saturday (19 October), warning film photographers to request a hand search rather than let their film go through.

The post read: “Watch out for these machines at the airports. It’s a CAT scan and will absolutely destroy any film in a second. The equivalent of putting your film through the old scanners about a thousand times. Lead bags won’t save you.

“The nice #TSA agents at #LAX had no problem with a handcheck and seemed to be informed that this is no joke.”

Freestyle said in the post that the new scanners had been installed at LAX this month.

Read more: How to travel with film

Freestyle’s warning is backed up by information on film producer Kodak’s own page for those travelling with film, (though this warning is from the early 2000s).

It reads: “There are two types of higher-dose scanners. The first type is similar to a hospital CAT scan and uses a low-dose scan followed by a higher-dose scan on specific areas of the baggage. The second type gives a high-dose, full bag scan on the first pass, damaging the film immediately.

“Tests indicate that there is significant fogging of unprocessed film when the film sustains a direct hit by either of the different scanner’s high-intensity X-ray beam. Faster films show a more dense fog.”

A statement from the TSA says:

“The x-ray machines used to screen checked and carry-on baggage will not affect digital camera images, slides, photo compact discs, picture discs, or film that has already been processed, including developed medical x-rays.
“For travel tips and information about our screening procedures and what you can bring, please visit www.tsa.gov/travel.
“Most x-ray machines used to screen carry-on bags should not damage undeveloped film under ASA\ISO 800.  There are a limited number of screening checkpoints that use x-ray equipment that may damage undeveloped film. These airports will have signage in front of the x-ray stating that the x-ray may damage undeveloped film.
“If you are traveling with the following types of film, please pack it in a clear plastic bag, remove it from your carry-on bag at the checkpoint, and ask for a hand inspection:
•    Film with an ASA\ISO 800 or higher
•    Highly sensitive x-ray or scientific films
•    Film that is or will be underexposed
•    Film that you intend to “push process”
•    Sheet film
•    Large format film
•    Medical film
•    Scientific film
•    Motion picture film
•    Professional grade film
•    Film of any speed that is subjected to x-ray screening more than five times”

“They are not specific regarding whether LAX has machines that will damage film in carry-on  baggage.
“They will post notices if  equipment will damage carry-on film. They cover themselves from being responsible for high value film  i.e professional grade film, motion picture film,  sheet film, etc.
“Passengers can ask for hand-inspection of  film. It does NOT say that hand-inspection will  always be provided. The bottom line is passengers can ask for and expect to have hand-inspection. Simply say it is expected to pass the film through more than five inspections on this and future flights.”

On the TSA’s own website, the agency says the scanners have been unveiled in the following locations:

The scanners, which are also being installed in other airports across the use, subject the film to a similarly strong dose of x-rays to those used to check hold luggage. As many photography resources have detailed, the scanners in use since the September 2001 attacks will fog almost any film they come into contact with.

The most recent models of non-CT hand luggage scanners in use in most airports are much kinder with film, yielding no discernible results even after a dozen or more scans.

However, more airports are likely to take onboard the new CT scanners because they scan luggage faster – leading to faster queueing at security.

It’s worth noting, however, that no x-rays will damage film if it has already been processed, so any processed slides or negatives can safely go through the new scanners.

Have you had any experience with the new scanners? Has your film been fogged? Any tips on getting film through undamaged at particular airports? Please leave a comment below.

How legit is this m8?
The Kodak advisory is from 16 years ago and that’s gives massively out of date information.

Thanks for this useful – if scary! – information. It would help to know if these machines also come with the useless signs that say lower ISO films can be safely run through. Useless, because it didn’t take into consideration the likelihood of cumulative damages from repeated passes. More to the point, I wonder if Security personnel have even been briefed to the fact that a polite request from a photographer/traveler for hand inspection is now even more reasonable and appropriate. Have any readers had direct, first-hand experience with this new equipment and thoughtful (or otherwise) responses from the Security… Read more »

Worried me quite a bit but upon developing I got images as I expected.

That being said, I did not get a good look at the machines nor did I look for a sign since I didn’t suspect anything had changed. But from what I recall they did not look like the pictured scanners.

No super helpful, but it seems to indicate that if these machines are out there they are not at all terminals/checkpoints.

[…] the new CT Scanners are installed at the following airports. You can find more details at the Kosmo Foto site or the TSA […]

Whelp – I just yesterday went to/from ATL via ORD with my camera and 3 rolls of 35mm, and just read this now after it was mentioned on the Classic Camera Revival podcast. I have not ever had trouble with the scanner for carry-ons (not checked luggage) in the US and EU, but it looks like times have changed. None of the scanners I went through in the Pre-check line looked at all new (and none had a soothing blue LED archway) – so I’m hopeful I did not wreck my film. Rats.

They have something like these at Schiphol. The telltale is that you don’t have to take your laptop/electronics out of your bag. Mindful of this article, I worried about it. The technician on duty reassured me that my ten rolls of film from Japan would be safe and that would be the case up to 1600 ISO. He said he understood how important they where and used film himself. Anyway, 4 of them had been zapped by a regular scanner in Ireland, and all of them after exposure got zapped by a regular scanner leaving Japan, then got zapped in… Read more »

I passed about 8 times through Schiphol last 12 months with 400/200/100 ISO film. I do fly usually to the same route to China. Initially I suspected the scanners in China. Well I was wrong. I had one flight returning from Japan through Schiphol, film damaged as well. Then onnmy next trip from China I changed flight in Paris, (same route I usually fly, only change I did was to change flight in CDG instead of AMS.) guess what… films are in perfect condition. All other that passed through AMS have are fogged. The 100 ASA are in better condition… Read more »

That is odd. I’ve manually checked the negatives against ones that’ve never flown and they look the exact same.

I amn’t discounting what you’ve said.

I had told them I was flying with film, and had left the cartridges in a different bag while it went through.

The most important thing is that it’s possible, but I would like to know why one batch was unnaffected and another was.

hi, I also pack my films in a separate bag. I passed also in October through Schiphol coming back form Japan NRT. All of the 400 films where visible fogged. See my there with examples
https://www.photrio.com/forum/threads/new-airport-scanners.170709/page-3

I change on my last trip and did the transfer in CDG in November. All was fine.

[…] issue with security scanning at airports is serious and real as Kosmofoto and others detailed last year. The issue is down to the new CT scanners used and the film companies […]