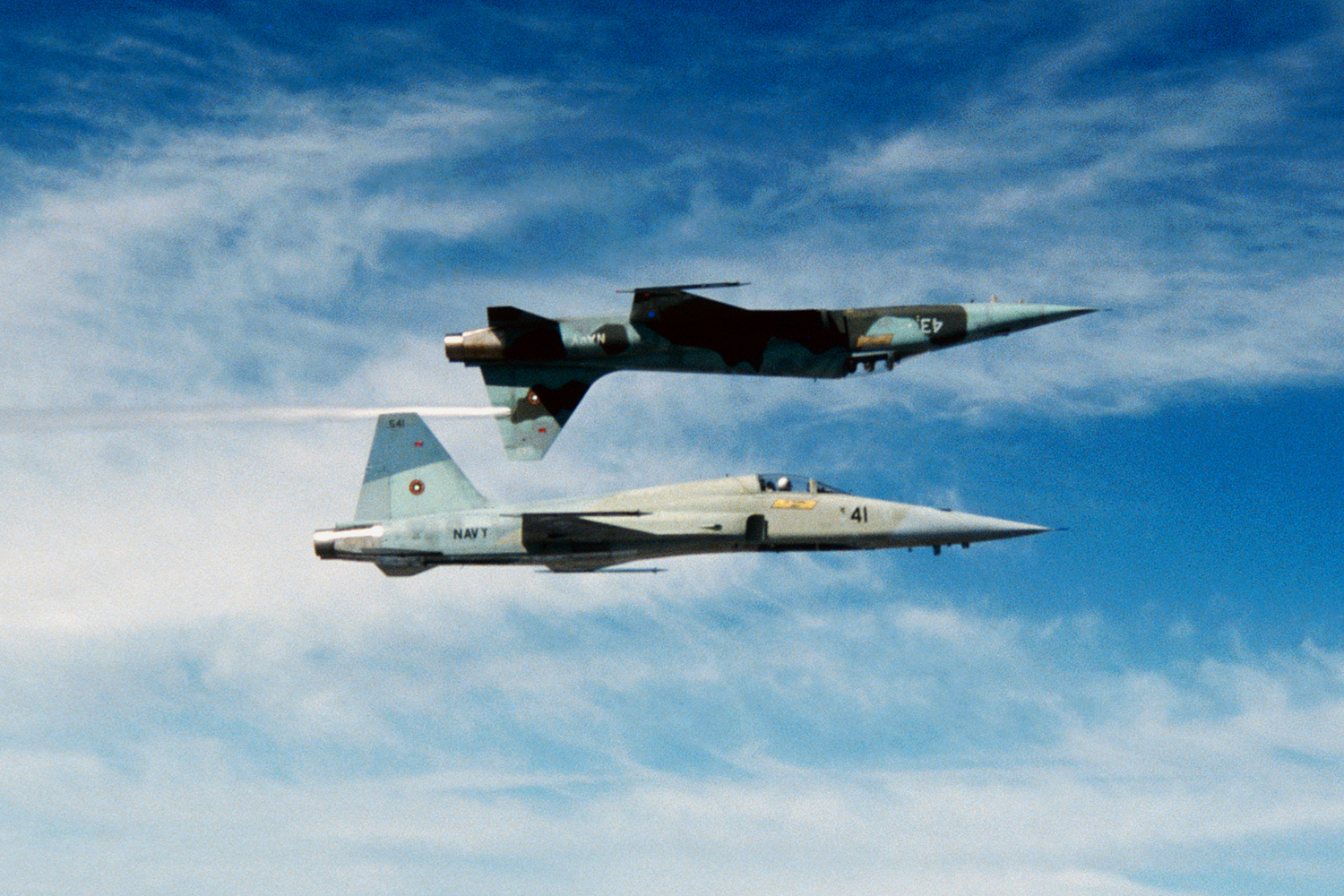 The US Navy learned a very important lesson in the Vietnam War. The legacy of that lesson still lives on today.

Among their fleet of formidable combat aircraft used in that conflict was the McDonnell-Douglas F-4 Phantom II. The Phantom was a two-engined fighter bomber almost the size of a World War II bomber and capable of flying at twice the speed of sound. It could carry a bomb load of 18,000lb (8,400kg) or as many as eight air-to-air missiles.

The missiles could shoot down an enemy aircraft from as far away as seven miles (11km) but they weren’t always accurate, however, and they needed a minimum distance to lock on to targets. Closer than that, and Phantom crews would have to dogfight enemy fighters with guns like the aces of World War One. Just one problem: the Phantom didn’t have one.

The US Navy, Air Force and Marines suddenly found their heavy, lumbering Phantoms having to dogfight with tiny Soviet MiGs, able to turn faster and armed with heavy cannons.

Losses started mounting. The US Navy set up a new school to train their pilots how to dogfight properly, using smaller, more nimble US jets to stand in for Soviet MiGs. They called it the Fighter Weapons School, but you’re more likely to know it from its nickname: “Topgun”.

Baranek, now retired from the Navy, was ta radar intercept officer (RIO) in a Grumman F-14 Tomcat, the giant, bat-winged fighter seen in ‘Top Gun’. He often took his camera on training missions, snapping  portraits of the school’s aircraft.

Recently he posted the stunning image at the top of the page on Facebook – two of the school’s Northrop F-5 fighter jets snapped in close formation – and Kosmo Foto decided to find out more about what it was like shooting film from the cockpit of a supersonic jet.

When was this shot taken?
June 2, 1985. My records aren’t always that good, but I remember this one was taken on a rare Sunday of flying, and referring to my logbook that’s the date that fits. I was an instructor at the Navy’s Topgun school and we normally flew Monday to Friday, but we supported a Marine Corps training exercise on that Sunday. It was a boring flight (which was also rare) so we took a few photos. Someone got the idea for this, we quickly set it up on the radio, and I took this photo. I only took one shot.

What were you flying at the time?
I was in an F-5F Tiger II, one of the three two-seat F-5s flown by Navy Fighter Weapons School – better known as Topgun. At that time the squadron also operated about six single-seat F-5E Tiger IIs and another six A-4 Skyhawks (also single-seat). I’d been a radar intercept officer in the F-14 Tomcat before becoming an instructor, so I always flew in an F-5F. 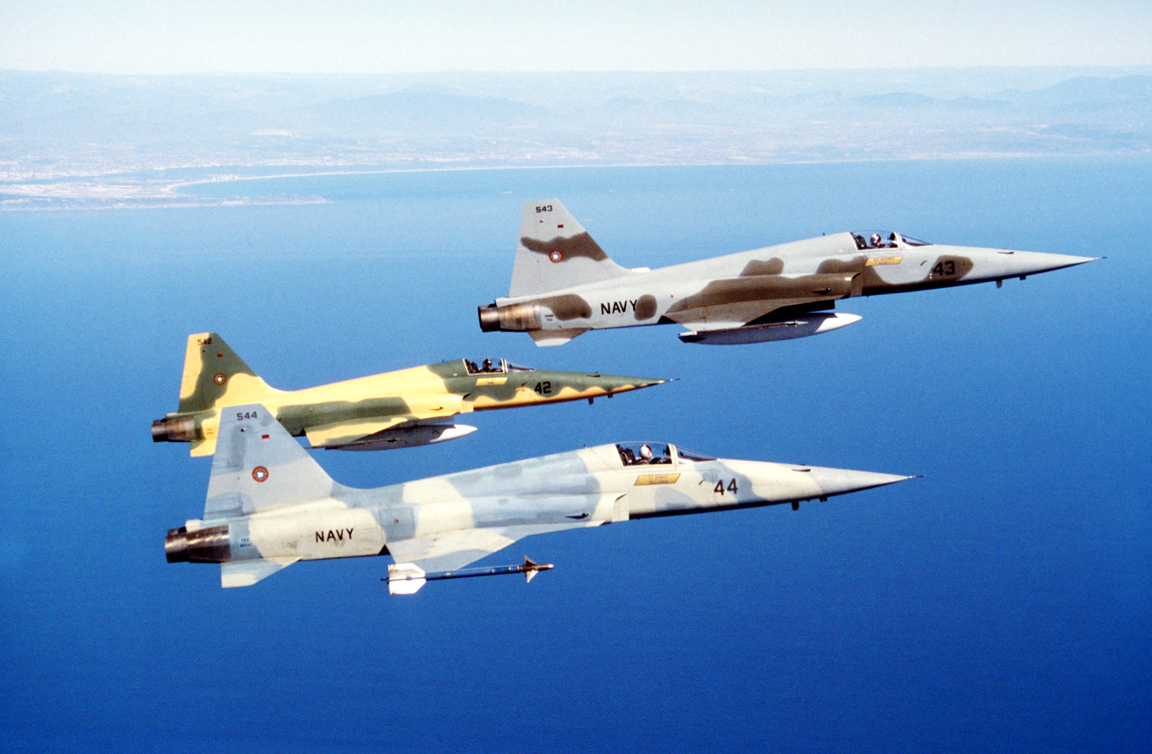 What camera and film were you using?
Ahh, good memories: Konica FS-1. I had used a Konica in college, so when I bought my own camera that’s what I went with. The price was right, I liked the exposure controls, and they had built in autowinders, which I wanted for aviation photography. It was stolen from my luggage on an airline flight in 1986 and I replaced it with an FT-1, which was similar. Later in my flying career I bought a Nikon.

As for film: this was shot on Ektachrome. Sometimes I selected negative film or Kodachrome for a specific reason, but most of the time my film choice was almost random. Once when I planned an evening shot featuring the F-14’s impressive afterburners I purchased a roll of ASA 800 or 1000 Kodak colour negative film. I shot the entire roll in about a minute and got one frame that was just what I was looking for (included here). I even like the grain.

How often did the F-5s do this manoeuvre?
We rarely did this exact manoeuvre. The Navy’s Blue Angels and other teams do something like this for air shows, but in the F-14 and at Topgun we flew tactical manoeuvres. To fly a manoeuvre like this was not especially difficult if the pilots thought ahead and maintained safety margins such as lateral offset.

What was your role at the time? Talk us through your aviation career.
I was a Topgun instructor when I took this photo. We had 18-20 instructors: about one fourth were back-seaters, the rest were fighter pilots. My career started with almost two years of flight training, following graduation from college. I then joined a front-line F-14 Tomcat squadron, which was my goal, and which turned out to be a lot more than just zooming around the sky – although that was very cool, as you can imagine. Let me plug my website, www.topgunbio.com, because it includes stories, photos, and videos that will give you an idea of it all. I spent 3 ½ years in the F-14 squadron, 2 ½ years at Topgun, and then I returned to F-14 squadrons and staff jobs, serving in the Navy for 20 years. I retired in 1999. 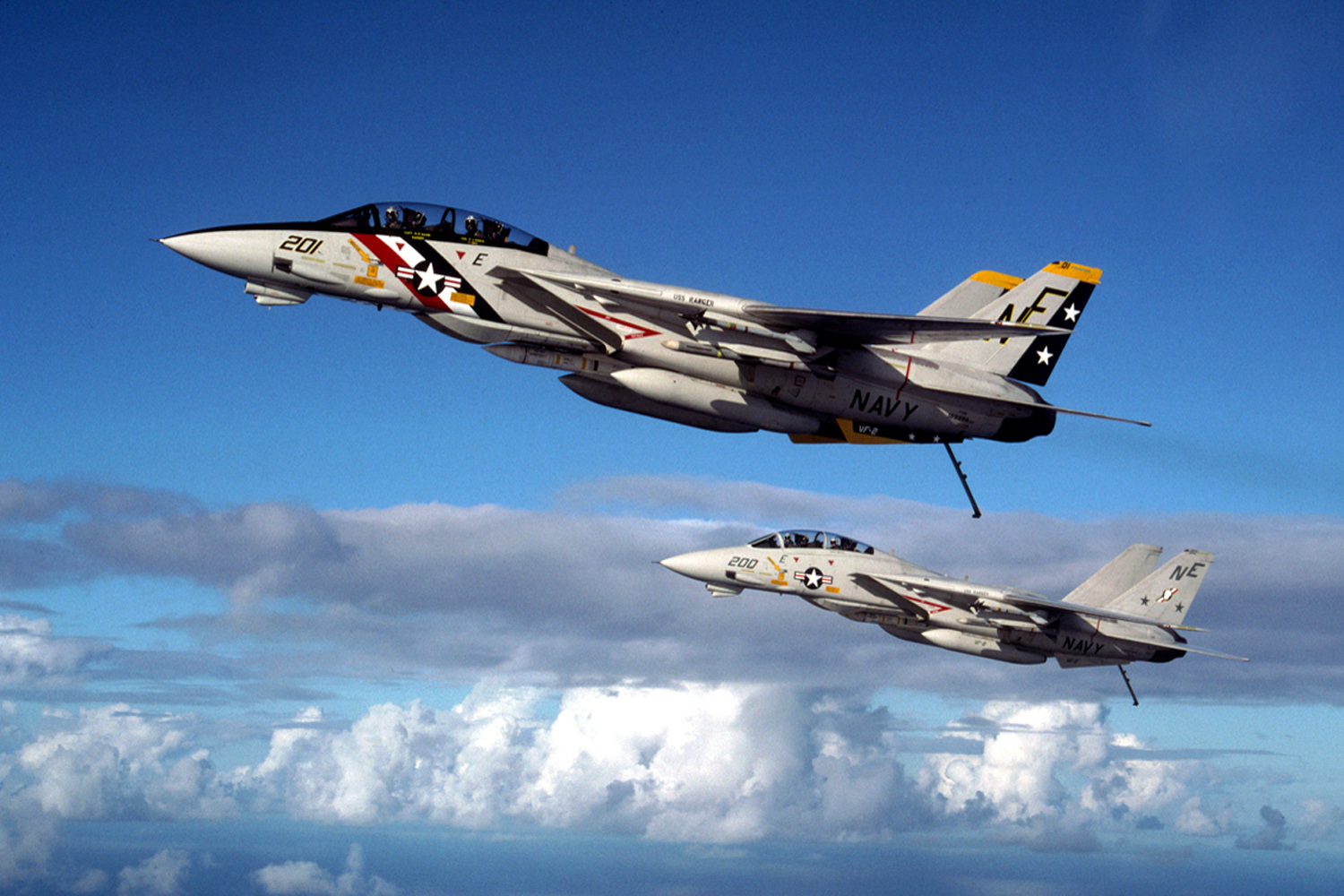 How easy was it to photograph and fly at the same time?
It ran the gamut, from “point, shoot, capture something spectacular” to complex issues with lighting and aircraft formation. As I mentioned, I was a RIO, so I always had a pilot who actually flew the plane (but there were also some pilots who took great photos). Most of the time I took photos that presented themselves because I didn’t want to interrupt our mission.

But we sometimes had a few minutes of free time and could set up a photo. Later in my career when I was more senior I did not want to prioritise my photography over the mission. Through it all, I captured some photos that I really like and am proud of, which I’m sharing here. But I look at some photos and wonder why I didn’t I shoot from the sunlit side, or wish I had noticed glare from the canopy. And I wish I had used more film: I usually shot one frame! 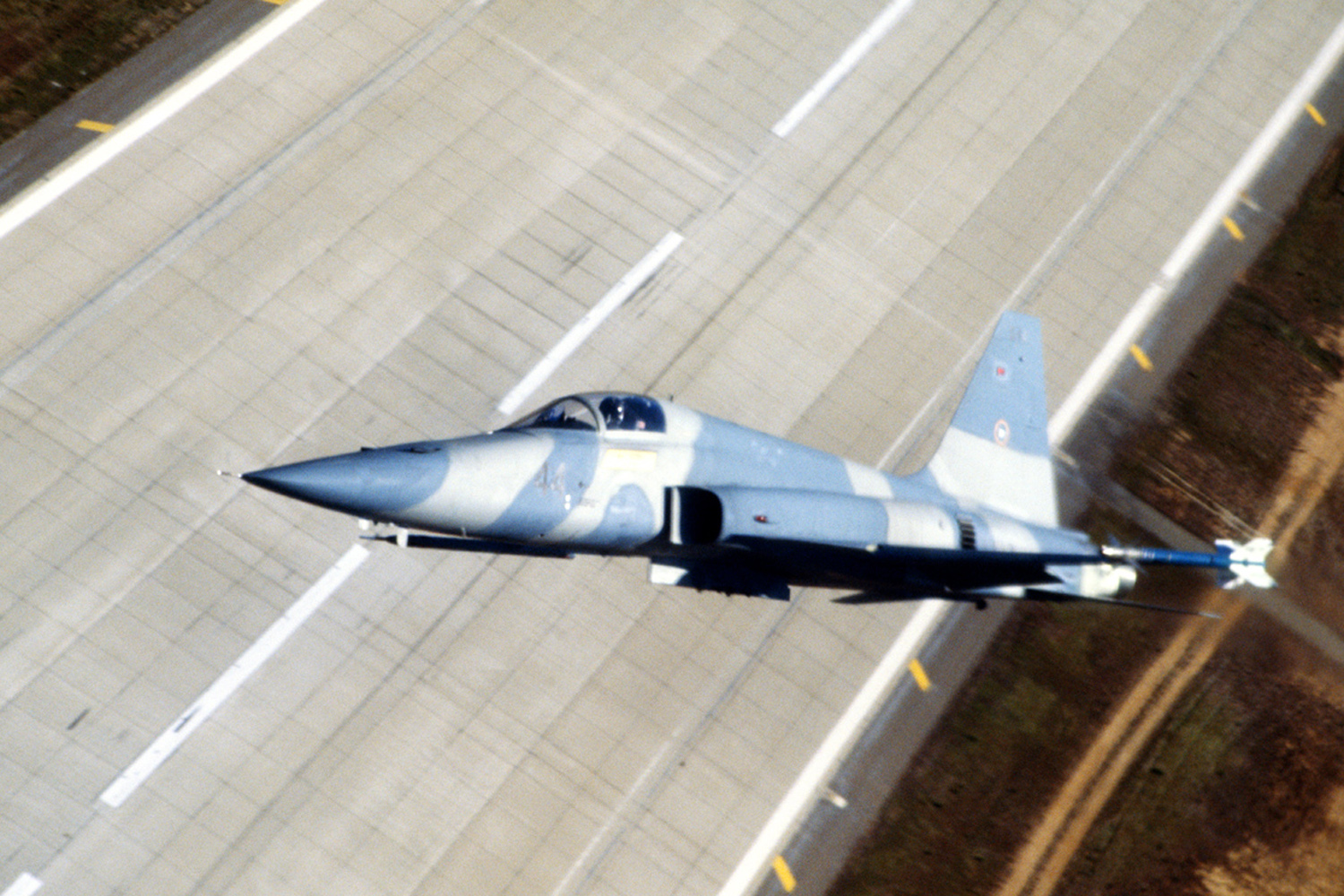 Is the F-5 shot the one you’re proudest of?
That’s a good question. In a word, no. I’ve basically overlooked this shot for the past 20 years. I’ve looked through my photos many times in the process of writing three books and multiple magazine articles, and this one never got the call, until it recently caught my eye. The photos I am proudest of involve multiple aircraft, or action shots during manoeuvres, or low-light shots. So this one has become a favourite. Some of my other favourites are in the gallery pages of my website.

How did you get into photography?
I would have to credit my father. He was an amateur photographer, but he had a good imagination and took quality photos. When I showed some interest he provided encouragement and constructive criticism. 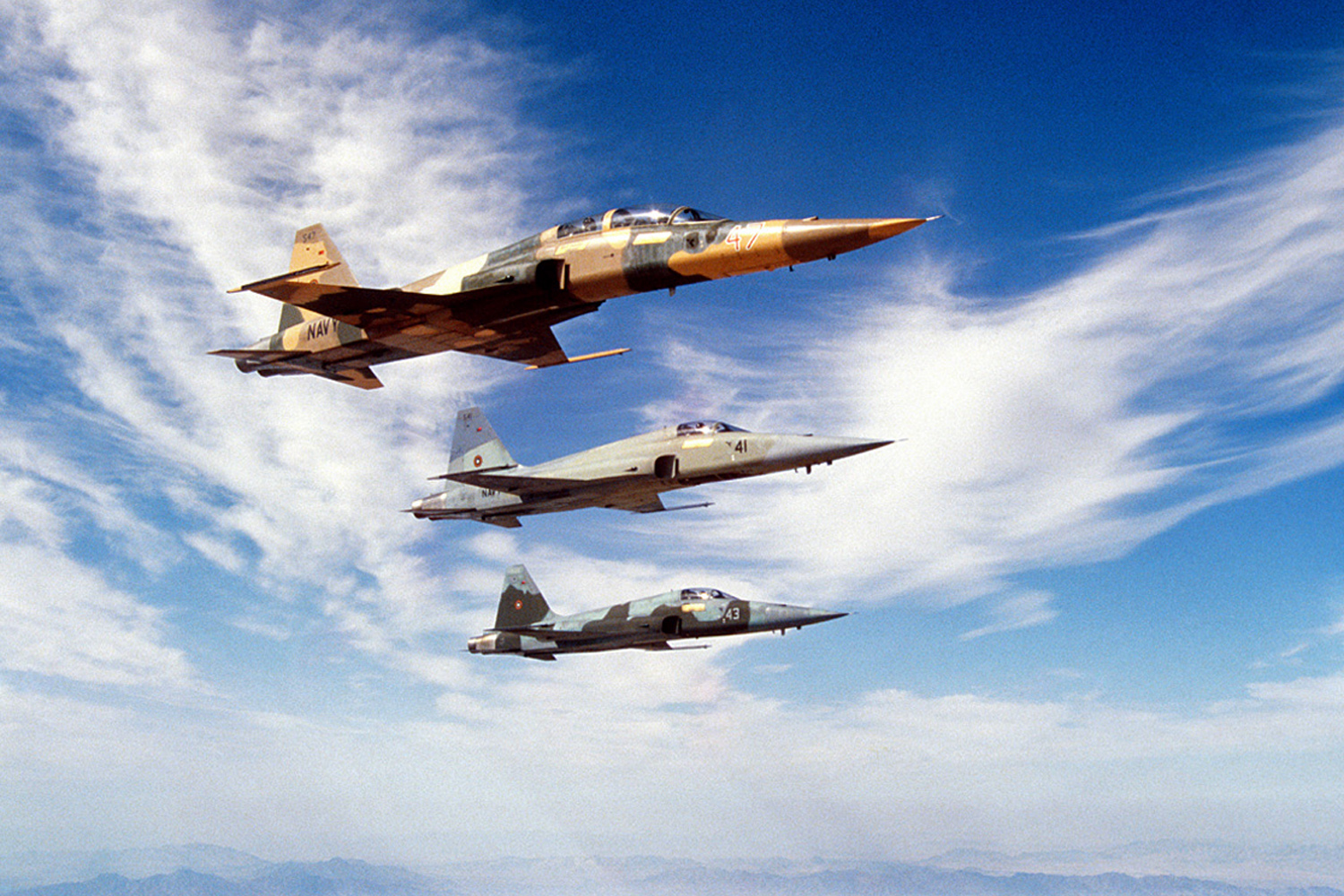 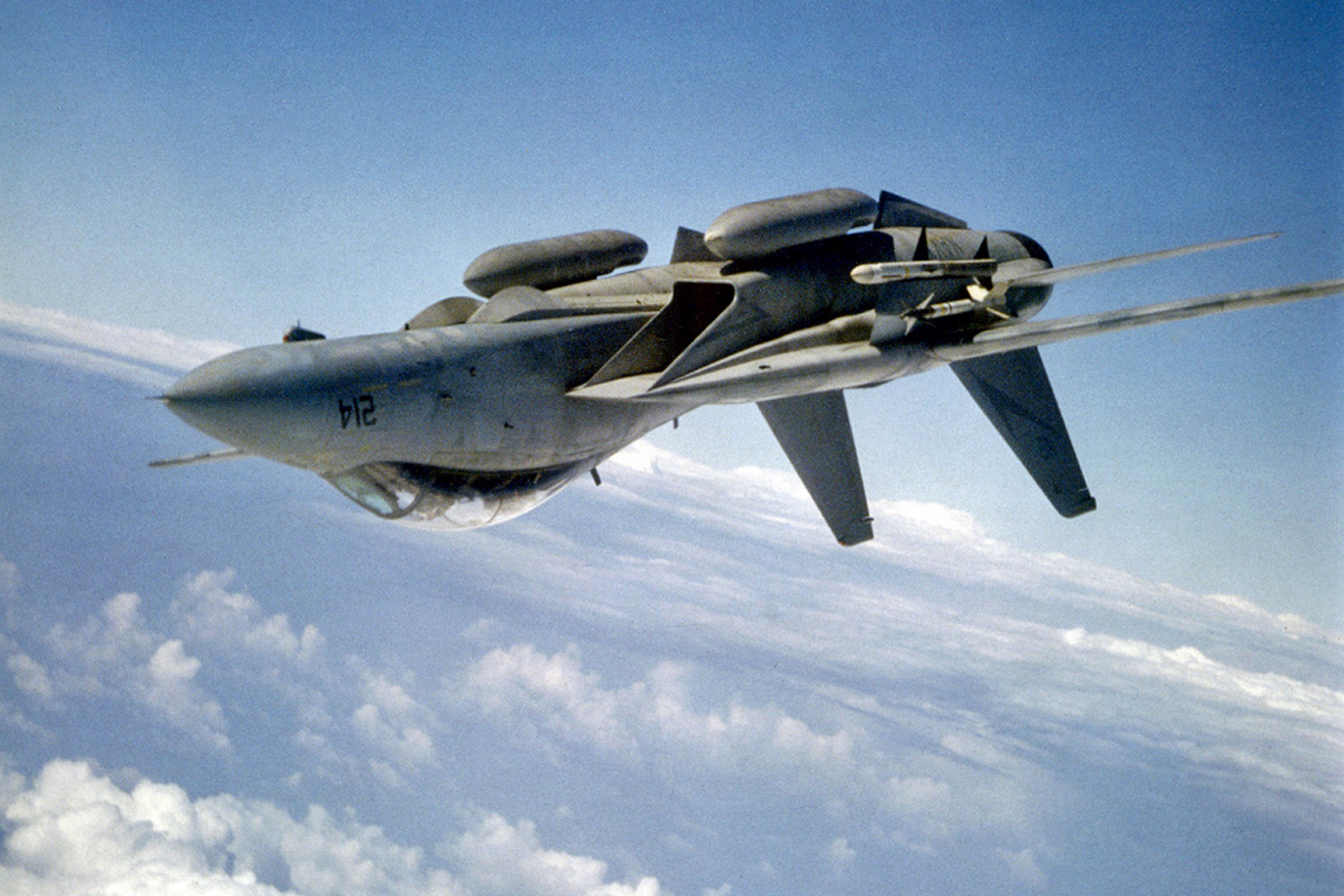 Do you still shoot film?
Sadly, I do not. I think the main reason is that I’ve been concentrating on my writing projects. But I still enjoy scanning the images from the past and working with them using software – does that count? And spending time on Kosmo Foto tempts me to get into it again!