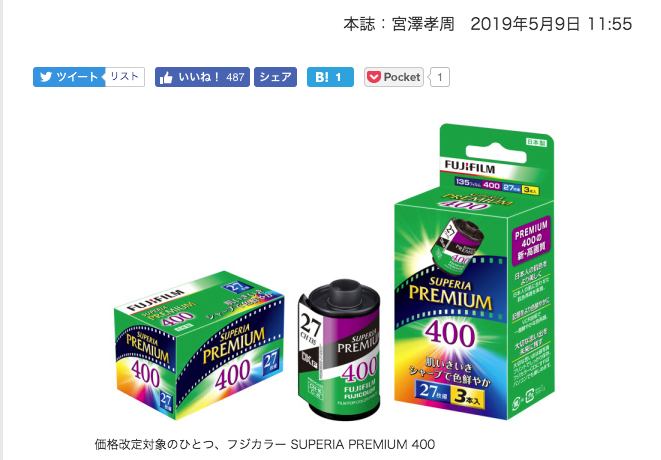 UPDATE: These price rises may in fact be the delayed roll-out of price rises announced in February.

Fujifilm has announced a price rise among its remaining films this summer.

Prices of all films in its range – including Velvia and Provia 100F slide film, Superia print films and Pro negative films – are expected to rise by at least 30% in Japan, according to a report on the Japanese website Impress Watch.

The price rise is expected to take effect from July.

The news was shared by Japan Camera Hunter’s Bellamy Hunt and EMULSIVE on Twitter earlier on Thursday.

The announcement follows a price rise of 30% announced by the Japanese film producer in February, effective 1 April, as earlier reported by Kosmo Foto. Since this story was first published, Kosmo Foto has learned that July’s price rise may in fact be the one which was announced in February and for some reason did not take effect in April.

As Fujifilm’s range of films has reduced over the past few years, prices have regularly been raised, the rises blamed on falling demand and the increased cost of raw materials

There is good news however – none of Fujifilm’s current range are to be discontinued, at least according to this latest announcement.

There wasn’t any price rise in Apr. Looks like they’re postponing the price rise till June (or after June) as per this news.

Hi Trevor – really? I’ll amend if this is the case!

Yes I’ve been looking at prices on Japan shopping sites, and there were no changes in April.

Thanks for that – I’ll update.