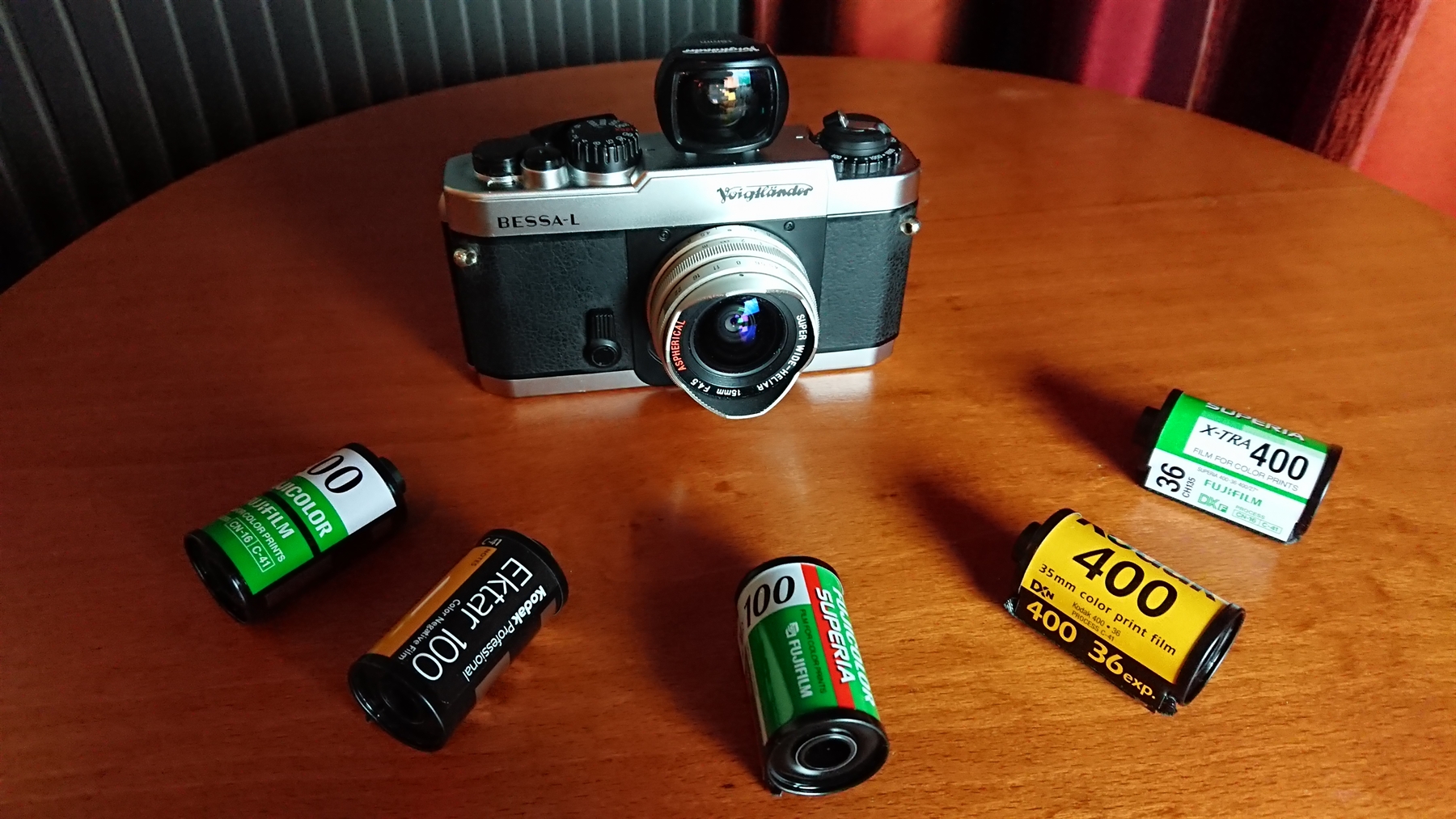 Home Travel Around the World in 80 Cameras ATWI80C 1: Nijmegen on a Voigtlander Bessa-L
KF article top

Nijmegen, the oldest city of the Netherlands, has been situated in a bend of the River Waal for over two thousand years.

Although I was born in Amsterdam, this is the city where I grew up and have lived for almost 50 years now. And although there are not many remains from the Roman times visible anymore, Nijmegen is still full of history.

Emperor Charlemagne, the first emperor since Roman times, had a palace built in Nijmegen. This palace was destroyed by the Vikings but was rebuilt by Emperor Barbarossa some 150 years later. It was destroyed again at the end of the 18th Century because it was then seen as a symbol of feudalism. Some remains are preserved and remind us of the medieval grandeur of this beautiful city.

Over times, the River Waal became more and more important as a trade route and Nijmegen prospered greatly from this. There was trading from the Baltic Sea via Nijmegen into Germany and being an imperial city it did not need to pay taxes on this trade. Nowadays, the River Waal is very important for transport from the Rotterdam North Sea harbour into Germany. When I think about Nijmegen, the first thing that comes to me is its beautiful setting along the river. Approaching Nijmegen from the north gives you a nice view on the riverfront.

Of course, Nijmegen is not only about history. Since 1923 it has had a university and in 1951 a university medical centre was founded. In 1950 Philips started the fabrication of transistors in Nijmegen. This later became an important semiconductor production site (now NXP) and this led to the emergence of a hi-tech industry cluster. Nowadays, most of the production has been moved to Asia, but as a development centre it is still important.

The Second World War had a big impact on Nijmegen. Due to a regretful mistake, an unplanned aerial bombing raid by the United States Army Air Forces destroyed a large part of the historic city centre and killed over 800 people. The Saint-Stephen’s church, one of the most iconic buildings of Nijmegen, was severely damaged. Fortunately, it has been restored after the war. Although more and more tall buildings were erected, it still dominates the Nijmegen skyline.

Nijmegen is a green city (it even won the European Green Capital Award in 2018). Almost all streets are lined with trees and we have plenty of public green areas, even in the historic centre. Internationally, Nijmegen is famous for its “walk of the world”. This international Four Day Marches is the largest multi-day marching event in the world.

There is a lot more to say about “my” city but from the above, you can already imagine that it is a great city for photographers. I started photographing in the early 1970s. A good friend of mine taught me how to develop and print film and soon I had my own darkroom. I received a diploma at the vocational school for photography but I never worked as a professional photographer. During my training as a chemical analyst my interest in the chemical side of photography grew and I gained a lot of practical knowledge during my internship at a manufacturer of printing supplies.

After that I studied photonics and of course in the 1980’s that implied mainly analogue imaging techniques. And although digital imaging slowly gained ground, I always kept analogue photography as a hobby. I do have a 2008 Olympus SP-570 and my Sony mobile phone is more than capable of recording images but for me it is just not appealing enough to switch to digital. It is like the difference between a watercolour and an oil painting, both techniques have their own charm and the one does not rule out the other.

During all those years I accumulated a lot of different cameras, not for collecting but always to take photographs. My most recent purchase is the Voigtlander Bessa L with the famous Heliar Aspheric 15/4.5 wide-angle lens. A colleague once showed me this camera and allowed me to use it. I immediately became hooked and was lucky enough to buy one some nine months ago.

It is not a rangefinder camera. It uses an accessory viewfinder to match the Leica thread-mounted lens. This viewfinder is very bright but it needs some training to keep the camera straight. The body is slim and the wide angle of view means that a firm grip on the camera will leave a finger visible in the image. 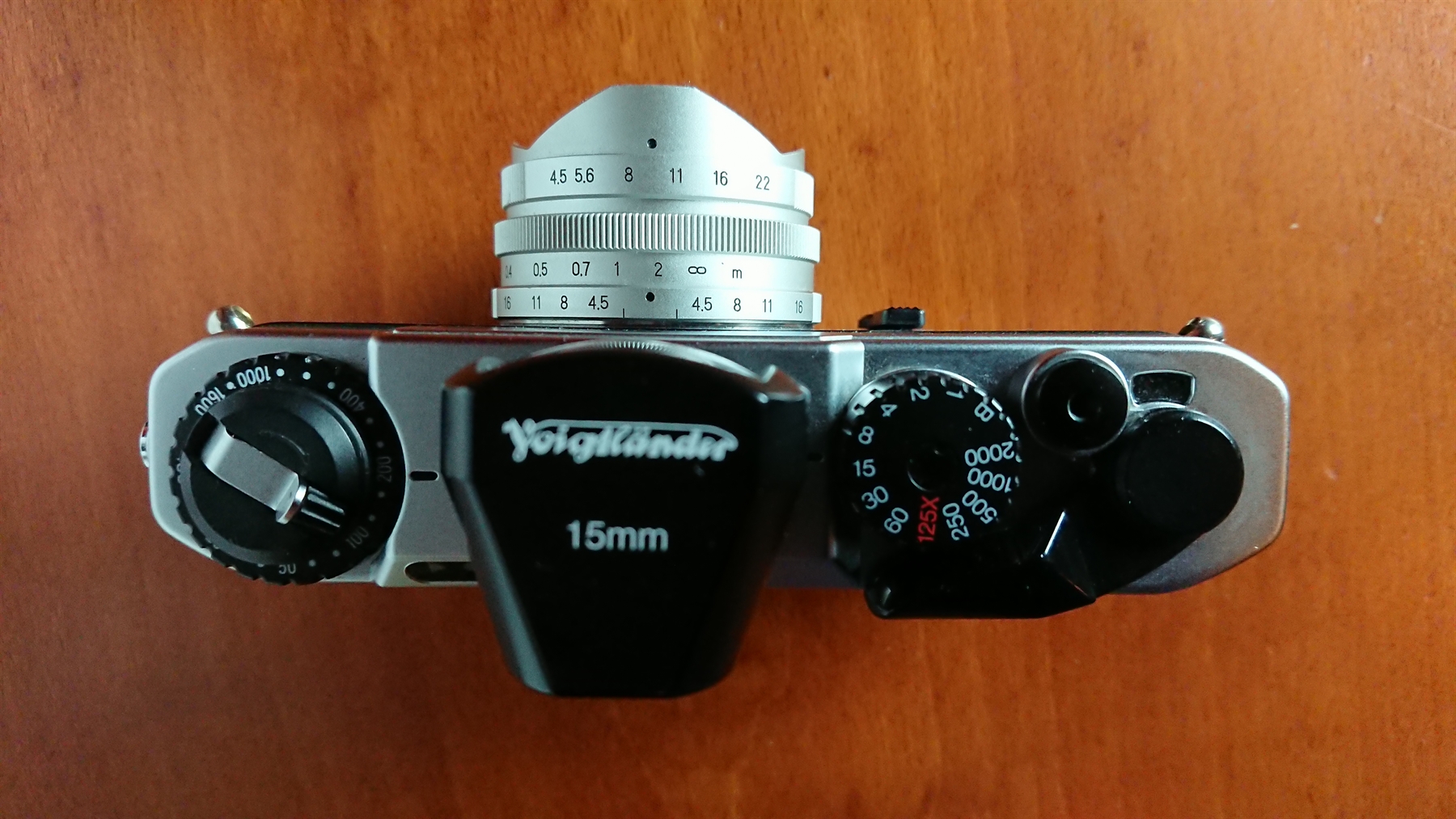 It has a good lightmeter with over- and under- exposure indication. All settings are manual. One slight disadvantage of the slim body is that the travel distance of the film in the body is such that the spacing of the frames is aligned to the perforation instead of between the perforation. This makes it a bit more difficult to sleeve the film stripes in their archival storage sheets. Both my colleague’s camera and my camera suffered from a problem in the winding mechanism. The film did not wrap tight around the spool. The spool slipped and causes the film being lifted off the sprocket wheel. This resulted in overlapping frames.

After a couple of film rolls through the camera, this improved and now I can use all 36 frames on a roll. I used this camera on a trip to Finland and it easily fits in a pocket. I like wide-angle photography and I use the 24mm on my Canon and the 40mm on my Hasselblad a lot, but this 15 mm is entirely different.

Photographing Nijmegen for this project with this camera proved to be a bigger challenge than I first thought, but it is a lot of fun and certainly helped me to obtain a fresh look at my city. January proved to be an exceptionally dull and rainy month and therefore I decided to use colour film instead of black and white. I developed the majority of the colour films in Bellini’s C41 Mono Bath chemistry. I find this much more convenient than the Tetenal Colortec kit I used previously for colour film.

After processing, the negatives were scanned using an Epson V700 scanner. I try to capture an image as it is and I seldom use post processing other than for cropping and blemish removal. 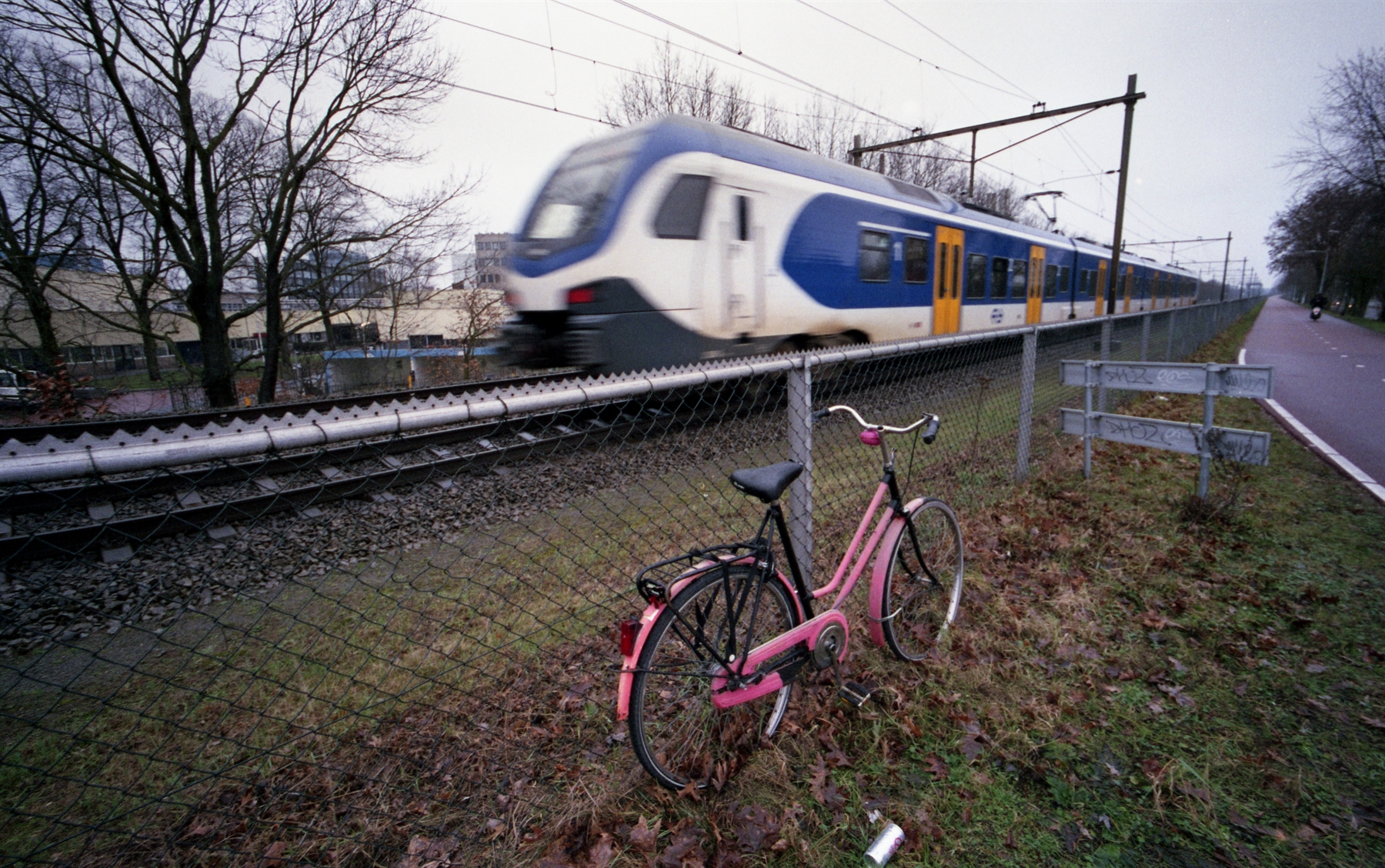 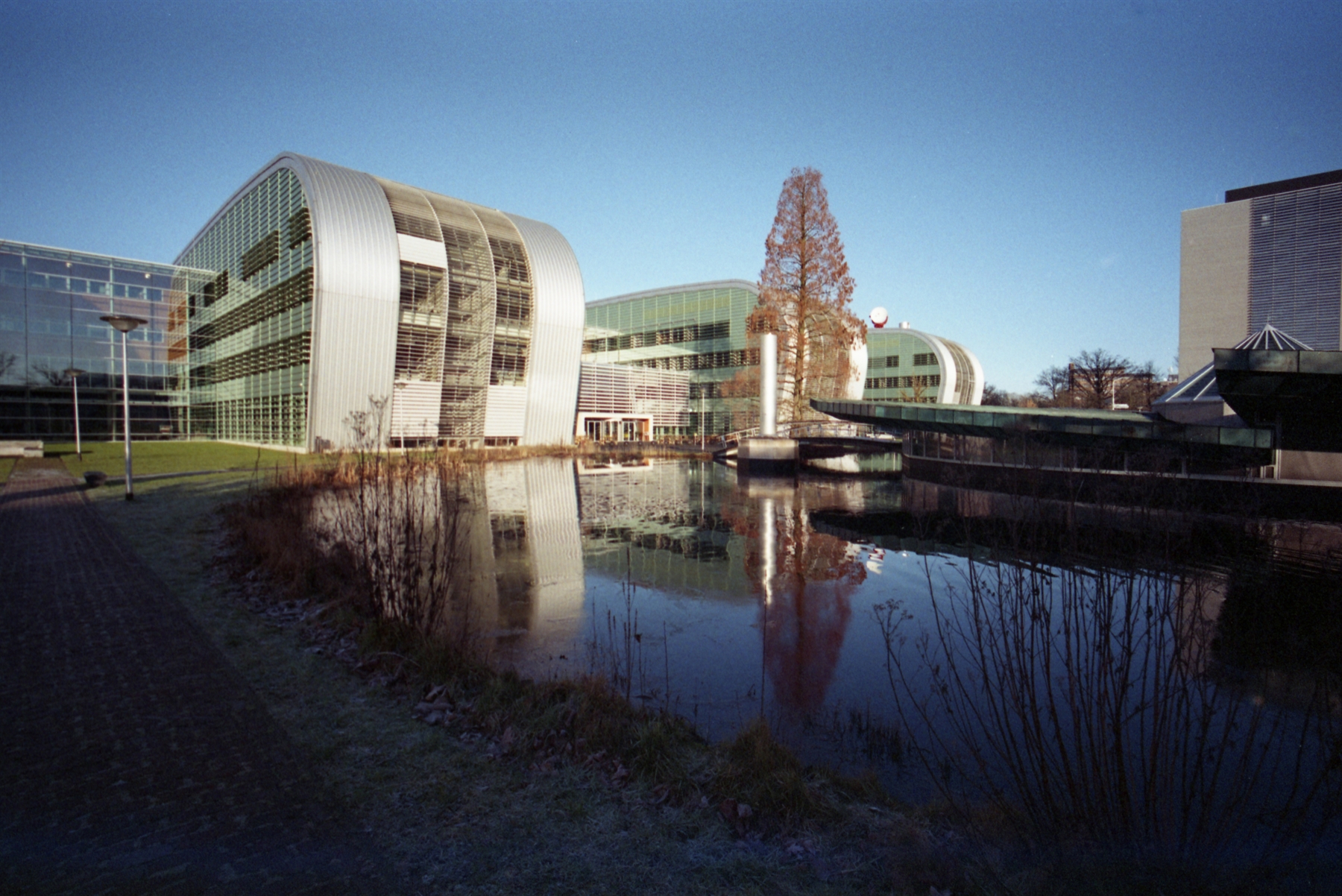 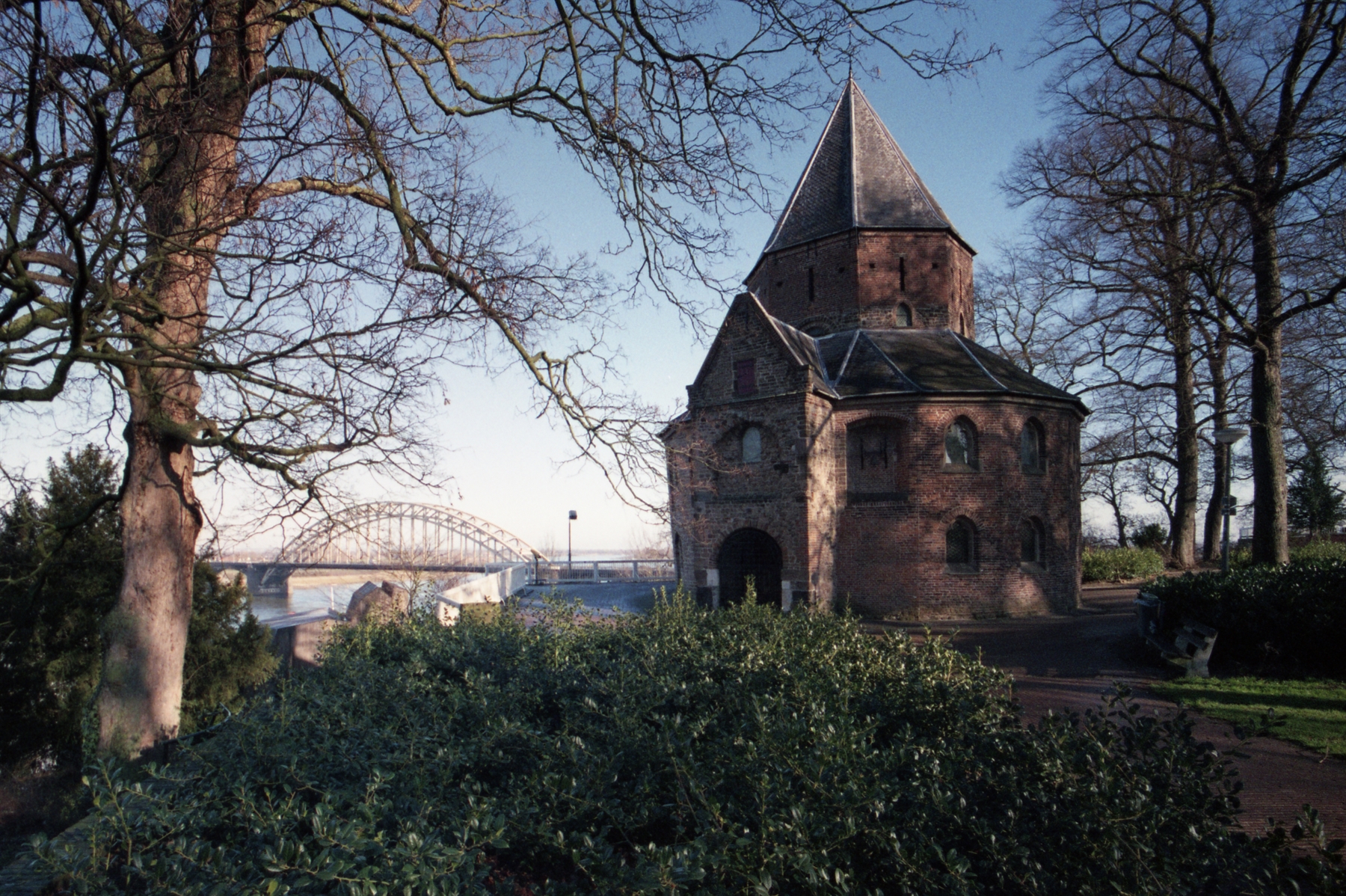 Great article! Enjoyed the rundown on the city, now I have a new place I want to visit. Great shots, too.