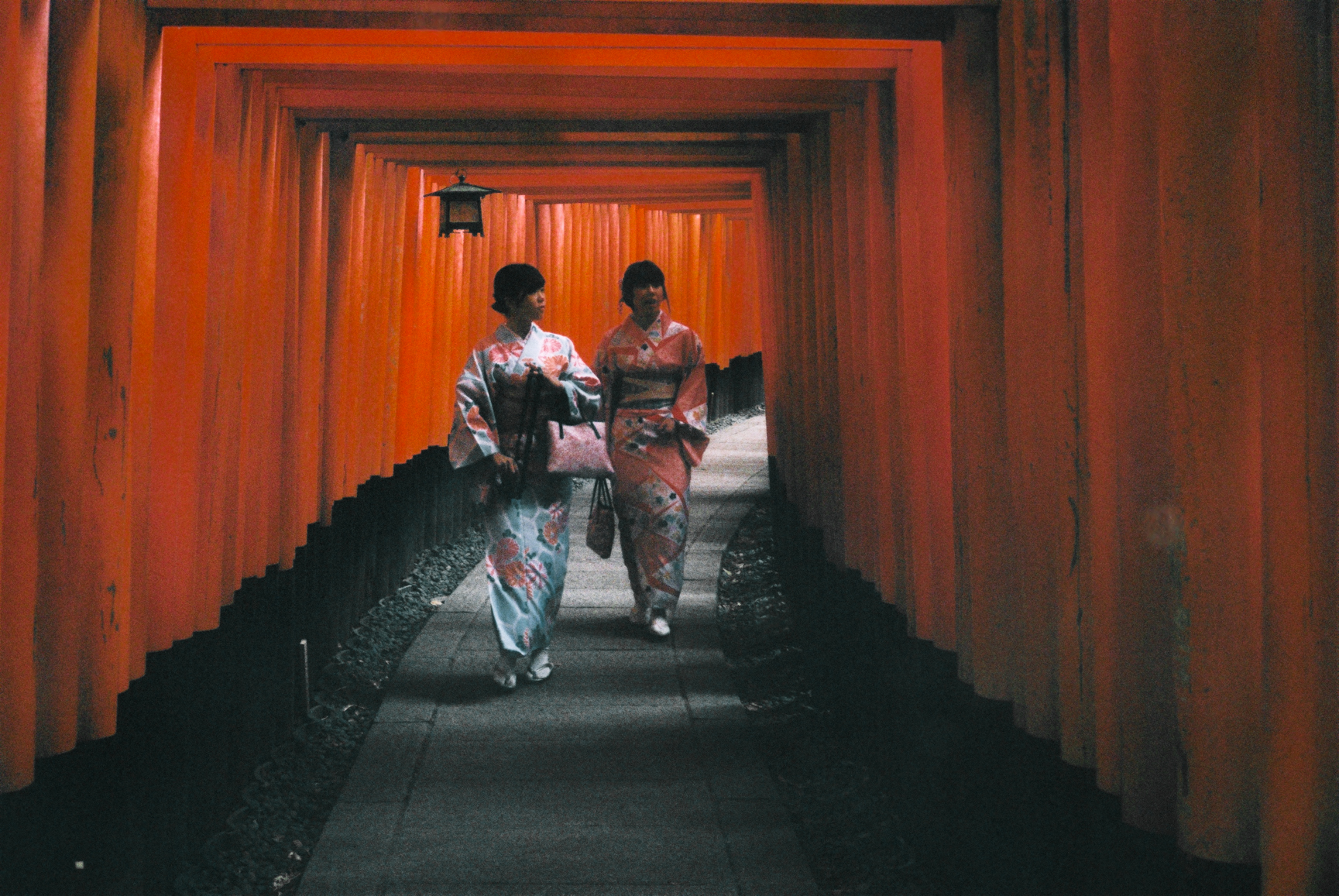 Home Travel Around the World in 80 Cameras ATWI80C 10: Kyoto on a Ricoh Mate
KF article top

Talking about a city like Kyoto without repeating what has been already said, or showing what has already been seen is a very challenging task. It is, after all, one the most visited and photographed cities in the world. I lived in Kyoto for several years from 2014, where I worked as a researcher in the field of neurobiology.

I have been passionate about photography for as long as I can remember; analogue first, then digital. In the last few years here in Kyoto my interest in analogue photography awoke again, and I discovered a newfound passion for 60’s rangefinders and how to repair them. I came across several old camera shops in Kyoto and found myself roaming in; initially like people do in museums and afterwards, when my interest moved also to the mechanical side of the “writing with light” process, with the ravenous attitude of those looking for junk cameras to repair.

I see Kyoto as a slow city, to be discovered on foot or by bike, perfect then for an analogue approach to photography. In the last few years I have been spending every work-free moment looking for hidden corners of the city, trying to understand architecture, people and the relationship between the two.

It’s well known – and almost a stereotype now – that Japanese people are difficult to interact with. Kyoto especially, with regards to social relationships, has a tinge of human austerity maybe dating back to the ancient glory of being the old Empire capital city: a title that Kyoto seems to have never really lost. Japan opened itself relatively late to the western world, after the “dramatic arrival of US Commodore Perry in 1853” as described by Christopher Goto-Jones in his book ‘Modern Japan: A Very Short Introduction’. Nonetheless, it’s like Kyoto never really embraced this, and it considers foreigners merely as millions of tourists who visit the city every year: Kyoto watches them with a profound detachment.

The perception that Kyotoites are difficult people to interact with is common even among Japanese people. Osaka is 80km away from Kyoto and it’s not really physically separated from it, given the vast human colonisation of highways and houses; still, people from Osaka see Kyotoites as “odd Japanese”, maybe again due to that hard cultural setting that makes people from Kyoto so difficult to build a social link with, beyond simple courtesy. Although four years had already passed when I wrote this, I kept living in Kyoto without any real emotional bond with the Kyotoites.

Unlike its inhabitants, Kyoto is easier to explore and maybe even easier to understand and appreciate. It is a clean and safe city, full of architectural hidden gems, perfectly harmonised with the surrounding nature. It is incredibly easy to fall in love with Kyoto in springtime: that’s when the cherry trees are blooming and the water from the various sized canals, tributaries of the main river Kamogawa, appears white and pink due to the falling petals. Kitano Tenmangu, Kyoto-gosho, and Tetsugaku-no-Michi or “Philosopher’s Path” are among my favourite destinations in this time of the year. This is also the moment in which Japanese people allow themselves to rest under the blooming cherry trees’ shade, activity named “hanami” (flower viewing”).

One of Kyotoites’ favourite places for this special activity is most probably along river Kamogawa’s embankments. A “hanami” north of demachiyanagi, a bicycle ride around the big Heian shrine, a trip to Nishiki market to admire the huge variety of fresh fish and to taste hot soya milk doughnuts and finally a delicious dinner at Goya, the Okinawan/Asian style restaurant: that’s how I would describe one of my perfect spring days in Kyoto.

It is incredibly easy to fall in love with Kyoto in autumn, when the city and its mountains gradually change their colour from green to yellow and then, around the end of November, rapidly to red. Several temples, women wearing traditional clothes (mainly Chinese tourists or Asian girls on study trips in the city) and the red maple leaves all contribute in creating a special and unique atmosphere.

Must-dos in this season: long and slow walks enjoying the Shinsho Gokurakuji (Shinnyodo) Temple, Eikando and the wonderful Nazen-ji; a road trip outside the city to visit the rural village of Ohara and the beautiful Jakko-in Temple; taste the various combinations of gyōza at Tiger Gyōza Kawaramachi and have at least a beer with the photographer Kai Fusayoshi in his own bar Hachimonjiya where, apart from being able to browse and potentially buy one of his many photography books, visitors can even get into vibrant and fiery discussions on civil rights and fights against social inequalities.

It is incredibly easy to fall in love with Kyoto in winter, when the snow covers the roofs of the Buddhist sanctuaries (jinja) scattered in the woods around the city, and the snowflakes fall slowly on the temples’ dark wood pagodas. The freezing waters of the Kamogawa river and the calm and icy-cold wind invite people to warm themselves up with a coffee in one of the several cafés in the city; even better if this comes from Tsubame, near Keibunsha Ichijoji shop, the seventh-most-beautiful bookshop in the world according to The Guardian.

From there, Ichijoji is only few steps away: it is considered the best ramen street and, also due to the very cold temperature, it is the best moment of the year to taste at least a ramen in any shop of the area. My favourite is Yuhi no Kirameki.

It is, perhaps, a bit less easy to fall in love with Kyoto in summer although, funnily enough, it seems to be the season that Kyotoites prefer the most. It is a very hot and rainy season. I don’t like Kyoto’s summer much. However, a pleasant activity in the evening could be an icy cold beer on one of the wooden planks built in this season on the Kamogawa, between Gion and Sanjo Bridge: this is not only one of the oldest bridges in the city, but also the gathering point for nightlife every weekend. 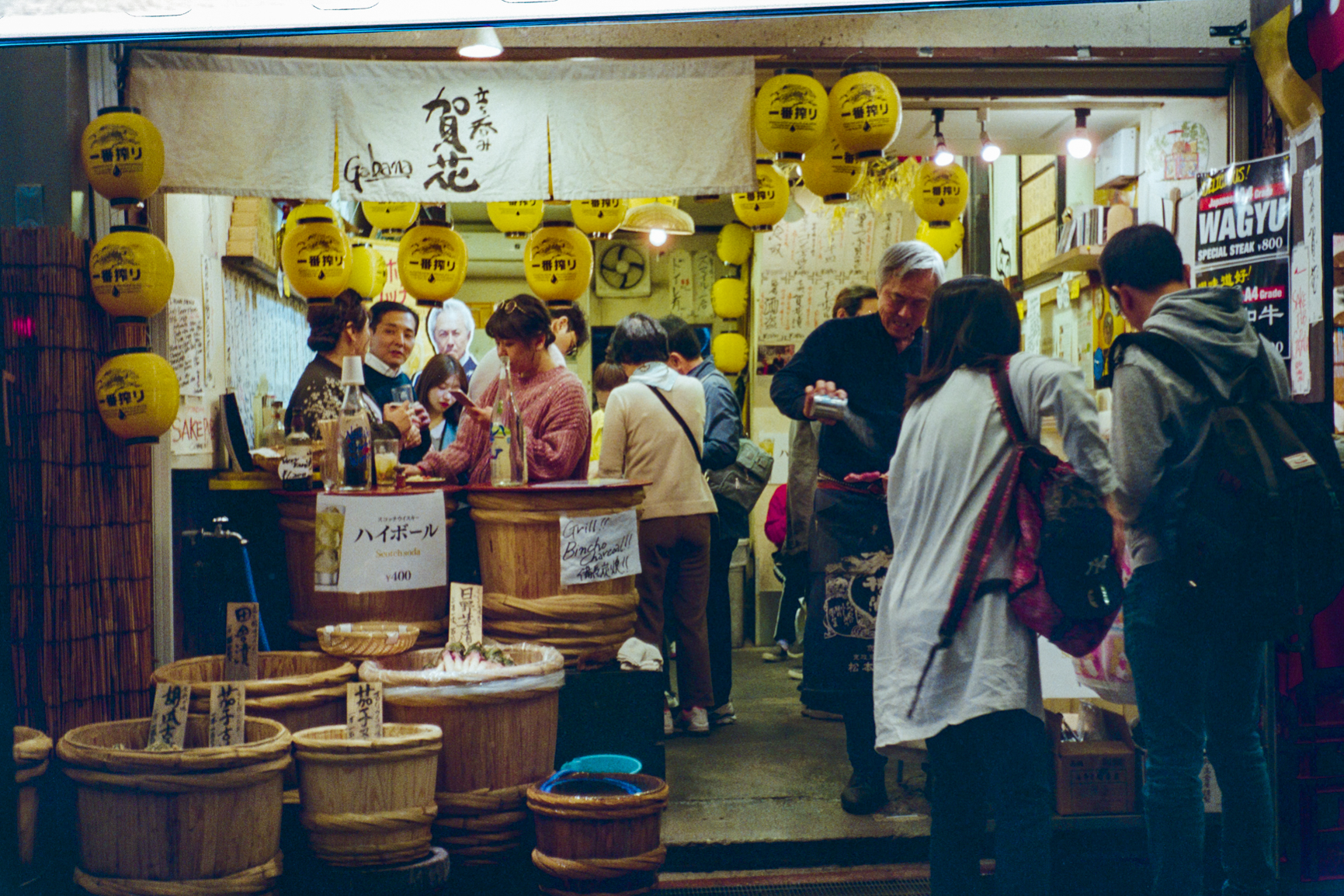 Kyoto is swarmed over by tourists throughout most of the year, so it’s pretty difficult to find a peaceful corner that hasn’t been walked over, photographed and somehow worn out by hundreds of visitors. Nevertheless, all this doesn’t diminish either Kyoto’s peculiar charm or my wish to continue exploring it.

The Ricoh Mate, meanwhile, is a 35mm rangefinder film camera released by Ricoh in 1960. There is no built-in exposure meter; exposure is performed by shutter and aperture rings surrounding the not interchangeable 45mm f/2.8 lens. The shutter is manufactured by Seiko with speeds of up to 1/500 of a second.

The experience of shooting with the Ricoh Mate is nothing particularly exciting and I admit that there are tons of better rangefinders out there, but this camera is very special to me as it is the first I tried to repair. I found it in a junk box in Kyoto a few years ago and since then my curiosity and passion for old rangefinder cameras has grown bigger and bigger.

The lens is pretty sharp and the focusing ring easy to use with a very bright finder.  I don’t consider this camera fast to use especially for street photography: setting-wise, I found the aperture and shutter levels very small. I heard that the Ricoh design was not well accepted by the market at the time of its launch, but personally I think it’s pretty nice.

Overall, the Ricoh Mate is a very solid “tank-like” camera to carry around and if you happen to find one (which I believe is quite hard, especially in Europe) it is absolutely worth giving a try.

Wow! What a great description of this city. The pictures definitely give a feeling for the city as well.

I loved Kyoto too, for a visit. I lived much further North in Ibaraki. I found it much friendlier. The cameras in second hand stores were much cheaper too. I recommend a trip to Nikko if you can.