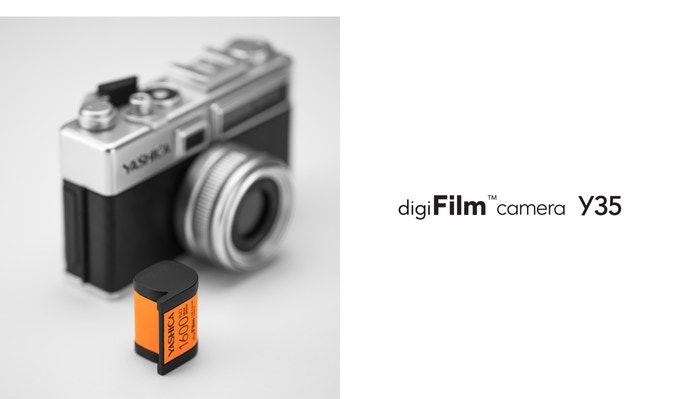 The new camera – called the Yashica Y35 – was unveiled on Kickstarter on Tuesday.

The camera, which bears a resemblance to some of Yashica’s rangefinders such as the Minister and the Electro 35, can be loaded with different varieties of the digital ‘film’.

The camera is shipping with four different kids of digiFilms – ISO 200 colour, ISO 400 black and white., ISO 1600 colour and a colour square format optimised for Instagram. The digiFilms are in fact jpg presets that work with the camera’s sensor to produce particular results – just like a roll of film.

The resulting pictures will not be rivalling those from a full-frame digi SLR however – the camera’s sensor is capable of 14 megapixels.

The Kickstarter is aiming to raise just over $100,000 in 40 days and had already reached nearly half that amount in the first few hours.

“We develop different “digiFilm” with its unique style and distinct effect,” read a statement on the Kickstarter. “Designed for high quality images of different style such as ISO 1600 High Speed, ISO 400 Black & White, 120 format of 6×6 images and ISO 200 Ultra Fine. What’s more…? Lot of different digiFilms are coming to give photographers more opportunities to experiment and create beautiful images in different styles.

“Using YASHICA Y35 is a journey to the truth—there is no instant gratification of a review screen, no delete button, and no hiding from mistakes. The world seen from the viewfinder of Y35, might be a little slower, a little prettier, transporting us back to a time when we all pay a little bit more attention, and causing us to care each shot before clicking the shutter – because it must solid the first tie or the moment is lost. Every Y35 image is real, carefully captured in its true moment.”

The camera’s specifications are as follows:

If the Kickstarter is successful the camera are expected to be sent to customers in April 2018.

Yashica was a major Japanese film camera manufacturer which produced a range of 35mm and 120 film cameras, including the cult Electo 35 rangefinder family and Yashicamat medium format cameras.

Yashica was bought by Konica/Minolta in 2003 and camera production was stopped two years later.

So let me get this straight. They are making a digital camera that mimic’s film? A novelty that is sure to pass quickly. Shoot film, shoot digital, or, shoot both, but, don’t pretend to shoot film.

So it’s not a film camera. A shame.