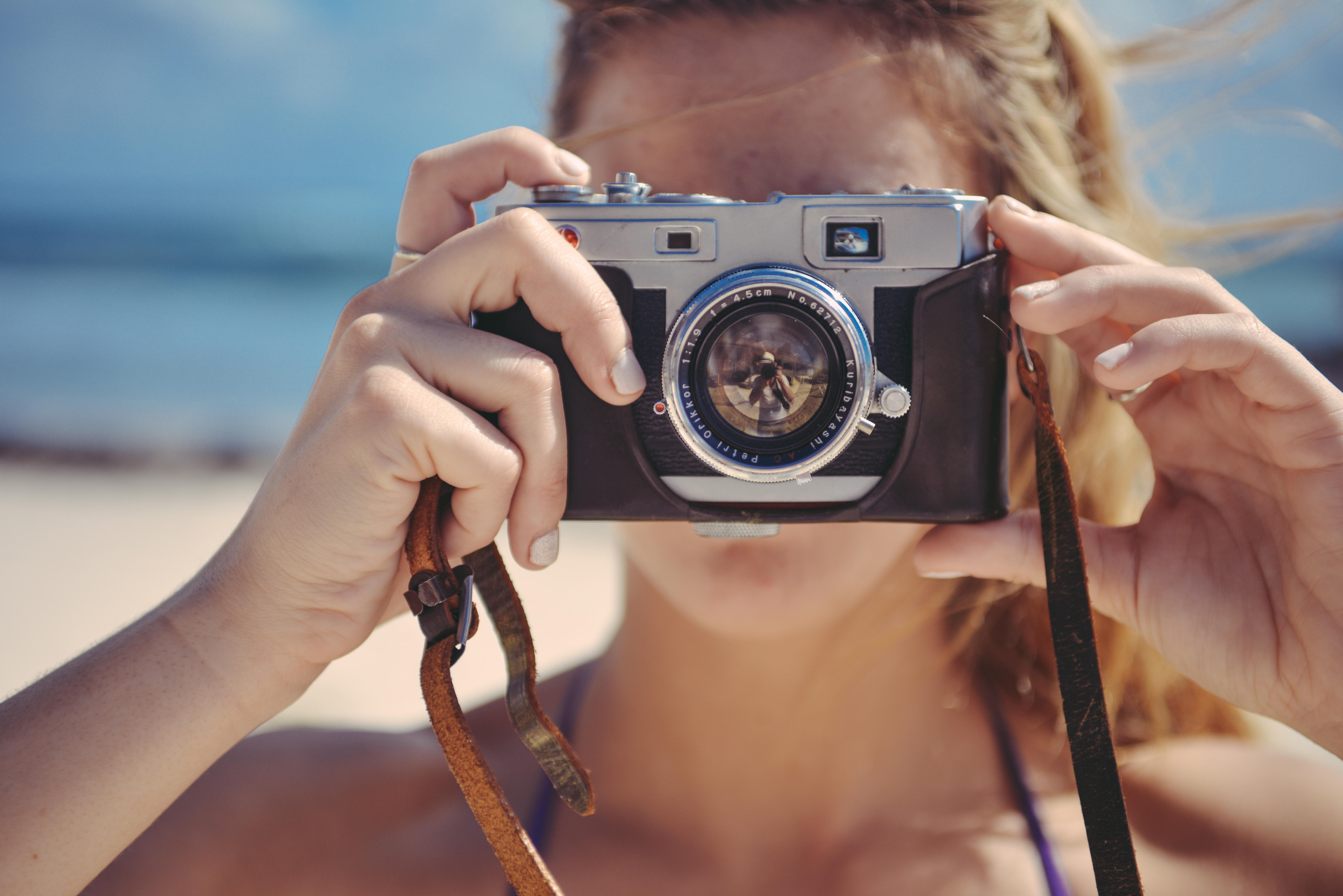 Home LOMOgraphy Why are there so many film cameras in adverts?
KF article top

The geography doesn’t matter. You’ll have seen it, even if you’ve not consciously taken it in.

And, chances are, now that you’ve read it you’ll notice it a lot more.

In the UK, it came to a crux for me for eBay’s latest TV ad, doing the rounds on the ad-funded terrestrial channels and the bigger digital ones. The dizzying array of things flashing up one by one (and only a bid away on eBay, folks!) lingers longest on a mint-looking Canon AE-1, a favourite camera for many turning to film the first time or returning from a digital detour.

From an HSBC ad where a grandfather shows his grandaughter a secret compartment – with a shelf full of film cameras to underline grandad’s old-school wisdom – to a New Zealand tourism board ad showing a young couple exploring the Kiwi outdoors with a 1950s style camera at the ready, TV ads have been propagating an aura of authenticity around film cameras for more than a decade.

This was, of course, around the time people were ditching film for the convenience of digital.

All ads are trying to create an environment that is attractive, one that makes you want to buy their product. At their simplest they are billboards that pronounce their product will be cheaper or more long-lasting than their rivals. But that’s not enough any more. We have become sophisticated fools – we want them to build us something full of emotion and feeling before we hand over our cash.

I have met a few creative directors here and they all seem to be film photographers – Bellamy Hunt, Japan Camera Hunter

Film cameras have become one of the signifiers of a creative aura that brands are very keen on. If your product is aimed fairly and squarely at the creative class – young, educated, and with a high disposable income – then you have a tried-and-trusted array of objects that help you underline authenticity, says Simon Whitehead, a British advertising creative director at BPDS London.

“I think there has been a noticeable shift in advertising towards ‘retro’ styling in the past decade,” he says. “In particular, the use of products that are mechanical, hand-finished and use natural materials – this may well be a natural reaction to the Jony Ive school of product design, where everything is so minimal, so clean and so soulless. Film cameras (and record players and hand-finished calf-skin iPhone cases etc) immediately hark back to the days of high-quality, precision products and using them in today’s advertising maybe lends a feel of sophistication, aspiration and uniqueness to an otherwise dull, uninspired, technology-led product.”

Whitehead adds that throwing a film camera into the mix is an attempt to add “uniqueness, precision, quality and the ‘human touch'”.

Bellamy Hunt, who runs the blog and photography business Japan Camera Hunter, is another one who has noticed the trend.

“A few years ago it started to become apparent. I started to share some of them on Instagram etc and people pointed out they were seeing them too.

“There are a lot of Japanese ads with classic cameras in them. I have met a few creative directors here and they all seem to be film photographers. So they always have a camera in their bag that they can use for a prop.”

That may have something to do with it. Many creative directors are consciously propagating the kind of ‘authentic’ lifestyle that we’re seeing in the ads. They might buy vintage clothes rather than things off the rack in high-street chains; they might have a collection of vinyl alongside their Spotify account. And they might have a Leica, or a canon AE-1, or a Zenit E sitting on a shelf – an object of statement, even if they don’t shoot film on it.

“I think it is a combination of aesthetic and that that a lot of creative directors/photographers have a film camera lying about the studio,” says Hunt.

“I think the decision makers of my generation who are now Creative Directors etc are looking to their past and trying to re-use imagery and themes in an attempt to add life and soul to bland modern products,” Whitehead adds.

There are a lot of print/online ads that also use film cameras as part of their visual language – aligning what they’re selling as being part of an identifiable culture. It’s a trope that springs up time and again – especially in the travel industry. A film camera will be one of those accessories – alongside a bespoke leather passport holder and retro airline tickets – making up a tableau of the ‘real’ experiences waiting at the other end of a click. This may seem all the more ironic given that these days, a ticket is likely to be on our phone, the same phone that will take all our photos when we get to our destination.

But is this meaning a new generation are seeing all these film cameras in print and on TV and suddenly hankering for a Spotmatic or a Leica? “Perhaps,” says Hunt, “though I think it really is a case of us camera geeks noticing them. I think a lot of people who look at the ads just see a generic camera.

“There might be some knock-on effect, though I am unsure. I think that when a film camera gets used by a celeb it definitely has an effect.”

Camera geeks will still be heartened by the sight of this ‘analogue’ tech in the mainstream. Last year, British photography blog Phogotraphy ran a post on a new ad campaign for bank Santander, saying: “Buy a film camera. Spend your monthly fee on film.”

But there’s a cautionary note here too. It’s all very well adding a film camera to your advert for that all-important authenticity – just make sure everyone knows what they’re actually dealing with.

“I saw an ad one in Chicago for H&M,” says Hunt. “The model was holding a Leica M3 as if he was looking at the screen on the back.”

Have you noticed it too? Tell us more in the comments below.