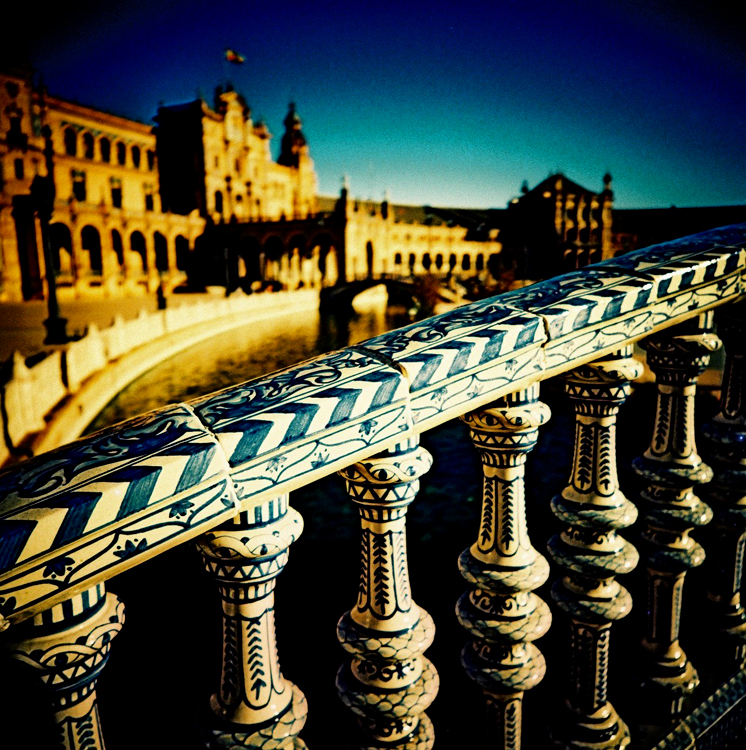 Seville has been on my list of cities to visit for some time. When I’ve asked people what their favourite European cities it regularly appears near the top of their lists.

In November, while northern Europe begins to shiver through the beginning of a months-long stretch of afternoon sunsets and rain-soaked weekends, Seville still basks in sunshine. It’s a city rich in Moorish history, boasts the biggest cathedral in the world, and is famed as the city that invented tapas (and is home to Cruzcampo beer). What’s not to like?

Packed into my camera bag for this short trip was a camera that’s fast becoming one of my must-have travel cameras, the Lomo LC-A 120.

I’ve blogged several times about the LC-A 120 since Lomography UK loaned me one at the end of 2014. Having used a 35mm Lomo since 2000, I’m used to the Lomo’s strengths and weaknesses, and how it’s vignetting, saturating lens makes the most out of cross-processed slide. I’ve already taken one with me on trips to Malta and Istanbul, and loved using it to capture wide-angle street shots. Though it takes medium format film, the LC-A 120 is a light and portable camera, and its characteristic Lomo lens adds dramatic contrast.

Having packed low ISO film to make the most of Seville’s sunshine, I tended not to shoot much indoors; even though the LC-A 120 doesn’t have the mirror slap of an SLR, you’ll still need unnaturally steady hands or a tripod to capture the likes of Seville Cathedral on 100-speed film. Far better was to pad Seville’s winding Old Town streets.

Some of the best shots on this trip were taken at the sprawling Plaza de Espana, a huge, grand plaza in the Mary Luisa Park on the edge of the city’s Old Town. It was built for an expo in 1929 to promote both Spain and the Spanish-speaking countries of America; the timing could not have been worse. The enormous building costs came just in time for the Great Depression and almost bankrupted the city.

It includes tiled mosaics celebrating each of Spain’s provinces. The giant, baroque central building glowers over a boating lake that boasts four ornate bridges, one for each of the four ancient Spanish kingdoms.

The combination of bright, late afternoon light and cross-processed Kodak slide film was perfect. The film’s long-expired, but still perfectly useable; the shot below, of the fountain catching the sun’s rays, looks like a decades-old early colour shot, warped and weird.

The Lomo’s quiet shutter makes it good for quiet street shooting; I snapped a few pics in a bar waiting for the Seville/Real Madrid match, and no-one noticed.

Next up? The LC-A 120’s coming with me on a month back my home country of New Zealand. I can’t wait to see how it captures that bright Southern Sun, and some of the familiar sights of home.

Check out more pics below, or on my Flickr set.

There’s a lovely rich velvety darkness to the colours of the strong Spanish sunshine thanks to the Lomo. Looking forward to the NZ set.

Much obliged, good sir. Am going to be shooting a LOT of film when I’m there.

I like your Plaza de España photos. Much more moody than mine!

Thank you Eduardo – it’s a beautiful place. Perfect on a sunny day.

I almost don’t like to admit that I’m not a huge Lomo fan, because those cameras obviously bring so much joy to so many. But no matter; I love these shots. They’re wonderful. Especially the ones of the bridge and its railing.

Many thanks Jim. Come on… tracks down some old Agfa Precisa/Kodak Elite Chrome, get a Lomo and dip your toes in the water… 😉