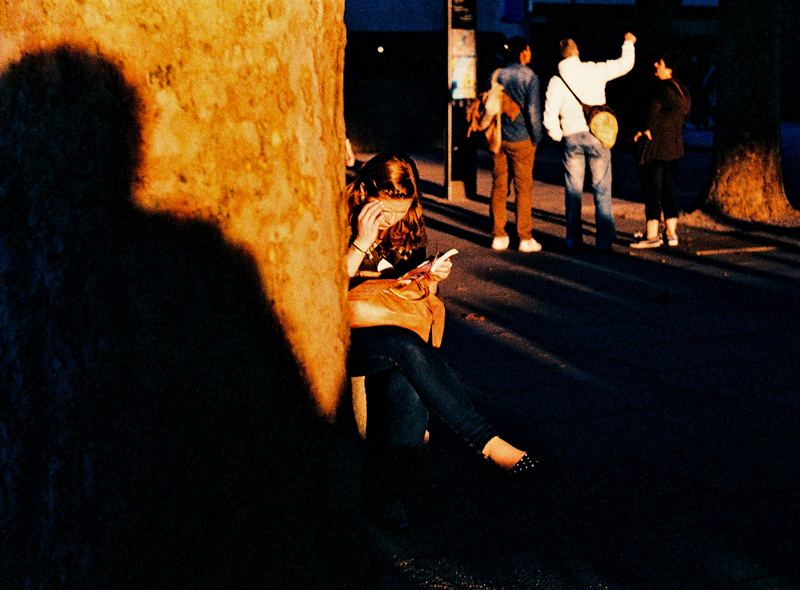 Photographic film is an odd beast; strips of plastic, layered with gelatine emulsions peppered with silver salts. Its sensitivity to light means accidental exposure can ruin it in a split second. It doesn’t like heat. Sitting on a shelf in a camera store or chemist, it is constantly slowly degrading, losing structure and quality. Like spoiling food, film erodes with every minute of every passing day.

The received wisdom is to pay attention to the use-by date on a roll of film, and shoot and develop it well within expiration; if you’re shooting on pro-level films, this ensures that a uniform look – and quality – is maintained.

But film doesn’t become useless as soon as the clock ticks past the expiry date. Some films can last years – even decades – past their intended use by date, as long as they’re carefully stored. The problem is heat and radiation; that tiny but constant dose will eventually turn film into a fogged mess.

And even with that degradation, that slow collapse, expired film can still take fantastic pictures. Colour shifts and lack of sharpness can elevate some shots from ordinary to surreal. Sometimes using film in perfect working order isn’t the best option at all. There is excellence in the expired.

I first got into film photography back in 2000, towards the end of a golden age of film production. Camera shops heaved with dozens of different film types; Kodak Elite Chrome and Royal Gold, Agfa Precisa and Optima, Fuji Astia, Scotch Chrome and Ferrania Solaris. Each of these films had its own characteristics, its own colour palette or grain structure.

Fifteen years later, most of those names have faded away into obscurity, discontinued amid the rise of digital and the falling fortunes of film. The last decade has been particularly cruel.

But even now, a lot of those films can still be found. Ebay is the world’s greatest bargain box of old films (even if many of them aren’t exactly being sold at bargain basement prices), many of them a decade more out of date. Buying expired film might seem like a mug’s game, but it all depends on what you want to use it for. If you’re tempted, there’s a few things to remember.

Expired film can create unique photographs: No two rolls of expired film are ever quite the same; each degrades and warps differently. I have shot on rolls 15 years out of date that still take sharp, saturated photos, and used rolls only a couple of years past their sell-by date that are next to useless. The only way to find out is to shoot a roll and see.

Some lose saturation as they age, some are more prone to colours bleeding, or a colour mask emerging in the background. Last year, I shot a roll of Kodak Ektacolor 100 film that had expired way back in 1997. It cost me less than three lira (about 80p) and I shot it exploring the backstreets of the traditional neighbourhood of Balat and the bustling commuter hub of Eminonu on an old Soviet Lubitel TLR. The colour had a purple bias; there’s a magenta tinge that’s emerged in the background, like in this picture of a girl snapped on a tram heading into Eminonu below. Those faded, slightly surreal colours help add a sense of timelessness. Was this taken in 2014 or 1970? This is part of the reason for shooting film, revelling in the sheer variety of what you can shoot with.

Keep it cool: The first and foremost thing to do with expired film is to keep it cool. Sticking film in the fridge – or, even better, the freezer – slows down the degradation. Depending on your cold storage, this can extend the film’s useful life from a few more years to decades. My freezer is crammed with about 300 rolls of film, most of them at least eight years past their expiration date. They can probably survive another decade if they’re left in the freezer. And with every passing year there will be fewer and fewer of these films available to shoot on. They are like one-off time capsules, capturing their unique characteristics.

Limit the amount it travels: I travel as often as I can – last year that included trips to Paris, Barcelona, Morocco, Romania, Belgium and Holland and Istanbul. On every trip I bought three or four cameras and enough films to keep me going til the end of the trip. On each trip that included expired film; Agfa Optima 100 for sunny days; Agfa Precisa CT100 for cross-processing; Kodak Ektachrome for that National Geographic look. All of them have turned out just fine, despite the extra doses of radiation they’ve received from airport x-ray machines. But given enough of these boarding-queue doses, they’ll become useless – expired film is much more sensitive to this than fresh film. If any of these expired films are unshot at the end of the trip, they get put in the fridge to be used as soon as possible, and they don’t go through an x-ray machine again.

Experiment with xproing: The best slide films for cross-processing are discontinued – Agfa’s peerless Precisa CT100 and Kodak Elite Chrome 100. Both helped create the LOMO craze in the 1990s, the humble LC-A creating bold and dramatic photos thanks to the rich blues and reds. If you can find these films – an excellent tip here on how to recognise the original Precisa from the rebadged Fuji Slide you can still buy under the Precisa name – they cry out for cross-processing. Firstly, because they remain the best films for this kind of processing, and secondly because the degradation that comes from film ageing can actually boost the atmosphere, grain and colour warping of cross-processing.

Seek bright conditions: Just like cross-processing, expired film will need plenty of light for the best results. The higher the ISO of the film, the faster the degradation; a roll of 100-speed film is going to be stable for far longer than a roll of 800. Bear that in mind if you plan to use expired film and push it; colours and contrast will be affected and grain boosted. This isn’t always a problem, but at least be aware that it’s probable rather than possible.

I was gifted several rolls of expired Kodak Gold 200. I just got the first roll back from the processor. Many of the shots were unusable, but the ones that worked had a wonderful industrial cold and hard texture to them. I posted two on my website. Great stuff. I wonder what the next rolls will provide?

Hi Tim
may I ask, where did you go to get your film processed? I can’t seem to find anywhere that will develop a colour 120 film I have from 1974
kind regards
Sarah

sorry, I should have said I can find them but the cheapest so far is £40!

I’ve had some problems with negative density in my last one or two expired film rolls that I’ve shot, had a scanning line across half the roll. I think I’m going to wait on the rest of my stock until I have my own scanner.

I have very recently decided to get into shooting expired colour film, after reading this I’m super excited about what results I’ll be getting.

I know it’s impossible to be exact, but from your experience do you have any suggestions for how much extra exposure to add to old films?

Great ! Not to mention that it could be converted to B&W where colors does not matter 🙂

I used to shoot with expired films belore digital photography, that was i trick my father (photographer) passed me. Try to find a Kodachrome 64 its amazing …believe me!!!

I used to shoot with expired films belore digital photography, that was i trick my father (photographer) passed me. Try to find a Kodachrome 64 its amazing …believe me!!!

© All material copyright Kosmo Foto except where explicitly stated. No part of this website can be reproduced without written permission.
wpDiscuz
12
0
Would love your thoughts, please comment.x
()
x
| Reply