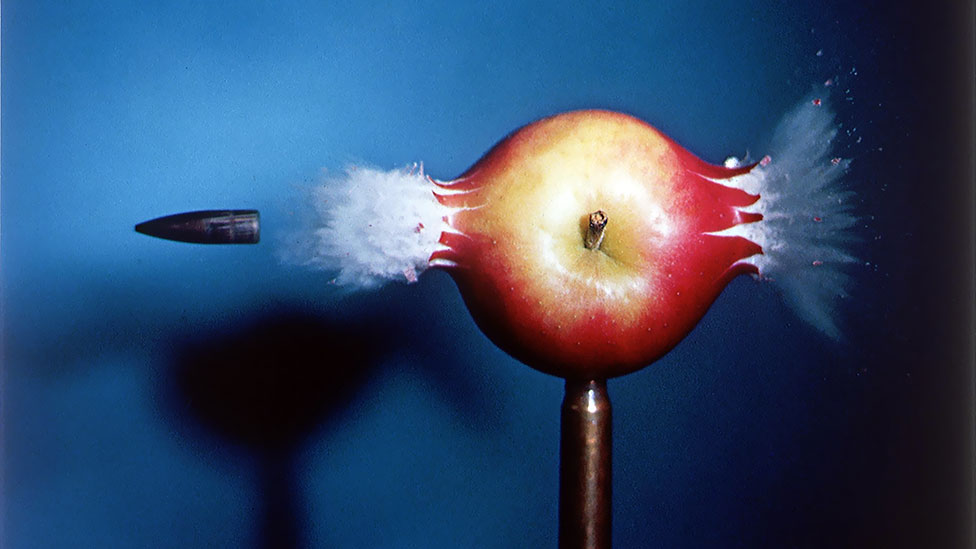 (This article first appeared on BBC Future; many thanks to the Michael Hoppen Gallery for their help with the article andpermission to use Edgerton’s pictures on the blog.)

Every time you use the flash on your smartphone or camera, you should give silent praise to Harold Eugene Edgerton. In the era of vacuum tubes and radios the size of tables, Edgerton created a way to stop the world; a bullet passing through an apple; a footballer’s boot connecting with a ball; the crown-like splash created from a single drop of milk. He was the first man to harness electricity to freeze time to an instant.

Edgerton’s iconic images would be difficult enough to create today, even with computers on hand to open and close the shutter and fire the flash. But Edgerton took his pictures in the days of analogue, recording them on a motion picture camera converted to shoot at previously impossible speeds, and lighting them with an electric flash he invented himself. Intricate geometries happening so fast the human eye is incapable of comprehending them were suddenly captured for all to marvel at.

“He captured wonderful, captivating images that transcend the boundaries between science, art and entertainment,” says Colin Harding, a curator at the UK’s National Media Museum in Bradford.

To decades of students at the Massachusetts Institute of Technology (MIT) he was known as ‘Doc’. To the pioneering underwater explorer Jacques Cousteau, who collaborated with him, ‘Papa Flash’. Edgerton was born in 1903 in Nebraska, and became passionate about two things – photography and electricity. He was taught how to use a camera by his uncle, and worked for a local power company before being accepted as a student at MIT.

During an experiment using a rudimentary computer, Edgerton found the overheating warning lights (blinking at 60 times a second) seemed to freeze the moving parts of its motor as if they were standing still. It gave Edgerton the idea that bright, split-second bursts of light could illuminate this high-speed world. In those days, there were no high-speed films allowing you to shoot with ambient light unless you used a shutter speed lasting many seconds – pretty useless unless your subject was stock still. Flash was vital in giving enough light for these ‘slow’ films to capture moving objects.

Up until then, flash in photography largely meant flash powder – a mixture of magnesium and potassium chlorate – which created an incandescent controlled explosion. Edgerton created a stroboscopic light that contained a bulb full of an inert gas, initially mercury. The bulb was connected to a battery – the volt of current would cause the gas molecules to excite, causing an instant of bright light. The duration of the flash was much easier to adjust, making it more flexible, and thanks to the battery, the flash could recharge and be shot again and again (compare that to the magnesium-filled flashbulbs, which could only be used once and had to be thrown away). Edgerton called it the stroboscope.

Edgerton’s flash could fire a burst of light that lasted only 10 microseconds – 1/100,000th of a second – and replaced the mercury gas with xenon, which allowed the flash tubes to be smaller. It meant Edgerton had a device that could freeze the fastest bullet or rapidly beating hummingbird wing. The basic design still lives on in the electronic flashes we use today.

But more than this, says Dr Michael Pritchard, head of the Royal Photographic Society (RPS), Edgerton was using high-speed photography as a diagnostic tool. ”Perhaps his greatest legacy (aside from his images) is his use of, and development, of a photographic technique as a tool for engineers to solve problems and to examine how machines operated.”

Photographic giant Kodak was initially sniffy, and thought Edgerton’s device would struggle to sell 50 examples. The professor later took a night-time photo of a boxing match, perfectly capturing the two fighters, and wired the photo to the nation’s newspapers to prove his point. The age of the electronic flash was born and many, many millions have been made since.

Edgerton’s pioneering work wasn’t confined to the studio. During World War II he developed a giant version of the electronic flash – that could be carried in the bomb bay of a modified bomber; he proved its worth to sceptical intelligence chiefs by illuminating the ancient site of Stonehenge on a moonless light. The flash system was later used to take photos of the drop zones in Normandy ahead of Allied paratroop landings, showing areas devoid of German troops that could be used as landing zones.

After World War II, Edgerton created his most technically impressive photographs – ones which captured the very first stages of an atomic explosion. No camera then devised could open and close its shutter quickly enough, so Edgerton built his own (called the Rapatronic). The light from the explosion activated a photo-electric cell on the front of the camera, which opened and closed the camera. By 1950, Edgerton’s technical team had managed to cut the shutter’s opening time to as little as 1/4,000,000th of a second; the atomic explosions he captured at Eniwetok Atoll in 1952 (from several miles away) are surreal orbs, looking like huge balls of melting wax.

Edgerton, who was still working when he died in 1990 at the age of 86, continued his photographic experiments throughout his academic and inventing career. His images became lauded not just as feats of technical prowess but as pieces of modern art. “A great populariser, Edgerton’s photographs with their unusual subject matter, sharp detail, strong use of colour and formal composition appeal to a very broad audience,” says Harding.  “They confirm the extraordinary power of photography and create a sense of wonder from ordinary, everyday events such as a falling drop of milk.”

Edgerton himself recoiled at being called an artist. “Don’t make me out to be an artist.  I am an engineer. I am after the facts. Only the facts.” The burst of flash for your next snapshot, perhaps, is tribute enough.

Dr Harold Edgerton: Abstractions is currently on show at the Michael Hoppen Gallery in London, until 2 August.