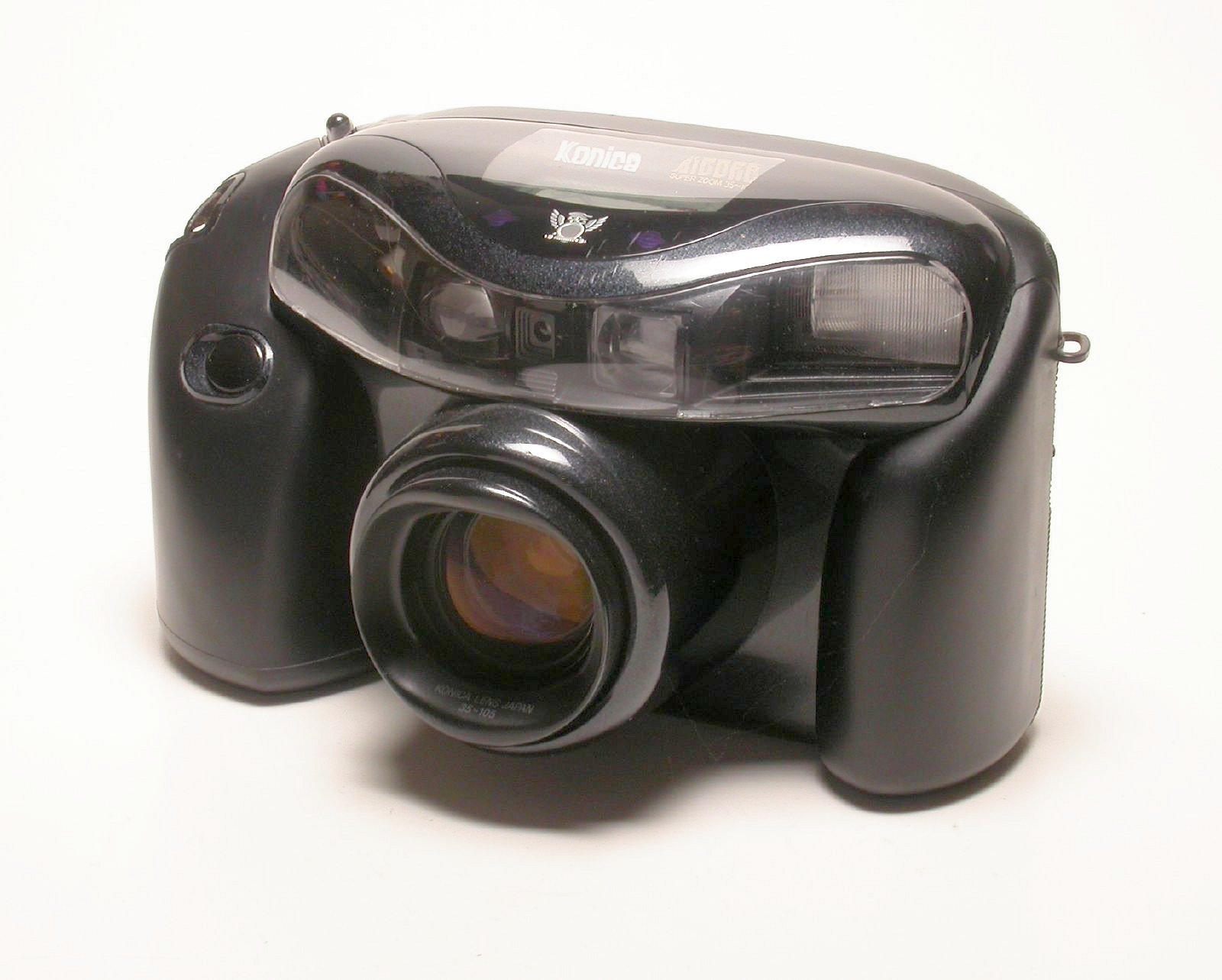 From the 1970s, compact film cameras entered a new golden age of design.

Many manufacturers turned their back on metal in favour of plastic, which was lighter and easier to mould. While many camera designs adhered to the classic rectangle, the plastic revolution sparked a new age of creative freedom, ushering some of the most interesting – or indeed, downright bonkers – camera designs to be found in photography’s long history.

Kosmo Foto has turned the spotlight on 10 35mm compact cameras from the 1980s onwards. All of these cameras went into series production (no weird concepts here), and none of them come from the novelty/toy camera stable, which is a whole other ballgame. And whether they’re design genius or deserve to be banished to the back of the metaphorical camera cabinet – well, that very much depends on you.

The Cosina CX-2 will forever be remembered as a foot note – the camera that inspired a much more well-known descendant, the LOMO LC-A. But the Soviet copy, as enjoyable as it is, lacks some of the Cosina’s features, and indeed its tactile masterstroke.

Unlike the LC-A, who lens opens with the flick of a switch on the bottom of the camera, the CX-2’s lens is opened by twisting the entire frontplate. One quarter turn slides open the lens cover and the viewfinder. The zone-focus CX-2 had an automatic exposure system which took care of both shutter speed and aperture. All you needed to do was make sure you had the right focus zone selected and you were good to go. There was even a self-timer, something LOMO never managed to realise on their cult compact.

Olympus design guru Yoshihisa Maitani devised the classic XA after watching a delivery truck catch fire while he was relaxing in a spa hot pool – “it was a once-in-a-lifetime moment, but of course nobody takes their camera to the bath, so unfortunately I missed the opportunity,” he once said during a lecture. The XA took the make-it-smaller mantra to almost comical levels. Here truly was a camera you could fir in tour pocket, its lens protected by a sliding, clamshell-style cover.

The XA, a rangefinder, birthed a small family of cameras, most of them zone-focus designs not dissimilar to the Cosina CX-2 (and all with excellent lenses). The first follow-up, however, was something much more idiosyncratic. In the last gasp before autofocus, Olympus decided that a rangefinder might be a bit finicky for the bucket-and-spade brigade and opted instead for a focus-free lens linked to a selenium meter to calculate exposure. The XA1 looks like Maitani’s famous miniature compact is trying to eat a Trip 35. But hey, at least you’re not going to run out of batteries.

The 1980s was the decade of the video camcorder, and the camcorder aesthetic obviously seeped into the minds of more than few stills camera designers. Yashica’s Samurai X3.0 was possibly the most shameless result.

A half-frame camera – squeezing 72 images onto your roll of 36-exposure 35mm film – the Samurai wrapped this retro concept (which had been very popular in the film-frugal 1960s) into a thoroughly 80s body. Intended for one-hand shooting, just like a camcorder, the Samurai featured a hand grip that stopped its oh-so-smooth plastic body slipping out of your hand onto the concrete/sand/seawater below. Its’ black plastic body featured zoom buttons which could be activated with a simple click of the fingers.

Certainly eye-catching today, the Samurai featured a fantastic lens and an idiosyncratic landscape half-frame format, aswell as the usual portrait orientation. So there was definitely more going on than just the notable body design.

You could imagine Flash Gordon toting something like this in a 1930s serial. The steampunk-flavoured O Product was made of brushed aluminium, harking back to the metal-heavy designs of another generation. It even featured an external flash, mounted on a detachable arm, like something that would have flash-bulbed a mobster leaving court in 1930s Chicago (“Get that thing outta my face!”).

The faceplate, with its constellation of circles containing lens, viewfinder and autofocus is another intriguing feature. This wouldn’t be Sakai’s only contribution to the Olympus compact camera Hall of Fame, but it’s probably his most beautiful.

If you made your living on the building sites of the late 1980s, you couldn’t whip out your smartphone every time you needed to take a picture. And your average snap-happy compact camera wasn’t exactly built for the rough and tumble of a construction job.

“Genba Kantoku” means “site supervisor” in Japanese, and just like your average foreman, this Konica is not to be messed with. If you like cameras built tough for whatever the world can throw at it, the 28WB is most definitely the camera for your tool bag.

The tough Konica was waterproof, dustproof, sandproof and shock resistant.

When is a compact camera not really a compact camera? Meet the Sure Shot Zoom XL, Canon’s impressive attempt to make the world’s biggest compact camera. Built around a very impressive 39-80mm zoom lens – reputed to be as good as the company’s FD SLR lenses – the Zoom XL (Autoboy Zoom Super in Japan and Prima Zoom F in Europe) looks like it should be shooting 120 film and not 35mm.

Screaming “1980s design!” from every square inch of its not-exactly-svelte frame, the Zoom XL tipped the scales at a little less than 600g. There was enough spare room in its voluminous chassis for a remote control! Its hand grip is almost the size of another compact camera!

Two buttons next to the lens zoomed it in and out – another stopped the camera’s autofocus getting distracted by the foreground in case you wanted the focus on the far distance.

Not one for when you’re travelling light, unless you’re someone used to hauling around glass plates and a Victorian tripod, the Zoom XL showed what was possible if you didn’t take the term “compact” too seriously.

Also known as the Jet 135 and the Photura 135, this plastic fantastic looked like a cross between a video camera and a spotting scope, all shiny plastic and hidden buttons. Boasting a 38-105mm lens with no less than 10 elements, the Epoca 135 also featured a waist-level finder for when you didn’t want to lift this somewhat suggestive slice of early 1990s design up to your eye. There was even a close-up attachment for those who got a kick out of taking macro pictures with something that looked like a futuristic telescope.

It looked like the kind of camera Darth Vader might have kept in his glove compartment. Or the result of a cruel bet to see if someone could design a camera which looked like a frowning duck.

There are plastic cameras from the 1990s and then there is the Konica Aiborg, the product of a truly unique design aesthetic. “This camera is ugly, has poor ergonomics, has one of the worst viewfinders in a modern camera I’ve seen, has a confusing and illogical arrangement of buttons, and is loaded with modes that are completely useless,” Mike Eckman wrote in his review of Konica’s singularly unique camera.

The Aiborg has a top plate LCD panel the size of an early 80s handheld game and ergonomics that have set a benchmark for poor useability. Extra marks, too, for size which stretches the concept of “compact camera’ to the very limit.

Naoki Sakai didn’t finish with the O Product. Three years later, he designed another camera based around the Mju-I.

The Mju-I compact camera wasn’t just the stepping stone to the Mju-II, the poster child of cult 90s compact cameras, but it was also versatile enough to spawn several other cameras. Some were relatively faithful to the Mju aesthetic, such as the fake leather-clad LT-1, but others were much less conventional. The Ecru was one of them.

Ecru translate from French as “unbleached”. It’s not just the name which is intriguing. The whole shape of this camera goes against the compact camera trend of smooth rounded corners, easy on the hand. The Ecru is a spiky, pointy oddity in comparison.

The Ecru’s looks combine Art Deco style with futuristic modernity, fashioned by Sakai. Only 20,000 of these cameras were made, 10,000 of them remaining in Japan, and they’ve become one of the most collectable compact cameras in recent years.

Samsung might not be what you immediately think of when you imagine an Asian camera manufacturer, but the Korean conglomerate did indeed make a bunch of film cameras in the run-up to digital. The ECX 1 was their interesting mid-90s take on the all-singing, all-zooming compact concept.

The camera’s specs are pretty similar to a vast number of contemporary compacts, with a 38-140mm zoom, a fastest shutter speed of 1/400 and metering for films up to ISO 3200. But the styling? Samsung were in a club all of their own.

The ECX 1 is not the most graceful of cameras. With the lens extended, Pinocchio-like, the Samsung takes on the look of a trumpeting kid’s TV elephant. From the class of compacts which tried to be every kind of camera at once, the Samsung’s LCD panel is worth an entry on its own. On the right-hand side are a word salad of modes that looks like something from a surrealist poetry night (“Norm! Fuzz! Port! Step!”). Samsung might not have left a giant footprint in their short-lived film camera days, but few who have seen one with forget the ECX 1.

Which other cameras would you add to the list? Let us know in the comments below!

The two Olympus by Naoki Sakai really stand out. Crazy! but I could imagine going tor the O. But I bet the price point is steeper than my Canon F1…

I had an XA and I did use it in a Japanese Bathouse (clothes on).
A totally excellent camera.
Then I left it in the magazine pocket of a plane.

Furthermore, these cameras show that the Japanese had mastered the art of producing short run, zany and beautiful cameras using the guts of conventional “functionality vs cost” cameras (like the AF-10 and Trip).
It is quite a level of industrial perfection, and the cameras were not that expensive, not like western “designer” brands.

I have a still functionning XA and flash !

I can’t believe that the Widelux was not included in this list!

It’s not a compact camera, Dean.

Odd 35 design in general would be a great follow up. Add the Rollei SL2000!

At least one of the Nikon swivel design, maybe the SQ. Also the left handed Yashica Samurai Z L and the Pentax Optio NB 1000.

[…] blame Kosmo Foto! His article on Ten of the quirkiest compact film cameras reminded me I had once owned a Canon Epoca. The article prompted me to look for a working model and […]