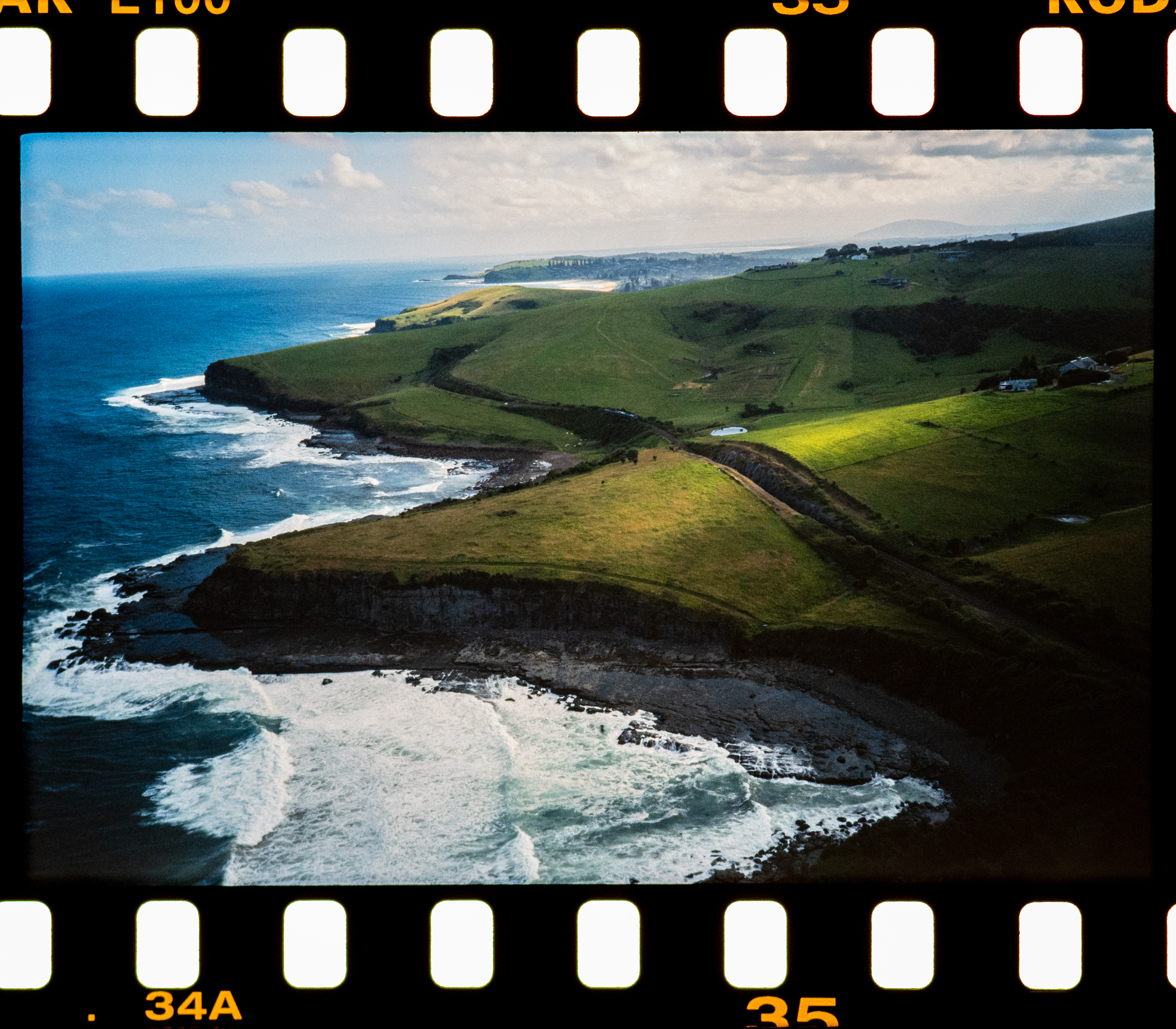 Drones have transformed aerial photography. What was once the preserve of professionals with deep enough pockets to hire a helicopter, is now relatively affordable. And drones can fly low enough to capture truly dazzling new perspectives, both for stills photography and video.

But it’s fair to say that it’s been almost entirely a digital feast. Strapping a Canon AE-1 or an old Spotmatic doesn’t make much sense when you’re hundreds of feet away on the ground, unable to bring anything into focus. And how do you press the shutter?

Enter Jason De Freitas, an Australian photographer with a keen interest in both drone flying and film photography. He recently showed some fantastic images taken from a drone flying off a dramatic stretch of the Australian coastline. What was even more impressive was the fact the images were taken on Fujifilm Provia 100F film and shot on an Olympus Mju-I compact camera.

Where did the idea to shoot film from a drone come from?
I have been into building and flying radio-controlled (RC) aircraft long before I ever seriously got into photography. When I eventually got into photography I very quickly and unexpectedly found a love for film (I learned on digital cameras) and very early on the idea of combining the two hobbies was in my head. It’s surprising it took me this long to realise it but my passion for photography replaced my interest in RC for many years. 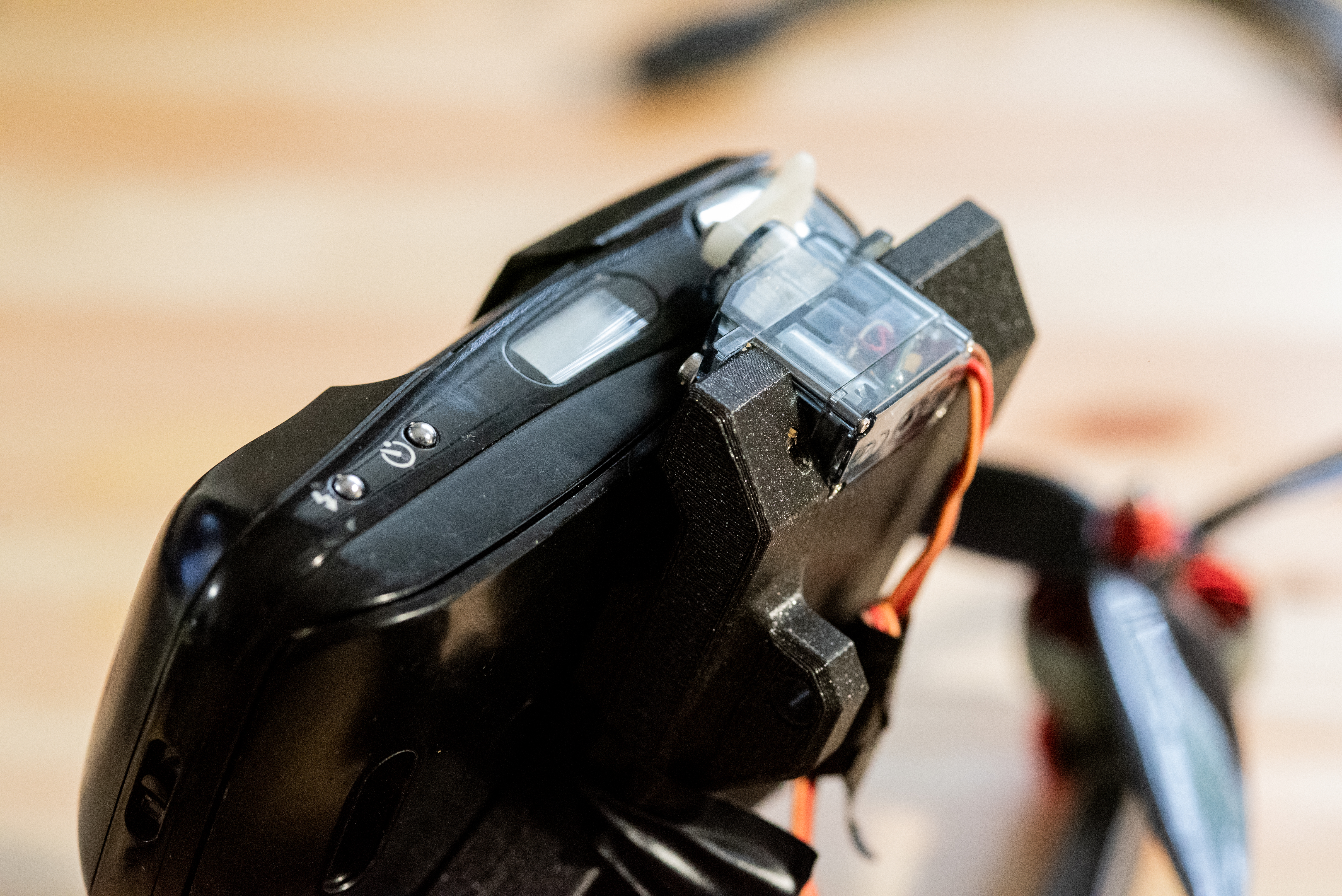 You could blame Covid restrictions for reigniting my interest in drones as well as the incredible leap in technology that first-person view (FPV) drones have seen in the five-six years it had been since I had last built one. My film photography has a very strong emphasis on using film where it seems like it would be too much effort to be practical in an age of digital convenience. I believe the art of photography can come from the process or at least add to the end result. Social media helps this along with the ability to share behind the scenes.

Using film on an FPV drone was one of those projects that was just going to be inevitable for me even though it has little practical application – I do it for the love of film, flight and for fun! 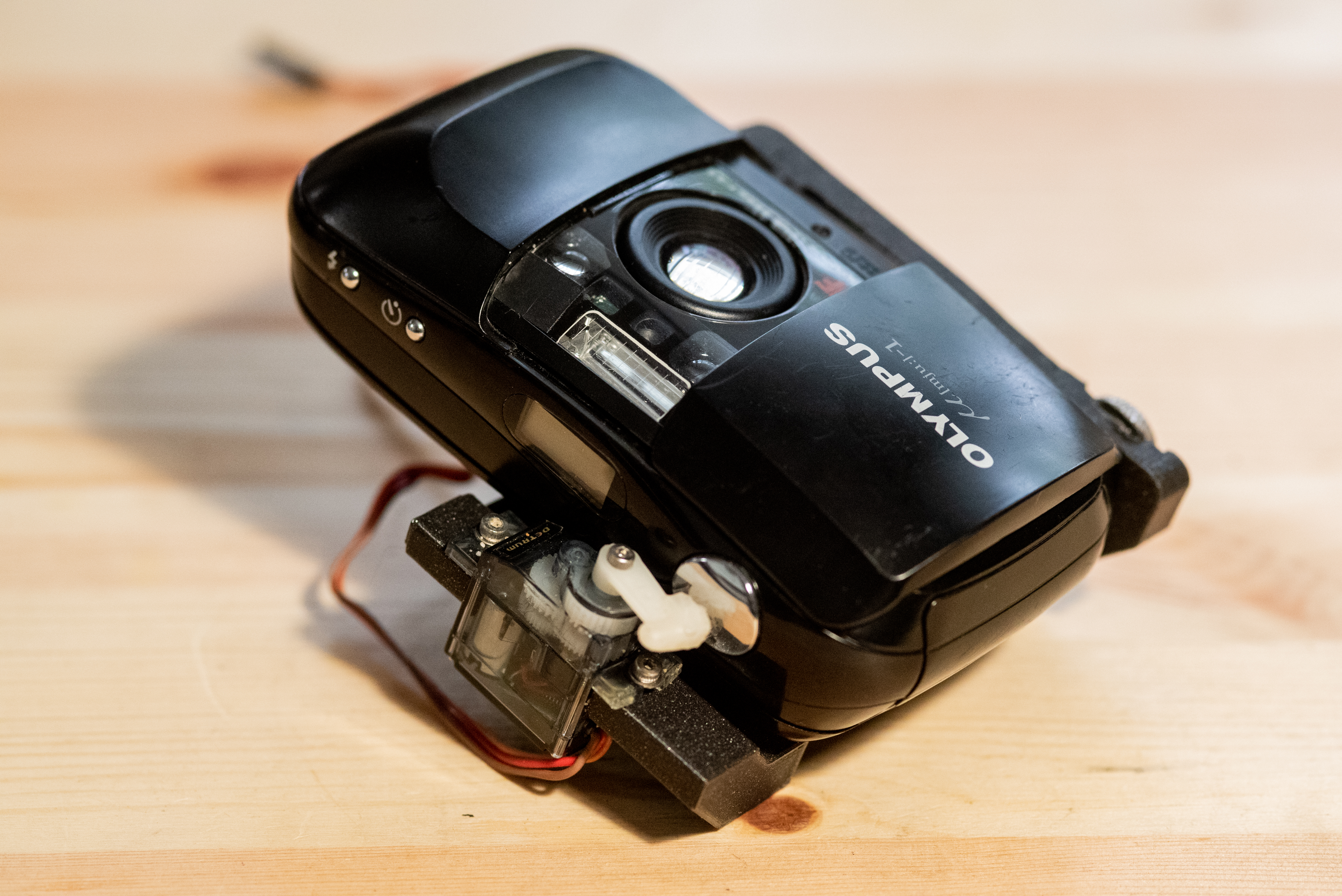 How long have you been shooting film?
I’ve been shooting film for almost six years now. I never expected it to be my main medium, I thought it would be a great tool to really learn the fundamentals of photography. I quickly found myself interested in the whole process from developing, scanning to printing and even projecting. I love how hands-on I can get with it and completely absorb myself in the process.

I started building and flying RC helicopters when I was 16 (I’m 30 now). It’s really what put me on the path to becoming an aeronautical engineer. I’ve been in and out of building quadcopters over the years and I had a significant amount to learn when I recently got back into it again – there’s still a lot for me to learn.

The criteria for choosing the right camera to go with was pretty straightforward. It had to be very light and have an automatic advance – so a point-and-shoot. I wanted it to be relatively cheap as the potential for damaging it is high. It was also important that it was very responsive and had a short as possible delay between pressing the shutter and taking the photo.

I had initially been working on this using a Nikon Lite Touch but I was kindly donated the Mju-1 for the cause. It proved to be just that little bit more responsive which really helps on this style drone – I’m not using a gimbal so most of the time I’m not in a hover when taking shots. The Olympus Mju is also a little iconic and the idea of seeing one flying on a drone was too fun. In the future I’d like to try an AF600 which has a slightly wider focal length. The 35mm focal length of the Mju-1 is sometimes helpful but felt a bit tight for some shots with the legal altitude being 400ft (121m). 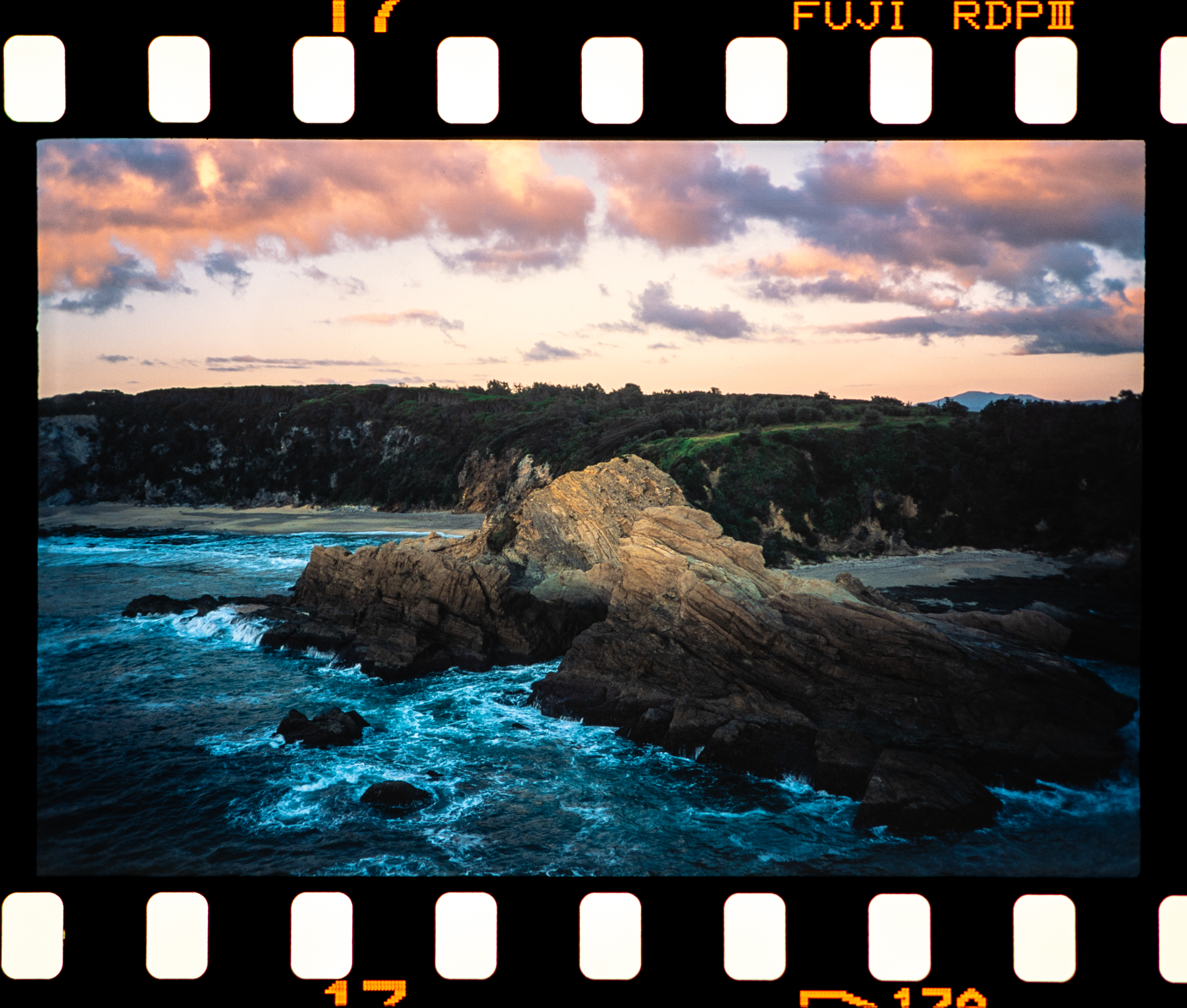 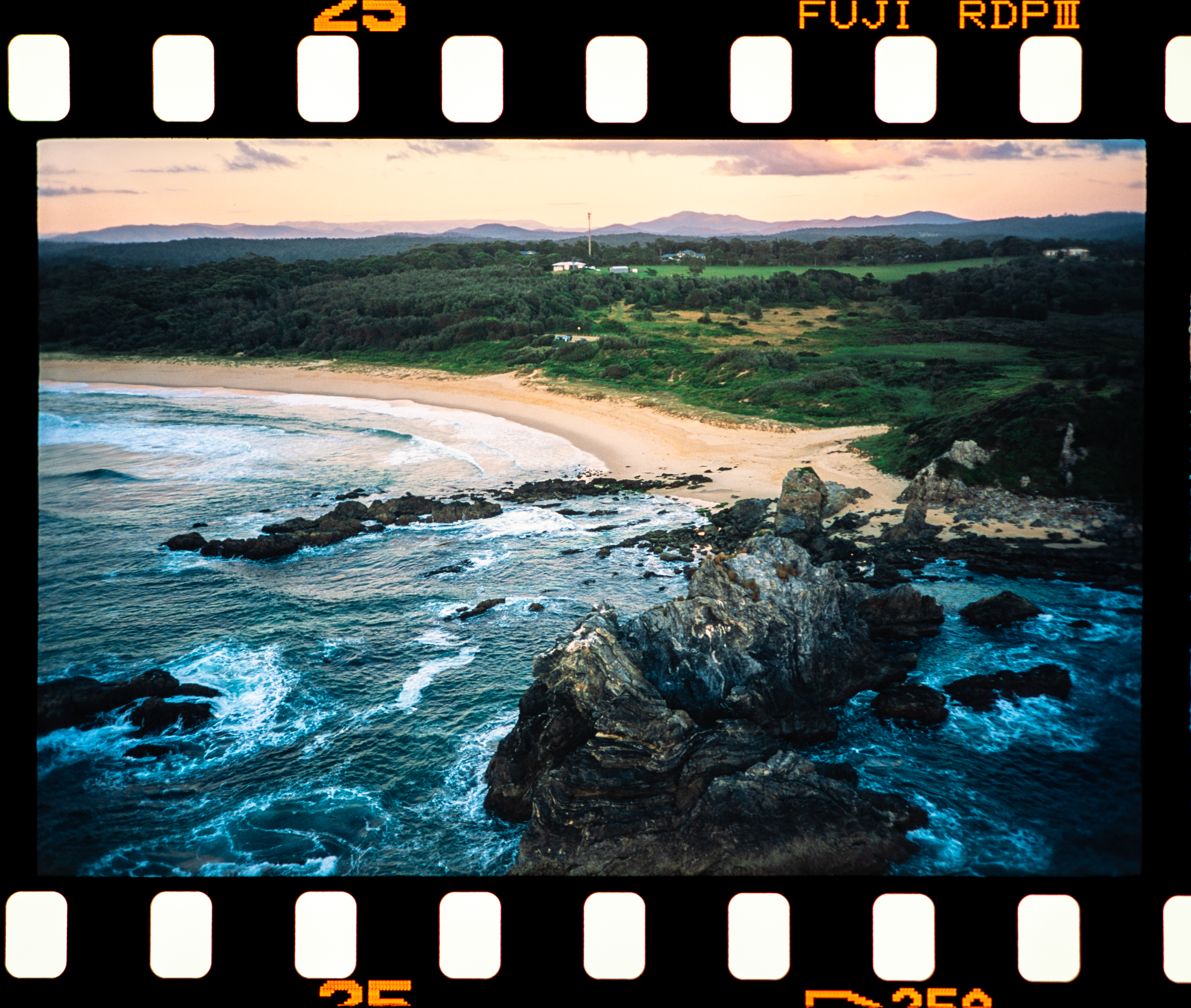 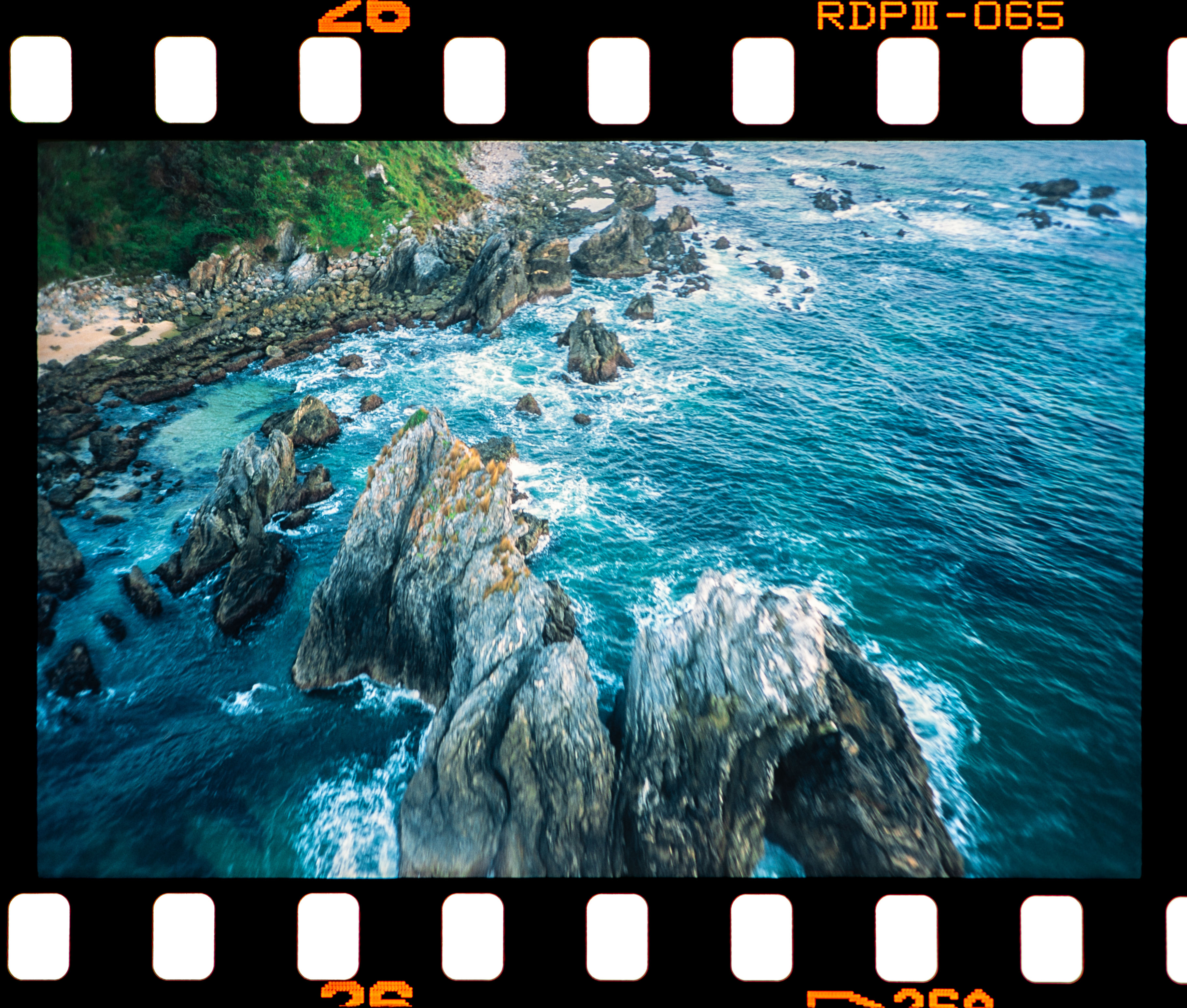 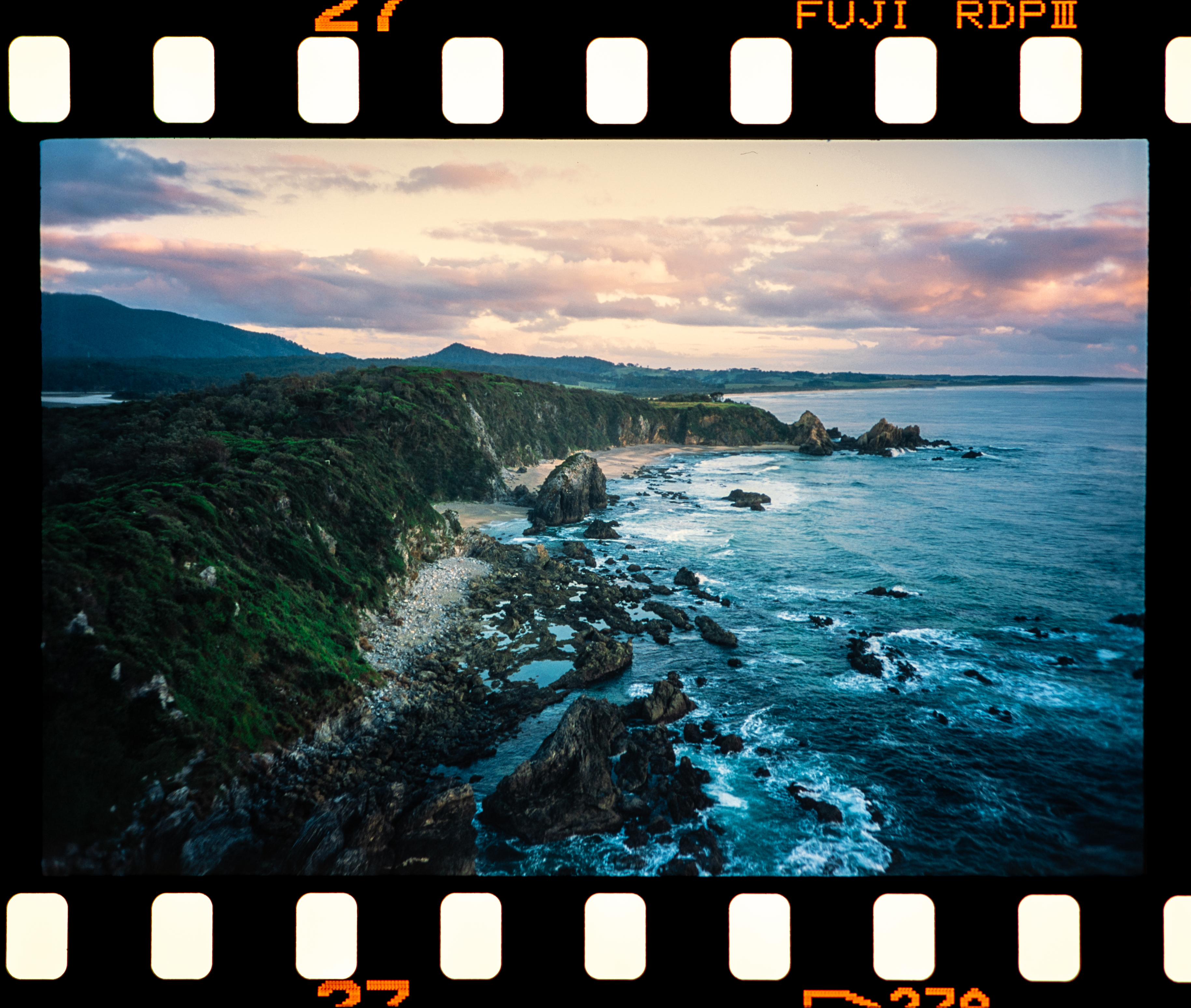 What were the biggest challenges with the design?

There were several challenges when designing what ultimately is a pretty simple camera mount. I went through a couple of iterations getting it low enough such that vibrations would be minimised but with ample clearance of the propellers. Probably the most challenging aspect of the setup is actually aligning the film camera with the FPV camera for accurate framing. The design I went with blocks the viewfinder so I had to mount my phone to it to find where the mount was pointing. After aligning it roughly like this I had to shoot a few frames on film and then line up the scans with the DVR footage from the FPV camera. This let me know exactly how the composition lined up and I was able to set up frameline guides in the FPV goggles precisely.

The only problem is that I lose the precision whenever I need to take the mount off if I plan on getting some GoPro footage as well – I’m still working on a solution to this.

How much modding did you have to do to the Chimera 7?

The iFlight Chimera 7 is actually stock besides my mount and the servo I wired to the flight controller. I chose this drone with plans to mod it in the future for lifting something heavier. I’ve built all my other FPV drones but this setup actually felt like there was little advantage to building my own comparable setup for the point and shoot project. I did more modding to my radio so that I could have a momentary switch in a position that was easy to trigger in the middle of flying to activate the shutter. The only other modifications I worked on was to add a GoPro for some footage looking back on the drone itself. This was probably more over-engineered than any other part of the project. 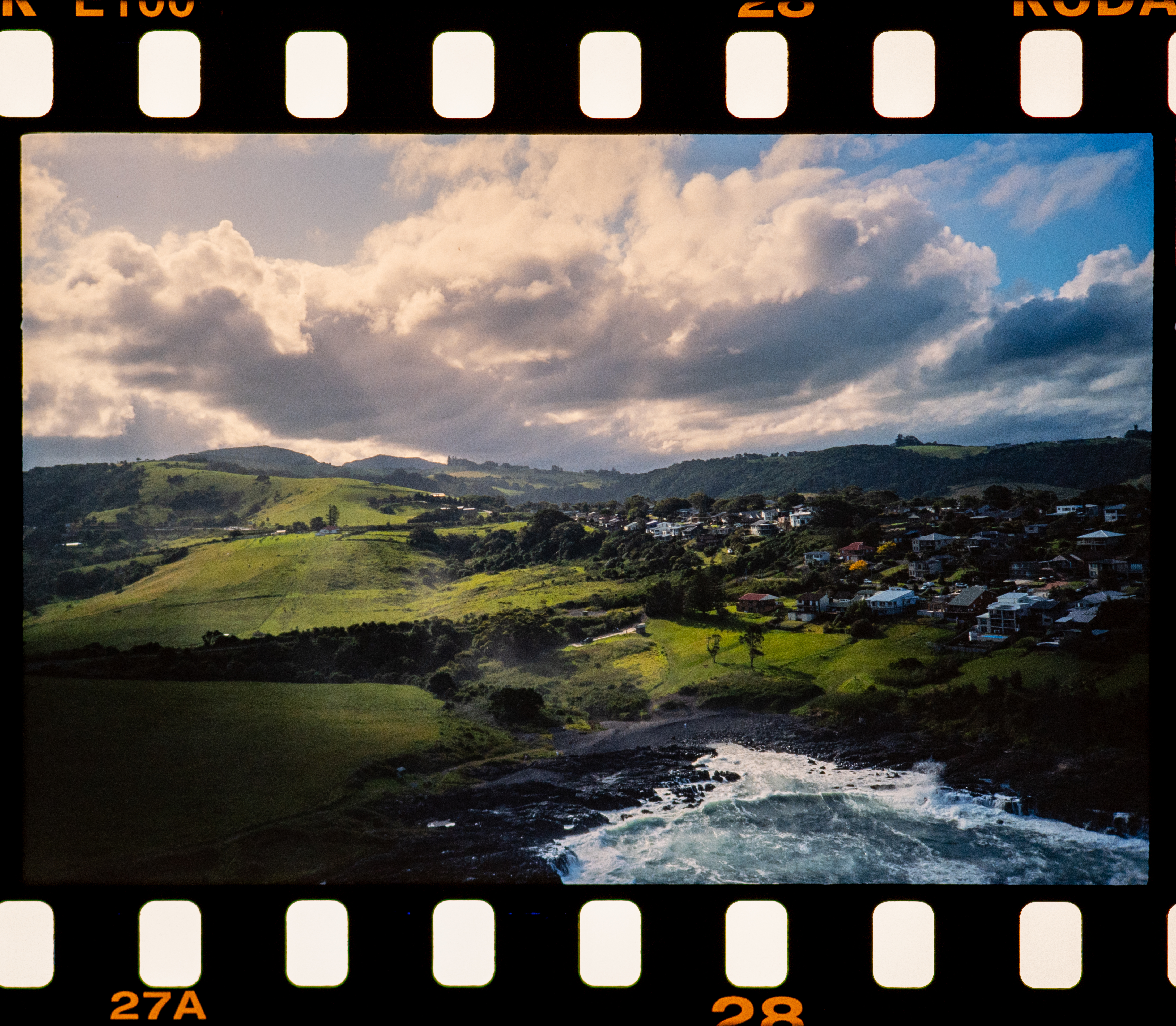 How easy was it to design the shutter activator?

Designing something like this is essentially my bread and butter. Designing it in CAD and 3D printing is just one of many ways it could be approached and if you really wanted you could glue it to the camera. I think when I was testing out wiring a servo to the drone I just hot glued it to a camera – it was almost enough.

It must be even more of a challenge using slide film, which needs such precise exposure

I do have a soft spot for slides. I think it’s an analogue experience that more people need to try, especially if you’re pretty new to film. I knew very well that shooting slide film in a system that I had no exposure control of was quite risky but the idea of seeing the slides on a light table and projected really was irresistible. The full analogue experience of photos that ‘shouldn’t’ be analogue. It has an impact that goes beyond even analogue printing in my mind. It’s quickly becoming my favourite way of sharing images and ironically even sharing video of the projected slideshow seems to have an impact. If you believe in the magic of film then it’s nowhere more evident than through chromes.

Where did you take the first roll?

This wasn’t the first roll I shot through it, I did plenty of testing and tweaking at some local places near my home. The shots I’ve shared here were the real first use of the drone to get images I want to share. I woke up at 2am to drive to a rock formation known as Horse Head Rock, near Narooma on the south coast of NSW, Australia.

What flights do you have planned?

For now I want to take it to some more places around Australia but I’m treating the point-and-shoot drone as a stepping stone to more ambitious analogue aerial projects I’m dying to try. Keeping those under wraps for now!