UPDATE: The film’s datasheet bears a striking resemblance to that of a Kodak colour negative film’s – read Kosmo Foto’s story.

Fujifilm has rebranded its Fujicolor C200 film on its US website – raising speculation that the Japanese film giant may not be retreating from film as some believe.

Fujicolor C200 – one of only two colour negative films to have survived the company’s rounds of discontinuations – is now known as Fujicolor 200 in the US (or Fujifilm 200 on the datasheet).

The film’s listing on the official Fujifilm USA website features a “New” badge, alongside updated packaging.

For the moment, the new branding only appears to be in the US. The listing for the film in the UK still refers to the film as Fujcolor C200. 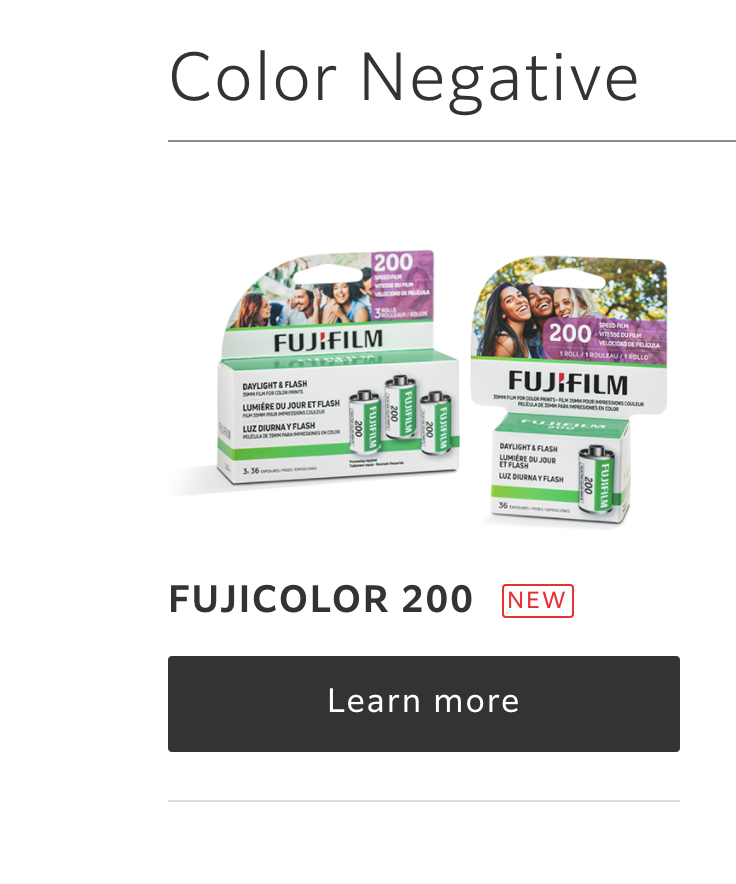 The name change was reported by Nicolas Llasera of Nico’s Photo News on Tuesday (4 January), which you can see in the video at the bottom of the story.

Fujicolor C200 (or 200, as it’s now known in the US) is a fine-grained consumer colour negative film which has been in production since 1990. In 2017, the film’s chemistry was revamped boasting “super fine grain technology”. At the same time the more modern Superia 200 colour film was discontinued.

With the loss of many consumer-grade colour negative films, C200 has gained extra popularity in recent years, and recent production has often failed to keep up with consumer demand.

That sounds like goid news. It has been hard to find for a couple of years now but is one of my favourites!

Someone on reddit pointed out, this isn’t a C200 rebrand – it’s a Kodak Gold rebrand! The curves on the spec sheets are practically identical, and not the same as the C200 curves. Here’s the link to the reddit comment: https://old.reddit.com/r/AnalogCommunity/comments/rw9jkj/new_fujicolor_200_data_sheet_in_comments/hrfe57y/?context=3

Thanks so much – following this up now!