The balcony is distinct enough, with its pair of ornate female sculptures serving as pillars for the facade. Below it a pair of old ladies walk by, their black dresses and plus-sized silhouettes a stark contrast to the svelte, white figures above. These make up a famous picture that has captured my imagination for years.

This picture is now loaded on my smartphone, and is being inspected by an elderly gentleman. He ponders over it, then shows it to his group of friends. Hands fly in all directions as they discuss its whereabouts. Finally they agree on a location.

“It’s not from this neighbourhood. Sorry we can’t be of help”, the man declares “but I can tell you what this sign on the ground floor means – koyreion – it used to be a barber shop.”

I am at an artists’ café in the historic capital of Greece, hoping to locate this 1800’s-era neoclassical building. Admittedly this is like finding a needle in a haystack, especially in a city like Athens that’s riddled with countless other, much older structures. The building I am looking for is the ‘House of the Caryatids’ – the very one that the legendary photographer, Henri Cartier-Bresson, documented in 1953. 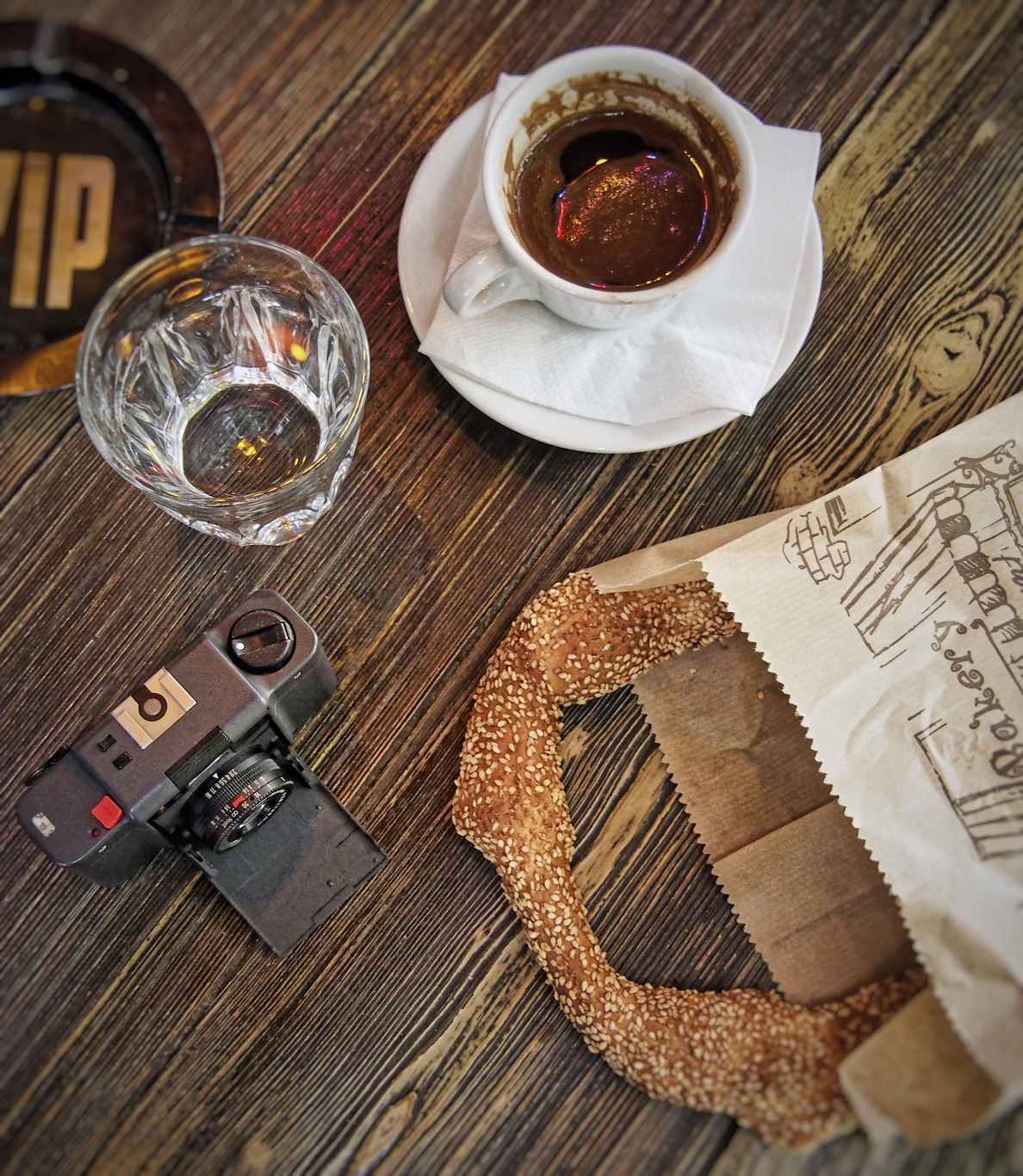 It may not be the most significant structure around here, but to this film photographer it could well be the Parthenon.

Call it a fanboy obsession or my own quirky homage to the masters. In China I once went all the way to the highlands of Yunnan to see the home of British explorer Joseph Rock. I braved narrow cliffside roads in the Philippine Cordillera mountains to meet the descendants of Spanish photographer Eduardo Masferre. My reasons for “finding Henri”, so to speak, are a no-brainer – he was one of the most influential photographers of our time.

With his early Leica IIIg he pioneered the humanist style of photography that continues to inspire the work of photographers everywhere. I’ve travelled across the globe from Singapore to Athens – on assignment for an inflight magazine – to cover the city’s vibrant traditional dining scene. Between sumptuous food shoots and interviews with some of Athens’ renown taverna chefs, I take time out to poke around this city – and hopefully find this famous historic house.

Alas, my tool for this side project is no Leica. In fact, compared to a Leica it’s a mere pistol – the Minox Touring, a limited edition 1990 incarnation of the celebrated Minox 35 camera range.  This tiny folding camera is so basic, it only has a fixed, a zone-focusing 35mm lens. Its other features include a CDS meter, a two-stroke rewind lever and a unique retractable lens design. Still, this camera is so small it easily fits into my cargo pants pocket. With so much lighting and digital photography equipment packed into my luggage, I only had the space for this junior-sized shooter and some Rollei RPX 400 b&w film. 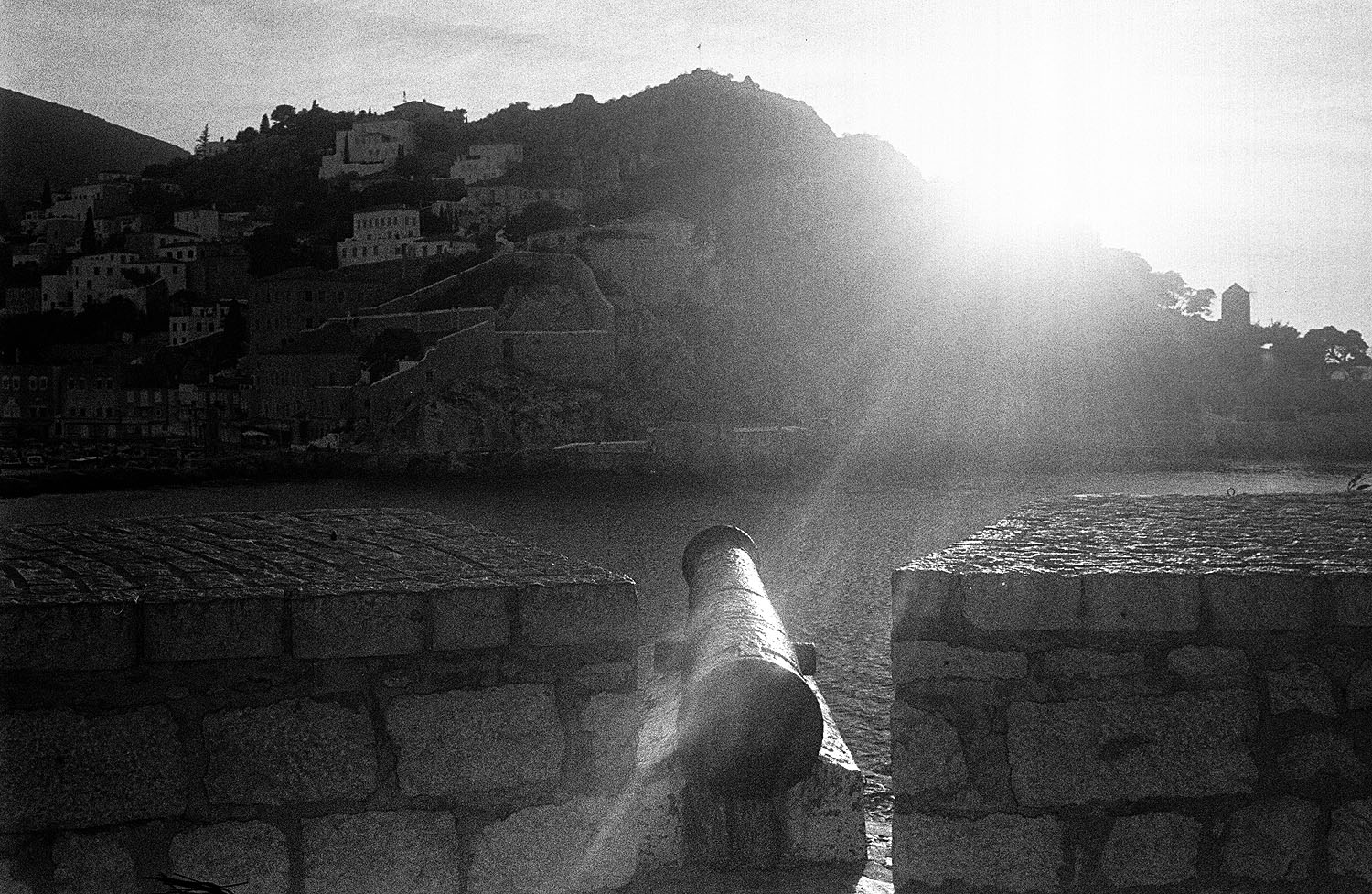 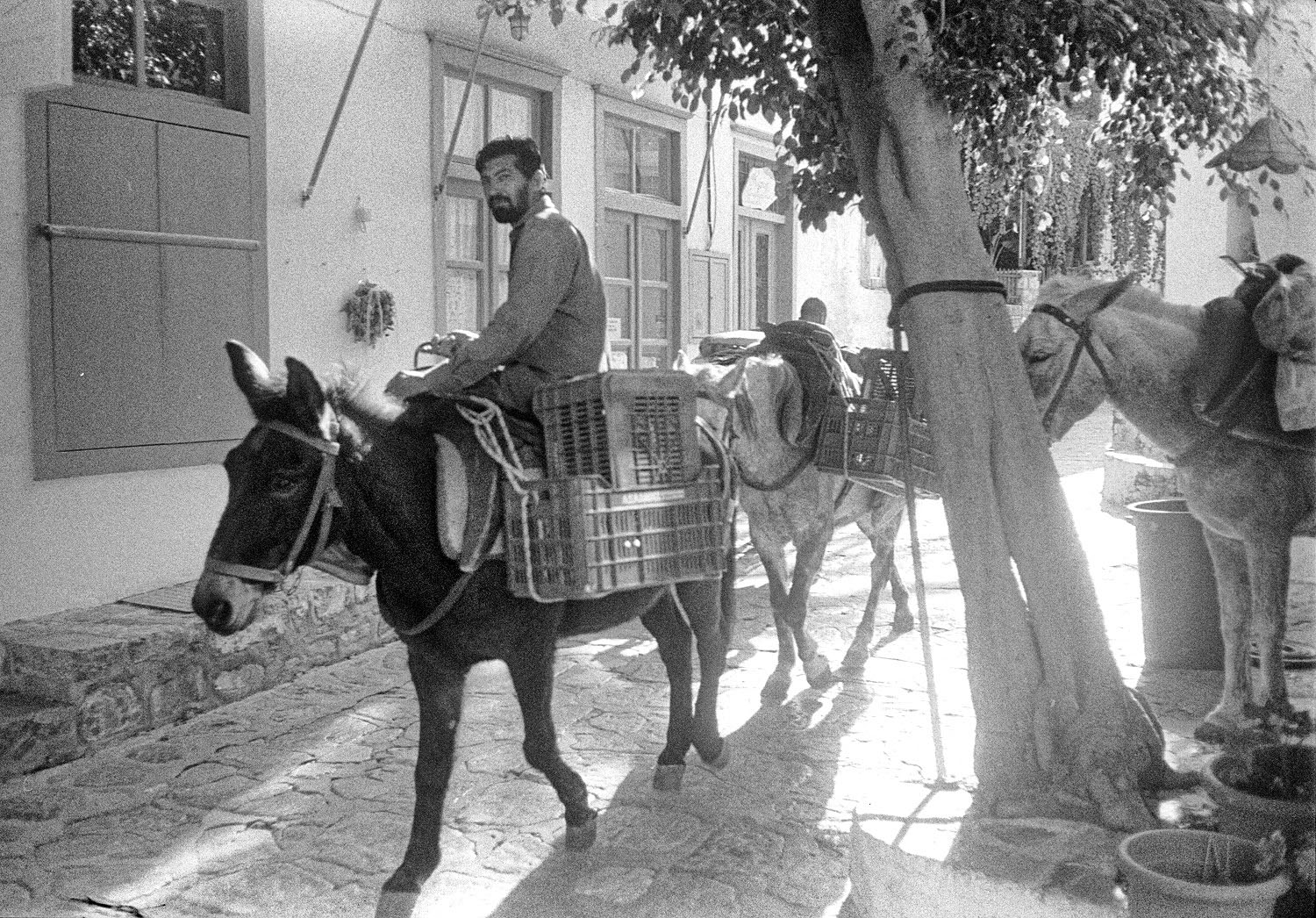 The workload aside, I am happy just to have the chance to squeeze in some personal photography time. When not shooting/gorging on authentic Greek cuisine, I roam the streets of Athens taking in the sights. On the gritty streets around Omonia square, I document traditional sundry shops housed amidst crumbling pre-war architecture. I also check out the Acropolis and its archaeological highlights, of course.

Later on I do another story on Hydra Island on the Saronic Gulf, an hour off the coast of Pireaus. Here I put my Minox to work (alongside a pair of Olympus EM5’s and a DJI drone), capturing the moods of Greek island life.

By the time I finish work and return back to Athens, I have only one morning left to find my building. The hotel staff isn’t much help, and I am left to my own devices in locating the spot. I rifle through a free Athens guide that I picked up somewhere, and to my surprise I find a photo of the very house. Amazingly enough, it is captioned with the location – Agion Asomaton – a street that is fortunately near my hotel!

The next day I set out early with my Minox in hand, for one last photo hunt. Amidst a light drizzle I saunter down quiet lanes, and easily manage the kilometre-long distance to the street. There I find the building itself, just a few houses from the main road 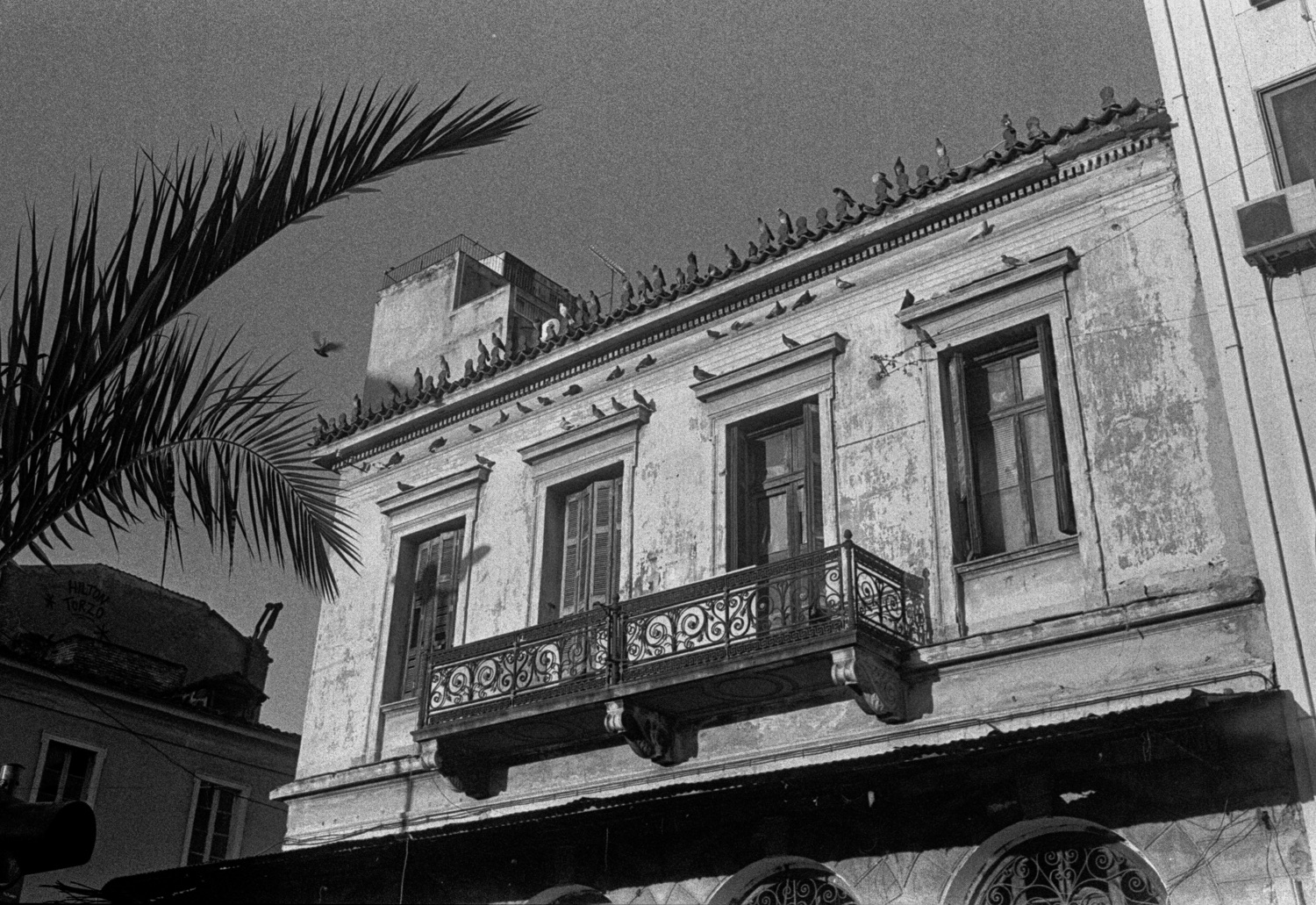 Its koyreion sign is gone, and the façade sports a fresh coat of paint. Otherwise, it looks just as it did when HCB photographed it in 1953.  With my iPhone I take the selfies – the damn selfies, of course – then do a more formal version of myself for posterity. My fanboy vibes running high, I go to the spot where he must have stood that day, and imagine what it might have looked, felt, smelled like. This is the closest I will get to being in HCB’s footsteps. 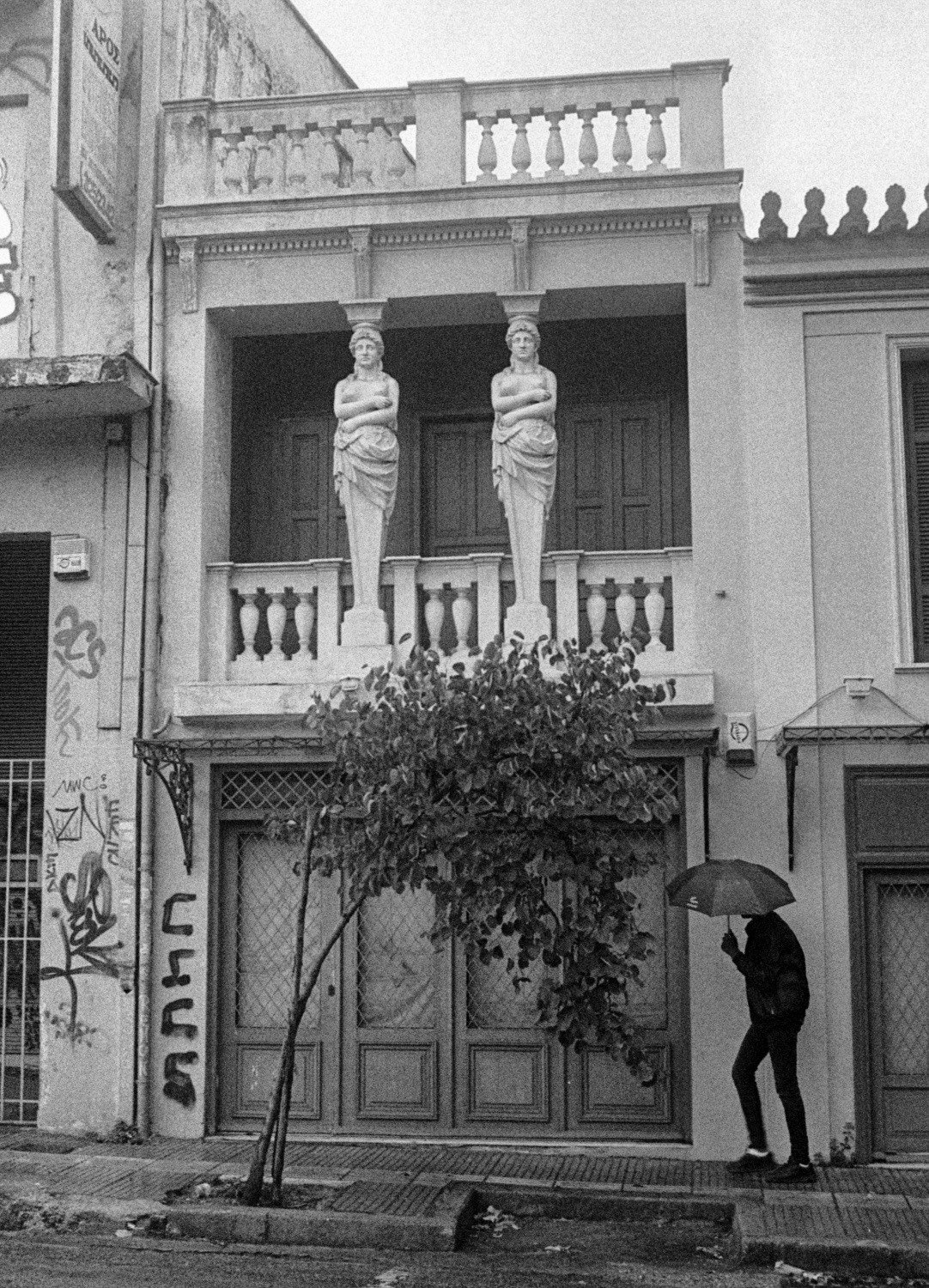 Wanting to capture my own decisive moment, I wait for passers-by to add a human touch to the scene. I make my own version of the HCB classic – not with a pair of Greek yia yias (grandmas), but with a solitary dude holding an umbrella. As far as black and white photos go, this isn’t among my best pics – but it sure is one of my most memorable.

Travel writer and photographer Lester V. Ledesma covers the world for the likes of Conde’ Nast Traveler, Travel+Leisure and Asian Geographic. Follow him on Instagram at @skylightimages.

Lindesberg on an Olympus Pen F

New York on a Leica M4-2 and Rolleicord IV

Loved your article, your quest and the images!

Thanks – Glad you enjoyed it Lorraine!