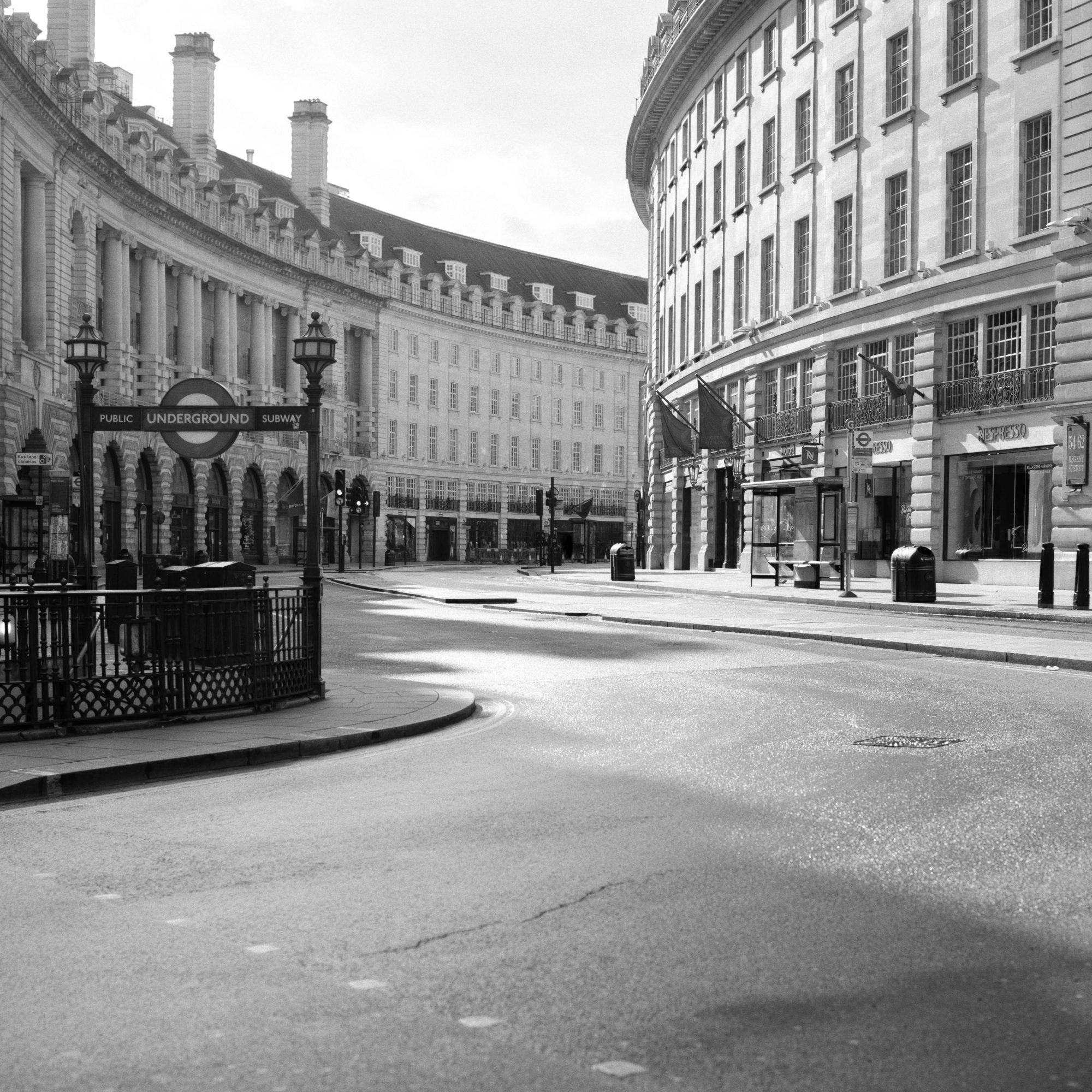 In megacities such as London, the physical effects of the coronavirus lockdown have been stark and empty.

I mid-March, as cases began to rise some two months after the virus was first declared an emergency by the World Health Organization, the UK’s government announced a lockdown, almost overnight forcing almost the entire population to live and work in their homes, only leaving in order to buy food, seek urgent medical treatment or exercise. London went from bustling metropolis to an eerily deserted landscape almost devoid of people.

It was then that Italian photographer Giacomo Mantovani had the idea for a project.

With London’s world-famous landmarks quiet, the flocks of tourists gone, and the commuters locked up at home, Mantovani, who started shooting on a Hasselblad 500CM a few years ago, set about recording the city’s pandemic phase.

“In the last few years, I have been very busy with commercial productions, especially in the last year, having founded my own creative agency – Mantovani Ltd – I really didn’t have time for anything else but work,” he tells Kosmo Foto. “When the virus appeared we started loosing projects we were working on, one after the other, and when the lockdown started I was already grounded. That’s why I decided to concentrate all my time and energy on the project LCKDN20.

“My motivation was to record this unique historical moment so that one day we’d be able to look back into it and remember. But also, from an aesthetic point of view, like many other photographers out there I always tried to get clean shots wherever I went. I mean, no matter if it was London, Venice, Amsterdam, Paris etc… everywhere I shot I always tried to get the empty space, free from people. With the lockdown I could finally get this with no effort, and not only the pictures themselves look amazing, but the shooting experience was simply surreal.

“The first location I shot was Camden Town. When I arrived, I could tell the lockdown was a serious thing as not many people were around. I could only see queues in front of the main banks… it was crazy. I managed to get some clean shots of the streets and then I moved to Covent Garden, Leicester Square, Chinatown and lastly Piccadilly Circus.

“I shot everything on a Hasselblad 500C/M, with various lenses (40mm, 60mm, 80mm and 150mm) and two film backs so I could switch quickly. In terms of film I shot everything on Ilford FP4 Plus and HP5 Plus. I also shot on my OnePlus 7T Pro, and got extraordinary shots on that, but the main project is focusing on film, that’s why I haven’t shared any of the shots taken with the phone. On top of that, I have placed a GoPro 8 Black on my backpack so I could film all the processed and collect material for quick videos and possibly a short documentary. 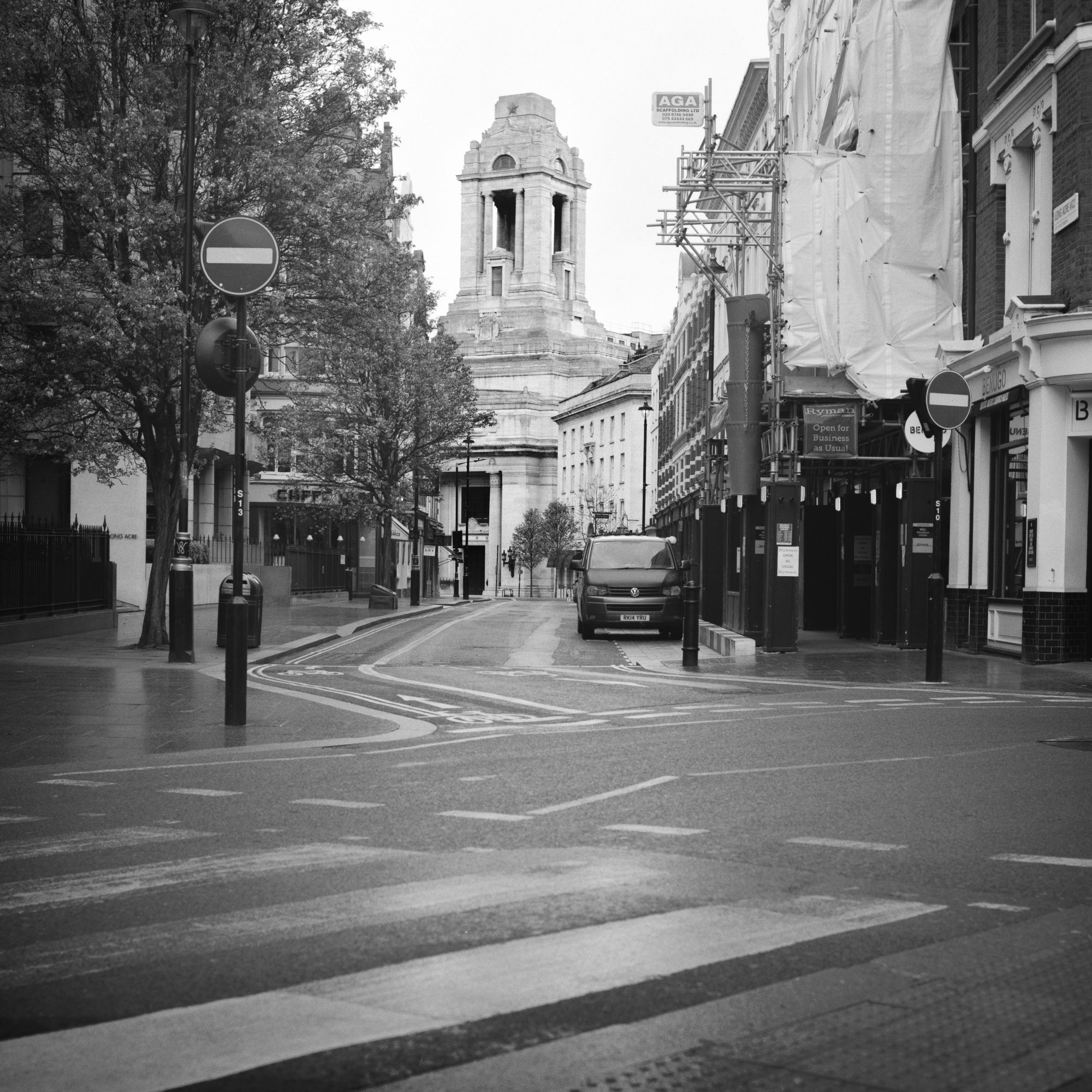 “I took me exactly 20 shooting days, from the end of March and the beginning of May, to document all the areas that I have pinpointed on the map at the beginning of this journey. It was quite intense as when I was not shooting I was collecting, scanning and archiving films, and it always felt like time was never enough.

“I was very impressed by Covent Garden. That’s probably the place that hit me more as there were really no people at all, apart from the security guards. But also St Pancras International was impressive. Almost everywhere I went it felt like I was living a dream, a very eerie one.

“By the end I had shot 150 film rolls. This is definitely the biggest project I have realised not only on film, but in general. The amount of work behind it, and the amount of work I will have to put into it to finish selecting the pictures to print, print them, organise exhibitions and realise the book, it’s simply unprecedented compared anything I have done before. 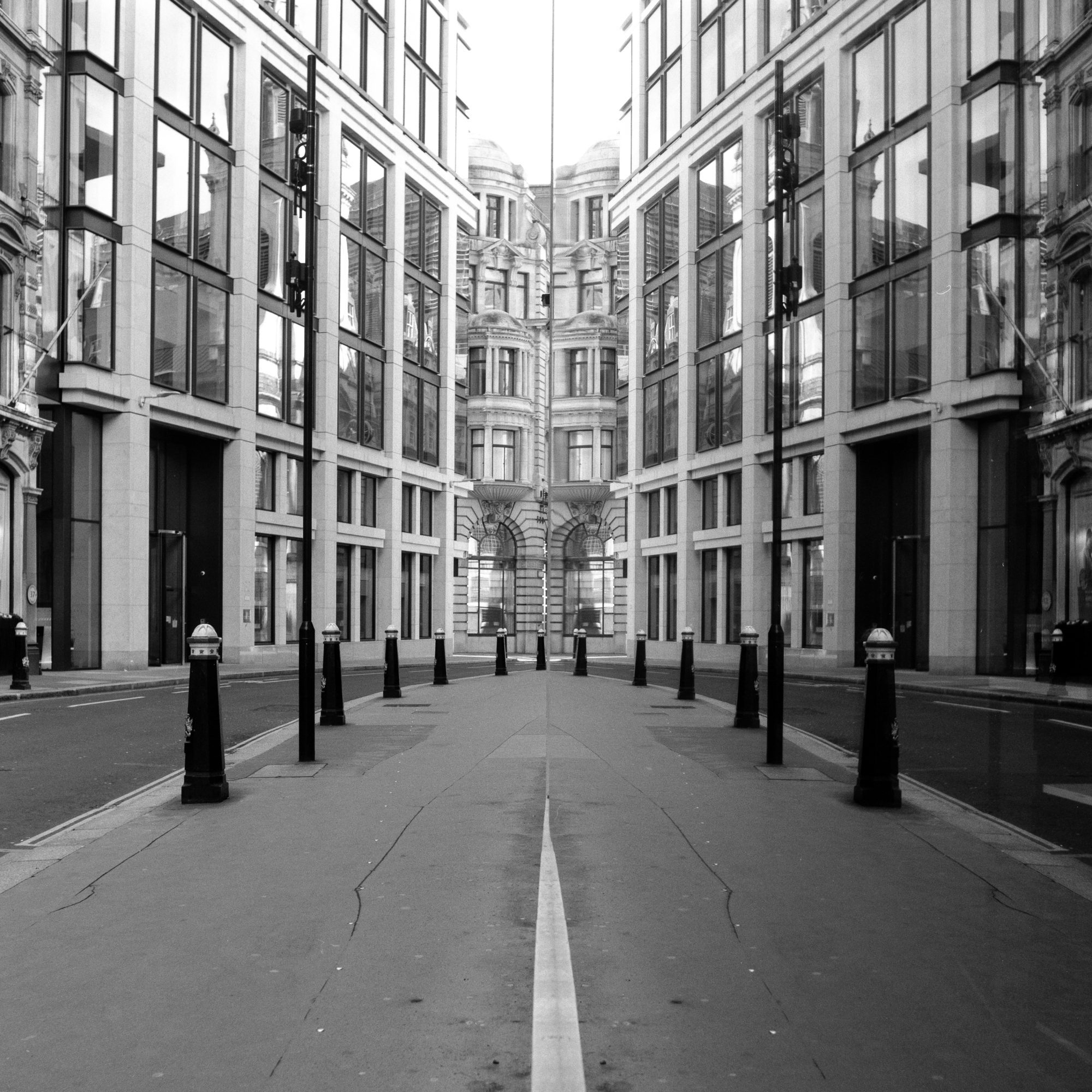 “The process wasn’t easy, I have to admit. I had to face many issues, both technical and logistical, including an entire batch of 10 rolls compromised by a production issue, resulting in pictures with bright spots everywhere, like the one at the British Museum. But also, an eye infection that kept me sleepless and in pain for a good week – and which slowed down my already tight schedule.

“And lastly but not least, it goes without saying it that the large amount of film rolls I was exposing, meant a huge amount of time to be spent after: constantly taking them for development, re-collecting, scanning and archiving them in order to ensure I was getting the right shots. It was a very intense but uniquely beautiful experience, from which I learnt a lot and came out with an amazing archive of extraordinary shots.

“The plan for this project is now to finish the selection of at least the very best 200 shots, print them and make a book out of them. And more importantly, I am getting in touch with museums, galleries and curators to organise exhibitions. These shots deserve to be printed in large scale, at least 140cm x 200cm, so finding the right venue for the exhibition is essential — a venue big enough to be able to host the large-scale prints.”

Thanks to Paul McKay of Analogue Wonderland for help with this story.

Wonderful shots and a great documentary piece. If only I lived closer to central London I would have loved to do something similar.