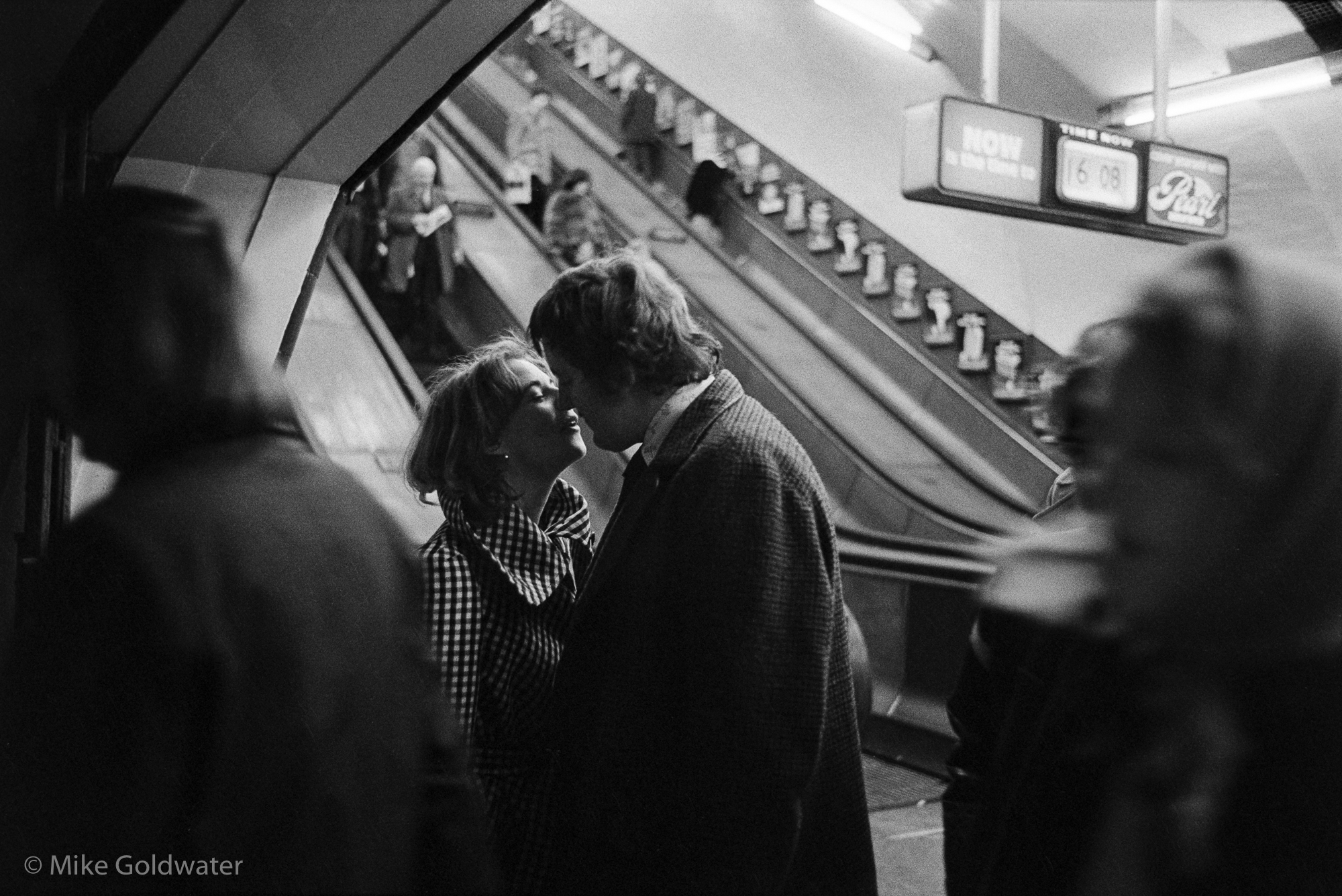 Earlier this year, I picked up a copy of the book ‘London Underground 1970-1980’ by Mike Goldwater.

The Tube that Goldwater photographed has more in common with the shelters of the Blitz than the advertising-bedecked, smartphone-supported network Londoners use today. It was only in the early 1970s that the Tube brought in neon lighting, making it easier for photographers to shoot, as long as they pushed the film a few extra stops.

The book is a time capsule of the Tube from a lost age; homeless people sleeping on platform seats, commuters wearily queuing for ticket inspectors, moments of intimacy under harsh neon lights.

Kosmo Foto spoke to Goldwater, who is a commercial photographer, about what had drawn him to making these images.

When did you start shooting on the Tube?
“I began taking pictures on the Underground in 1970, when I was 19.”

How did people react to you shooting?
“Nearly everyone is on the Underground because they have a destination in mind and to some degree they shut themselves down for the duration of their journey. I, however, would travel on the Tube with no destination, getting on and off trains on whim so that each journey was a bit of an adventure and this I felt put me somehow into a different time space to most other travellers.

“I would work with some conviction when I found a situation I wanted to photograph and when you do this people often ignore you. On other occasions, a smile was enough to grant implicit permission to carry on working.  Sometimes, I needed to explain to people what my project was about. After a while, I began to carry a set of small prints of images I’d already made on the Underground so I could show people what I was doing.  If they didn’t want their picture taken, I’d put down my camera.

“London Underground staff at that time would usually try to stop me taking pictures so at first I avoided them where possible.  Later in the project, I began to show staff members the small b&w prints – and then they were often ok with me continuing to work.”

What were you shooting on?
I started with a Nikkormat FTn and later I bought an old Leica M2 and would work with both cameras.

Did you have to shoot in a less conspicuous style?
“I nearly always took the camera to my eye, and I felt ok with this, as described above. Because the lighting on the Underground system generally at the time was dim, I would often shoot with the lens wide open at f2. With these fully manual cameras the chances of getting a picture sharp, if you weren’t actually looking through the viewfinder and focusing, were very low.”

The lighting looks so dark and oppressive, often. Were you pushing the film in this environment?
“I would always push the film two stops.  I found that I could get printable negs if I exposed Tri-X or HP4 film at 1600 asa and then over-developed the film in D76.

Did you see many other photographers shooting at the time?
“In all the time I spent on the Underground I only once saw another working photographer. The only other people down there with cameras were tourists, and they weren’t taking pictures.”

When did you see the Tube start changing towards the system we see today?
“When I started my project, the Underground system had lacked investment over many years. Most stations were poorly lit and there were water leaks all over the place. You would often see a bucket strategically placed in some corridor or platform for weeks at a time.

“In the early 1970s, fluorescent lighting began to be installed on most platforms and corridors which made a huge difference to the lighting levels. But major investment in the underground system really began after the Kings Cross fire disaster in 1987 when a discarded match falling on poorly maintained wooden escalators caused a fire that killed 31 people. The authorities recognised that the system could be lost altogether without major and strategic investment. Since then there has been major change and it is still ongoing.

Do you still shoot on the Tube?
“Not really, although I did some work down there covering social distancing at Bank station for a short film I was making about lockdown.

Are you still shooting film?
“I shoot digitally both in stills and film and I value the additional flexibility that modern digital cameras offer. Working professionally, you need to keep up with the evolution of technology and I traded in my film cameras for digital equipment in the late 90s. Now, my only film camera is an Olympus OM-2 with three Zuiko lenses that I inherited from a member of the family.  The camera and lenses are beautifully engineered and still a joy to use for the occasional project.

Do you miss the old Tube system as a photographic playground?
“I experienced the Underground as a photographic training ground more than playground. I was learning my craft, looking for interesting moments. Going through my contact sheets at the time, I could see that on some days I’d have several good images on the same roll of film and on other days there would not be much on several sheets.  It was a realisation that to make good images was as much about raising your own awareness and sensitivity to your surroundings as it was about seeing what was unfolding in front of you. I was keen to improve my success rate and this project gave me early pointers about the way I wanted to go.

“Living in London, I continued to use the Underground all the time. Now, Covid-19 and social distancing has emptied the Underground, with current advice to avoid public transport where possible. When or whether the Underground will return to what we knew, it’s too early to say!”

I enjoyed the article and photographs. I’m pleased Mike included some place/date details. I know photographers are reluctant to talk about individual images giving context (the image has to stand on its own…) – but sometimes a little background adds to things. I’m curious about his lenses – I’m thinking 35/50mm – it is relevant because you get a sense of how close he must have been. Thank you for sharing.James

Great interview and photos. I ordered the book.