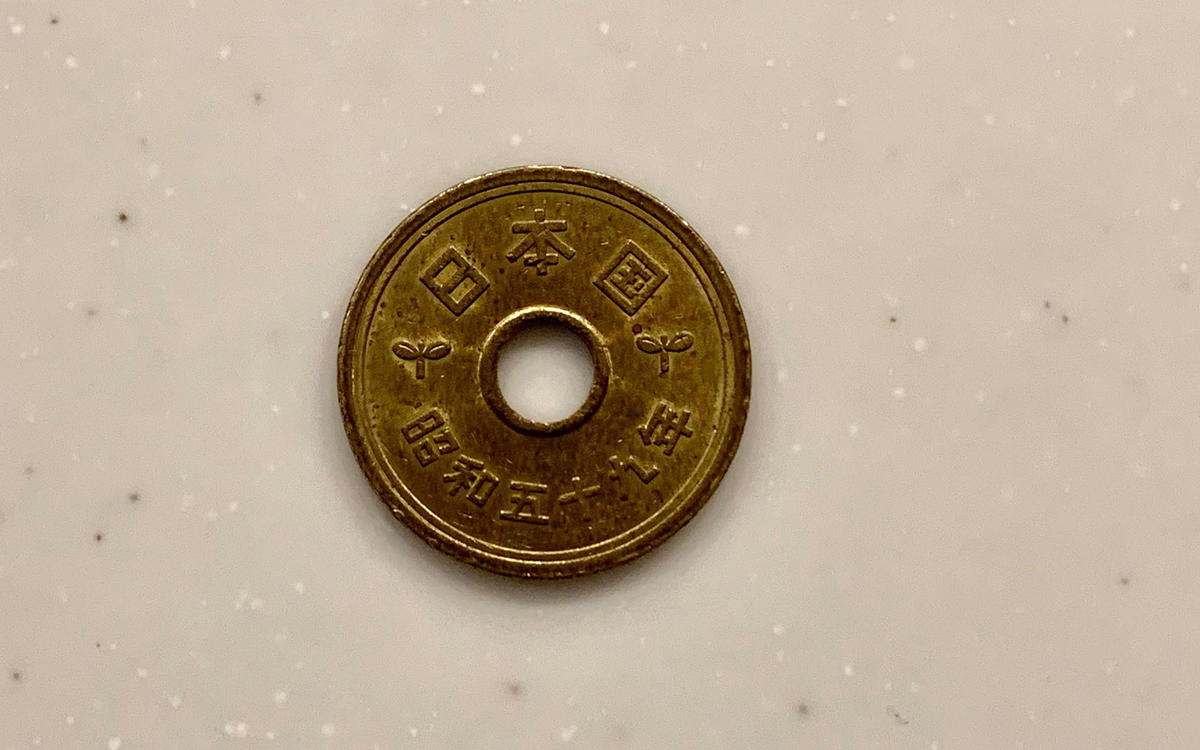 The Japanese language is full of wonderfully untranslatable words, a few of which are particularly useful to photographers.

Another delightful word is go-en, which describes the seemingly random encounters which can lead to long, rich relationships. As this site explains: “Ask people how their career started, how they met their partners or how they found that perfect piece of furniture. Most answers would probably boil down to a mixture of perseverance and luck. Japanese people would say “Go-en ga arimashita.”

“Go-en”, as it happens, sounds exactly like the Japanese word for the five-yen coin, go en. The coins are therefore regarded as very lucky – they’re traditionally placed in the collection boxes of Shinto shrines. There’s even a custom to put a five-yen coin in a new wallet before you put any other money in there.

Should you, as a film camera user, be given a five-yen coin, you’ll find it particularly useful. The coin perfectly fits the groove in the battery compartment – meaning you can open it without damaging the cover – and the size is standard across all the camera makers, just like the hotshoe.

Camera Go Camera’s Peggy Marsh, who used to live in Japan, tells Kosmo Foto: “I have read in many places that a variety of coins can be used to open the battery compartment of an SLR, but when I was living in Japan I was told by a few fellow film camera lovers that the five-yen coin was the best.

“I was always curious about this and looked through a variety of camera manuals on Butkus and nowhere do they specify a specific coin. They even show a variety of coins in the photos. But a five-yen coin was recommended a few times to me. Why that coin? Now, I only have anecdotal evidence, but I can understand why they thought the five-yen was the best choice.

“For me, it is the best choice for the symbolism and for the fact it has a handy hole in the middle and can be attached to a keyring. That means I am never without a coin that does indeed fit perfectly. So there is no chance of me damaging the battery cover trying to get it open by other means.”

Japan Camera Hunter’s Bellamy Hunt also told Kosmo Foto that the  story about the five-yen coin is widely known by Japanese photographers – many attach one to a keyring so they always have one to hand when out shooting. But he says he’s not been able to find any proof that the battery cover groove was standardised to fit the coin.

If it turns out to be a coincidence, that won’t do the five-yen coin’s lucky reputation any harm at all.

Not a ¥5 story, but one about a ¥500 coin … I was browsing in a typically tiny Ginza camera store, looking at some amazing cameras, all of which seemed to be priced as if they were almost new.

But there, in the bargain bin, for a grand total of ¥500 was a Canon Canonet, in lovely condition. For that price I simply couldn’t leave it behind, and I’ve left the ¥500 price sticker on as reminder.