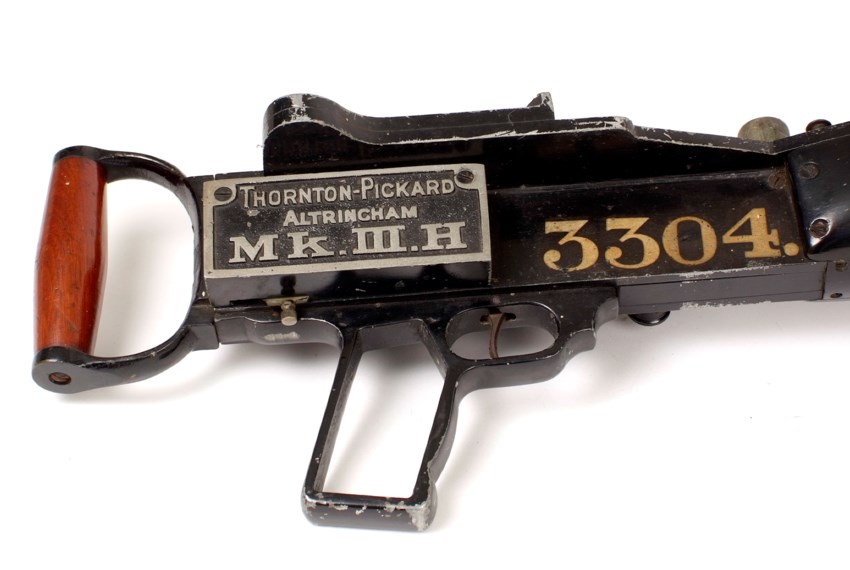 A gun camera used to train aerial gunners between the two World Wars is going up for sale at an auction in the UK next week.

The Thornton-Pickard Hythe Gun Camera Mark III was designed to look like a Lewis machine gun, a gun often used in British military aircraft of the period.

The shutter in the camera is operated by a trigger – just like a real machine gun. It shot pictures on 120 roll film.

The gun camera, which comes with a  removable 120 film holder, is being offered for auction at Aston’s Auctioneers’ latest camera and photographic auction, which takes place in Dudley in the UK on Thursday (28 November)

The cameras were first produced in World War I by Thorton-Pickard in Altrincham and were available to buy commercially after the end of the war. Some of them were still in use in a training role until the outbreak of World War II. The complete camera even came with a dummy magazine – the Lewis gun stored its ammunition in a large drum magazine on top of the weapon – to make it feel as lifelike as real guns.

Aston’s does offer the following warning to anyone planning on adding it to their collection: “Not recommended to be carried in public!”

I can see why it could be a problem if carried in a public place!

Can it still be used to photograph?