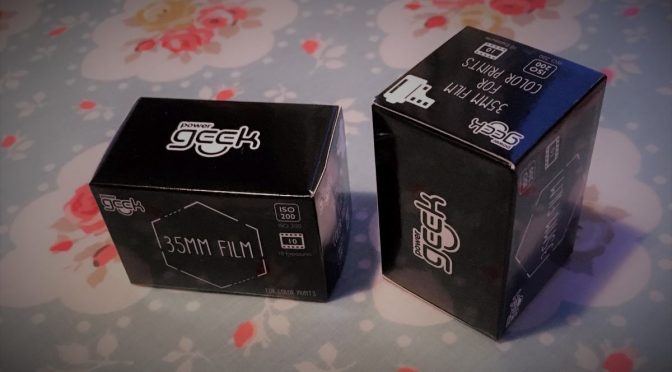 For UK film photographers with a strict budget, there’s some good news from one of the high street’s most wallet-friendly retailers.

Poundland, which has nearly 900 stores across the UK, has recently brought film back to its stores with its new offering, Power Geek 35mm film.

The film is 200-ISO colour print film (most probably Fujicolor C200), and comes the chain had to drop Agfaphoto Vista 200 from its roster in 2017 when the film was discontinued. That film was available in 24-frame rolls for under £1.

However, the new film is not such a bargain, as blogs such as Canny Cameras has reported in recent weeks. The new Power Geek film costs £2 a roll but boasts only 10 frames. (Note: the film isn’t currently listed on their website.)

As far as Kosmo Foto is aware, no current film is available in such small quantities. Has the film been bulk-loaded, possibly from disposable cameras?

Photographer Rick Davy approached Poundland for comment but got no more information than what was printed on the box. “ISO 200, CN-16 processing and 10 exposures, yes, 10 exposures. That leads me to believe that these films might of been destined for the disposable camera market judging by the plastic casing they sit in. I reckon Poundland bought up the stock and badged themselves.” (Read his blog post on his experiences with the film.)

CN16, incidentally, is Fuji’s in-house designation for C-41 processing, which also adds weight to the speculation that this is a Fuji colour film.

The Poundland launch has been met with some criticism by UK film photographers, with some pointing out labs would most likely charge you the same as they would for a 36-exposure roll when it came to developing and scanning it.

Canny Cameras echoed this view, noting that the film would still cost as much as a 36-exposure roll when it came to being processed and scanned, working out three times as expensive per frame as some other 36-exposure rolls available in high-street chains.

This seems a strange move by Poundland, who gained significant kudos when they sold Vista 200 for such a low price. Given the deals such a large retailer is able to strike with distributors, it’s odd that they’ve gone with such a low number of frames.

Why not charge a little more for a 36-exposure roll? After all, it’s not as if they’re selling this stuff for only £1.

Perhaps this is the only form they can get Fuji 200 in now? I know it’s completely disappeared from stores in the US

While I understand that the cost is high for 10 exposures, a small number of exposures does have one advantage – you can test a used camera relatively quickly instead of using a 24 exposure role

It may be decent value if you want to run a test roll through a half-frame camera. Niche product though!

I’ve paid 1gbp for it in my local Poundland

One Year Ago This Month… – Photographic Jannine

[…] all doom and gloom though, around two years later another film brand would take its place called Power Geek, but it is far from a […]

I’ve bought a lot of this film in its ISO 100 form (Can confirm it’s actually Fuji C200) and hand developed it all due to the crazy full cost of exposing 10 images. It reminds me of when I used expired and poorly handled 16/35mm Kodak cine stock from the 80s/90s: horribly grainy and shifted heavily towards dark shades of blue. To confirm these issues I did have a roll processed at my local photo shop and got nearly exactly the same outcome. I’ve decided it’s cheaper and less stressful in the long run to just use other cheaper stocks… Read more »