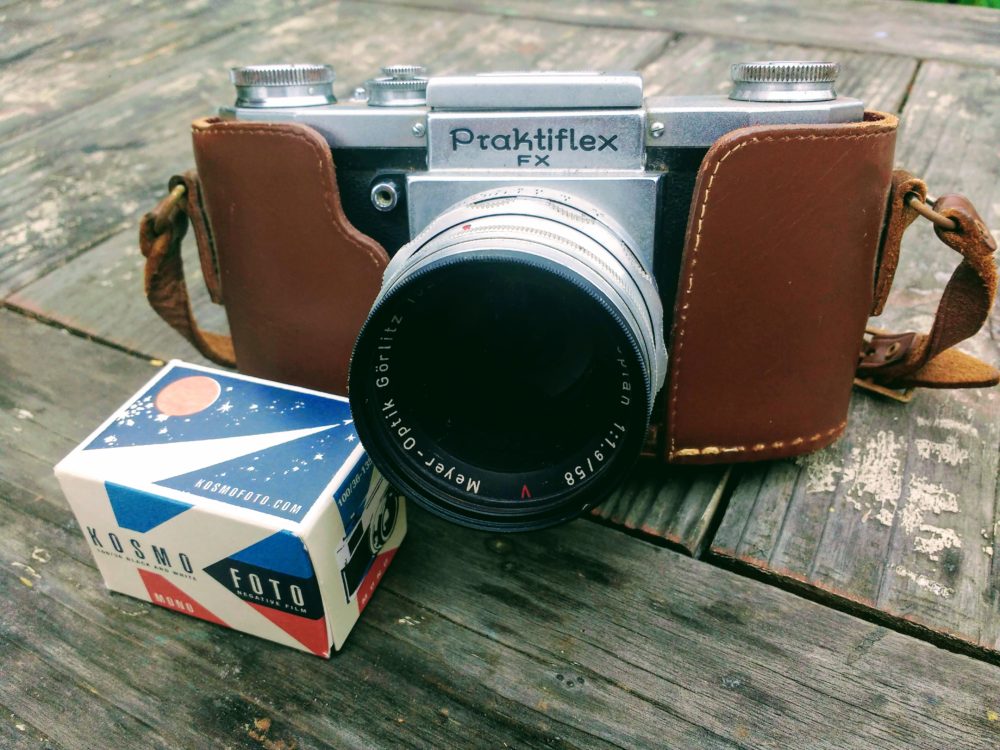 I never had any interest in Iron Curtain (or iron shutter cameras). Out here in California they were never especially abundant, until the advent of LOMOgraphy. And they have never been “cheap”, like they are in other parts of the world.

Even if I found a $10 Eastern Bloc camera on eBay by the time you add on international shipping charges, I was always better off grabbing a $30 Pentax or Minolta with free shipping.

Anyways, a few months back a friend of mine had a camera he wanted me to sell for him. I told him to bring it on over and we could have a look. So he brought over this vintage brown leather case that hipsters would drool over and it was a Praktiflex FX M42 SLR.

Attached to the body was a 58mm f/1.9 Meyer Optik Gorlitz Primoplan Lens. I took a look at the whole thing and said it was probably worth about $50-$80. I told him I would run a roll through it to test it and then post it for sale on eBay. I threw it in the closet and forgot about it for a couple weeks.

When it came up in the rotation (There is always a rotation at least three cameras deep) I decided to do a little research. Turns out this camera is pretty old and the Praktica brand has a history all its own.

The body alone was actually somewhat valuable. What was even more surprising is the lens. The Meyer Optik Gorlitz Primoplan 58 is an extremely sought after vintage lens that can command a pretty steep asking price. People adore the bokeh it is able to produce. It’s the swirly, soap bubbly stuff that people go gah-gah over. The mostly use them on modern mirrorless cameras to give their digital shots a vintage look, which is both laughable and brilliant at the exact same time.

On the surface it’s simple camera and I like simple cameras. Shutter speeds B-500. No meter. Waist-level viewfinder with a pop out magnifying glass. Full control of aperture on the lens. I like a bit creative constraints and felt very comfortable with the spartan feature set. I loaded it up with some Kosmo Foto Mono so I could Sunny 16 and do the damn thing.

Setting the shutter speed was simple, winding the camera was simple. The camera did a good job of staying out of your way as far as exposing an image. I even liked the fact the mirror doesn’t open up until you wind the shutter.

But I quickly realized how much I dislike waist level viewfinders. I have had a few of them and I have always had a bitch of a time composing my image with them. I like straight lines and for me, that’s nearly impossible. And you might as well forget about shooting any verticals.

So right away I had to change my subject matter to something that didn’t require as much linear control of the compositions. So I ended up shooting textures and abstract stuff to mitigate the issue. The other problem I had with the camera was the focusing, even with the pop out magnifier it was very difficult to see if your image was in focus. 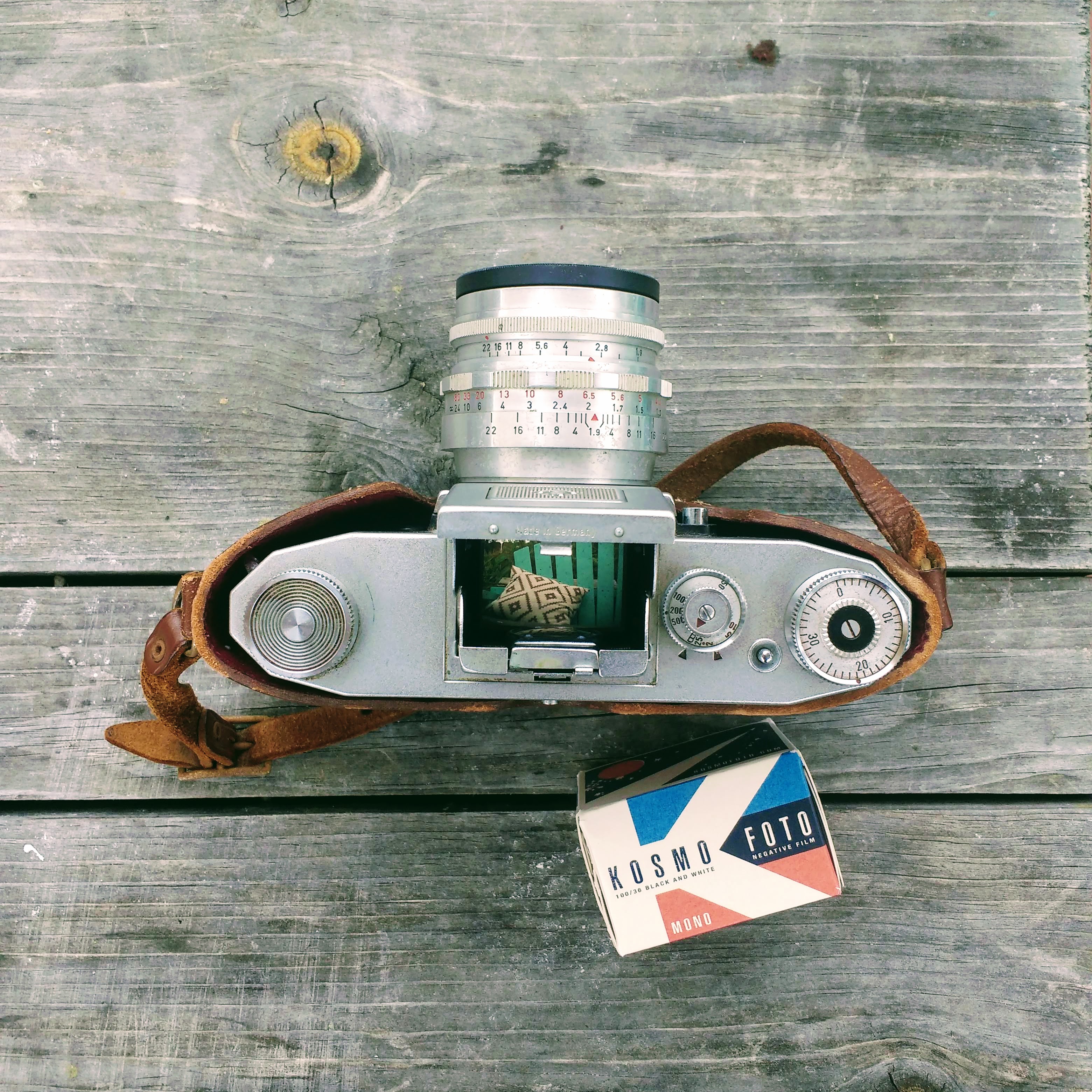 Once I got going I started using scale focus the majority of the time and stopping the lens down for a bit more depth of field. Basically I was hedging my bets to try to get things in focus. As a result I didn’t find many circumstances where I felt comfortable opening up the lens and seeing how that bokeh looks.

Shooting mostly in bright hazy fog, the majority of the shots were taken at 1/125-1/500 and aperture of f/5.6-f/11, leaning towards overexposure. The ones that came out look pretty good. Almost every shot had a darker area on the right hand side of the frame. There is some sort of shutter error with the camera because 60% of the shots came out like the last one with a portion of the frame actually being unexposed.

Focus is inexact as expected and the composition could be a little better but overall they aren’t that bad. I continue to be impressed by how the Kosmo Foto Mono film handles the overcast weather typical in Southern California during spring and summer.

Camera: Would I recommend one? If you like shooting with a waist level viewfinder and are comfortable with manual exposure, you could do a lot worse.

Would I buy one? No.

Would I ever use one again? Yes, if I had no other option. The difficulty of focus and composition were too much for me to overcome.

What did I learn? It’s really liberating to have an uncluttered viewfinder and have full manual control of making an image. It is my favourite way to shoot B&W and it’s fine for colour too. In fact just give me a regular viewfinder with a split image focusing screen or at least a micro prism and maybe throw in a 1/1000 or 1/2000 shutter speed and I am set. I would also have a Pentax Sv or a Nikon F or a handful of other fully manual cameras from that same era

Lens: Would I recommend one? Again if it fell in my lap I would definitely use it. I happen to like 58mm as a focal length, it’s just a little more narrow than 50 so it feels more intimate to me. It seems reasonably sharp, out of focus areas are pleasant.

Would I buy one? Not at the prices they command on eBay. There are a slew of M42 lenses out there which are very similar and much cheaper.

What did I learn? There is something pleasant about working with old, all metal lenses that provides a very visceral satisfaction. It made me want to shoot more with my other M42 lenses on my Spotmatics.

Film: Would I recommend it? Yes, if you like slow, grainy black-and-white film with a really good range of midtones it’s great stuff. I put it in the same category as Ilford FP4+ but with a touch more grain.

Would I buy it? I already did and I have been shooting this same emulsion for years, but I will continue to purchase it in the future.

What did I learn? Slow black and white film is a world all it’s own. I am trying to think of a project that I can do just using a film like this. 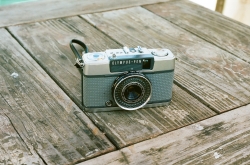 Dan Marinelli
I've been shooting film on and off for 20 years. My work is a bit of a compromise between landscape and street photography. I am more of an anthropologist or cultural geographer than a photographer per se. While one rarely sees a person in any of my photographs, traces of humanity are omnipresent. The fingerprints society leaves behind, provide evidence of its impact. I am especially interested in the roughly defined line between nature and civilization, as well as man’s attempts to harness its beauty. Naturally, this means I am also a bit of an archivist and historian. Southern California had seen more development in the last 100 years than anywhere else in America. The world of my childhood is rapidly eroding and my vision of San Diego is altered on a daily basis. As people bring different values, ideas, and visions to the region, they physically change the landscape as well. I enjoy documenting these changes and taking little snippets with me. I almost always shoot at eye level with a lens to closely mimic the human experience.

As a half-frame camera enthusiast, I founded http://www.halfframeclub.com back in 2016 to function as a community hub for half-frame film photography and we've been chugging along quite well since then.