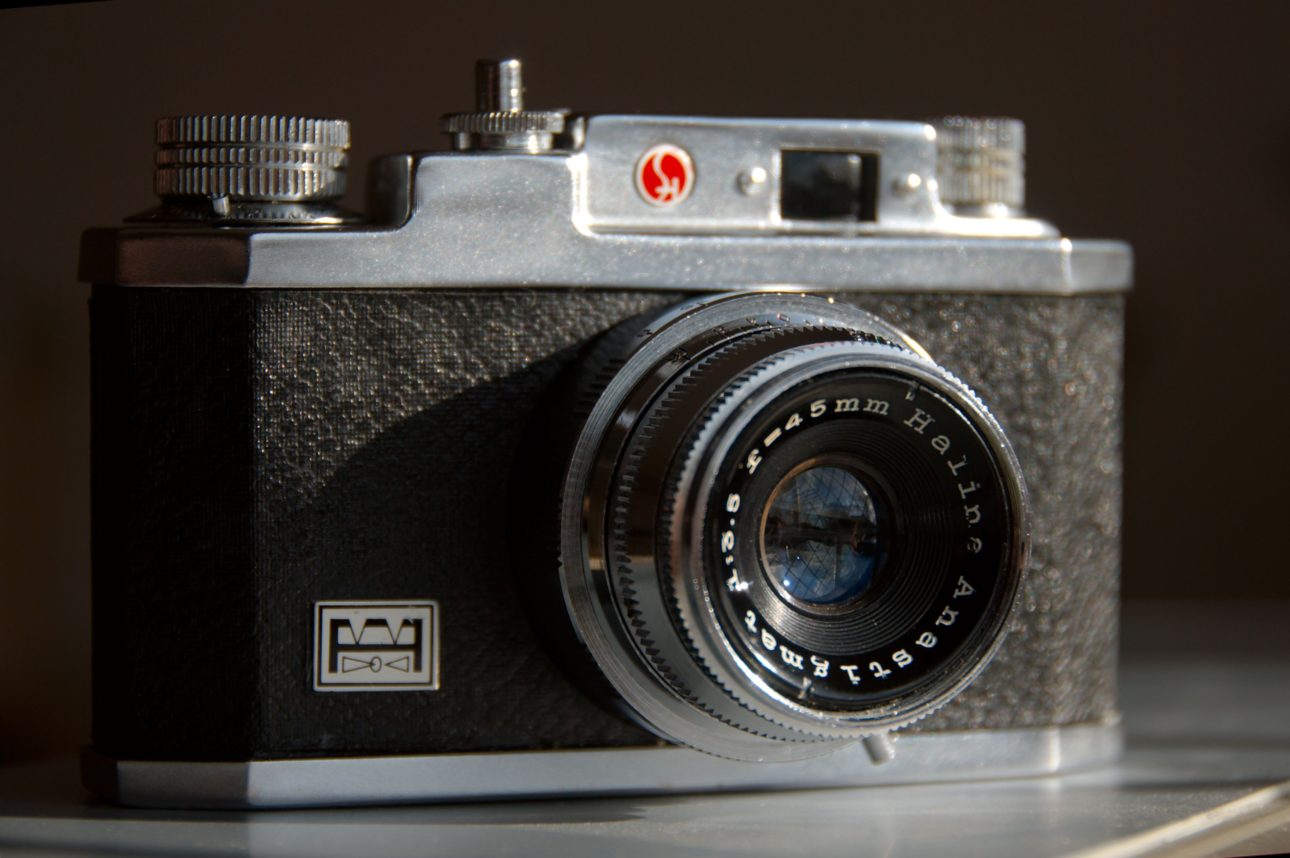 Is this the worst 35mm camera ever made?

In the 1950s, a new camera company appeared in the Far East. Called Haking, it was based in Hong Kong, which was emerging as a major producer of cheap goods amid post-war economic recovery. People had money to spend, and many of them wanted to take pictures. The camera market was a big pie, and Haking wanted a slice.

The cameras that Haking created were sold under the brand name Halina (one which survived well into the 21st Century). Its cameras included the Paulette Electric, a cheap and simple-to-use viewfinder camera that was extremely popular in the UK. Another decent model, the 35-600 was a compact camera very similar to the Olympus Trip 35, and pretty capable for its price.

But Halina also came up with their fair share of cheap-and-not-so-cheerful duds. Even today, one of their cameras still has an unenviable reputation for poor quality and shoddy design.

This late-1950s model was heavily influenced by a Japanese camera called the Ranger 35, a cheap viewfinder camera with a fixed 40mm lens and a detachable back. Perhaps the Ranger 35’s makers, Nihon Seiki, gave Haking the blueprints or perhaps it’s one of those sincerity + flattery = imitation scenarios. Anyhow, Haking’s camera looked very similar to the Japanese camera. Very similar indeed.

The Halina 35X boasted a 45/3.5 Halina Anastigmat triplet lens, a removable back, shutter speeds from 1/25 to 1/200 (plus, drum roll, B), a 36mm filter mount, a dinky little case and even a lenshood in it own faux-leather pouch. What luxury, I can hear you crying.

The Ranger 35 was hardly a champion in its own right (this review sums up the experience of shooting with it thus: “It’s more an object to look at than a camera to produce anything worth seeing.” Ouch.) But Haking appeared to have regarded it as something approaching Leica-like luxury, and done their best to come up with a poundshop equivalent.

The Halina 35X certainly isn’t an ugly camera to look at – it’s small, and its knurled advance and rewind knobs are in keeping with 50s camera style. There’s even a red emblem proudly sporting the Halina name (a camera marque on a red background – where have we seen that before?). And what’s this underneath? “EMPIRE MADE” embossed, possibly in a patriotic attempt to part pounds, shillings and pence from the good folk back in the Mother Country. 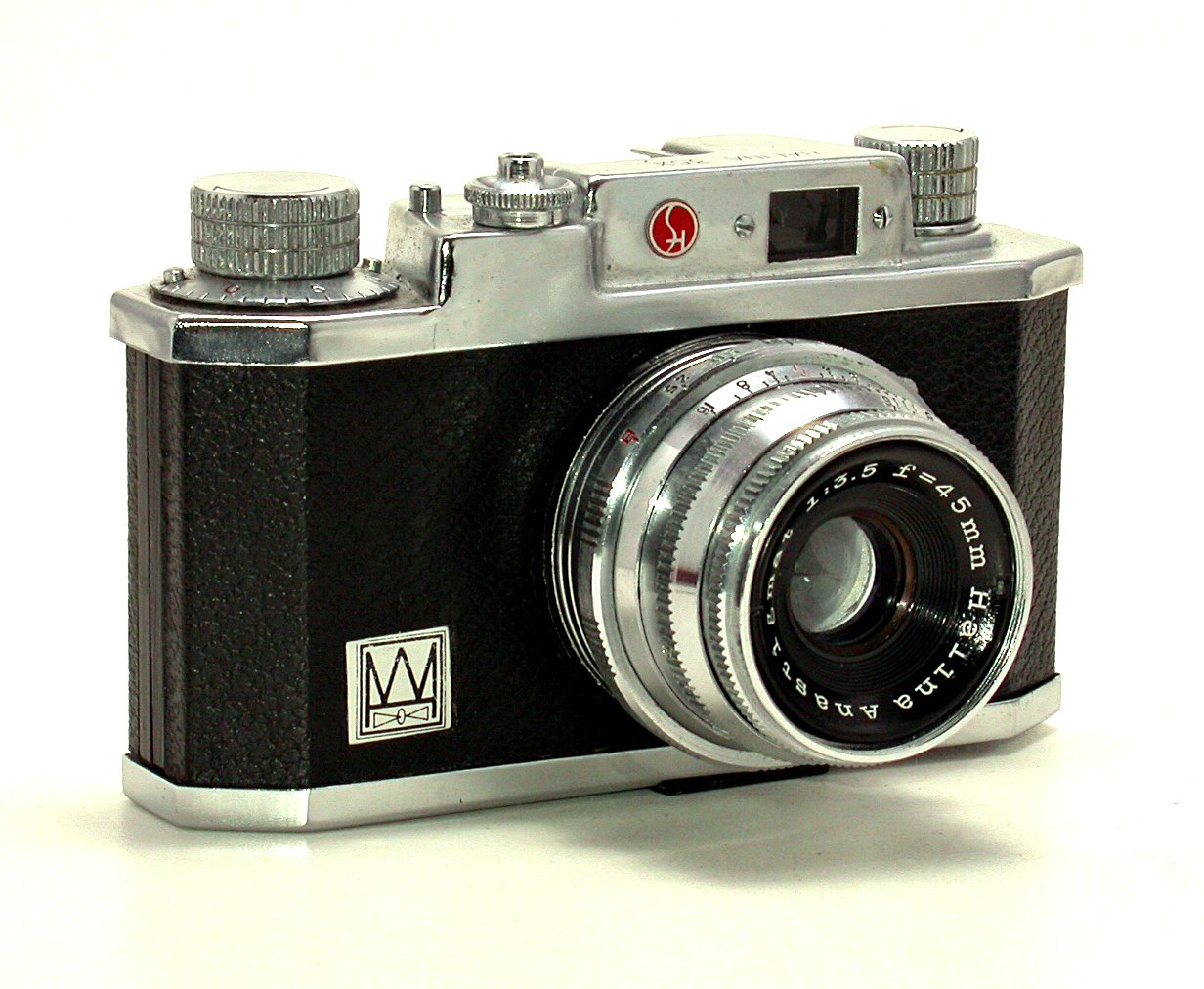 The first clue that the 35X is not on a par with your Voigtlanders and Nikons is the finish. The camera’s almost entirely metal, but the finish looks like someone has sprayed metallic paint on a plastic toy camera. And here’s the other things – the 35X is remarkably heavy for its size. You just don’t expect something this small to have quite so much junk in its trunk. The overall impression is one of those cheap plastic SLRs that has a lump of lead in the bottom to fool people into thinking they’re buying a hi-spec model.

Detachable camera backs were pretty common in the 50s – don’t forget that this is the era of the early Leica Ms, the Holy Grail of camera ownership. Once you’ve unscrewed the back and slotted in your film, it’s time to shoot. And here’s where the problems start mounting up.

The 35X I own (for research purposes, you understand) is approaching pensionable age, and you’d expect some stiffness in focusing as the lubricants dry up. But this was, apparently, an issue even when the cameras were new. Check out forums discussing this camera and you’ll see people complaining about the “Olympian” strength needed to move the lens. Whatever Haking packed inside the lens to keep it lubricated, it’s unlike anything found in any decent lens.

Many camera makers worked out ingenious ways to show the distance setting in the viewfinder. Haking decided against this.

The 35X’s images are particularly soft and indistinct, and as prone to flare and aberrations as the plastic lenses of a genuinely low-end toy camera

Assuming you’ve managed to grind the 35X’s lens to the desired distance, here’s where the next issue raises its head. Triplet lenses are so named because they boast three separate glass elements in the lens – probably the bare minimum required to get decent results.

Even the triplet lenses in cheaper Soviet cameras like the Smena 8M and the medium format Lubitel are capable of excellent results, if you don’t mind a little bit of fall-off in the corners. The trick is that all three elements have to be coated to improve contrast and bring flare down to a minimum.

Meat Loaf sang with characteristic sweaty gusto that two out of three ain’t bad. It’s a fair assumption that he never designed any lenses. I don’t know what Haking’s excuse is though – they coated two of the 35X’s three elements, but not the one in the middle. This means the 35X’s images are particularly soft and indistinct, and as prone to flare and aberrations as the plastic lenses of a genuinely low-end toy camera.

And you want to take a picture? The advance knob moves the film one frame but then you have to separately cock the shutter with a lever on the lens mount. It’s the kind of movement you get used to shooting TLRs and folding cameras but not on a 35mm viewfinder camera at the cheaper end of the market. These cameras should be the definition of easy-to-use.

“The quality of the camera is really – interesting – to put it one way,” the blog Filmwasters wrote in their review. “It’s so ‘loose’ and ‘un-camera-like’ it gives the feeling that it must be a facsimile of a camera, rather than an actual camera.”

The Halina 35X can be bought on eBay for as little as £7 ($10), which is less than the camera cost when it was new, though you’ll pay considerably more for one in its box with all its fancy-pants accessories. It’s thought it was in production for a decade or more, so they’re not exactly rare – though the ‘Empire Made’ slogan means it’s much rarer in the US than the UK or Canada.

The 35X’s surprising heft makes it a must-buy – as a paperweight. As a bonus, you might even be able to get some pictures out of it too.

A very interesting review. I enjoy reading your blog a lot. The pictures John posted have so much character that I really like them. Could this be the next Holga? Thanks for sharing.

I grew up in the UK and I remember the Halina 35x that my father bought in the late 1950s. The photos he took with it were reasonable, much better tha the Box Brownie produced. I’ve recently scanned some of the negs produced at the time and my nephew had one of them enlarged to A2 size to hang on the wall. So, not bad, particulalry for its time. It was popular because it was an affordable camera that produced acceptable results. To criticise it in comparison with later cameras is unfair. Britain was just starting to come out of… Read more »

One of these was the first 35mm camera I had. Sure, it had its flaws but it was quite usable and produced reasonable results for what it was. You have to bear in mind that cameras of better pedigree were much more expensive back then. We’ve all been spoiled since, by relatively cheap and very well made Japanese cameras flooding the market from the 60s onwards. The venerable Halina survived as a family camera, to be used from time to time, long after I’d moved on to a Nikon, indulging an interest in photography which wasn’t sparked by the Halina,… Read more »

The Lada of The Camera World OR NOT ?- The Halina 35X Review - Canny Cameras

[…] of the lens does become apparent. The failure to coat the middle element doesn’t help as Kosmofoto’s Review of the 35x explains. I’d agree with Simon Dowling’s view re the lens becoming soft at below f/8 so by and […]