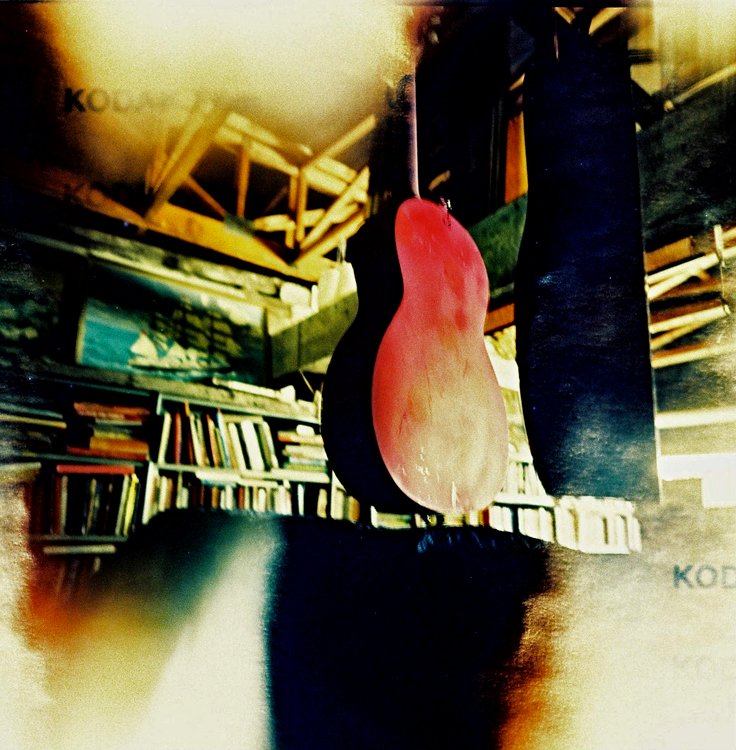 I shot this in Dunedin, New Zealand in January; I’d ducked into a secondhand bookstore/junk shop on a long walk from my friend’s house to the beach at St Clair.

It was a blazing summer’s day, the sun a burning, infernal presence on the streets outside. Inside was a picture of Sunday calm, a nostalgia of shadows and stacked magazines, old book smell and quiet. The occasional car whispered by, the sound muffled by the displays covering the windows.

I shot these guitars hanging from the ceiling, having loaded my LOMO LC-A 120 with Kodak Ekatchrome to cross-process – one of the best films to cross process, as it creates contrasty, saturated pics.

The only problem? When it came to unloading, the film unravelled a wee bit, meaning light was able to leak in around the edges. It isn’t, as LOMOgraphy detractors might first think, the fault of the camera. I’ve put at least 25 rolls through this LC-A 120, and never had any issues with lightleaks, even if I’d wanted them.

Had this been portraits or a carefully framed street photo, I might have been annoyed. But this Holga-like psychedelic colour adds something. The bleeding light appears to have, completely by accident, surrounded the guitars – a frame within a frame.

The bleeding Kodak name, coming through the backing paper is another happy accident, just discernible through the blazing brightness leached onto the film. It almost looks like something I could have found there, a crazy, artistic experiment left to languish on a junkshop shelf.

That’s a pretty cool photo regardless of the mistake. My uncle loved playing his guitar and I think he would have liked this photo too.

In love… leaked effects are creative ?