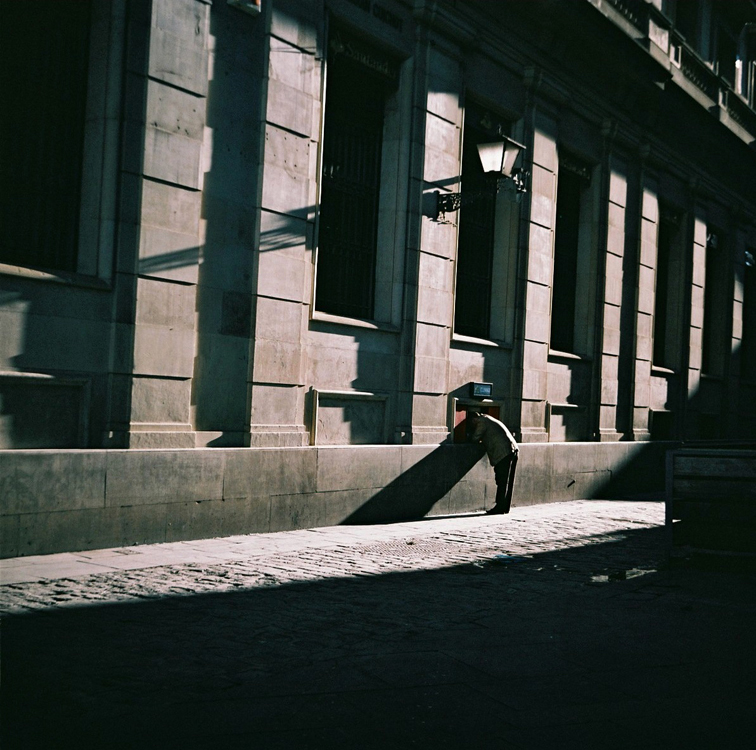 November is a good time to leave London, even if it’s only for a few days. Head a few hours south by plane and there’s still some sunshine to soak up; the last reminder of the summer that just faded away.

This was taken on a November long weekend in Seville; the sunshine’s strong but the sun still slips below the horizon fairly early. By 6pm the night has begun to descend.

Seville’s centre is arranged around its cathedral, the biggest in the world, and nearby are grand commercial buildings from the first half of the 19th Century. There’s an imperial splendour to the city, a refined hangover from the days of Spanish empire.

The afternoon was late, and the shadows were lengthening. I spied this man using the bank machine in a cobbled street raked by late light.

Much of my travel shooting is done on 35mm SLRs and compacts, but on this afternoon I was using an old Soviet Lubitel medium format TLR. The LOMO-made Lubitel was made in million after million in Leningrad. Based on an earlier, post-war camera that was a copy of Germany’s Voigtlander Brilliant, which came out in the 1930s. Lubitels were steadily upgraded until the final model, a mostly plastiuc version called the 166 Universal. I’ve mucked around with a few older Lubitels from time to time, but this one seems to have given me the most consistent results.

I love teaming old cameras like the Lubitel with film that’s long past its best-by date. While I wouldn’t call the Lubitel a toy camera (the lens is glass, and can give cracking results), it’s not exactly hi-tech. Last year I found a brick of old Agfa Optima 100 on eBay; I’ve shot a lot of expired 35mm Optima and in bright light it can give some really dreamy results.

The good thing about TLRs is that it’s very easy to take candid shots; the shutters tend to be incredibly quiet, and the whole action of framing and focusing at waist height means most people wouldn’t even guess you’re taking a picture. A glance down, a quiet click, and the scene is captured.

There’s another reason why old film seems to work for a shot like this; that desaturated colour and reddish tinge creeping in almost gives this a sepia look. There’s nothing in this shot that screams 2015, or Spain. It could be a street scene from Prague or Budapest or Vienna, many decades ago. A bending figure against a building, somewhere in an old-school Europe.

Beautiful shot! You’re right, it is timeless and anonymous. Could be anywhere, at any time. Great work in capturing it.

Very Impressed! When I first saw this, I thought it could be a Kodachrome taken in the 1940’s. The content having a nostalgic element to it definitely helps the illusion!

I went to Seville a couple of years ago and got some brilliant shots on digital. Definitely need to go back and use my Zenit E! Great shots Zorki

The Neufraten! Do it – it’s such a photographic city.