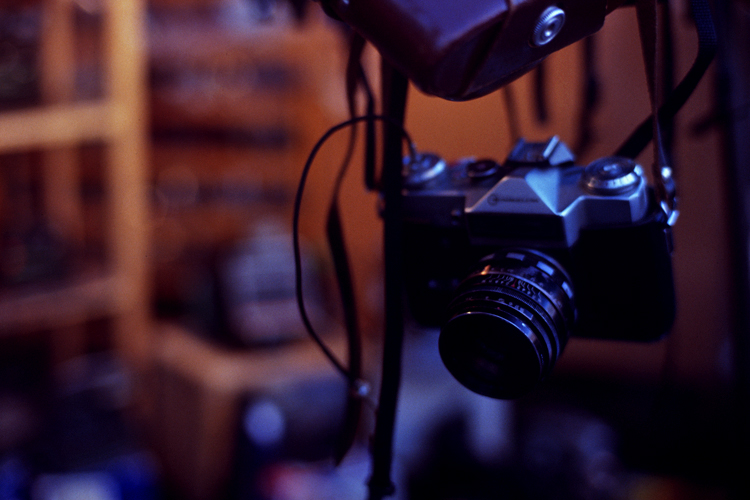 Kosmo Foto has been running since 2012. It’s a celebration of film and analogue photography. I’ve been shooting seriously since 2000, and over the last 15 years or so, I’ve shot on all sorts of different cameras, and taken them on the road across Europe, Russia, the US and elsewhere.

If you’ve not looked at the blog before, or not seen what’s been published for a while, here’s a list of some of the highlights of the blog so far.

Five film cameras for under £50

I buy old film cameras, and I love it when they cost next to nothing. I have a cabinet full of working cameras for what a Hasselblad and a standard lens might have cost me. This is by far the most popular thing that’s ever been run on the site. The list here includes the Zenit E, which you can get for about as much as a roll of film these days, and the Olympus 35RC, a beautiful little rangefinder that comes with a kick-ass lens; they used to call it the ‘poor man’s Leica’.

I review the cameras I’ve been using over the last 15 years or so. The little Soviet LOMO LC-A was one of the cameras that kickstarted my love of film. Now, a LOMO or similar is always in the camera bag when I head away. These are the perfect compacts to use if you’re wanting to experiment with using expired film or cross processing.

This is the camera I use most of the time when I travel. It’s a beautiful camera, the last of Pentax’s amazing Spotmatic line, upgraded with aperture priority which makes it great for shooting on the hoof. If I have to shoot on one 35mm SLR for the rest of my days, it’s this.

The weird and wonderful world of Soviet cameras

Since I was a kid growing up in New Zealand, I’ve been fascinated by the USSR and Eastern Europe in general. When I got into film photography, I then realised how big the Soviet photographic industry was. Seriously – they made a lot of cameras. This is a brief snapshot of Soviet camera development and some of the notable cameras they made – several of them were truly ahead of their time. And yes, most of those I talk about I have.

I moved near Greenwich in south London a few years back; there’s a great antiques store there called The Junk Shop, full of all kinds of treasure. I found a stack of old Kodachrome slides form a photographer who had recently died. They were taken in Morocco in the early 1970s. It turns out, these pics were shot by Peter Fordham, the man who had taken many of the pictures for John Lennon’s ‘Imagine’. A few months later, I travelled to Morocco. It was amazing how little had changed.

Istanbul in black and white

My favourite city in the world is Istanbul. It has everything; almost unequalled history, amazing architecture, great food, energy and a photographic opportunity around every corner. Istanbul lives it’s life on the street, and that makes it an amazing place to take pics. I’ve written several posts on shooting Istanbul; this was from a 2015 trip. If you’ve not gone, book a trip. Now.

When I started shooting seriously back in 2000, all the major film manufacturers were still churning out dozens of different films. Now much-loved emulsions like Agfa Ultra, Fuji Sensia, Kodak Ektachrome and Kodachrome are no more. Film has s use-by date, and if you can find any of these dead emulsions, the rolls are no doubt long past their official use-by date. But this post shows you some tricks to keep shooting with them.

I’ve teamed up with the wonderful people behind Film’s Not Dead to put together a list of tips and tricks if you’re returning to film – or never shot it before. We’re slowly working our way through the 52 tips. Why not start at the beginning? Buying something reliable, manual and inexpensive gives you more money to spend on film.

I’m a transplanted Kiwi, living in London since 1994. I wasn’t so interested in photography when I lived there; pretty much all the photography of my home is since I’ve moved away, and returned for holidays with camera in hand. Here’s what my home town looks like on an old Soviet camera and some random rolls of film.

For years I was a music journalist. It’s what bought me to the other side of the world over two decades ago. Since 2004, I’ve been shooting a project capturing bands at soundchecks on black and white film. So far, that’s included the likes of The National, Manic Street Preachers, Calexico, Franz Ferdinand, Portishead and Crowded House. I’m forever indebted to the wonderful Lambchop – without them, it would never have happened.

Do leave a comment if you like what you see. And please get in touch if you have a question or a suggestion.

Your posts are always so informative and inspiring. Keep doing what you do! And just to let you know, a few of the posts you reference here are missing live links, making it harder to drill down on them. Thanks!

Thank you, Harry! Those links are fixed.

You have done an impressive job. This website of yours is inspiring.
My very first 35mm camera was a Zorki 4, purchased in Great Britain : another reason to love zorkiphoto, maybe ?

Thank you so much – I’m glad you’re liking it. That’s a great bunch of cameras you’re shooting with – an Arax is high on my list, as I’ve loved shooting on my Kiev 60s…

You’re very inspiring and I always learn a lot about analogue photography. I also use old film if I have some in the fridge (also Kodachrome, I’ll develop it soon in caffenol) and camera’s under fifty pounds. Keep writing!

I love your posts too! Lots of info and great images. Where do you think is the best place in London to find film cameras? Maybe a post idea or maybe you have already posted that! Thanks!

That is a lot of wonderful content you have gathered over the years, thank you for sharing it with us. I always enjoy browsing your website, reading your stories and looking at your beautiful images. Cheers!

Thank you so much, Radu – I’m glad you’re still enjoying it. Plenty more to come. I’ve been busily shooting away, testing cameras and travelling.

You have done an impressive job. This website of yours is inspiring.
Very beautiful photos!!!