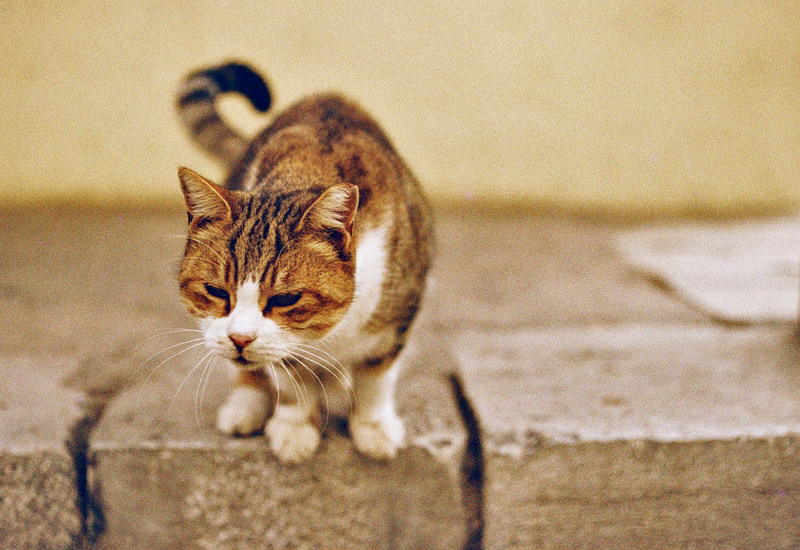 Istanbul is, according to some, the second-biggest city in the world; home to 14 million souls and sprawling across two continents. It’s also home to a hell of a lot of cats.

Even with three visits to Istanbul under my belt, I’ve only seen a fraction of what this vast and busy city has to offer. Even the most tourist-trampled thoroughfares on the European side of the city – like the mosque-bedecked Sultanahmet and the bar-and-boutique-filled Beyoglu – have quiet side streets and overlooked corners. Of every city I’ve visited, Istanbul is the one that keeps dragging me back.

Part of its charm is its cast of cats. Istanbul is a city with legions of felines; some stray and shy of humans, others who’ve perfected the art of ingratiating to earn a treat or two, but most with a distinct lack of fear and friendly attitude.

Islam’s tolerance of cats means even the roughest of strays is unlikely to get  a toe in the behind, and shopkeepers and residents alike turn a blind eye to cats lounging on wares outside their shops or standing guard outside their doors, and now the street cat is an integral part of the former Turkish capital’s character.

Istanbul’s many crumbling nooks and crannies provide no end of hiding places. They have the run of the city’s most sacred sites, including the Blue Mosque and Ayia Sophia – even Barack Obama couldn’t resist petting one of the resident cats at the latter when he visited the sacred site in 2009.

And when Istanbul was celebrated as Europe’s Capital of Culture in 2010, environmental consultant Nukhet Barlas created a gallery of all of Istanbul many landmarks, each with a cat in shot.

There’s a hostel called the Stray Cat, where backpackers can share the couch with friendly moggies, and at Bogazici University in the city, cats are given free reign, wandering into lectures and snoozing on the shelves in the library. Perhaps the tolerant attitude of the city’s residents has relaxed the cats, making them more approachable and amenable.

I’ve had plenty of cat encounters of my own. In 2010, I took a ferry from the European shore to Uskudar on the Asian side of the city, planning to get a quick afternoon’s sightseeing and photo-taking of the other side of Istanbul.  I wandered into the Yeni Valide Mosque, a stone’s throw from the harbour.

I wanted to explore the mosque’s famed interior, but spied a cat sitting next to the pillars in the courtyard. This was no house cat, but a street bruiser – busted ears and a jaw like a cartoon boxer’s. But my attempts to take his pic kept encountering the same problem. Every time I sat down to try and capture him against the mosque’s pillars, he’d make a beeline for my lap. Eventually, I managed to get him still long enough for the shot above.

Ten minutes later, after drinking in the mosque’s beautiful interior, I came out to find two old Turkish men playing with the cat, laughing like kids.

“Cats are lazy anarchists. This is one reason why they conform with us just fine in big cities,” Turkish writer Ozgur Kantemir says. More than five minutes in Istanbul and you’ll know what he means.

Check out more pics of Istanbul and cats.