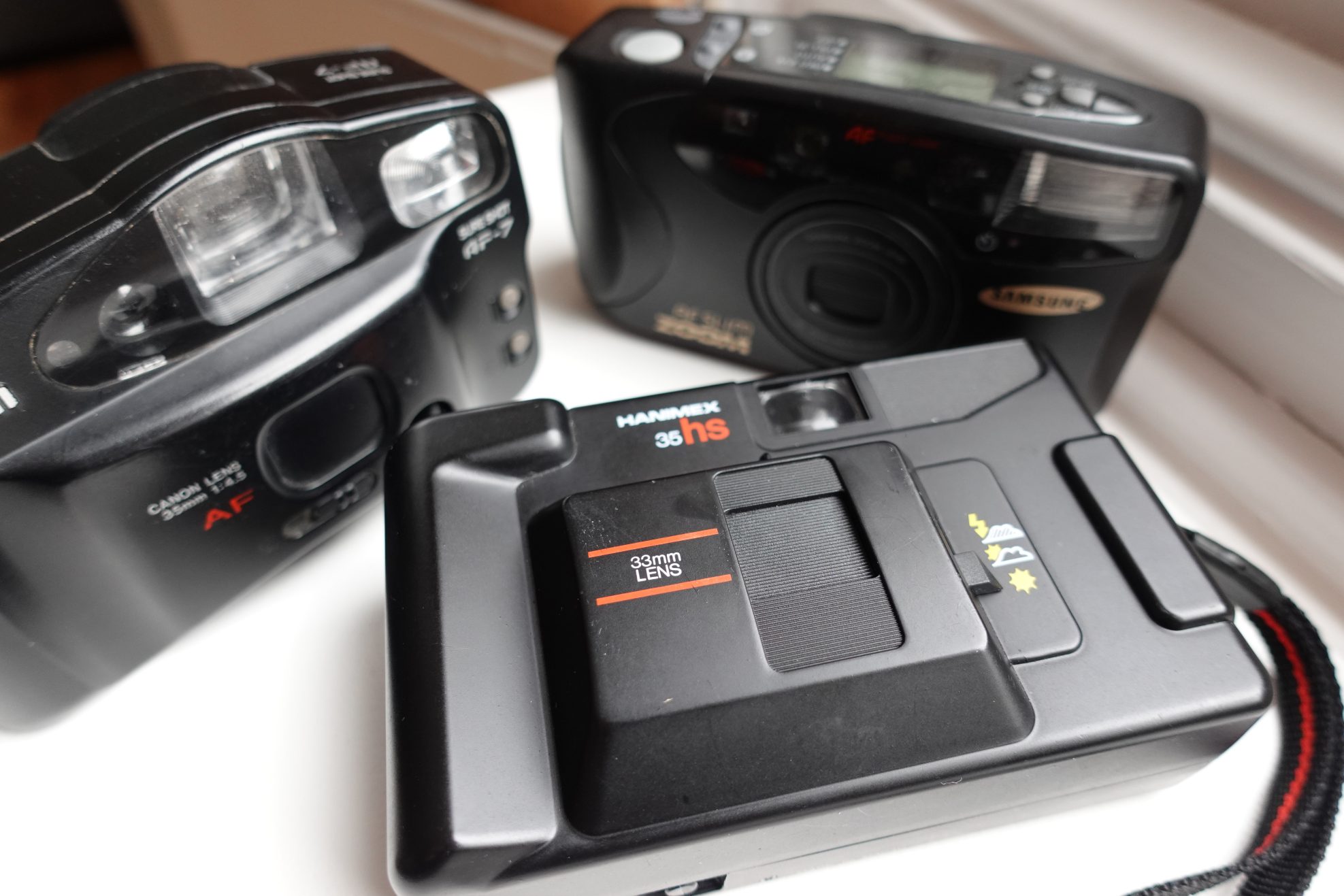 Over film photography’s long reign, thousands of different camera models were produced. A lot of them – whisper it – weren’t much to write home about.

Photography blogs and YouTube list of videos preoccupy themselves with a few hundred desirable models which have stood the test of time, either because of aesthetics or features or some winning combination of both.

But for every Leica M6 or Pentax 67 there are hundreds of others unloved and mostly forgotten, minor models built for bucket-and-spade holidaymakers and beginners who wanted a picture without diving headfirst into a manual or a how-to-learn-photography book. They stayed with us – attracting a few more bells and whistles along the way – right up until the large-scale demise of film camera making.

In the past year Kosmo Foto has started selling used cameras in our online shop. Not many, because sinking tens of thousands of pounds into stock to take on the likes of Ffordes and West Yorkshire Cameras isn’t the name of the game. In buying lots of cameras through various auction, sometimes the camera you wanted comes with four or five you didn’t. Sometimes they even still work.

Almost all of the cameras that go on the shop are film-tested to make sure they actually work, and aren’t just making the right noises. Alongside some actual classics like the Olympus OM-10 and the Pentax Spotmatic have been a myriad of compacts. We’re not talking the likes of the Contax T3 or the Yashica T4, or even the cult Olympus Trip 35; these are the kind you’ll find forlornly laid out on flea market tables or gathering dust in charity stores. Some are rarely remembered basic models from the major manufacturers, others from the footnotes of the film camera era.

Many of these cameras offer little more than a single shutter speed optimised for colour print film and sunny days – sometimes even a lens made out of glass is out of the question. A few others turn out to be remarkably good models deserving of more attention.

Here’s the first in a series of round-ups looking at some of these cheap and cheerful and some results from them.

The Canon AF-7 was one of tidal wave of compacts released in the the Sure Shot range by Canon from the 1990s. Some, like the Sure Shot Supreme, are proper 80s throwbacks, with a rewind function which sounds like someone dropping a cutlery set into a waste disposal unit. Others, like the slimline Sure Shot Max or the chunky Sure Shot Zoom XL, are much, much better.

The AF-7 was one of the first AF compacts to feature a giant viewfinder for its wide-angle lens. The view is certainly dramatic – no squinting through a tiny window here – which certainly makes the camera pleasing to use.

The camera’s 35/4.5 Triplet lens won’t encourage many fulsome tributes, but it’s sharp where it needs to be. The AF-7 is pure point-and-shoot, requiring nothing more than the manual dexterity to open the lens cover and shutter button, and enough visual acuity to frame your shot.

The AF-7 had shutter speeds from 1/45 up to 1/180. Apparently the manual specifically warned you not to use slide film. This is a camera definitely trading on the outsized size of its viewfinder rather than anything special under the skin.

That said, the desire to actually shoot with it is half the battle with these point-and-shoots, and the AF-7 produces perfectly reasonable images. What’s more, it’s fun to use.

The Hanimex 35HS was one of a slew of simple compact cameras produced by Haking, the owners of the Halina brand. Made in Macau, it’s almost as simple as cameras can get, notwithstanding that it has a changeable aperture (f/5.6 to f/11) and a battery-powered flash. The 35HS has a single shutter speed and a lens that’s firmly in the flare-and-fall-off toy camera category.

That said, even single-speed, toy-adjacent compact cameras have their day. I tested the 35HS on a walk around central London in bright summer weather, and found its lo-fi aesthetics pretty appealing. These cameras can be picked up for next to nothing online, and have a better spec than the fleet of simple-use cameras currently being produced, none of which will open up as wide as f/5.6.

The original Trip 35 was in production for more than a decade-and-a-half, and sold more than 10 million units. The Trip name had become so synonymous with cheap-and-cheerful compact cameras that it was no-brainer for Olympus to continue the name into the 1980s and 90s. In fact, the MD3 – released in 1998 – is the last camera to carry the Trip name.

The Trip MD3 is typical of this generation of cameras, which continued the original Trip’s ethos of portability and ease of use, even as they did away with the robust metal construction and its selenium-powered metering system.

The Trip MD3 offers sophistication with one hand and limitation with the other. Instead of the original Trip’s two shutter speeds (1/200 and 1/40), this camera is limited to just one – 1/125. There’s an easyload system (remember, this isn’t a camera aimed at the enthusiast crowd) and a battery-powered flash and exposure system. What’s more, you can actually turn the flash off if you want to. You’ll need a steady hand though, thanks to that shutter speed.

One department this camera doesn’t shirk in concerns the lens. It’s proper glass and impressively sharp for something very much at the beginner’s rung on the camera ladder.

Perhaps taking their lead from Canon’s AF-7, Olympus too entered the oversized-viewfinder compact game, notably with this Trip from the mid 1990s. The XB3 bears little resemblance to the camera which created the famous Trip name, all rounded plastic corners and a giant viewfinder. There’s no autofocus either – the XB3 is fixed focus like a disposable or a myriad other cheap compacts, and has a fixed 1/100 shutter speed and a fixed aperture of f/6.3. The batteries needed power its exposure system and the integrated flash. There’s even a self-timer function, should you be in selfie mood.

Olympus no doubt created this camera for the burgeoning middle class in Asia and elsewhere in the 1990s, and it’s very much a point-and-shoot with little creative control. Definitely an inferior cousin to the Canon AF-7, but still capable of making perfectly fine images on a sunny day.

Mobile phones, fridges, flat-screen TVs, and vacuum cleaners: all have won the Samsung name. But film cameras? The giant Korean conglomerate might not have become a major force in film camera manufacturing, but in the 1990s and 2000s it produced a large number of compacts (and even one 35mm SLR, the SR4000). The AF Slim Zoom was one of its higher-spec compact cameras, derived from the fixed-lens AF Slim on the early 90s. The AF Slim Zoom has both a 35-70 zoom and an impressive list of modes that elevates this from curio to classic.

This camera has a large and easy-to-use top display, which shows you any active modes. The flash can be set to auto mode, red-eye reduction, fill-in or turned off if you want to reply on natural light. The autofocus is nice and accurate and the lens is impressively sharp, and the camera’s impressive list of features allows a lot of creative control. Underneath its somewhat unexciting plastic chassis sits a ridiculously good camera.